At its core, HBO’s Euphoria, which debuted on June 16, is a teen drama. The main characters are all in high school. They go to raging summer parties. They drink and do drugs. They have sex.

But putting these teen drama pillars aside, there’s a lot more to this show.

The Euphoria pilot featured trippy visuals, creative storytelling, and a giant cast of intriguing characters. It was disturbing and shocking at times but with surprising moments of humor sprinkled in (Rue showing us why she doesn’t drink and bike might have been my favorite) to keep things from becoming too dark. And the level of weirdness was high enough to make me want to see what happens next. The eight-episode Euphoria, based on an Israeli series by the same name, looks promising.

The events in Euphoria are narrated by 17-year-old high school student Rue (Zendaya), who is, to put it lightly, dealing with a lot.

Early in the Euphoria pilot we see Rue returning home from rehab with no intention of staying clean. Almost immediately, she goes to see her dealer, Fezco, who hints at a new girl in town, looking all “Sailor Moon and shit” and like someone who Rue would be friends with. This new girl would be Jules (Hunter Schafer), who Rue eventually meets at a party.

It’s easy to think that Euphoria is a flashing neon sign of Sex and Drugs. However, beneath this surface, a clear common thread running through the characters is pain, and how these characters deal with their pain.

Rue was born three days after 9/11, basically setting a metaphorical dark cloud (perhaps a little too on the nose?) over her life right from the beginning. At a young age was told she had obsessive compulsive disorder, attention deficit disorder, anxiety disorder, and possible bipolar disorder. In addition, Rue’s father died from an illness when she was a kid. To escape her pain and anxiety, Rue turns to drugs—pills, coke, alcohol, psychedelics. We learn that Rue went to rehab after an overdose, and throughout the pilot episode, she describes the act of passing out—two seconds of nothingness—as a positive experience, almost as a moment of peace. I have a feeling we’ll see a lot of ups and downs from Rue over the course of the season as she battles her addiction, which I’m sure will be difficult to watch at times.

We see Rue’s mother, Leslie (Nika King), in pain as well, with a troubled daughter and the loss of a husband. She is happy to have her daughter home from rehab but at the same time is also worried of a relapse. After a fight and demanding that Rue take a drug test, which Rue cheats with her friend’s urine, Leslie looks away from the warning signs and lets her daughter go out to the party. She wants to trust Rue, but I’m sure she has been burned dozens of times before. The negative drug test lets Leslie drop her guard at least for a short moment.

For Jules, the “new girl in town,” we don’t yet know as much about the source of her pain. Her parents are divorced and her father has sole custody, so it sounds like there’s a background story involving her mother that we will likely learn about. It is safe to assume that part of Jules’ pain stems from her being transgender and struggling with her identity. We see Jules meet a stranger at a seedy motel, and the older man, whom she met on a dating app, is married with children (one of them being Nate, a football jock that goes to school with Rue). Jules is clearly trying to figure out who she is. Her face lights up when the man says she is beautiful, before he commits statutory rape. Afterward, Jules looks numb and empty. Euphoria clearly will be using certain moments to shock the viewer. This scene is one of them, and it was hard to watch. 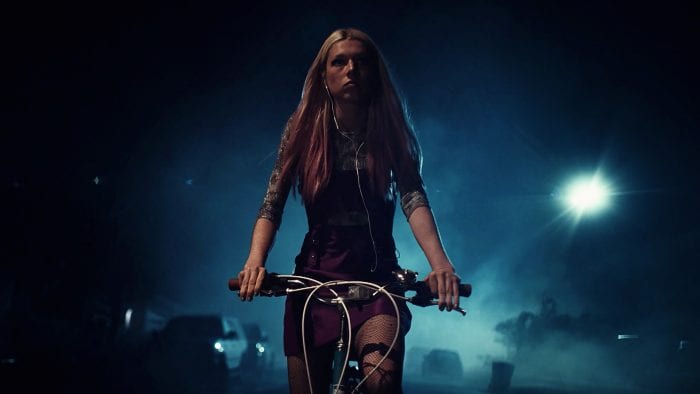 After the traumatic motel experience, Jules heads to the party, where she threatens to slice up a drunk Nate (Jacob Elordi) with a knife (at this point we don’t know—and she doesn’t know—that it was Nate’s father, Cal, who raped Jules), when he corners her in the kitchen, demanding to know who she is. And then Jules finally meets Rue. As the two head back to Jules’ house together, it’s clear that a special friendship is forming. One that I’m hoping will help these two characters find peace from their pain.

Part of what I loved about the Euphoria pilot was the nonlinear storytelling. Rue is narrating the events from the future—for example, she talks about how Jules has told her things, but it’s before the two have even met in the current storyline. It kept me on my toes, trying to piece everything together, and I do always enjoy the potential for a unreliable narrator situation. The moment when Rue said “And then…the night got weird” was great, as a handful of very twisted occurrences had already occurred in the episode. I look forward to these narrator techniques continuing throughout the season.

Another promising aspect of the Euphoria pilot was the sheer number of characters we were introduced to. We have met the two strong leads in Rue and Jules, but there is a huge opportunity for other characters to shine as we become more familiar with them. This is what will make or break this show. I also like that almost all of the actors are relatively unknown (aside from perhaps Zendaya, who starred in Spider-Man: Homecoming and The Greatest Showman). It’s a bit of a funny contrast from the star-studded cast of fellow HBO drama Big Little Lies, airing on the same night.

Being a teen drama, we can expect to see certain topics covered, such as bullying, sexual assault, and social media. And I’m sure we’ll see a lot of drug use and battles with addiction. Thus far, Euphoria is a visual treat with a clever storytelling method. As long as there are a high number of characters for us to pull for—and the groundwork for that has been laid in this first episode—I think Euphoria could be quite the experience.