In the pilot episode of Euphoria, we saw a number of the characters trying to deal with what life has thrown their way, through almost exaggerated displays of drug use and partying. In Episode 2, “Stuntin’ Like My Daddy,” the show begins to fill in the gaps by looking backward into the past.

The episode kicks off with Rue (Zendaya) narrating some backstory about Nate (Jacob Elordi), explaining why his father, Cal (Eric Dane), might be meeting an underage transgender girl in a motel room—and how growing up with a father who would do that might have an effect on him. Rue tells us that when he was 11, Nate found a collection of videos in his father’s study that show Cal having sex with underage boys and transgender girls, similar to what we saw with his encounter with Jules. Nate stares at the videos, confused, but continues to watch them.

At first I thought Euphoria was going for more shock value with this opening scene. But then it eventually became apparent that the depiction of Nate’s past shows us some of the reasoning for his actions throughout the episode.

After the initial scene with Cal’s videos, we see Nate growing up as someone focused on perfection. He must be strong. He lifts weights obsessively. He becomes the quarterback and captain of the high school football team. When things aren’t perfect for Nate, he clearly lets his anger get the best of him. In the pilot episode Nate flips out after seeing his ex-girlfriend Maddy having sex in the pool with another party-goer.

That anger follows him into this episode as well. After “forgiving” Maddy for sleeping with Tyler (Lukas Gage) at the party (by convincing her to admit she was blacked out and didn’t remember having sex in the pool), Nate sneaks into Tyler’s apartment and beats him within an inch of his life. He sees himself as a protector of Maddy; he tells her he would kill anyone who tried to hurt her. Nate is a ticking time bomb, with a whole lot of confusion and anger bubbling under the surface. 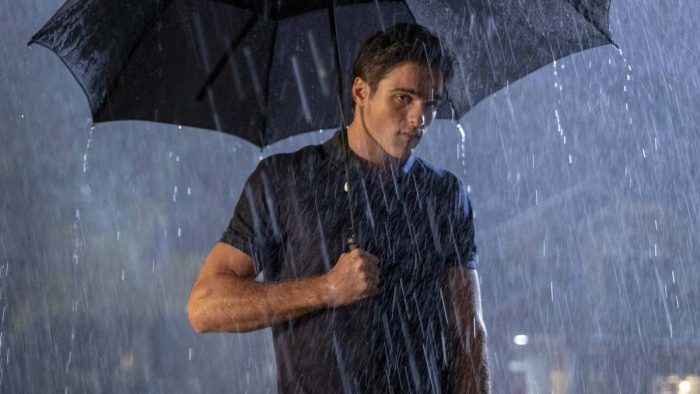 And with all this in mind, we learn at the end of the episode in this week’s twist (is there going to be a twist like this every episode?) that Nate has been messaging Jules (Hunter Schafer) through the same app that brought her in contact with Cal. It’s unclear whether Nate is looking to get even with Jules for threatening him with a knife at the party. More likely, he’s interested in the fact that she’s transgender. I do wonder, though, how Nate was able to figure out he was talking to Jules through the app, assuming she’s using an anonymous user name. I fear for Jules and the inevitable meet-up between the two, and this development brings forth a couple questions: Did Cal record his encounter in the motel with Jules? (I assume yes.) And if so, has Nate seen that video yet? That I’m not sure about.

“Stuntin’ Like My Daddy” also gives us more insight into Rue’s past. And similarly to Nate’s story, one of the main scenes of Rue’s flashback involves her father. We learn Rue took Oxycontin for the first time at the age of 13, lying in bed tending to her sick, dying dad and sneaking one of his pills. It’s really tragic that this touching moment is basically what led Rue down the path of her drug addiction. Equally as tragic, we see scenes sprinkled in of Rue’s overdose, her time in the hospital, and fights with her mother after the overdose but before rehab.

Rue’s drug-riddled past transitions into the episode’s most intense moment, as she heads to Fezco’s place looking to score something. Unfortunately for her, Fez’s supplier shows up. And he is clearly not somebody to be messed with. In some unpredictable exchanges reminiscent of Tuco in Breaking Bad, Mouse forces Rue to take fentanyl (“Please God do not let me die tonight”) and makes Fez pay for it. Luckily Mouse doesn’t do any further damage before he finally takes off, but the scene had me holding my breath.

Two episodes into Euphoria, and I’m still trying to make up my mind about this show. I’ve had the same general experience watching each of the first two episodes: five minutes in I’ve said to myself, “I’m not sure I like this show very much.” But then by the end of the episode I am invested and want to see what happens next. I’m still enjoying the method of out-of-order storytelling, and the colors and visuals of the show are absolutely gorgeous. I like the friendship of Rue and Jules, and I very much find myself rooting for both of them being able to help each other rise above their pain.

However, not all aspects of Euphoria are working for me. Some of Rue’s narration can be on the lame side, like in this episode where she says about Nate: “He liked that Maddy was a virgin, that no guy had ever put his penis in her.” As much as I appreciate the clarification on the definition of being a virgin, I had to roll my eyes at this one.

Some of the potential I saw in the pilot for the secondary characters to take a step forward didn’t materialize much for me in this episode. The McKay and Cassie storyline hasn’t grabbed my interest yet (although I’m mildly curious as to whether someone else was texting from McKay’s phone at the end of the episode). Same goes for Kat’s storyline. It’s looking like each episode may focus on one of these secondary characters. In a way, Euphoria reminds me of a way-over-the-top-shocking 13 Reasons Why, which in its first season also focused on a new character in each episode. When done well, this technique can really work. I’m curious to see if Euphoria will be able to pull it off.