Fans of Netflix’s Dark know that everything is connected across time and space. The present changes the past, the past changes the future, and it’s all one never-ending dance (even if the dancers don’t know it). In light of Season 2, the Season 1 plot twist that Mikkel Nielsen was also Jonas’s father, Michael Kahnwald, seems almost quaint. What we learned in Season 2 about the Doppler family lineage absolutely boggles the mind and can be hard to wrap one’s head around.

In short, Charlotte Doppler’s daughter, Elisabeth, is also her mother. Charlotte is the child of Elisabeth and Noah (though exactly when they had her, and how she ended up in Tannhaus’s care, is still unknown), and Elisabeth is the child of Charlotte and Peter. This makes Elisabeth and Charlotte each their own grandmothers and granddaughters. They exist outside of time—the ultimate chicken versus egg scenario—and are part of what Charlotte’s adopted grandfather H.G. Tannhaus explains as the bootstrap paradox.

In S2E3 (“Ghosts”), ‘80s Claudia visits Tannhaus at his shop on June 23, 1987. She brings a copy of his book, A Journey Through Time, and Tannhaus explains the paradoxical nature of the book to her:

In a bootstrap paradox, an object or information from the future is sent back to the past. That creates a never-ending cycle in which the object no longer has any real origin. It exists without ever having been created. Put simply, this book has traveled back in time. It found me before I even wrote it. It’s all a question of origin. Where is the beginning? When is the beginning? Is there a beginning at all?

Throughout Seasons 1 and 2 of Dark, there are several examples of the bootstrap paradox. In addition to Tannhaus’s book, there is the time machine device that he builds. The paradox of the machine is that he only knew how to successfully build it because the final version was brought to him. He received the original diagram of the machine from elder Claudia in 1953, and he worked on that version of it for years, though it never worked. It was only when Jonas (as The Stranger) brought him the old, completed version (and the final key ingredient—the vial of Cesium-137), that Tannhaus was able to complete a functional machine. He did not understand how the device he built worked until a version he’d built was brought to him, therefore the device has no real beginning. It is a device that controls time and exists outside of time.

The book and the device are objects, and it’s easier (though not easy) to comprehend that they could exist as paradoxes. What is far more difficult to wrap one’s head around is that Charlotte and Elisabeth Doppler are living versions of the bootstrap paradox. They exist in an infinite mother-daughter loop. They are impossible, yet they exist and both play crucial roles in the events that unfold in the series.

Thinking about the Charlotte-Elisabeth paradox and what that family tree looks like got me all worked up, so I created an all-encompassing Dark family tree that shows how everyone is connected (and everyone is related). I should note that I have based this family tree on what we know as fact, but also on two things which I believe to be true but which are, to this point, just theories. 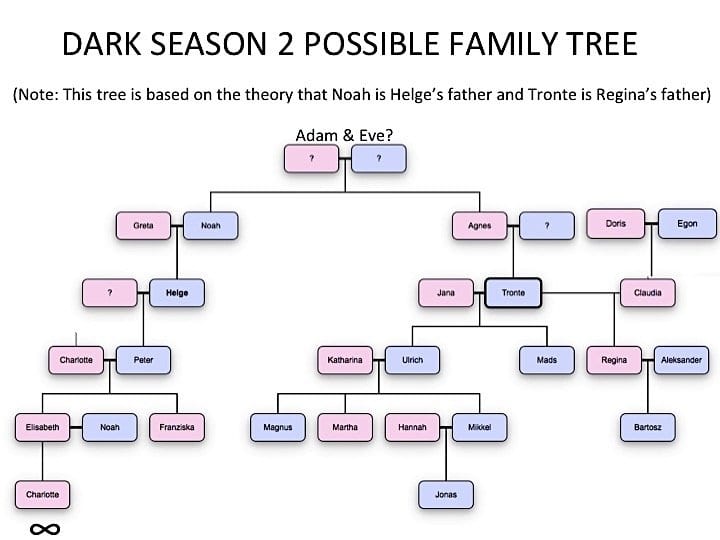 As you can see above, my first theory is that Regina Tiedemann (whose paternity has never been mentioned or even alluded to on the show) is Tronte Nielsen’s daughter. This is not that far of a reach considering Claudia and Tronte’s longstanding relationship and the fact that they were having an affair. The second theory is a bit more far-fetched, but it makes sense given some of the evidence the show provides us: I believe that Noah is Helge Doppler’s biological father.

In S1E9 (“Everything Is Now”), Greta Doppler speaks to Noah on November 11, 1953—the day after young Helge was attacked by 2019 Ulrich and left for dead in the bunker. During this conversation, Greta speaks with Noah (who is there as her priest) and some interesting facts are revealed.

Greta: I prayed to God to get rid of the child before it was ever born. And after I had him, I prayed every day that something would befall him. Because he may not be Bernd’s child. Because maybe he wasn’t a child created out of love, but…That’s what’s in my head. Every day. I can’t escape it. It’s my fault.

Noah: We are all full of sin. No pure human being exists. But no matter what we do, we never fall any lower than into God’s hands.

Noah: God sent me to you. Did he not? We don’t meet the people we meet by accident. We touch the lives of others and are touched ourselves, and thus God’s hands guide us to our true destiny.

Before Season 2, I believed that Greta was referring to a scenario in which Helge was the child of rape. However, given what we see in Season 2, I’m no longer convinced that is the case.

At this point, given the theme of mysterious and complicated parentage that runs throughout the show, I am fully convinced that Helge is not Bernd Doppler’s child. But I now believe that when Greta trails off after saying Helge may not be a child created of love, I think what she left out was the possibility that he was a child of lust. For the devout Greta, lust is an unforgivable sin. She would blame herself for it and consider any child born from it to be a child born of sin and, thus, inherently sinful. It explains why she is so cold to Helge; he is a reminder of her own sins and she believes that, due to his origin, he is the physical embodiment of the evil she did.

In S1E10 (“Alpha and Omega”), the child Helge is sent from 1953 to 1986 through the bunker portal. Here he meets Noah, and over the course of the next few months (from November 12, 1986 to June 23, 1987) Noah takes care of him and initiates him into the fold of Sic Mundus. He prepares him for his life’s work as one of the most essential parts of the grand scheme, though young Helge has no idea what his future self will be asked to do.

In S2E3 (“Ghosts”), we see that Noah is somewhat paternal with Helge. As he straps him in to the bunker chair time machine—the first version that actually works—Noah tells Helge:

I’ve seen you grow up. Become a man. The whole cycle of your life. Time chose you. God chose you. Don’t forget that we are your home now, too. No harm will come to you. We’re watching over you. Time is always with you. Wherever you go. You carry it in you. And it carries you. It sees and hears everything that you do and say.

He then sends Helge back to his own time; Helge returns to his home on June 23, 1954, and is greeted by Greta who, for the first time, actually displays some emotion and love towards her son.

There is a scene, after Helge has returned home, where Noah comes to the Doppler home at Greta’s behest. Helge has not spoken since he disappeared and Greta—always ready to believe her son is evil—is concerned that he may be possessed by the devil. When she calls Helge downstairs and he sees Noah, he runs to him and wraps his arms around him. Noah is the only one who can get Helge to speak. At Noah’s request, Helge reads a Bible passage aloud. He does not seem intimidated or scared of Noah. Instead, he treats him as he would a father.

After Helge speaks, there is palpable chemistry between Greta and Noah, both in the way they look at each other and in their physical gestures. Noah takes Greta’s hands in his, and places Helge’s hands in as well—as a father, mother, and child might do.

Of course, this could all be completely wrong, but I think there is enough evidence to at least consider the possibility. After all, Dark doesn’t do throwaway scenes or lines. The writing and plot are tight; everything is significant and everything is connected.

So what does this all mean for the Four Families of Winden? It means that everyone is related: the Dopplers, the Nielsens, the Tiedemanns, and the Kahnwalds. With Noah and Agnes Nielsen being brother and sister (and if my two theories are true), it means that every single one of our main characters are related (either by blood or through marriage). In my entire life I’ve never been able to wrap my head around the whole first/second/third cousins and levels of removal thing, so I’ll leave it to those who understand it to figure out the exact relationships between characters, but whether they know it or not, all our main players are connected.

But the question remains: who are Noah and Agnes’s parents? If Noah and Agnes are the key to the lineage of the Four Families, where did they come from? Are Noah and Agnes like Adam and Eve—born from nothing, outside of time—or could Adam truly be the first man? And if that’s the case and Adam really is Jonas’s final form (though I am not entirely convinced that is true), then who is his Eve? The obvious choice would be Martha, but that’s perhaps too obvious for the notoriously twisty Dark. Still, it’s fascinating to me to think that Jonas, our protagonist, could actually be the progenitor of all—the past, present, and future. The beginning and the end.