This week broke great news for all of us who have enjoyed following HBO’s Euphoria since it first aired June 16: the show has been renewed for a second season. This news comes as a welcome reassurance as Euphoria continues to develop an interconnected web of character relationships halfway through its first season. Plot resolutions do not seem viable for the complex stories that Season 1 has woven, and it is good to know that another season promises to carry these stories further.

Episode 5 of Season 1 continues the structural format of Euphoria that is by now recognizable. Each episode opens with a chosen character’s childhood background that contextualizes their current predilections and behavior. This week, we learn how Maddy (Alexa Demie) formed an identity that is based on seeking self-worth in external validation. She grew up watching her mother work giving pedicures, and she resolved early on to become like the women who came in to get their nails done, not like her mother who knelt at the foot tubs. She also observed that the women she wanted to be like did mostly nothing, so she fastened early on to the idea of passively allowing someone else to ascribe identity to her.

Ultimately, her background provides insight into her seemingly inexplicable commitment to Nate (Jacob Elordi). Most essentially, the opening sequence of this episode makes us aware that Maddy manipulates the image of herself that she presents to Nate. Knowing that Nate cares primarily about superficial appearances and their association with status, she intentionally projects his own superficial desires to get what she wants from him. Yet, this episode makes clear that this dynamic between them is deteriorating as Nate develops an uncomfortable awareness about his own sexuality and identity.

She [Maddy] never knew who she was, she just knew she had something special, and it gave her confidence.

Maddy’s abusive relationship with Nate and its origins in Nate’s complicated identification with his father provides the overarching narrative of this episode. Other major storylines are sustained in Episode 5, including Kat’s (Barbie Ferreira) transformation into a sexually confident being and Rue (Zendaya) and Jules’ (Hunter Schafer) increasingly complicated intimate friendship. Kat’s personal confidence increases with her newfound ability to experience sexual affirmation, and especially with her new knowledge of the power that sex gives her over men. However, she visibly struggles with an inner tension between her take-no-prisoners bombshell attitude and her undeniable sense of fragility and vulnerability.

There’s nothing more powerful than a fat girl who doesn’t give a fuck.

Kat’s empowering transformation and her newfound bodily confidence is bound up in a rejection of men as legitimate partners. Her crushing fear of vulnerability and abandonment, evidenced by her rejection of Ethan at the sight of him speaking to another girl, has for now precluded her ability to attain true sexual satisfaction through the communion that is sexual and emotional intimacy. As the show goes on, we will see how the tense interplay between Kat’s compulsion to buoy her self-confident sense of power by subordinating men’s desire for her and her inevitable need for authentic partnership, with all its attendant exposure and susceptibility.

In Rue and Jules’ developing storyline, Rue continues to be smitten with Jules while Jules begins to crave space from Rue. Rue’s Narcotics Anonymous (NA) sponsor, Ali, rigidly cautions Rue away from her attachment to Jules, warning her that most high school relationships are ultimately temporary. Ali’s caution seems harsh, but it is responsible with consideration to Rue’s addiction. In Episode 5, Rue continues to stay clean, but Jules is the only reason for her abstaining from opiates. Ali recognizes that Rue has essentially replaced her substance dependency with a psychological dependency on Jules.

There is not a thing on planet Earth that compares to Fentanyl—except for Jules…For now, I’ll choose Jules.

Jules, meanwhile, is still reeling from last week’s disappointing (and disturbing) revelation that Nate is the real ShyGuy118, or “Tyler.” Peculiarly, Jules doesn’t share the news with Rue. We can assume that she is either feeling threatened by Rue’s reaction, or by Nate finding out that the information has been spread, or both. Perhaps telling Rue would make the loss of what she thought was love all the more real, and she just wants to put it behind her. In any case, Jules is craving distance and independence, and she doesn’t want to be defined by Rue’s need for her. Maybe what Jules really needs from Rue is a friendship that she feels she can trust, not a romantic relationship.

The main action of Episode 5 revolves around the narrative of Nate and Maddy, which ultimately bears meaning on Nate’s complicated identification with his father. Maddy has bruises around her neck from Nate choking her in Episode 4. She tries to hide the evidence of his violence with makeup and by wearing heavy clothing, but she passes out in class and paramedics discover the bruising. This ignites a campus investigation in which the school principal interviews multiple students, and it is revealed that gossip about Nate’s queer sexual interest has been spreading like wildfire. (In previous episodes, Maddy had found pictures of other dudes’ dicks on his phone.)

Against Maddy’s wishes, her parents press charges against Nate and the police get involved. Cue the formidable Cal Jacobs (Eric Dane), Nate’s father, who retches upon arriving at the school and seeing police out of fear that his clandestine affair with Jules has come to light. However, when he learns they are there for Nate, Cal recovers his detached composure and counsels his son. He iteratively asks Nate, “Did you do it?” It seems as though they both know the truth—that Nate did choke Maddy—but Cal has trained his son well enough in the importance of keeping up appearances for Nate to hesitantly respond “No” each time. 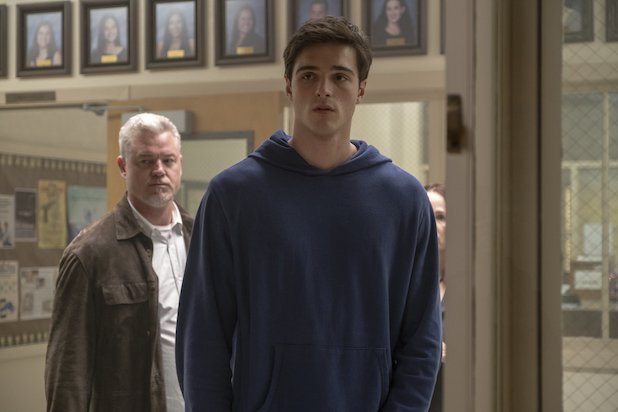 Later, Cal accompanies Nate while he is being interrogated by the police. As Nate expertly applies his narcissistic skills at gaslighting, manipulation, and deceit to construct a positive image of himself for the police and to deflect suspicion away from himself and onto his victim (Maddy), Cal looks on with silent approval. It is explicitly implied that Cal has raised Nate to control the impression of himself that he puts off to others, and that training in tailored self-representation has paid off greatly in this situation. In cases like these, when reputation and status are at stake, Cal and Nate know that the truth doesn’t matter. Preserving a pristine public image is what matters.

This skewed father-son method of identification gives us insight into the major dynamic that fuels Maddy and Nate’s relationship. Nate is trained to project a very particular image and is obsessed with maintaining this particular character. Maddy’s ability to tailor herself superficially to his idea of self-representation enables him to expand his mirroring identification with his father. This point is emphasized in the final scene of this episode, in a sequence where Nate mirrors his father’s activities at a seedy roadside motel. Just as Cal pulls away from the motel, Nate pulls in driving a nearly identical truck; he then walks past the woman that Cal just hooked up with as he goes to visit Maddy.

I spent my whole life trying to keep this part of me separate, but I feel like it’s poisoned everything.

Cal, however, seems to be developing an awareness of the toxicity of his duplicitous self-identification. He explains to the woman that he meets in the motel that he believes his repression of his sexuality and parts of his identity has instilled feelings of rage in his sons. Cal’s growing awareness and his sensibility for reflection as compared to Nate’s compulsion for unrestrained violence is also mirrored in their respective confrontations with Jules at the end of Episode 4. In coming episodes, we will see how conflicts between Nate, Jules, and Maddy develop. We will also find out if Jules and Rue’s friendship will survive the pressures of romantic attraction, or if Rue’s sobriety will outlast her attachment to Jules.

Rebecca is Managing Editor of Horror Obsessive at 25YL Media. She is an academic librarian with a background in literary studies, comparative literature, and film studies.