The horror genre is no stranger to supply and demand. When people need to see a challenge of the social conventions and political machinations of the world we live in, some directors, writers, and creators rise to that challenge and create compelling, and often controversial, works of art, using terror and fear, mostly with supernatural occurrences and lots and lots of blood, to speak to our souls.

And sometimes we just want to see people die really horribly and laugh about it.

In the case of Puppet Master: The Littlest Reich, Fangoria, the horror-magazine-cum-studio, is our pusher, providing us thought-free, puppet-causing mayhem sure to make you go “ew”, “oh”, and “yes!” all at once, hopefully with a beer and a friend in tow.

The thirteenth entry in the Puppet Master franchise, The Littlest Reich is unlikely to be described as a work of philosophical expression pushing the boundaries of rhetorical thought. However, it does make art of creative, brutal murder at the hands (or knives) of twelve-inch tall little wooden dudes. The most challenging thing the film presents its audience is if they can keep their lunch down while watching. 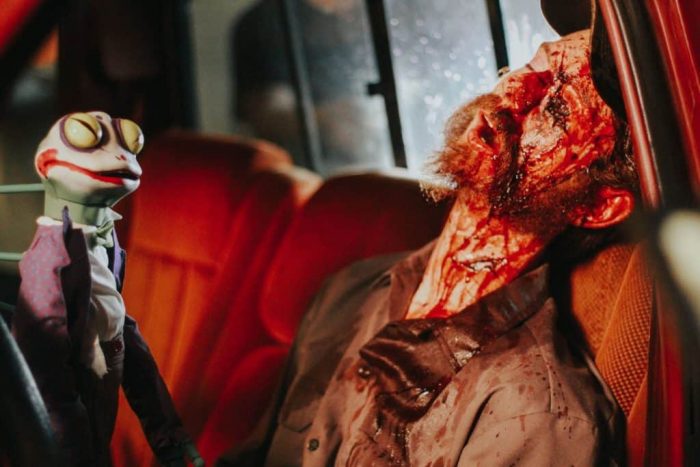 Functioning as a soft reboot, The Littlest Reich has all the elements of prior Puppet Master films. A multitude of unique killer dolls, each with their own gimmick? Check. A bunch of hapless victims-to-be stuck in a low star hotel? You got it. Copious amounts of female nudity existing expressly to not advance the plot? Why, of course!

Now I will admit I am not the world’s foremost expert on the Puppet Master universe, but I have enjoyed them plenty. Despite some gore and lots of death, they certainly felt kind of charming. I always felt like the tongue was planted firmly in the producer’s cheek while churning out sequel after endless sequel. A truly good purveyor of schlock knows you can’t take the concept of serial killer puppets too seriously.

However, while you might see some familiar puppet faces in The Littlest Reich, such as Blade (the one with the white face and trench coat ensemble and, well, blades), Pinhead (the massive brawler with the super small head), Tunneler (the one with the drill on top of his head), and Torch (he has a flamethrower for a hand and looks like he came off of a Slayer album cover; renamed Kaiser in this film), they are fundamentally changed and, likely, not your dad’s Puppet Master characters.

Stripped of any backstory and purely evil–seriously, not even cute evil–these puppets outer bodies exist purely for familiarity sake and nothing else. Lacking some of the charm they had in other films, these OG facsimiles are joined by other strange and, frankly, damn creepy rookies, such as Mechaniker, a metal knight thing, Happy Amphibian, a frog puppet that kind of doubles as a clown too, just to add more chills to your spine, Autogiro, a robot-esque puppet with a propeller for a hand, and Mr. Pumper, a puppet that–I actually have no idea. Don’t ask.

Because The Littlest Reich devotes so much of its time to make the puppets themselves as evil and cruel as possible (though this excessive cruelty does not strip them of their creativity with taking lives), the movie must rely on its human characters to provide the humor and sympathy.

Usually, that seems like a bad idea. Most long-running franchises exist to see the established baddies off a bunch of throw-away do-gooders because that is just so much more fun. But the puppets in The Littlest Reich are so damn decadent in their murder (I’m trying not to spoil the reveal, but I think the title will probably give it away if you look at it for more then two seconds) that you have to root for the presumed victims. 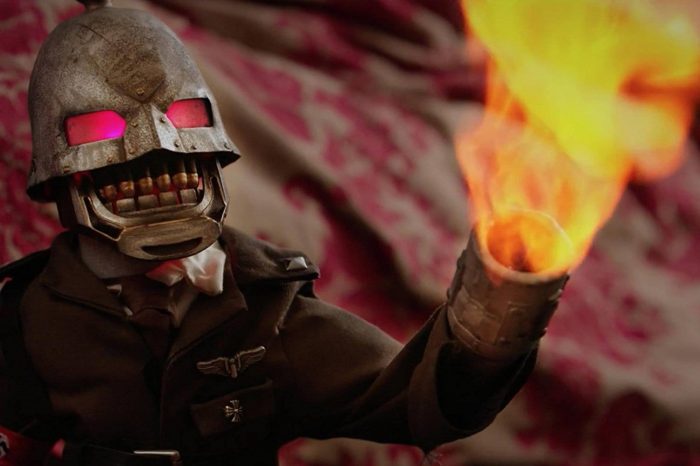 Leading the charge is the dry Thomas Lennon, one of those “oh, that guy” actors you see in many a production. Lennon plays Edgar, a struggling comic book artist who returns to his parents’ home after a rough divorce. Edgar’s brother James accidentally died when he was very young and his parents have never been the same, often taking out their frustrations and disappointments on Edgar. One night, going through James’ stuff, Edgar finds a unique puppet, seemingly handcrafted, that has a trenchcoat and very sharp knives embedded in the arms.

After researching its origin, Edgar discovers this puppet (Blade) was made by noted serial killer (and doll enthusiast) Andre Toulon (Udo Kier) and a convention in Oregon (at the hotel where Toulon met his fate years before), is selling and auctioning off Toulon’s creations, which have become infamous collector’s items. Realizing he may have a nice little payday coming, he decides to take his new girlfriend Ashley and his boss Markowitz with him to sell the doll and meet some interesting characters.

When they arrive at the hotel, the guests are certainly diverse and perfect for puppet related annihilation, for as soon as night hits (and most of the characters are, or are attempting to have sex), all the puppets come alive and wreak havoc. An unexpected hero, Edgar, along with police officer Carol Doreski (Barbara Crampton), lead the charge against the marauding puppets all while finding out a ghastly secret regarding their origins.

No matter what you think going into Puppet Master: The Littlest Reich, it will deliver in some way. This isn’t the movie you accidentally rent on Amazon Prime. You are either in to see some horror, some well-known puppets from a beloved franchise, or both. Nothing should surprise you, except maybe the filmmakers capacity for depravity.

Co-directed by Sonny Laguna and Tommy Wiklund, horror vets for most of the ’10s, and given some indie cred with a screenplay by S. Craig Zahler (no stranger to gruesomeness), The Littlest Reich chooses not to break any established horror conventions or subvert expectations. You get what is advertised, plain and simple. Made on what likely was a very low budget, the creativity had to remain with the kills and the gore, not expansive world-building. And boy oh boy, does the budget so ever deliver on offering those kills and that gore!

Just like I don’t want to spoil the plot, such as it is, I also feel like giving away too much of the kills, the true heart and soul of the picture, will certainly ruin the fun. Needless to say, you aren’t safe on a toilet, in the shower, having sex, and if you are pregnant. Seriously. Don’t be pregnant in this universe.

The core cast, led by Lennon, is pretty solid. While there isn’t a lot required of an actor in a film like this other than to be scared and funny, there are some surprising moments. The lovely Barbara Crampton—as the cop who helped killed Toulon many decades past—plays a certified badass. While the comedic relief—the comic shop owning Markowitz, who has one hilarious scene discussing the metal genre with Edgar—ends up becoming a sympathetic character with the most emotional pull. As you can tell by his name, Markowitz takes it a lot more personal than the others when confronted with something symbolizing the Reich.

The ending of the film opens this little-franchise-that-could with the possibility of a sequel and a title, Blade: The Iron Cross, is listed on Wikipedia for a 2020 release. I’m all for it. If it is 90 minutes of outrageous gore, unabashed (and unapologetic) titillation, and hilarious one-liners, I’m all in for entry number fourteen.