Every other Sunday, we’ll be highlighting the best in scary audio storytelling, be it podcasts, audiobooks, radio plays, and more. This is Sounds Scary. This Sunday we’re listening to Gimlet Media’s The Horror of Dolores Roach.

In the last gasps of the 19th century, a small theatre in France began drawing massive crowds for wanton displays of death, gore, and melodrama. Built from a converted church, the Grand Guignol became the locus for a century of bloody art in Europe. England spilled its own blood with wildly popular sordid stories known as penny dreadfuls. Between the covers of these books, villains like Spring-Heeled Jack and Sweeney Todd carved their way through the slums of London, giving the disenfranchised a mythological architect of all their woes. 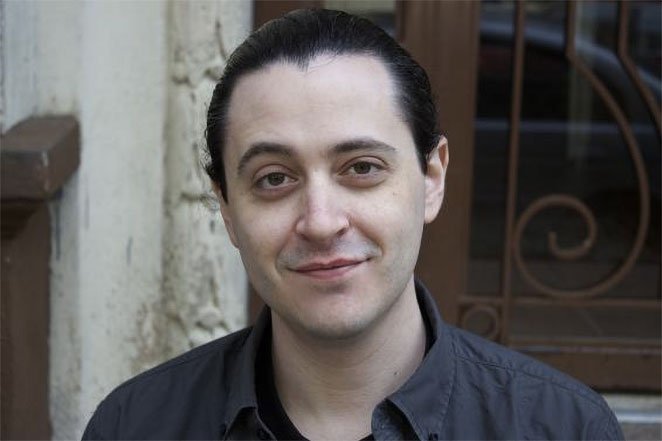 The bloody miracle of these traditions is their ability to persist, to stand tall against the constant erosion of time. These stories still keep us up at night, shifting and changing to hide in whatever shadows darken the modern age. This malleability is how the titular barber of Stephen Sondheim’s Sweeney Todd can slash and carve his way from Victorian villain to musical (Sweeney Todd: The Demon Barber of Fleet Street: A Musical Thriller) to Tim Burton-directed film and beyond.

Somewhere in that beyond exists this week’s Sounds Scary, the dramatic, violent, and frightening The Horror of Dolores Roach. Written and directed by Aaron Mark, the series explores dark themes originally explored in a one-woman show entitled Empanada Loca. It was then adapted into 8-episode podcast by Gimlet Media. The series follows ex-con Dolores Roach (Daphne Rubin-Vega) after she is released from a 16-year prison sentence when she returns home to Washington Heights.

What follows from that premise is a story of murder, massage, cannibalism, and empanadas. Since I love all of those things, this podcast was a delight. This reckless mingling of sex, violence, and comedy summon the blood-drunk spirits of the Grand Guignol and penny dreadfuls while living comfortably against the backdrop of a rapidly gentrifying New York City. The Sweeney Todd parallels playfully stitch into the length of the series. Sweeney had the iconic meat pies of London and the wicked Mrs. Lovett. The Horror of Dolores Roach gets Luis (Bobby Cannavale) and his neighborhood restaurant Empanada Loca. Rather than a barber with shaves and haircuts, Dolores gives under-the-table massages with the nickname “magic hands.”

The Horrors of Gentrification

The plot meditates on one of the less-explored aspects of Sondheim’s narrative: the 16-year absence and the way it can change a neighborhood. When Dolores returns to Washington Heights at the beginning of the series, she marvels at the Starbucks and Planet Fitnesses that replace her familiar landmarks. She also weeps in the bathroom of her old apartment, after being invited by its new owner. Of course, those owners are a white hipster couple and their cat. Alone in a world that left her behind, Dolores hides in her friends crumbling empanada shop. The bitter pain of Daphne Rubin-Vega (Spaceballs: TheMovie)’s performance as Dolores breaks the listener’s heart. Each disappointment, surprise, and moment of joy is a tangible, physical feeling. Shes’ the blood with which The Horror of Dolores Roach is written.

The series also harkens back to its penny dreadful roots with its music. The score, composed by Allison Leyton-Brown, employs anachronistic music full of ominous piano and violin. Rather than employ a modern score and reinforce the setting, the music highlights the narrative context. This gives the story a connective tissue to its past retellings. Though the story deals with modern anxieties of gentrification and urban renewal, it’s ultimately the story of abandonment and survival. That kind of story easily sails the seas of time.

With equal parts radio play and campfire story, The Horror of Dolores Roach captivates and terrifies its listeners on a tightrope of melodramatic plot and real human characterization. It’s well worth a listen for those with a strong stomach for cannibalism and a real passion for empanadas.