Recently Paul Thomas Anderson, who is of course famous for films such as Magnolia and The Phantom Thread, teamed up with Thom Yorke of Radiohead in order to create the Netflix original film Anima.

It isn’t the first time they have collaborated, but there is something distinctive about the project. As opposed to being something that qualifies simply as a music video, or something that can be straightforwardly thought of as a film, Anderson and Yorke have here created something in between.

It was marketed as a “one-reeler” with callbacks to the silent film era and the likes of Buster Keaton. But this seems a bit off as well, as the story of Anima is not immediately clear either. That is, it’s not clear what exactly is happening as the film progresses, or why.

The film is a mix of contemporary dance, Thom Yorke songs, and the beautiful cinematography/direction of Paul Thomas Anderson.

It is a striking thing, but what even is it about?

Anima is the term that Carl Jung used to pick out what he thought of as a feminine aspect of the masculine Unconscious (with animus being used to pick out the same thing vice versa). One could certainly interpret Paul Thomas Anderson’s film along those lines, and that might be interesting, what with the woman played by Dajana Roncione representing some aspect of Thom Yorke’s Unconscious, or something like that.

This is an experimental film, to where its surface-level meaning is already up for debate.

We open on a shot of the subway tracks, as a train barrels down them. Inside, people are basically asleep. They are zoned out from the world, as one often is on such commutes, not paying attention to others but in a certain kind of reverie.

Thom Yorke’s character is not excluded entirely, but he seems more between sleep and waking than the others. And the same goes for Dajana Roncione’s character. They aren’t fully zoned out but have some level of awareness.

She looks at him, and he feels it. They don’t make eye contact, but this is one of those instances where the gaze of the other is felt upon you, which is weird if you think about it. And so he looks at her, but now her gaze has turned. We are back to the subway car full of people mindlessly going about their commutes.

They begin to dance, and Yorke is at least somewhat involved in this. It represents their communal experience, though it isn’t really one to be celebrated. Everyone is mindlessly going about their day, going through the motions of being human, but without really connecting to anything.

Who are these people?
I’m in black treacle
Cue the sliding violins
In sympathy

He sees an object. It doesn’t really matter what it is, except that making it something like a lunch pail helps it serve its symbolic function. We wonder what is inside. But that isn’t really the point. The point is that this object captures his attention and begins to awaken him from his stupor.

It serves as a symbol for any object whatever—money, for example—that might grab a person and give them a sense of purpose. I want the thing, here is the thing and I’ve grabbed it. Now he is no longer in the shared stupor of his fellows, but mimicking their movements to try to get through their mass.

But he hits an impasse, perhaps because he is faking it. He’s no longer going along with the flow of the masses but is focused on this thing he has procured for himself. And so he hits a barrier.

And as he moves back to prepare himself to surmount it, the thing is taken away.

It’s caught up in that swarm of others; not because they value it, but because they don’t. It is just swept up in the movements of the masses; taken away from him but ultimately discarded.

As he searches for it, he encounters lines of people who don’t value this unique thing. They move together in rhythm, perhaps waiting for something that is ultimately meaningless.

He climbs over walls and finds his thing, only to discover that it is being “protected” by a line of belligerent others. It’s not that they care about the thing itself. They don’t notice it, really. It’s that they press forward and want to take him up in their interminable flow, keeping him from the object of his desire.

As they infringe upon him, he starts mimicking their movements, but still with the goal of getting past them. He’s not one of them but pretends to be. Maybe this way he can make it through.

Yet they catch him in their line and hold him up. They knock his thing away whether they mean to or not.

He sees the woman above and smiles. But he’s still caught behind the line.

And he slides down the surface with the rest of them; perhaps free in his own movements, but at least mimicked by all of the others.

Railing against them, he moves against the grain, and up a surface that is slanted against him. The wind blows in his face. There is a difficulty to this movement, as it is going against all of the forces in the world that work against it. And, yet, he persists.

The others slide away, and as he sits, he is surrounded by small pieces of refuse caught up in that wind. But this is a moment of solace, where, despite being bombarded by the shit of the world, he feels like he has won.

But then he slips back down, like Sisyphus going back down the mountain after he has rolled his boulder up it. Reality, and others, continue to be there and impress upon one’s desires. And the thing he was after seems to have disappeared from the story. He got so caught in resisting “the They” (what Heidegger called das Man), that he has forgotten what he was after.

He wakes up lying face down in a grate but then finds the woman he almost connected with on the subway car. They dance, and their dance is playful. It is not like all of those dances we have seen before, where it seemed like everyone was moving in lock-step without thinking.

They respond to one another, and as others move to mimic what they are doing, they remain outside of the logic of the They. There is a joy to their dance from the beginning that escapes inauthenticity.

If you could do it all again

You don’t know how much

Their heads rest against each other and turn, and so do those of the others. , but they are pretending whereas Yorke and Roncione are authentically connected with one another. They may be play-acting in order to get through these situations, where the They mimic them, but they nonetheless stand outside of all of that—thus the way he runs after her once they have escaped the alley of others dancing like they do. 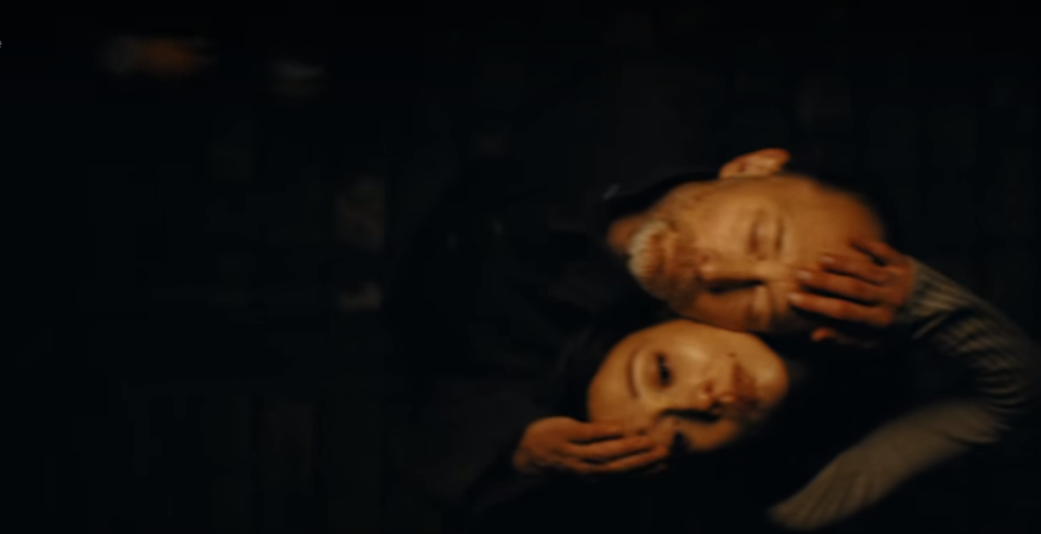 But then there is an image again of others dancing as they do in the field. What is the difference between love and a simulacrum of it?

Their mimicry on the train in the last scene stands in contrast to what we have seen before. This is the difference: between an inauthentic repetition on the surface of things, and a deeper one.’

And so if Thom Yorke falls asleep on the train again at the end, it is in a different way. Now he has found a connection with another person, as opposed to both his previous obsession with a thing and the somnambulance of the opening scenes.

He’s no longer one of the great masses of the They, not fighting against them in order to get his prize. He ends as a man who has found peace, or solace, through another.

This isn’t the story of a woman saving a man in some kind of objectionable way; it is about how that kind of connection with another human being is the most important thing.

You can sleepwalk through life, or get caught up in what They think you should do, but it is when we come together and find something that we find the deepest meaning.

That’s what can let you sleep easy, as the birds chirp and shadows pass over your face.

I take a little piece
And break it off
What’s that bloody racket?
It’s the dawn chorus

If you could do it all again
Big deal so what?

When you’ve had enough

If you could do it all again