Every other Sunday, we’ll be highlighting the best in scary audio storytelling, be it podcasts, audiobooks, radio plays, and more. This is Sounds Scary. This Sunday we’re listening to Audible Original’s Blood On Satan’s Claw. 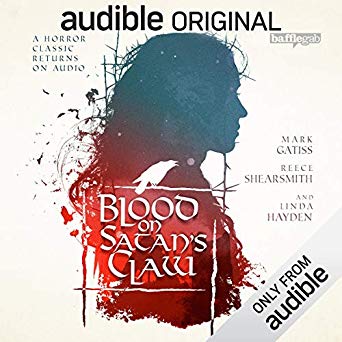 So much goes into the immersion of the movies. The dark of the theater surrounds us and the bright beacon of screen hums and shines like a space station window looking out onto an exploding star. We forget ourselves and crawl into a new world made of light and history. The dark and the light is how a movie feels like a window, a propped-open C.S. Lewis wardrobe.

Audio, however, feels like an intimate secret, a campfire tale, the hush and hiss of static feedback becomes the popping of burning cordwood. We listen closely, and the stories bloom around us—a swirling landscape of sound that builds rather than beckons. Nothing fits as perfectly into this close, almost-whispered medium like an old fashioned folktale like Audible Studios new adaptation of Blood On Satan’s Claw.

The script is adapted from a 1971 film of the same name and reads just like a classic English folktale. Against the backdrop of 1600s England, the audio drama children happen upon a strange skull in the woods. The skull, with one eye still stuffed into its socket and half of it covered in coarse black fur, begins to exert a strange influence on the nearby populace. Specifically, something begins changing about the children. What follows is a timeless battle between the Devil’s influence and the village’s squire and reverend.

While the script clings tightly to its source material, the difference in the medium is massive. We cannot see the skull, the shadows, or the violence (and there is plenty), and so we have to hear it. That hearing comes from uncanny sound design from audio production company Bafflegab and Audible Studios and subtle tweaks to the script that focuses on the description. It’s truly a feat of engineering and storytelling that transports you back to the rainy, grey Isle of Albion with every snapping twig and growling creature. Your neck practically itches with the coarse wool of period clothing.

The script, too, is a firm hand on your submerged head, drowning you in a rich, accented dialog. Adapted by Mark Morris, famous for his Doctor Who novels and scary short stories, the dialog feels authentic to the 1600s without being alienating. It reminds us that, even centuries apart, young love is still young love, repression is still repression, and the Devil is still the goddamned Devil.

The Devil, by the way, is a very real part of Blood on Satan’s Claw. Characters hear his voice, see his face, and scream in terror.

Working in tandem with this soundscape and script are an incredibly talented cast. Headed by the powerhouse performances of Sherlock’s Mark Gatiss as Squire Middleton and dependable English jobber Reece Shearsmith as Reverend Fallowfield, Blood On Satan’s Claw never breaks its spell. Other notables include Linda Blake, a star of the original 1971 Blood on Satan’s Claw, and obvious time traveler Ralph Ineson—whose voice seems made for the 1600s and no place else.

Most impressively however is the convincing teenaged characters, particularly Rebecca Ryan as Angel Blake. The satanic influence of the skull turns the children of the village into godless heathens and voices like Ryan’s decisively drive home what is lost. And what terrors take their place.

For fans of the re-emerging subgenre of Folk Horror, and titles like The Ritual (2017), Midsommar (2019), The Wicker Man (1973), and The VVitch (2015), as well as devotees of the original film, Blood on Satan’s Clawis a must-listen. There are rich, velvety sounds to fill your head and snatch you back in time. Put your headphones on, close your eyes, and listen for the crackling campfire of a well-told scary story.