It’s easy to look at the Yakuza series and dismiss it as a Japanese rip-off of GTA (I made the same mistake years ago). With the Western localization of Yakuza 0 back in 2017, the series has gathered an impressive fan base and is now being recognized for what it is: an action brawler with an engaging story, lovable characters, and a plethora of side content that could’ve been its own game. With the conclusion of Kazuma Kiryu’s storyline in Yakuza 6, the next logical step would be to create a new IP and RGG Studio has done just that with Judgment.

Similar to the Yakuza games, Judgement is set in Kamurocho, a red-light district that is much beloved by fans and critics for its detailed representation of modern-day Tokyo. The protagonist is Takayuki Yagami, a (former) lawyer, whose career is uprooted after a former client of his is caught red-handed after having murdered his girlfriend. Now in present time, Yagami is in charge of his own detective agency and takes cases from his old law firm. Agreeing to aid in the case of a vicious crime boss, Yagami soon becomes tangled up in a plot that involves a serial killer, threats from several Yakuza crime families, and a government-funded health agency. 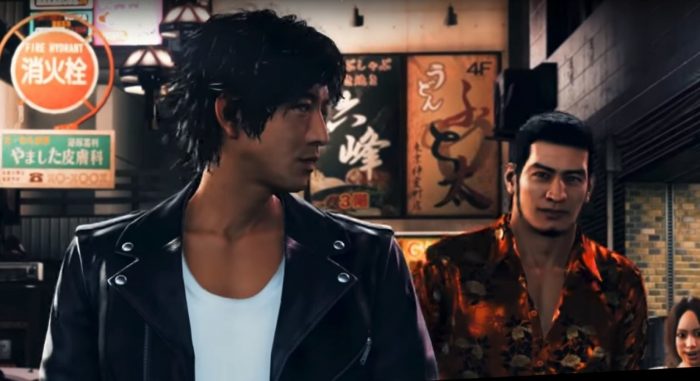 Judgment’s plot starts slow, showing how Yagami’s career was ruined in a lengthy cutscene, then flashing forward to his new career as a PI. Yagami’s disheveled, casual look in the present day compared to his slicked-back suit-wearing lawyer self in the past does a good job at showing just how far this once-promising lawyer has fallen. Those that prefer being thrown into the deep end of things from the beginning may want to dismiss this game. But, the slow start is a necessary one to set up the game’s story and characters.

Judgment’s story is constructed as if it was a television show. It starts off each chapter with a brief recap of previous events and the theme song that is played at the game’s beginning clearly takes inspiration from both anime and crime shows such as True Detective. The story is noticeably darker than the Yakuza series, being a meat and potatoes neo-noir story that involves a serial killer who gouges out his victims’ eyes.

There are a vast number of characters that are slowly peppered throughout the plot, nearly every one of them interesting and three-dimensional. There’s Kaito, an ex-yakuza who acts as the muscle on Yagami’s cases, Higashi, a former associate of Kaito’s whose hardened exterior is slowly peeled away, and Hoshino, a junior lawyer who becomes determined to prove his worth as both a lawyer and a friend.

A major staple of the Yakuza games is its sub-stories. Ranging from funny to heartwarming, these moments added levity to the games’ melodramatic storylines and went a long way toward giving Kamurocho its realism and depth. Judgment returns to this staple with side cases, in which Yagami periodically receives updates from friends on cases that require his assistance. From the cases I’ve completed so far, each one is entertaining and different from the last one. Whether it’s trying to track down a deceased man’s cat or investigating a supposedly haunted apartment, each one is unique and definitely worth checking out.

In addition to the side cases, Judgment has several mini-games located within its city. While karaoke is sadly absent (surprising given how voice actor Takuya Kimura is a singer), there are arcades that let you play vintage SEGA games (including the game’s own version of House of the Dead). There are also restaurants that offer discounts and side missions if you eat there often enough and best of all, a drone racing game where you’re able to customize your drone using components you can find off the street or buy from vendors.

Combat is divided into two styles: Crane and Tiger. Crane is mainly focused on crowd control while Tiger’s best used on an individual opponent. Anyone who’s played Yakuza’s combat before will be pleased to discover that they now have the ability to jump-kick off the walls in the event they are backed against a corner. You can buy upgrades off of a skill tree separated into three branches: Ability, Battle, and Special, using EXP points which you get from nearly everything you do in the game.

Unlike Kiriyu, the gangster with a heart of gold, Yagami is on the side of the law. The game includes a new investigative process that involves tailing suspects, analyzing crime scenes, and finding the right shred of evidence to back up your defenses.

Sadly, this the one part of the game that Judgment stumbles in. Tailing quickly becomes repetitive as you are forced to hide whenever your suspect turns around and the second they disappear out of your line of sight, a timer appears that forces you to rush (though the skill tree includes an upgrade that extends the time you are given). It can also be hard when investigating large crime scenes to locate the object you need to progress. Given how RGG Studio wanted Judgment to distinguish itself from its previous games, this implementation feels like a missed opportunity.

Overall, Judgment is a game with a great storyline filled with twists, combat that’s almost always a blast to play, and a heaping of mini-games that’ll demand your attention from the plot. If you’re a fan of the Yakuza series, or you’re looking for a way to begin, then Judgment is the perfect opportunity for you to do so.

Stay Tuned for a Second Review!

As a side note, I plan on writing a second review once I finish the campaign and unlock all of the side activities detailing my overall thoughts. In the meantime, you can check out other gaming reviews here.