Everyone at one time or another has wished that they were a Superhero. Most of those people have also wished they were Batman. However, even if someone was as skilled and intelligent as him, it would be a profession that in reality, would have a myriad of unforeseen occupational hazards, both physical and psychological. This brings us to Nite Owl. For this profile, I’ll be drawing on all available interpretations of the character, which includes the Watchmen film, original Watchmen graphic novel (obviously) and the Before Watchmen prequel graphic novels (they’re canon, whether Alan Moore likes it or not…which we know he doesn’t).

In the Watchmen universe, Daniel Dreiberg spent his adolescence looking up to the original Nite Owl, Hollis T. Mason, a hero inspired in reality by The Phantom. Although technically Hollis wasn’t the first hero to don a mask, he was the first as far as the public was aware. Hollis was a policeman who was inspired by the actual first masked hero, Hooded Justice, and both were part of the first team of heroes called Minutemen. When Dan decided he wanted to don a mask himself, he tracked down Hollis using his tech skills. The two became friends and Hollis took him on as an apprentice and trained him to take on his mantle. 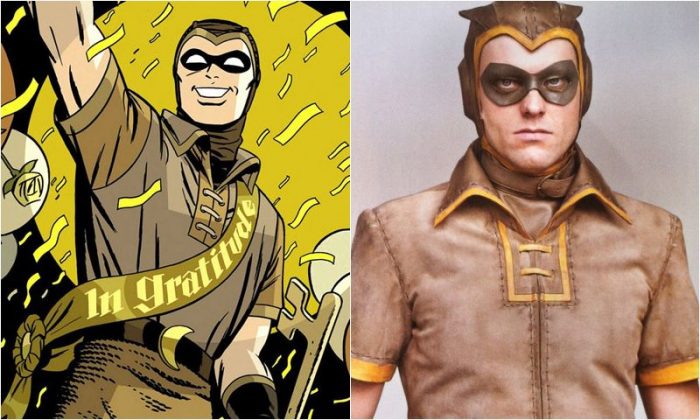 The persona of Nite Owl to Hollis wasn’t much more than an owl-themed costume and having a mean right hook. Dan, however, took the mantle to new heights with high-tech gadgets, a flying vehicle and a proper hideout. This evolution from one generation to the next reflects how superheroes have developed in reality. The Minutemen are a reflection of the Gold and Silver Age of comics that ran from the ’30s to the end of the ’60s. Likewise, the Watchmen represent the Bronze Age that spanned from the ’70s to the mid-’80s and the start of the Copper Age that picked up from the end of that period. On a side note, the Copper Age is also known as the Dark Age and the start of the more general Modern Age of comics as well.

Nite Owl isn’t the only Watchmen member who evolved from a previous iteration; Silk Spectre 2 and the Comedian can also stake this same claim. However, Silk Spectre’s development is pure nepotism and we find out sooner or later that the Comedian, despite a costume change, has always been a psychopath. Nite Owl’s journey is the most personal and introverted of the three and this is part of his underlying issues.

Now everyone knows that The Bat is compelled to be who he is through a deep-seated sense of justice and one of the most tragic backstories of any superhero. So imagine becoming him without this origin and for more…vain reasons. As I mentioned earlier, we all want to be a superhero at one time or another, so this is not a judgemental observation in the slightest. The first chronological evidence of this is in Dan’s prequel narrative in the Before Watchmen series. What we see here is a somewhat kinky relationship he has with a femme fatale who calls herself the Twilight Lady; she is equal parts dominatrix and heroine. 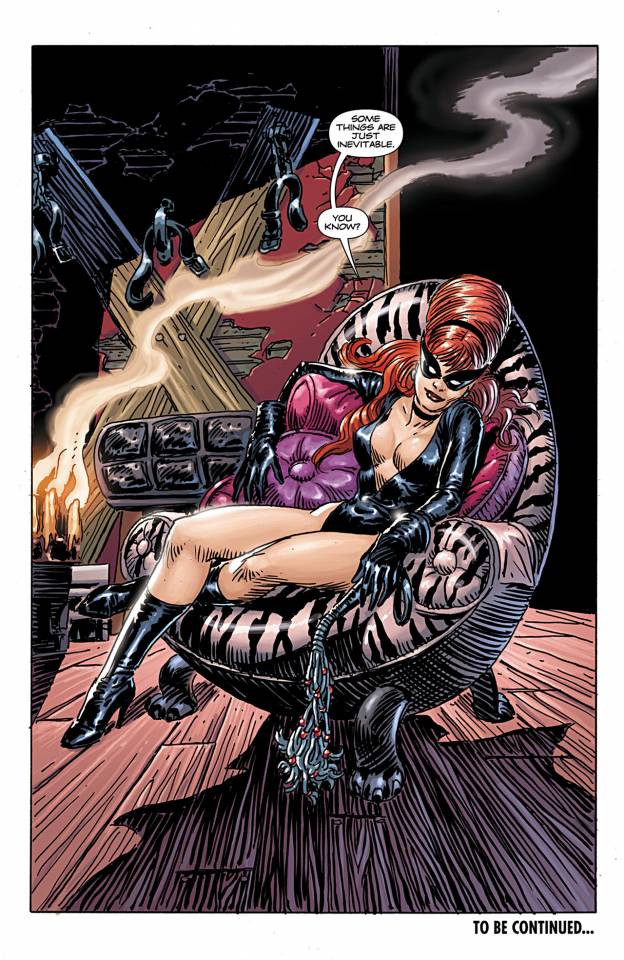 His toxic relationship is intertwined with complex mother issues that Dan has from his childhood. His mother was physically abused by his father…badly. This gives him a White Knight complex of sorts and is what initially draws him to the Twilight Lady. The impact that his parents have had on him sits in stark contrast to that of Bruce’s, who instead left an indelible reminder of what he’s fighting for that will never diminish in its impact over time.

This relationship, a mere dalliance of flirtations for his counterparts, develops into an erotically charged affair where their masks are transformed into sex toys used for role play. Eventually, the Twilight Lady breaks things off with Dan when the relationship starts to get too serious and he’s crushed. I think this is something that many can relate to, a passionate fling that’s over as quickly as it started but leaves a lasting impression. However, this isn’t something you usually expect a typical hero to go through. Even as far back as this early encounter, we see that Dan needs the Nite Owl persona just to function normally. 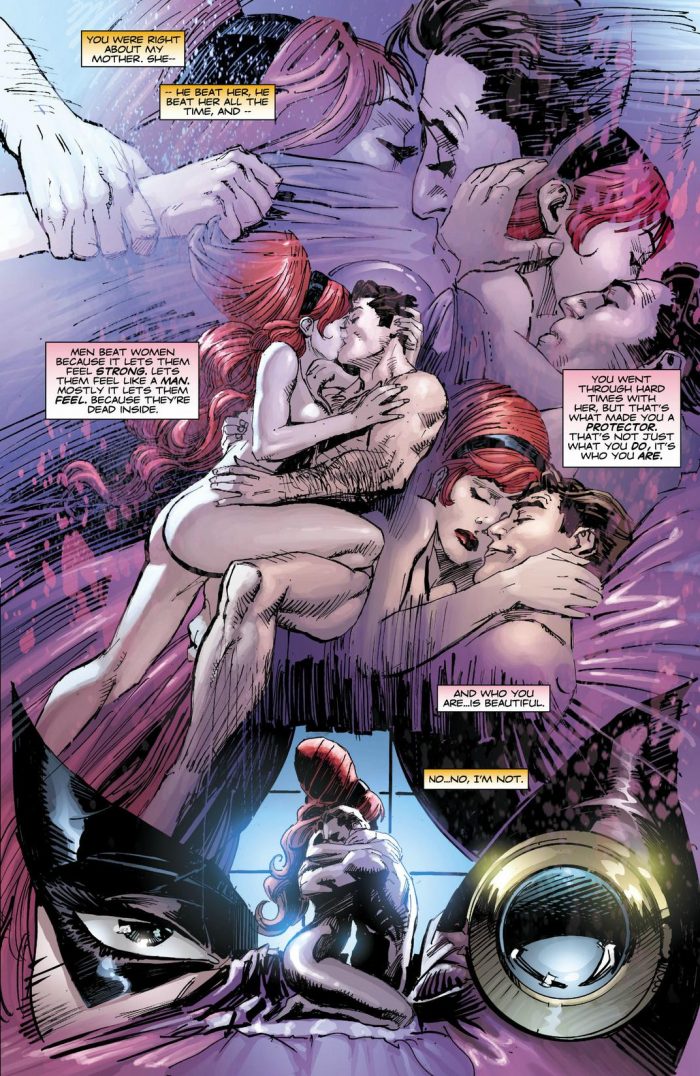 Fast-forward to the Nite Owl we know from the original graphic novel and film interpretation—a retired, overweight Dan. When Nixon passed the Keene Act that banned all masked heroes, Dan seems to have been hurt by it the most and taken it the hardest: unlike some of his former colleagues, he was never able to move on. His life loses all meaning until his old teammates Rorschach and Silk Spectre come back into his life.

The former, having refused to give up his mask, has to operate under the radar of the law. The latter, Laurie, was living with Dr. Manhattan in a government facility until they separate, which brings her to Dan’s door. They provide a two-pronged wake-up call that makes Dan realise that he’s impotent in both mind and body. At first, he thought he could live without his alter ego, which is perhaps why he doesn’t take the route Rorschach took but he slowly realises that his confidence and self-worth are reliant on him donning the mask again and being a hero.

This is obvious from a scene where Dan and Laurie are cornered by a gang in an alley and they’re forced to fight their way out. When they’re done bringing the pain, they are both panting and out of breath, in the same way you would be after a different kind of workout…Laurie even lights up a cigarette. Dan doesn’t get his mojo back fully until he dons his suit again and rescues people from a burning building. He celebrates suitably by immediately knocking boots with Laurie in his airborne vehicle. In the film, this plays out to a cover of Leonard Cohen’s song “Hallelujah.” Some have criticised this song choice but personally I think it works well as a choice that’s tongue-in-cheek. 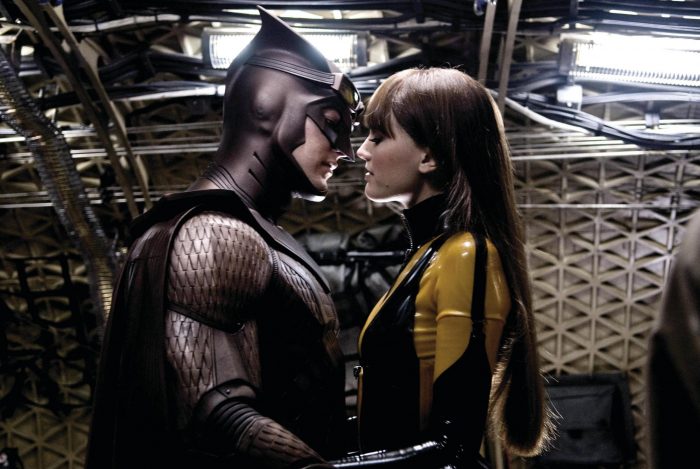 Dan’s certainly very capable at tracking and taking down criminals, but who would think that this could have a such a negative impact on your psychosis when you are no longer able to do so? This has been applied to Batman in the graphic novel The Dark Knight Returns, which came out the same year as the original Watchmen graphic novel in ‘86. However, the Caped Crusader’s journey back to crime fighting is more of an epic, mythic affair. Nite Owl’s story is a fairly contained, personal one and both have merit in their own right. Plus, Bruce’s relationships have always been quite surface-level affairs and strictly PG, so it’s interesting to see what’s happening behind closed doors for once.

Dan had a happy ending of sorts by the conclusion of the narrative in Watchmen and I’m not certain how much his character will factor into the new TV series. I hope he does as he was always the conscience of the team and I enjoy his variation on the character of Batman. If you haven’t seen it already, I suggest you check out the excellent parody video Saturday Morning Watchmen, where he is dubbed the leader of the team and it’s easy to see why.