When a remake of The Legend of Zelda: Link’s Awakening was announced earlier this year, I was skeptical. The style looked weird and wrong. But Instead of completely writing it off, I took the opportunity to replay the original. I learned several things from that replay. One: Link’s Awakening is still an absolute classic. Two: the new style is a perfect fit. Three: the original, understandably, had some rough edges.

Link’s Awakening (2019) smooths out these rough edges, making everything softer and more fluid. The overall path through the game has remained unchanged, but the world itself has gotten a massive overhaul. The harsh aesthetic has been made more Play-Doh-y and dream-like. Controls have been pared down and expanded upon in incredibly natural ways. The music just glows with radiant sound. And yet, for all these changes, the game still feels like Link’s Awakening and absolutely shines as a result.

Unsurprisingly, the first, and arguably largest, difference in the remake is the aesthetic. The blocky textures of the Gameboy have been upgraded to a far more modern style that just oozes with style. New players will be welcomed into to Koholint island with soft and encouraging arms. Long-time fans of Link’s Awakening will instantly be taken by the updates. Every element of the game feels surreal. The light haze at the edges of your screen leaves you feeling that something lurks just beyond, something you can’t quite understand. The whole world feels completely unique for a Zelda game and yet familiar. A perfect style for Link’s Awakening.

But with the new aesthetic also comes a new style of overworld. The tiles are (mostly) gone, in favor of a more free-roaming experience. Coming off the heels of the original, it took me a few moments to reorient as I waited for the screen to transition to the next. But once I had grown accustomed to the barrier-less world, I was engrossed. Movement from one area to the next manages to both feel distinct and smooth, naturally flowing from one aesthetic to the next.

Of course, moving away from the tile system also necessitates a new style of map and with it, a new way to encourage exploration. Play the original, there was satisfaction in revealing the maps tiles. A hidden tile surrounded by explored land instantly became a goal. Now, the map fills into near completion upon entering a new area. Instead, the game teases the new areas and secrets, offering the briefest of glimpses in the corner of you your screen as you wander through the overworld. It’s a brilliantly subtle way to encourage exploration without holding your hand and showing you what you may have missed. 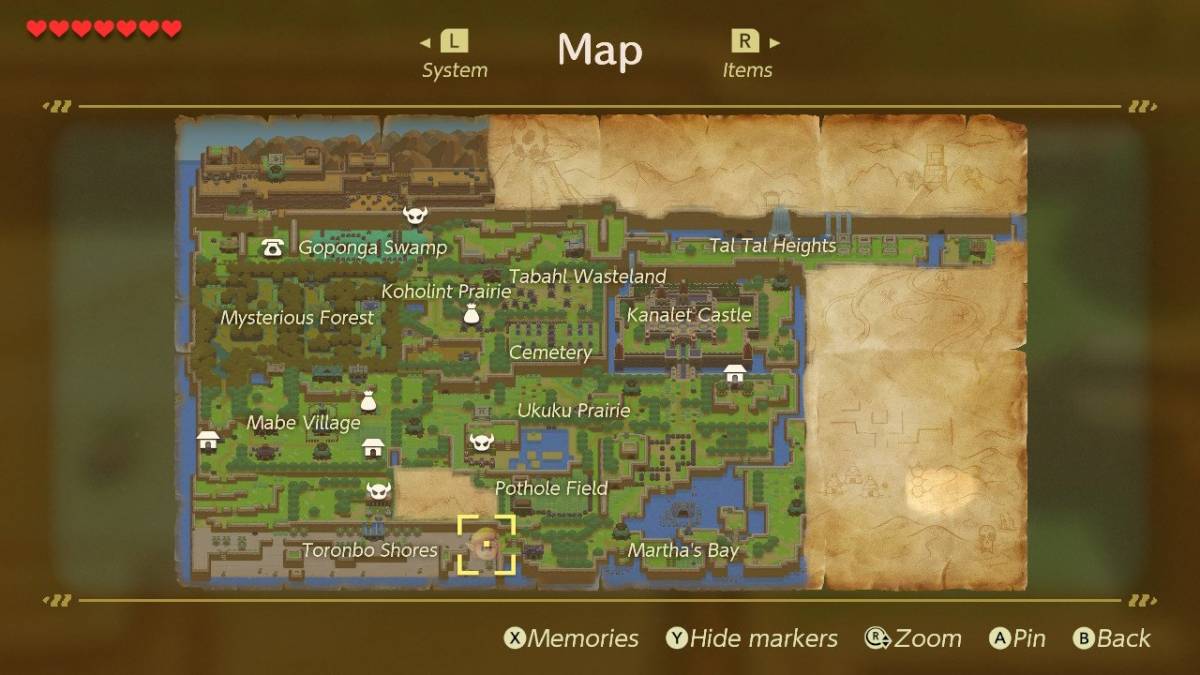 At the same time, the shift to a more open world seems to have introduced a new problem. The game never really chugs, but there are some definite framerate drops as you wander through Koholint. It seems to be more prevalent when playing in handheld mode, but I was encountering similar drops docked as well. Thankfully, the drops are short and light, making them easy to ignore in favor of the grander scope of Link’s Awakening.

The other big change from the original is far subtler but just as impactful. You no longer need to switch items all the time. Pressing R will instantly bring up your shield, and your sword can be swung at any time with B. You’ll still need to swap sub-items, like the roc’s feather and magic dust, but your sword and shield are always at the ready. A few dungeon items, once discovered, become permanent equips as well.

It quickly becomes apparent that this is not just a quality of life upgrade, though, as enemies have been rebalanced around constant access to your shield. Gone are the days where you could wildly swing your sword and eventually win. You can’t hide behind walls and spam attack until the unlucky keese flies into your sword. The game forces you to be more strategic. Moblins and knights now require blocking with the shield. They move around more, dodging and fighting to not get pinned in a corner. The game isn’t made more difficult in this way, but far more engaging.

Dungeons have also seen some subtle improvement. Originally, leaving and re-entering a room would cause all enemies to respawn. This would seal the doors again, and you would be forced to defeat every enemy just to move on. This never really made the game harder, just more frustrating as you killed the same slime for the sixth time. Thankfully, they’ve done away with this in the remake. Killing all the enemies in a room once will now keep the doors open, making the required back-tracking a little less grindy.

My biggest concern for newcomers to Koholint is not so much the difficulty of the game, but the obtuseness of its puzzles. The trading quest has become a traditional sidequest in the Zelda series, but in Link’s Awakening it is a central mechanic. There’s a puzzle involving a monkey right before the third dungeon that necessitates that you have done every bit of trading up to that point. Yet the game never tells you about the trading or how to really get started on it. You just need to talk to everyone and hope you find the right path through.

Barring framerate drops, Link’s Awakening feels like the superior version in nearly every way. Every mechanic has been streamlined to make Koholint a more welcoming world. The dungeons have been made less annoying and the overworld offers a bit more travel options. The original still has its own brand of charm and worth a look for die-hard fans, but I would recommend the remake first to anyone looking to get into Link’s Awakening.