While there are many great shows out there, only a few of them have a perfect beginning—the kind that draws you in immediately and leaves you wanting more. In 25YL’s Perfect Pilots series, we will be looking at pilot episodes we think are flawless. This week Caemeron Crain looks at the pilot of Lost on its 15th anniversary. Got a pilot you think should make the list? Let us know!

The pilot of Lost begins with Jack waking up alone in the jungle of The Island—a close-up shot of his eye suddenly springing open. He sees a dog and takes his bearings, finding a small bottle of vodka in his pocket. All of which is a bit weird if you think about—not just the uninjured dog, but the vodka bottle surviving the plane crash unharmed. And if you don’t think about it consciously, the music keys you in subconsciously, building the tension of this man waking up in a strange place, under strange circumstances.

Jack gets up and makes his way through dense bamboo. The tension builds and there is a kind of claustrophobia to the whole scene until he emerges onto the beach with its open sky. There is a moment of calm and silence.

Until that silence is pierced by a woman screaming. Then we’re into the chaos of the plane crash’s aftermath, with Jack running around trying to find ways to help (since he’s a doctor after all). We’re first introduced to characters in this milieu, and our first impressions stem only from how they react in the face of catastrophe.

Charlie looks sort of clueless near a downed engine. Jin screams for Sun, while Michael screams for Walt. Shannon, on the other hand, just screams.

Lost provides quick characterizations through these moments, and while on an initial viewing one might be too caught up in the chaos of it all to notice, in retrospect it’s clear that these characters are pretty well established from the start. Hurley, for example, is completely willing to help the pregnant Claire, even though he is clearly also nonplussed about the whole situation he’s found himself in.

The first hour of Lost’s pilot barely contains a flashback. The only one is to the crash itself and the moments leading up to it. How Jack got that vodka bottle is explained, and there is a nice little exchange between him and Rose that gets her character going, but that’s about it.

The first part of the pilot is instead pretty much all action, tinged with a bit of horror. Once things settle down in the aftermath of the crash and the survivors make camp on the beach, they hear strange and ominous noises coming from the interior of The Island. They witness bent trees and note how unnatural the whole thing seems. No, Walt, that’s definitely not your dog.

And it would seem this same force is responsible for the death of the pilot of their plane. After Jack, Kate, and Charlie find him, the pilot barely has time to tell them how off-course the plane went before he’s violently sucked out a window and left bloody and dead in the limbs of a tree.

From the perspective of having seen the whole of Lost, it is fairly easy to speculate about the cause of the pilot’s death (though I don’t think it’s ever explicitly explained). There is pretty much only one possible answer but, on an initial viewing, this moment brings the stakes of the show to a head. Not only are these people stranded on an island far away from where authorities might be looking for them, they are stranded there in the presence of what seems to be a supernatural and murderous force.

The pilot’s death pushes Kate to a visceral terror, which she overcomes by following Jack’s advice (from earlier in the hour) about letting the fear in for 10 seconds, but honestly, given the way Lost presents this whole scene, the pilot’s death should probably have had more of a traumatic impact on the characters present moving forward than it seems to have. This is the stuff of horror films.

The first part of the pilot ends more or less there, with the transceiver having been retrieved and the pilot murdered by…something. It’s ominous as the show cuts to black and the word “LOST” swirls onto the screen in a way that would become iconic.

The tone of the show has been established, as has the mystery that will be at its heart. A couple of the main characters—Jack, Kate, and Charlie—have been established as well. Others—like Hurley, Claire, and Boone—have been established somewhat. But basically all Sawyer does is light a cigarette and throw it away wastefully too soon, and pretty much all John Locke does is smile with an orange peel over his teeth. Thus, it’s important that the pilot of Lost has two parts. 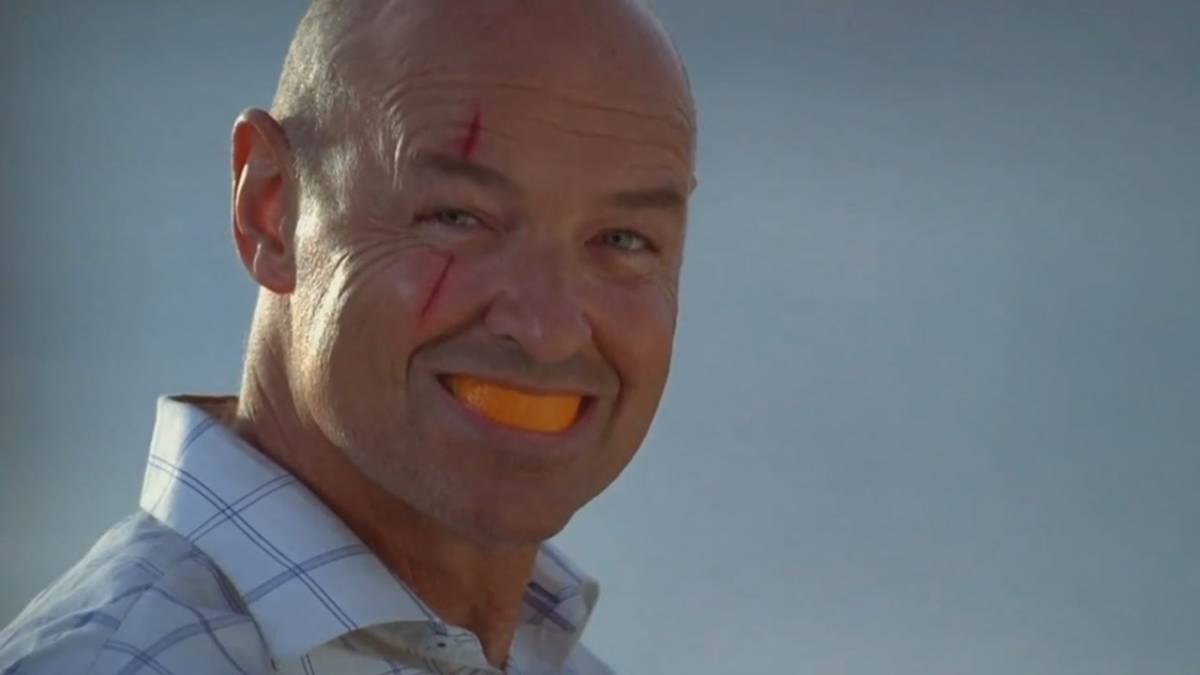 Whereas Part 1 sets the tone of the show and its mystery, it’s only in Part 2 that we get the rhythm that will come to define Lost: the back and forth between moments on The Island and character-specific flashbacks that flesh people out, the building of the mystery, and the way in which Lost is just as much about the drama between these characters as it is about any of that.

The show moves to begin exploring something that will be central to it, related to what Social Contract theorists have called the State of Nature. That is, if you were to strip all of the rules and strictures of society away, what would humanity be like? Would we be selfish and competitive? Or perhaps friendly and cooperative? Do our problems stem from a natural lack of trust, or the betrayal of it? Is it a dog-eat-dog world (and sometimes vice versa), or is it maybe that we become too attached, and thus biased, based on who is in our tribe?

Perhaps it is all of those things. There is no way to answer a question about what human nature would be apart from society definitively when all of our experience is with human beings who have been socialized. The influence of culture is always-already there, both for us, and for the characters on Lost. Sawyer suspects Sayid, for example, and clearly 9/11 is relevant. As much as Lost asks what we’d be like if you threw us all on a desert island with no hope of rescue, it also remembers that each of these people has been informed by everything in their lives that came before.

Live Together or Die Alone

In the second part of Lost’s pilot, we learn that Kate was the one handcuffed by the U.S. Marshall until things went wrong, but the people on The Island do not. Maybe Jack does, but we don’t see this happen, as the scene cuts off with him asking, “Who?” We learn about Charlie’s heroin addiction, but the others don’t. We learn that Sayid was a member of the Republican Guard and fought for Iraq in the Gulf War, but the others don’t learn this either (except for Hurley).

Slowly these characters and their faults come into view, but Lost plays with the difference between what we know and what the characters do throughout the pilot. The mystery isn’t just about The Island, but about these people, and it’s not just about nefarious things they have done.

John Locke asks Walt if he wants to know a secret, and the scene cuts off there. 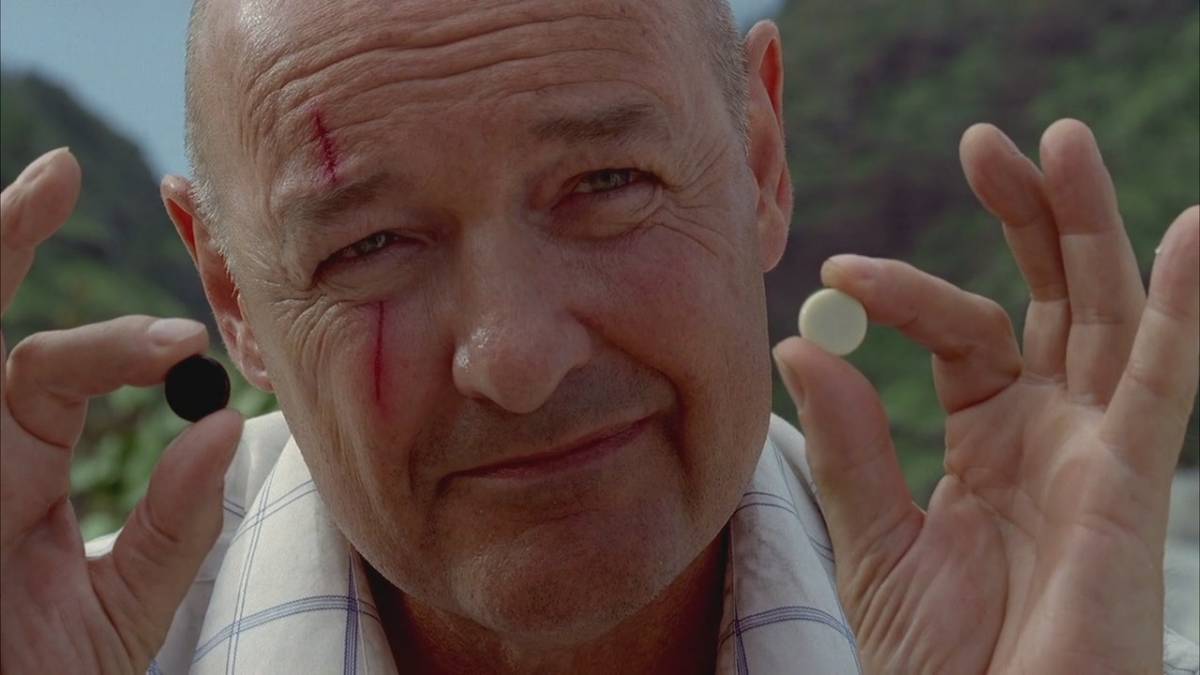 Throughout this pilot episode, characters are deepened—we get people like Shannon and Sawyer going along on the mission to find a signal for the transceiver—and the mystery is as well. When they finally reach higher ground, the team discovers a message that has been repeating for more than 16 years. It’s a French woman, who says everyone else has been killed. Call for help.

Overall, the pilot of Lost serves to establish a mystery—and more than one. There’s that about The Island, but also those about the characters.

What did Kate do to put her in cuffs? What is Locke’s secret? Why is Michael and Walt’s relationship so fraught? Why was Claire flying when she is eight months pregnant? Why is Jin so protective of Sun?

And while Shannon might seem like a twit, the second part of the pilot shows she’s deeper than that. She volunteers to go along on the expedition to find higher ground and ultimately comes through as the one who can translate the transmission. Her brother, Boone, really wants to be helpful but ultimately seems like he has less to offer.

Yet, by Part 2 of the pilot, virtually everyone is confronted with this question: are we in this together, or not?

Do you take Jin’s fish? As much as he’s kept Sun apart from the others, I find this running theme striking. He’s going around and offering everyone food. He wants to help. And yet…

Do you trust Sayid? Sawyer? Locke? Kate? All of these questions seem open at the end of Lost’s pilot, but I think in a good way.

Already it becomes clear that these people are in it together. They can either recognize that or not. Their pasts might be relevant to understanding who they are, but Lost is all about who they will be. They can either find a way to live together, or they can die alone.