When it comes to reasons you love a film, I suppose “because it reminds me of my D&D campaign” is as valid a reason as any. I found Undercover Blues in one of those supermarket bins of B-movies on VHS, for pocket change. I can’t remember what prompted me to buy it, except that I’ve always liked Kathleen Turner (Serial Mom), and Dennis Quaid (Wyatt Earp) looked cute on the box. And no, I never kidded myself that it had any real depth or quality to it. But hell, it’s fun. 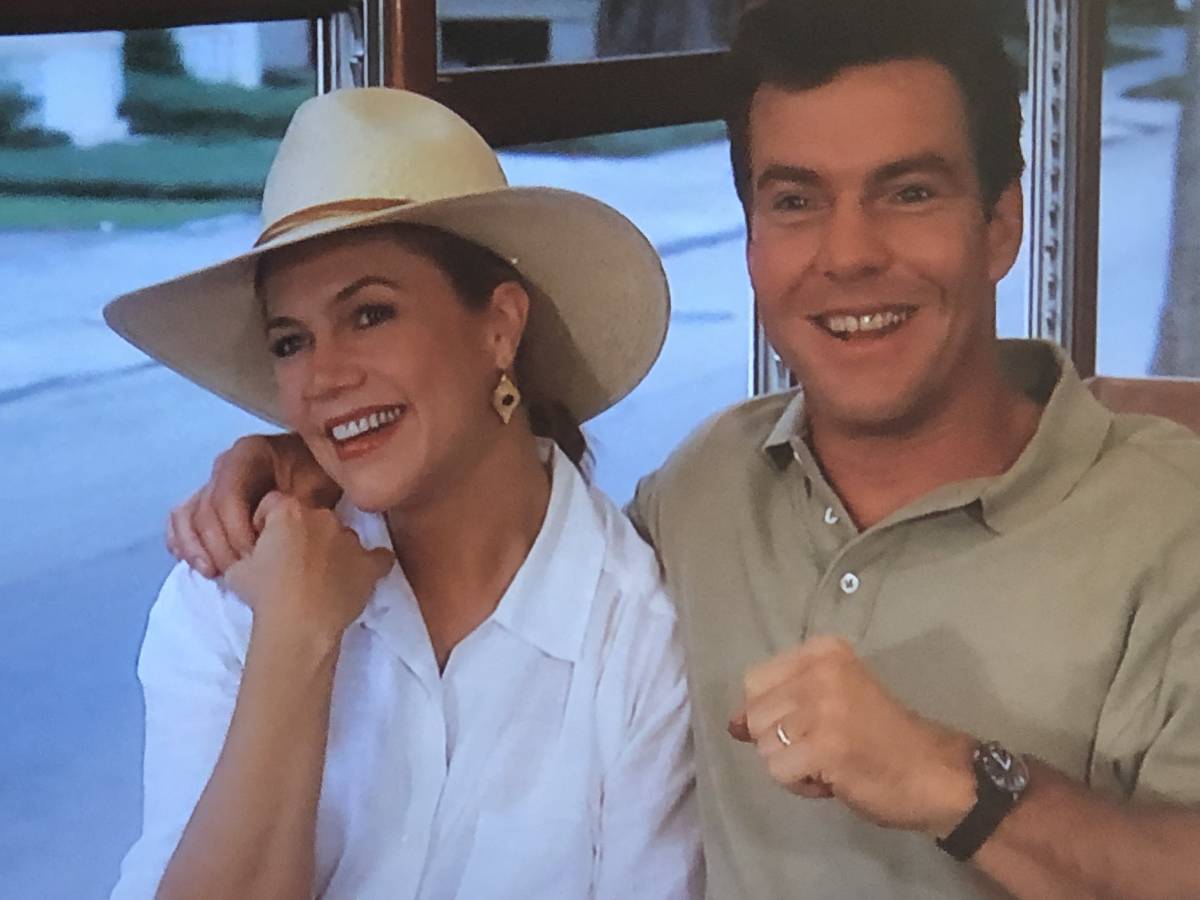 Turner and Quaid play Jane and Jeff Blue, a pair of government espionage agents, who are on holiday in New Orleans with their new baby daughter. The particular agency is never specified, though both the FBI and CIA are mentioned. They are on maternity leave, to start their daughter off right, and to live a so-called “normal life”. Unfortunately, adventures follow them even when they’re off the clock, and they become embroiled in a plot involving stolen explosives, political criminals, and Fiona Shaw at her villainous, scenery-chewing best. It’s the love child of a spy movie and a rom-com, and I adore it.

I shan’t bore you with details of my early-nineties D&D campaign, but suffice it to say that Jeff and Jane’s parents rolled a lot of 18s when creating these two. Get it? If I knew anyone like this in real life, I would resent them for having hogged all the good DNA. Obviously they’re both gorgeous, and their onscreen chemistry is fantastic. Jeff and Jane, Badass OTP. They both speak multiple languages and are experts in hand-to-hand combat. They’re both witty, smart as hell, and show every indication that they’re even going to be great parents. Could one of you two please be bad at something, just to add to the fairness in the universe? It’s mentioned a couple of times that Jeff is a terrible shot with a gun, but I never quite believed him.

Since Undercover Blues was one of those “blink and you miss it” movies, I don’t recall any press or quotes on how either Turner or Quaid felt about this film, or why they wanted to do it in the first place. Watching it, you can easily see reasons why they would want to, right along with reasons why it didn’t do well. I mean, it is undeniably goofy. If someone went into it expecting any grit or real drama, they were going to be sorely disappointed. If you’re looking for the suspense of a James Bond film, look elsewhere. 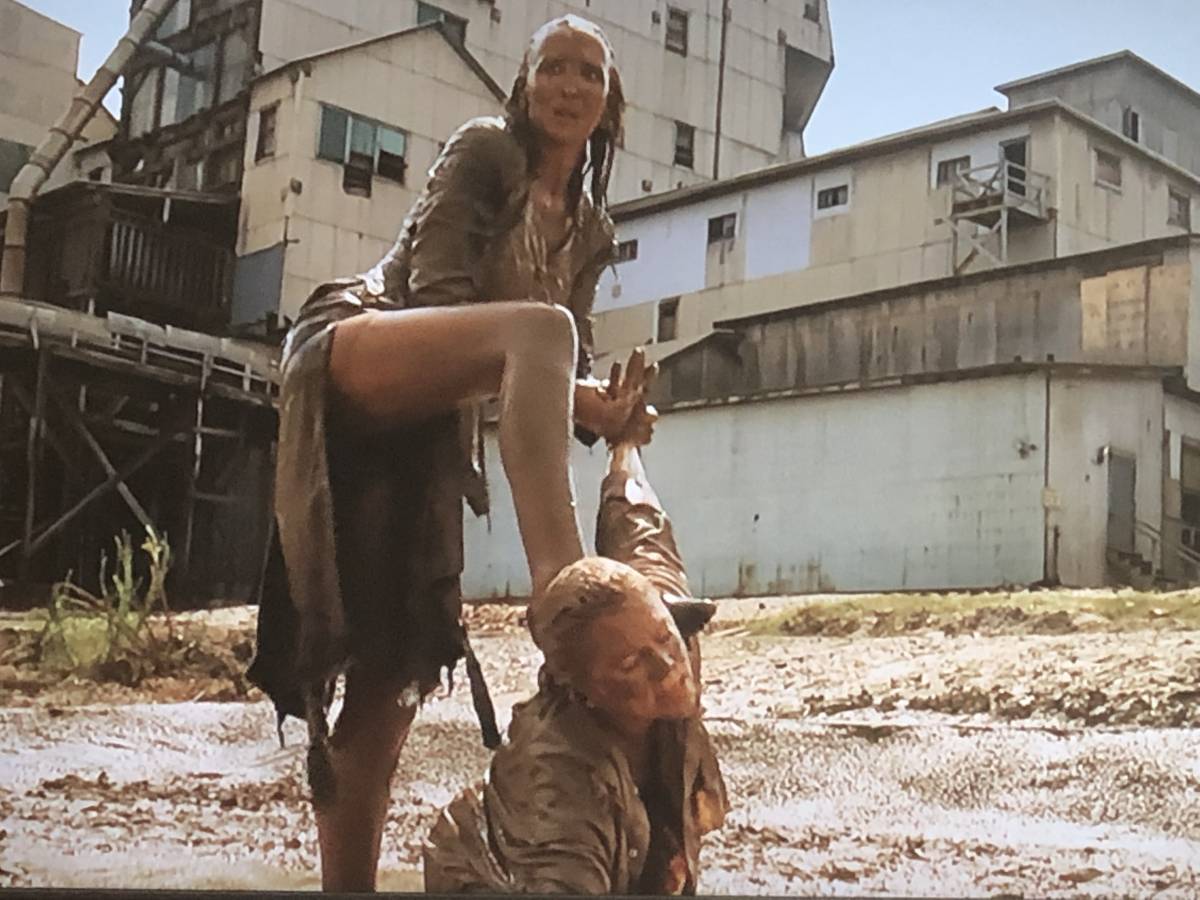 Undercover Blues doesn’t try to be anything more than what it is—a fun, wacky romp. I could give you a more detailed plot synopsis, but really—who cares? The plot is there to serve the antics, and it does this perfectly well, without being too complicated. Jeff and Jane are that couple that everyone wants to be. And the film totally leans into that. Even the camera angles and costuming make loud statements of look, everyone, Kathleen Turner does have the most amazing legs in the universe. But it isn’t done in a way that feels sexist or exploitative, the way it might in a Bond film. Even when she and Fiona Shaw end up in an honest-to-God mud-wrestling sequence toward the end, they didn’t go out of their way to make it sexy. Turner spends the movie in comfy-looking skirts, linen pantsuits (it’s New Orleans, after all), and sneakers. This couple is so wonderfully gross that at least once, she’s seen wearing the top half of a pair of silk pyjamas, while he is wearing the bottoms. Gross, and adorable. 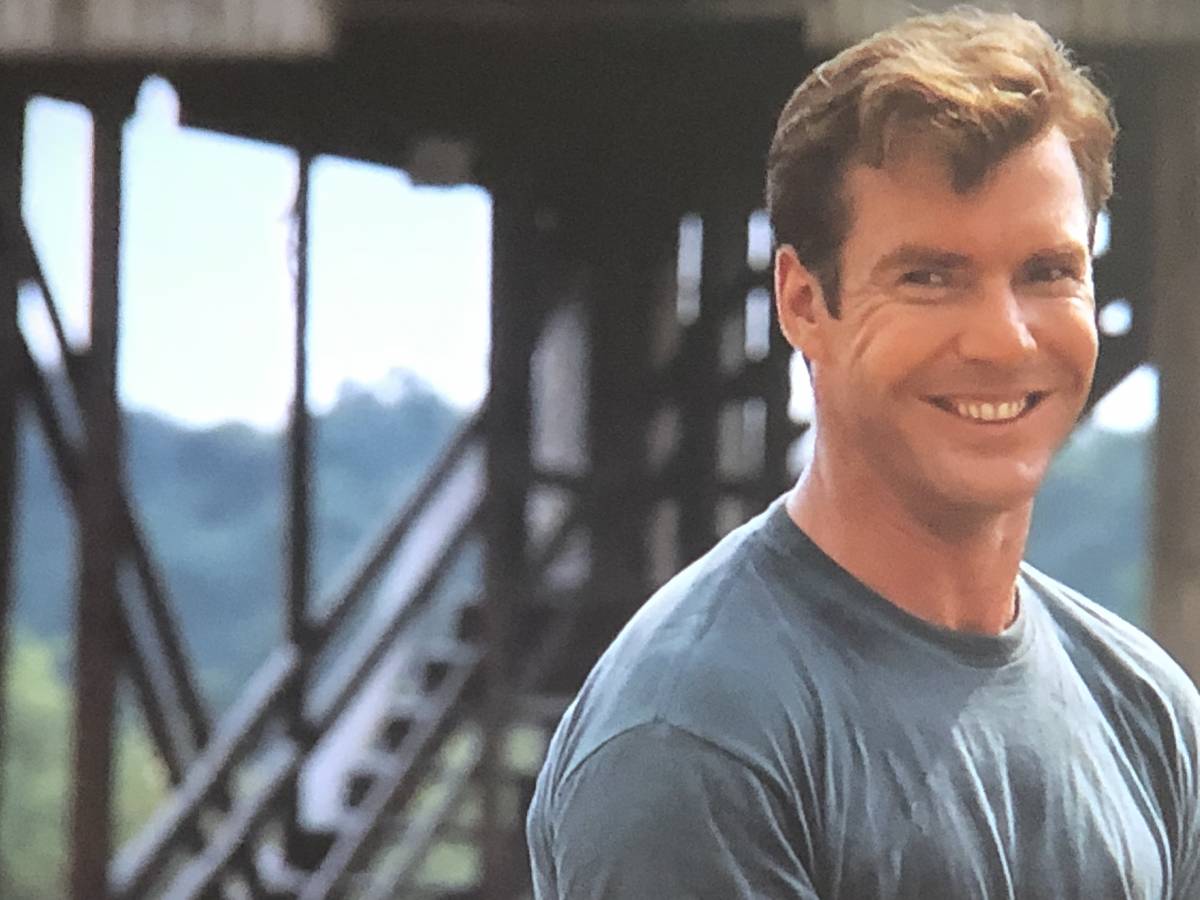 I honestly think that this was the movie that made me fall in love with Dennis Quaid, and it’s because of his smile. Sure, he’s handsome in general. But Jeff Blue is constantly amused by life (I would be too, if I were as capable as him), and thus he always has this grin on. It lights up his entire face, and you get used to it…and then, in what is probably the only serious moment in the film, the smile goes away. Fiona Shaw threatens his daughter, and it’s the grin disappearing from his face that makes you realise the gravity of the situation. It turns out that the baby is safe with a neighbor and what Shaw had been threatening was actually a doll, but you don’t know it at the time. 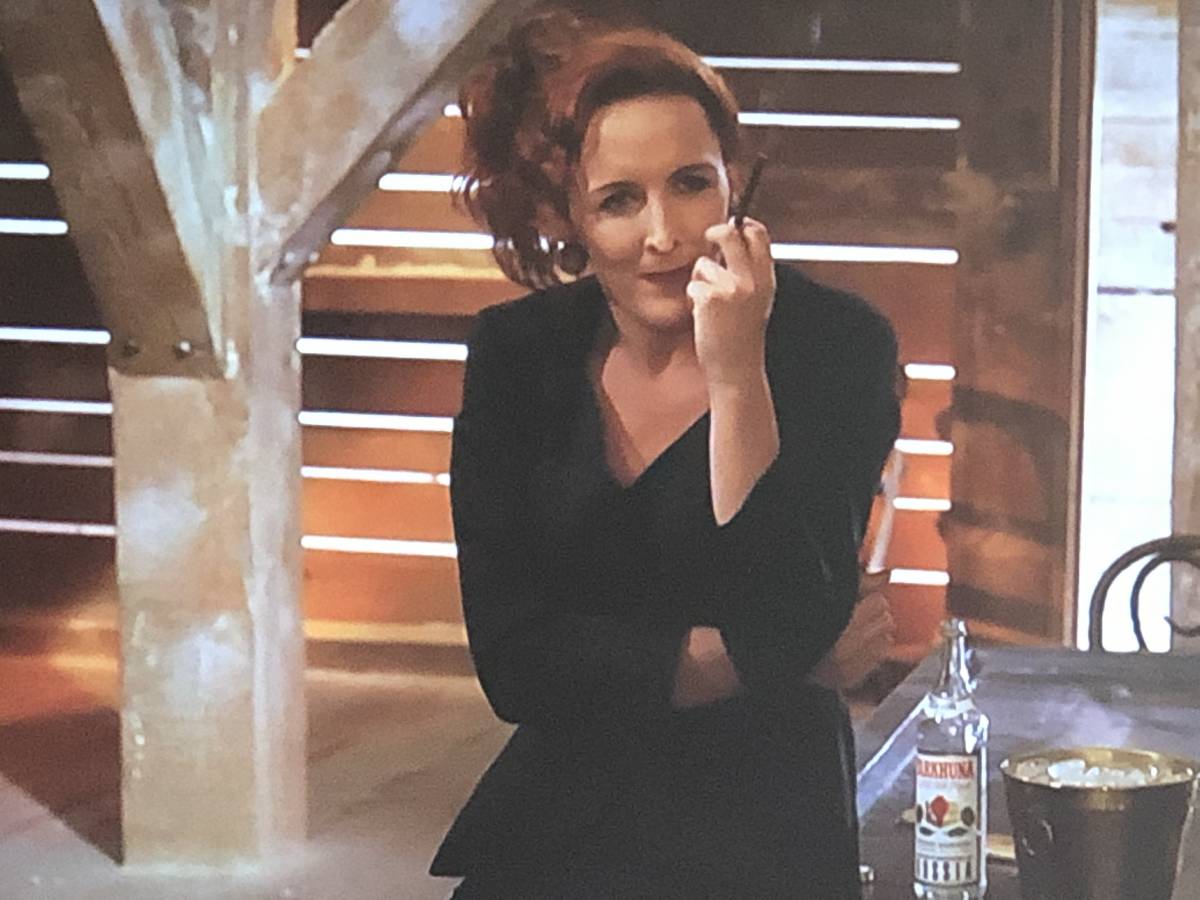 Another thing that makes Jeff Blue beyond sexy is how in love he is with his wife. She is obviously crazy about him too (and I’m sorry, but no couple—outside of the movies—with a toddler is ever constantly as cheerful or as well-rested as these two,), but he’s the one who has lines that call attention to how great he thinks she is. He tells the local police detective who has been following them around (Obba Babatunde), “Ted, Jane’s an expert in martial arts even I can’t pronounce. She can kill you seven different ways without using her hands. I’d do what she says.” And he insists on naming their daughter Jane Louise—after her mom. It’s sweet. 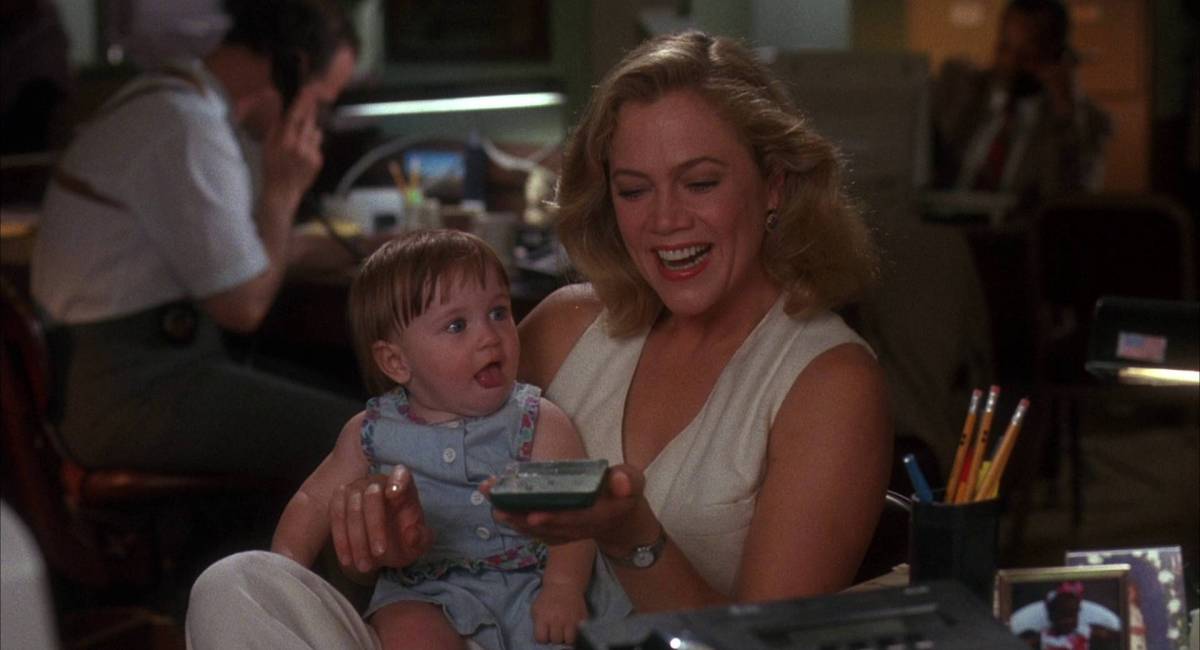 I absolutely get why Kathleen Turner wanted this gig. Not only does she get to kick some ass, doing a lot of her own stunts, but she kind of prepares the way for the “hot mom” movie type. Angelina Jolie was the one to really pioneer that as a type for women in Hollywood, adding to the standard “babe” and “district attorney” types, but women like Kathleen Turner set the stage. Jane Blue is a woman who can have it all. Fulfilling mom-hood, handsome and adoring husband, exciting career, and legs for days. Realistic? Maybe not. But fun to watch.

Special mention has to be made of Stanley Tucci in this film. He plays the B-villain, a local thug who thinks he can instill fear into his mugging victims by naming himself “Muerte”. Tucci, who has made a career of being ethnically ambiguous, rocks a Spanish accent that is just cheesy enough to still be believed. He likes to mug tourists, along with a sidekick (Dave Chappelle, in his first film), and then departs with a flourish of his knife, and the pronouncement, “my name…is…Muerte.” That’s right, folks, he’s death. At least, that’s the plan. When he has the bad luck to encounter Jeff Blue, who has taken the baby out for a walk, the mugging doesn’t go quite that way. Not only does Jeff kick both their butts (while holding the baby), he keeps calling Tucci “Morty”, which infuriates the thug every time, and it just keeps getting funnier. He’s ridiculous comic relief, he’s good at it, and he’s the best thing in the movie. No, he’s not actually Latinx, but he reads just fine. Like I said, ethnically ambiguous for a living. 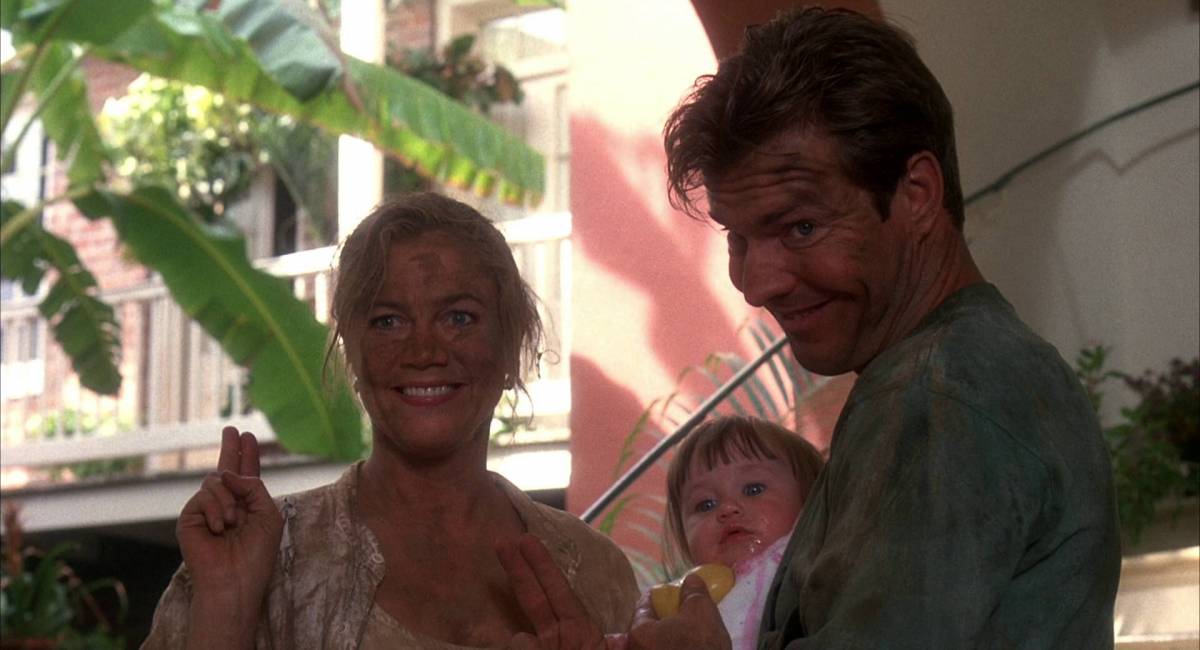 Is Undercover Blues going to change anyone’s life? No. Maybe it will influence your relationship goals, and I have to confess that I named one of the new horses at my barn “Morty” (he was kind of skinny when we got him, and he reminded me of every painting I’ve ever seen of Death on a pale horse). But that’s about it. It’s fun, cute, and, if you are very lucky with your dice, might remind you too of a D&D campaign.