Without fail, if I see that a TV show involves some sort of mysterious plane crash, I am going to check it out. ABC’s new drama Emergence checked this box, and I predictably watched the debut episode this week with hopes of greatness.

While I don’t think it was as bad as, say, last year’s Manifest, I’m not sure I can confidently say Emergence will gain a steady audience and become a solid series. (Then again, I didn’t think Manifest would survive to see a second season, so who knows.)

Fifteen years ago, Lost—one of the best TV series of all time—debuted on ABC. Yes, it’s generally about a mysterious plane crash. But it was obviously about so much more.

We have heard many times that a show could be the “next Lost.” Flash Forward, V, The Event, and Manifest all were billed this way. I don’t think there will ever be another Lost;. However, I can’t help myself when I see a show that tries to re-create a similar type of magic and mystery.

Enter Emergence. It has a plane crash. It has a number of unexplained mysteries. It’s airing on ABC! How could I not check it out?

The opening scene of the pilot episode focuses on a neighborhood in Long Island in which all electricity goes out and random items become magnetized. (Already ramping up the Lost feelings.) This strange event precedes a small plane that crashes on a nearby beach.

Jo Evans (Allison Tolman), the chief of police, is called to the scene of the crash and discovers a young girl (played by Alexa Swinton) who appears to have escaped the crash without a scratch. We assume the girl was on the plane but don’t know for sure, as she can’t remember anything (including her name, though she is eventually named as Piper by Jo). In addition to the mystery girl, the circumstances around the crash are clouded in question.

NTSB agents (who we later learn were people impersonating NTSB agents) clean up the crash in a very short time, and then declare the private jet was not a private jet, but in fact an unmanned drone. An obvious lie, Jo and fellow officer Chris (Robert Bailey Jr.) determine.

With these major mysteries established, are they enough to really capture viewers?

For me, I thought the Emergence mysteries fell a little flat. A young girl with possible supernatural powers being pursued by secret government official feels overdone. Stranger Things and The Passage  immediately come to mind. But the two young girls in those particular shows are more interesting than Emergence’s Piper (at least so far). Piper’s character comes off as a bit bland, and the biggest twist of the episode—when Piper slices open her neck with a box cutter, removes a small chip, and flushes it down the sink—led me to think she’s either some sort of alien or government project. Neither of these ideas does a ton for me. 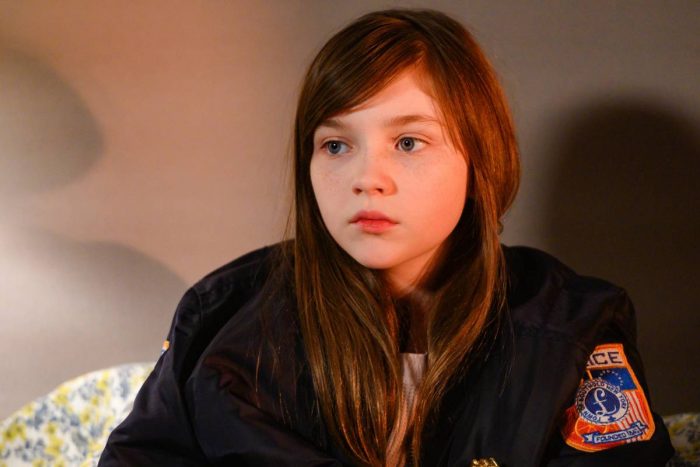 Also, I have a very strong aversion to amnesia plot devices, so I found myself immediately disliking where things were heading with Piper. I realize she’s likely not actually suffering amnesia but merely faking it, but I’m still not a fan of it. If she is faking it, is it because she wants Jo to protect her, or is she on some sort of infiltration mission? I anticipate this mystery being drawn out throughout the season, which could become frustrating.

As a big fan of Allison Tolman’s performance in Season 1 of Fargo, I looked forward to her starring role in Emergence. In the pilot episode at least, she does an admirable job and is easy to root for as a recently divorced mother and police chief. However, she wasn’t able to prevent a few scenes from dragging on, including arguments with her ex about their daughter Mia or a conversation she had with Piper about her own mom who went missing.

A scene in which a man and women claimed to be Piper’s parents (or Olivia, as they were calling her) provided minor suspense. It was immediately clear the two people were impostors, but the predictability was of no fault of Tolman’s performance. If Emergence ends up being a success, it will be because of Jo’s character. We’ll see if Tolman is able to make that happen—or more accurately, if the Emergence writers allow it to happen.

While I clearly didn’t love the first episode of Emergence, I do feel like I will stick with it for at least a few more episodes. It’s not going to be another Lost—even though Lost alum Clancy Brown plays Jo’s cancer-surviving father and previews for future episodes promised a Terry O’Quinn appearance (this just about sealed the fact that I’d be returning to this show at least for now). But if some of the many mysteries introduced so far can take unique, interesting turns…well there’s a pathway to potential.

Will it ultimately be worth watching week after week? I hope it is, but after one episode, my expectations have been lowered.