‘The Legend of Zelda: A Link To The Past – Gold Standard of Gaming’ is now available on Audio, read by author John Bernardy, exclusively for our Patreon supporters. For just $3 a month you will have access to our full library of Audio content, plus three new uploads every week. To sign up visit our Patreon page: https://www.patreon.com/25YL

At 25YL, we love gaming, and moreover, we love The Legend of Zelda series. That’s why we’re going to cover the entire official Nintendo franchise, including the handheld games, every week. We continue our in-depth coverage with the 1991 Super Nintendo sequel, The Legend of Zelda: A Link To The Past.

If those spinning Mode 7 triforces converging in the center of the screen weren’t enough indication, the brightly detailed sprite work on The Legend of Zelda: A Link To The Past’s title screen should give you this strong feeling: We’re not on the NES anymore.

The Legend of Zelda: A Link To The Past is the fully realized vision of what the 8-bit Zelda games aspired to be. And ever since, it’s been the gold standard of its genre.

This game is basically the Citizen Kane of video games. Today, it looks by-the-numbers, everything you’d expect to see in a fantasy action quest. While easily playable, it may seem unadorned to you. Citizen Kane has the same problem; it seems plain compared to the movies made after it. But people forget Citizen Kane was the first movie to combine story elements into a single tightly built story. It’s the template of everything after it.

Link To The Past is quite similar. The first Zelda began the overworld-dungeon quest format, but improvements were ready to be made. Among other things, it was impossible to locate the hidden entryways without hitting every part of every wall. Link To The Past worked out all those kinks and added so much more—and I don’t mean just verticality. It’s abundantly clear the development team put over a year into game design alone, and this was during the days when entire games were completed in a year. The team was as successful as you can get. I lost multiple summers to this game and I have zero regrets.

Every part of Link To The Past’s gaming experience leads from what Link is and is not able to do at any point in the story. You’re playing on an expansive overworld map, but you grow into this world organically. And you can never get lost for long.

You begin in Link’s house. The first thing you hear is muffled rain. When you leave the house, the rain becomes louder and the raindrops fall all around you. Already, this world behaves like a real place and it feels lived in.

You leave the house to follow Link’s uncle, and find your way immediately to the castle because the path is otherwise blocked by palace guards. The castle is the only way forward. Link doesn’t have a sword so you figure out he can pick up bushes, and that eventually reveals a hole.

You’re so busy experiencing the story you may not notice you’re learning how to play the game without a tutorial. Before you even get your sword from your uncle, you’ve learned two skills: how to pick things up, and how falling down holes reveals hidden locations.

This ethos goes through the entire game, even when you’re first introduced to the Dark World. You find a portal that sends Link to a brown, desolate version of where you just were, and Link’s become a pink bunny that can’t use the A, B, X, Y, L or R buttons. The only thing that works is the direction pad. This is highly disconcerting after having progressively become more and more capable. But you trust the game by now, so you know once you find the perfect item you’ll have an entirely new world to explore. 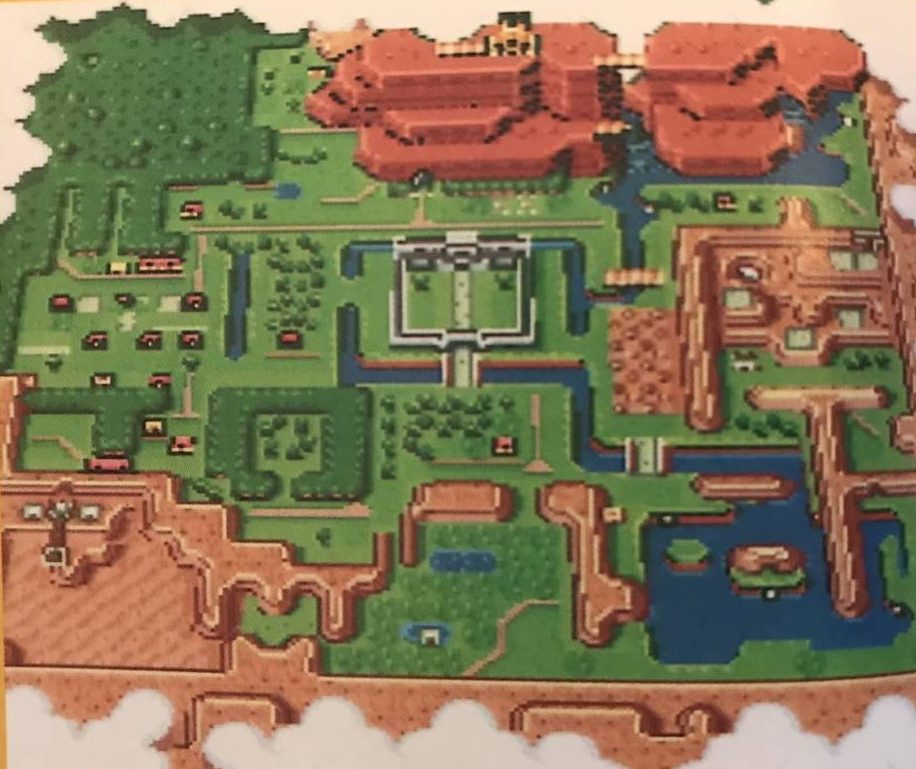 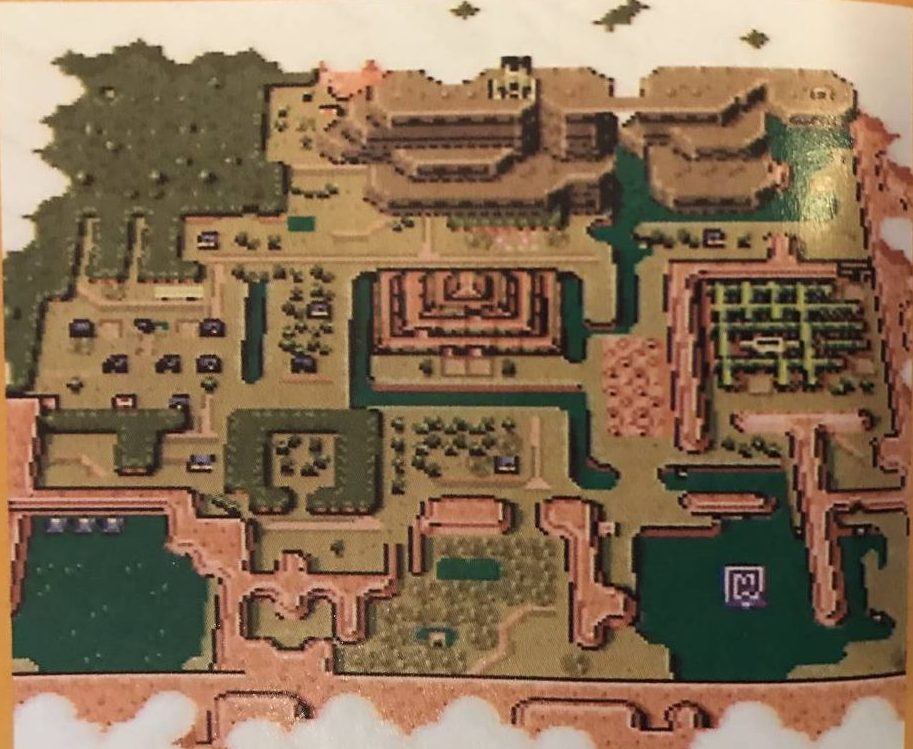 This guidance by design is very Metroidvania, even though it predates Super Metroid by three years, proving once again how far ahead of the curve this game is. Link To The Past nudges you in the right direction and you feel like you’re figuring out the rest yourself.

And this all happens while the story slowly reveals just how big it really is:

Hyrule and its Residents

My favorite non-Link character is easily the Witch. The attention to detail on how the Witch stirs her potion pot still gets me with how endearing it is. Then there’s the lumberjack brothers sawing on a tree—which you’ll later be able to dash into and climb in once they leave it. Then there’s the dwarf blacksmiths, the fortune teller, Zora the talking fish, the faeries, even the hunched over old man who has the magic mirror. All these characters are filled to the brim with character design and personality. 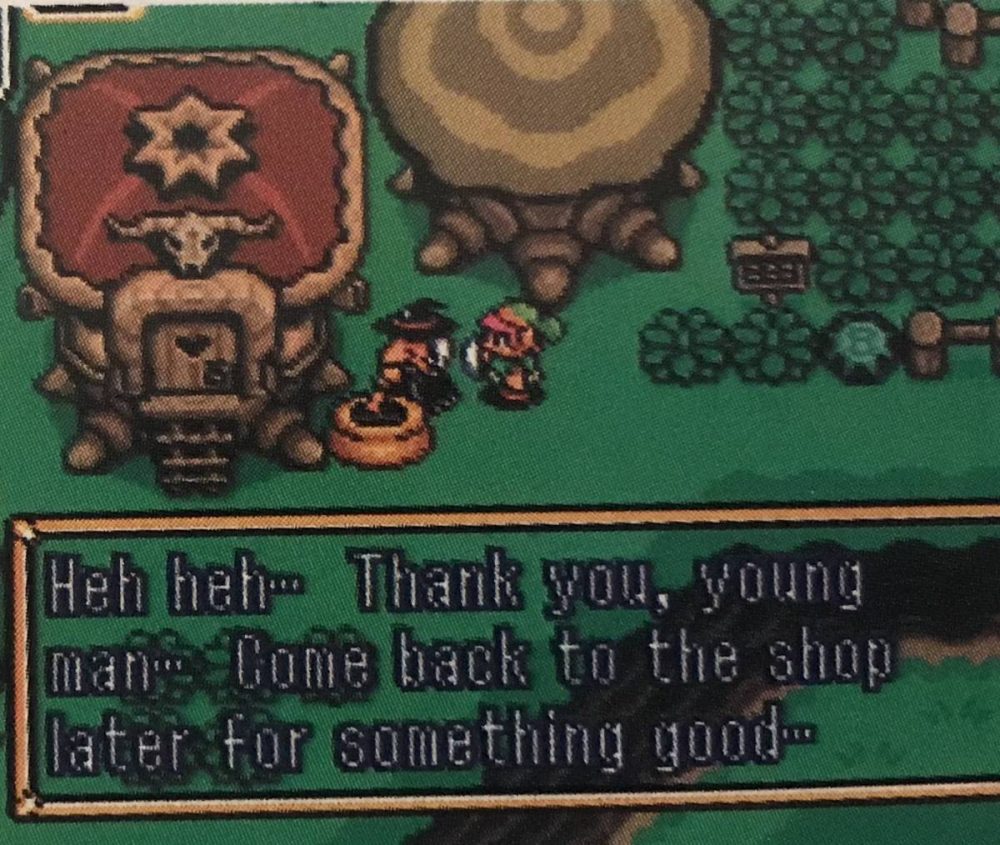 It’s not only the humanlike characters; even the woodland creatures and the bee swarms have personality. And you have to love the swarming chickens when you clobber one too many times with your sword.

Chicken swarms started with this game. It may not accomplish anything for Link, other than teach you to be respectful of your surroundings, but details like the chickens sure make the world feel like it has a life of its own.

The dungeons feel that way too. Each area has its own theme, and it is related to how it fits into the overworld map. 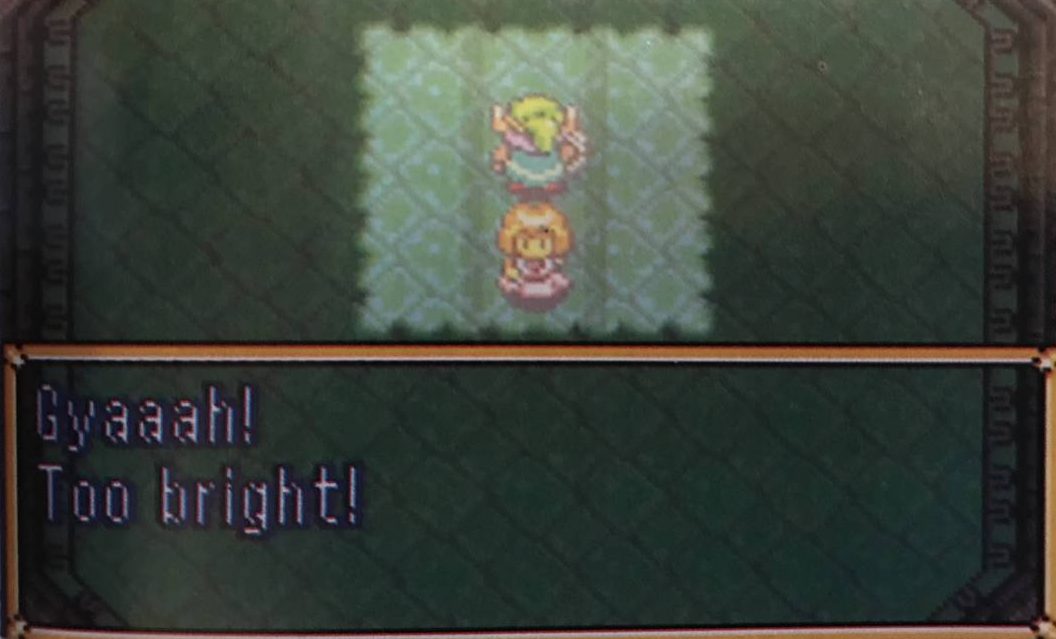 The Ending and Overall Thoughts

I love the world of this game so much. I know Link’s Awakening is the game that was so actively influenced by Twin Peaks, but Link To The Past has plenty of connections as well. Be it the lived-in world of fun characters, or the fact that there’s an entirely different negative world right on top of your own, there are thematic connections between Hyrule and Twin Peaks. I was already a Twin Peaks fan when this came out, and while I didn’t overtly notice the connections, I could absolutely feel them. Whatever sensibilities the two properties share, I’m glad for it because it taps directly into my personal brand of catnip.

Besides Super Mario World, this is the only game I ever wanted to max out and get a 100% complete. I got the invisibility cloak, every bottle, all 24 pieces of heart. I even got that god damned Cane of Byrna from that difficult-to-get-to cave on the side of Death Mountain. But I still couldn’t get zero deaths in the Misery Mire dungeon because my cartridge recorded my deaths before I could hit the reset button. That’s the only explanation, because I was eventually able to get through it clean but I still had a 002 in the end credits for that dungeon’s numbers. But it’s not a sticking point, oh no. That doesn’t stick with me at all.

But that’s in the credits. The ending has to happen first.

Link defeats Ganon in an epic fight in the center of a pyramid, and then you’re presented with the triforce in a chamber, where Link is allowed one wish. And he wishes for the return of peace—therefore removing all the darkness Ganon brought to Hyrule and the Golden Realm.

You’ve accomplished something huge and the game rewards you with a heroic fanfare playing over a cavalcade of all the noteworthy side characters’ happy endings—whether it’s Shahasralah returning from his exile or Link’s uncle recovering. Seeing all these characters again—going about normal lives, working their jobs, playing—is so cathartically happy. And it shows you exactly how expansively far you’ve gone. In 1991, there is nothing bigger than Hyrule in Link To The Past, and this lengthy ending sequence proves it.

And then there’s that somber credits song that is so beautiful I want to cry. Now, you can go on YouTube and listen just to that, but in 1992 I would spend the time to defeat Ganon and watch that gigantic ending sequence with the express purpose to hear that slow arpeggio begin.

The credits song is a new melody, not referenced in the game at all. It gives me a serious “you can rest now” vibe. The spinning pieces of triforce are back again, over a letterboxed view of faraway trees of Hyrule. It is gorgeous. And the credits roll over this scene for never long enough.

I know sound sampling has come a long way from the Super NES’ sound chip, but I don’t notice the barely-cheesy instrumentation. I only notice the chills I get when the Zelda theme sneaks into the melody for the first time.

You put this song up against anything from Star Wars and the worst result I’d give is a tie for first. Koji Kondo made a masterpiece with the entire score and sound design creating the language and mood of Link To The Past, and he somehow found a way to save the best for last. I couldn’t think of a more fitting way to end the perfect gameplay experience that is one of the all time video game classics, Legend of Zelda: A Link To The Past.