I have been playing video games for as long as I can remember. From a very young age, I have dabbled in games of nearly every genre; fighting, racing, sports, shooters, casual, puzzle, RPGs, and then some. One of the few genre’s I have not had the pleasure of partaking in has been the world of Massive Multiplayer Online games, or “MMOs” for short. Well, for the first time in my life, I dive into one of the most popular MMOs of today in “The Elder Scrolls Online” (ESO). After having my way with the game for the first few hours and being able to explore the world even for just a little bit, I am ready to share my thoughts.

The World of MMOs

I have never had much experience with MMOs, and my reason for it is much the same as everyone else’s; technology. For the better part of the early 2000s MMOs were largely only available to those with a strong enough computer set up. Early MMOs like “World of Warcraft” and “EVE Online” needed a constant internet connection, as well as a heartier way to play the games than the consoles of the time could offer. Sure, there were more casual games like “Runescape,” but I never partook.

With the advent of newer consoles that allow for constant internet connections and better performance, MMOs slowly started to make their way on to television screens starting at the turn of the decade. As of today, many of the most popular MMOs such as Destiny, Final Fantasy and ESO, are available on Playstation and Xbox. In my case, I have always been a Nintendo gamer, straying away from both the other major consoles as well as PC gaming. Once I finally received a PC strong enough (barely) to play these kinds of games, I still never gave it a shot. That is, until today. Now that I have delved into ESO and played an MMO for the first time in my life, I have a whole batch of new opinions on gaming, as well as ESO itself. 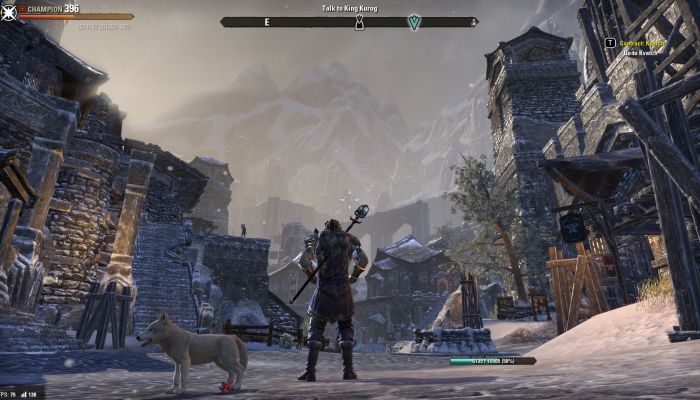 Right off the bat, I can say that ESO is a fantastic game. Whether it is for me or not, is another matter altogether. I started this adventure with truly no idea how to go about it. I have heard how “massive” these games really are, and the games really do live up to their names. MMOs like ESO truly have so much content packed inside of them, it can be pretty daunting to figure out what to do and where to start. Be that as it may, I was able to do a little research, figure out the direction I wanted to head in, and go on my merry way. Little did I know, I would be second-guessing myself at nearly every turn since I could not decide what I wanted to do in the incredibly huge game.

Like nearly every other MMO, the first thing I did in ESO was build my character. This process was very reminiscent of the character building in tabletop games like Dungeons and Dragons. I went through the steps, picked a race, class, and style for my character, and made him look as menacing and fierce as possible. I ended up building a Nord/warden, spent entirely too much time debating nearly every aspect of my character from the name to the class, and once I finally finished, I went on my merry way.

Obviously, I cannot compare ESO to other MMOs, but what I can do is compare it to other games in general, and I’ll just say this: ESO truly is a wonderfully built game. For someone who was playing this style of game for the very first time, I was able to learn what I was supposed to do and where, while also not feeling like the game was holding my hand. I went through the opening tutorial and figured out how the game was going to play right away, and it felt very comfortable. Granted, I also very much suspect that this is because of my experience with the mainline Elder Scrolls games such as Skyrim. Because of that, I did expect the two games to be somewhat similar, but they very much differentiated right away, and that was fine by me.

As I said before, I knew ahead of time that starting an MMO as large as ESO was a challenging task. ESO already has three very successful expansions, so I truly was able to go anywhere, start any quest, and discover whatever I wanted to find. While that is all amazing in theory, it was also my downfall. The allure of being able to go anywhere and do anything is wonderful, but perhaps that is why I have never played an MMO before now. I was so darn indecisive about what the first thing I should do is, that I kept going back and forth along different paths as I talked to new characters and learned more information. This is not at all a bad thing per se, it just speaks more to who I am as a gamer, and the experience I had playing ESO.

Even though I was not able to truly fall into any one major quest line just yet, I was still very much able to see exactly ESO has in store. The game has the best bits of Skyrim and Oblivion packed into it, as well as the best pits of what a modern MMO should be; open, approachable, and packed to the brim with stuff to do. In truth, ESO really was confusing at first. I had to figure out the menus, the combat, the quest lines and the world itself. Once I was able to do that within the first few hours, I could feel myself getting sucked into the world. I am not sure if this was an effect of just ESO or of MMOs as a whole, but it was wild feeling that for the very first time.

The only major negative during my time playing ESO is that I was playing the game by myself. We have already covered the Massive in “MMO,” but the other “M” stands for multiplayer, and boy is it necessary. I very well could have strapped on a headset and talked to every real person I met in the game, but that is only half the fun. Being able to explore and discover the world with a friend seems to be the absolute best way to play ESO and MMOs as a whole, and I do wish I will get to do that one day. Until then, I will have to rely on my own skills, and it was still a fun experience nonetheless.

The Elder Scrolls Online was my very first Massive Multiplayer Online game, and boy was it quite the experience. I went in only expecting a few things, and I got out of it way more than I bargained for. For a first-timer, I feel like I did not do too bad. But boy, when people say how easy it is to get hooked on games like these, I now absolutely understand. ESO is a fantastic game that deserves plenty more attention than the first few full days I was able to play, and I absolutely hope to give it all I’ve got in the future.