For a place of relentless torment and unending suffering, we sure go to Hell a lot. In our movies, books, and TV, we’re always happy to head down into the Lake of Fire or House of the Devil to see what life after death might look like for the very very naughty. Here are some of my personal favorite depictions of Hell in pop culture.

Possibly the victim of some mistranslation or censorship, Hell in the Dragonball Z universe became the Home for Infinite Losers (HFIL for short). With unusually colored fountains and club-wielding demons in shorts, the Hell that series protagonist Goku descends into after his first untimely death, is more silly and whimsical than your average fire-and-pitchfork affair. The only way for Goku to escape the HFIL and continue his journey, however, is to best the realm’s guardians in physical trials…which to someone who spends most of his days at his desk writing about different pop culture hells…is truly the most hellish part.

The Underworld – The Magician King by Lev Grossman

At some point in the sequel to Lev Grossman’s razor-sharp assessment of magic, privilege, and masculinity, the series protagonist Quentin has to go to the Underworld to retrieve something from a fallen comrade. What he’s faced with is a terrifying version of Hell that simply…is. Grossman, with the Magicians series, seeks to take the wind, pomp, and circumstance out of the Hero’s Journey and bring it into the crippling banal mythos of the modern world. To that end, Hell is a waiting room, a gymnasium full of the restless dead who play board games and ping pong to pass the timeless eternity of where they are. It’s hellish because, like any small room full of people, it’s a hell everyone makes for themselves out of the nothing that’s right in front of them. 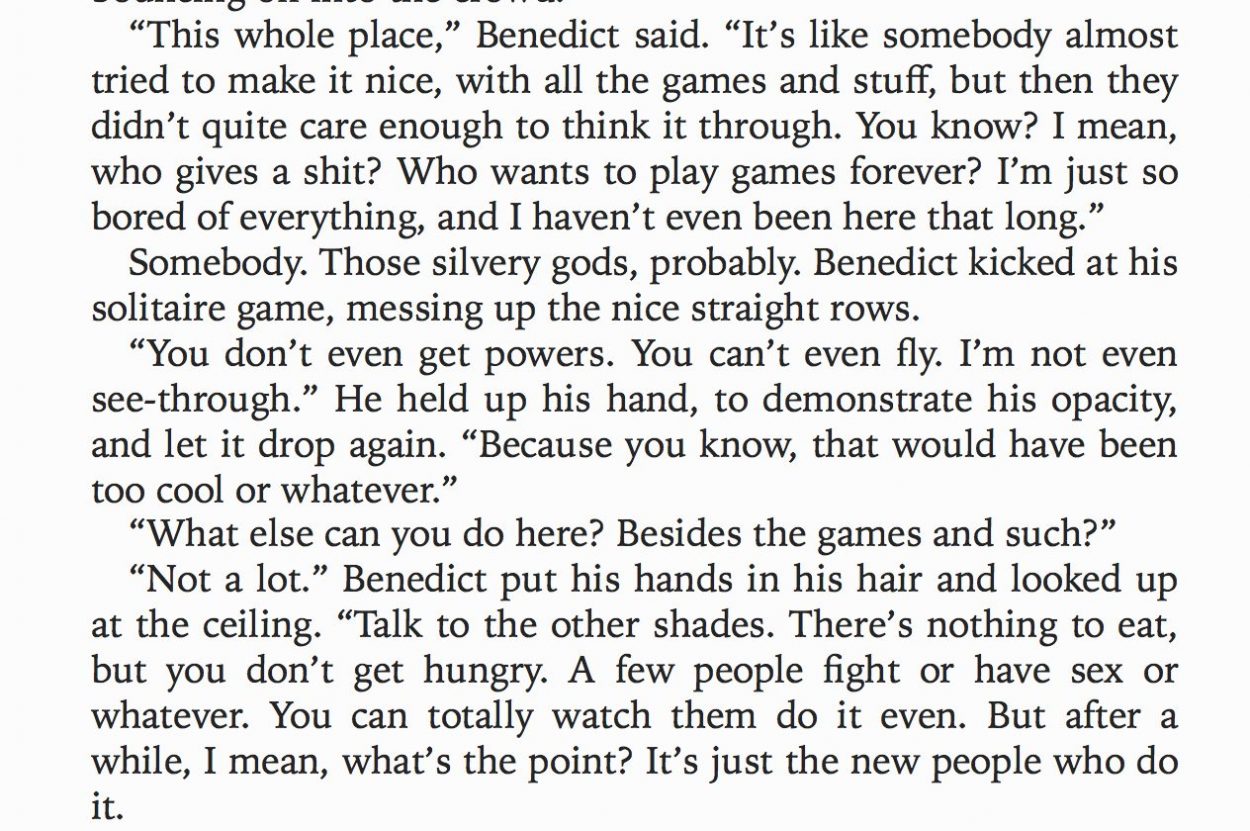 Conversely, the Hell of the Turkish film Baskin is a Jackson Pollock painting with Horrible Things instead of paint. A cadre of policemen answer a call to an abandoned building and instead encounter a terrifying literal hellscape of torture, sexual violence, and bag-headed nightmare people constantly writhing in the background, overseen by a gleefully sadistic pot-bellied Satan determined to bring these men to his own repugnant justice. If you haven’t seen Baskin and enjoy staring at Hell itself, this is the most upsetting and uncomfortably vivid depiction of a straightforward Bad Ending I’ve ever seen in any medium.

The Afterlife – The House That Jack Built

Despite his being known for gritty, verite cinema in line with his Dogme 95 aesthetics, Lars Von Trier’s The House That Jack Built is host to a truly mythic, spectacular depiction of the afterlife. Spoiler Alert for Jack Built, he dies at the end and descends into the afterlife with a guide who leads him from set piece to stunning set-piece of dark caverns, stone bridges, and staggeringly opulent tempestuous boat rides. It’s a captivating portrait of the heights and depths of life after the final candle is snuffed out. Moreover, it’s an interesting perspective on the final destination of every soul that Jack, a serial killer, sent his victims to.

With a joyously madcap sing-along tour from the Robot Devil, Futurama’s Robot Hell plays out like a series of Dante’s Inferno like carnival games. Bender, everyone’s favorite debaucherous robot is punished for his gambling, his cheating, and his cigar-smoking by being tied to a Wheel of Fortune-Esque punishment wheel, deep-fried, and then rolled and smoked like, as the Robot Devil puts it in song, “a panetela.” It’s important to remember, even in the face of endless oblivion of torture and agony and divine punishment, that there still can be whimsy, fun, and nightmarish singalong.

And now we come to the end, and, as his Guide told Dante as they left Hell behind them, “Must we perforce depart from so much evil.” And we, too, must leave this list of so much evil behind us. Those are my top 5 Hells I’ve ever looked at, the top 5 abysses that have stared back at me. Do they differ from yours? What are your favorite places to send the souls of the damned?