Welcome to What’s the Buzz, 25YL’s feature where members of our staff provide you with recommendations on a weekly basis. In our internet age, there is so much out there to think about watching, reading, listening to, etc., that it can be hard to separate the wheat from the chaff, filter out the noise, or find those diamonds in the rough. But have no fear! We’re here to help you do that thing I just described with three different metaphors. Each week a rotating cast of writers will offer their recommendations based on things they have discovered. They won’t always be new to the world, but they’ll be new to us, or we hope new to you. This week, Hawk Ripjaw discusses Jojo Rabbit, John Bernardy talks about Who Watched the Watchmen?, Anthony Divers is excited for End of the F***king World Season 2, and Jason Sheppard digs into the latest in the Bob Dylan Bootleg Series.

Hawk: I was lucky enough to have Taika Waititi’s Jojo Rabbit playing within 15 minutes of me this weekend. Having watched it, I can say that even if it’s an hour away, it’s worth making a day of it to go see because this movie is absolutely miraculous.

Jojo Rabbit (Roman Griffin Davis) is a 10-year-old boy living in Nazi Germany and is obsessed with someday becoming a Nazi. This child has been completely indoctrinated, and believes sight unseen everything that the regime has taught. His bedroom is filled with propaganda and his imaginary friend is a very quirky and laid-back Hitler. And just like any imaginary friend, this Hitler (Taika Waititi) shows up to hang out and offer advice to Jojo. This is low-key brilliant as a narrative decision, as Jojo is driven only by what he’s been told, and he idealizes Hitler first and foremost as a best friend—as a child, he really can’t process the horrors of the regime and so his view of Hitler is filtered through his 10-year-old eyes.

Jojo eventually learns that his mother (Scarlett Johannsson) is harboring a young Jewish girl named Elsa (Thomasin McKenzie)  in their home, and he begins to have to confront what he’s been taught by the Nazi machine. The movie is billed as an “anti-hate satire” and that rings truer than you’d expect. It’s less of a broad comedy like Waititi’s other films such as Hunt for the Wilderpeople and Thor: Ragnarok but still has plenty of humor, and feels far more real on a human level as well.

The nuances to Davis and McKenzie’s performances are extremely impressive, resulting in an achingly compelling dynamic as Jojo’s loving, human side starts to overcome his indoctrination. Davis in particular does some seriously heavy lifting with his character’s development as he struggles to comes to terms with everything he’s been taught and everything he’s learning anew in a Germany at the end of the Nazi rule. It’s a wonderful film featuring every spectrum of emotion (including a couple of genuinely tear-jerking moments) that I wanted to rewatch the moment I finished it. Absolutely take time to seek this one out.

Who Watched the Watchmen?

John: There are a boatload of Watchmen podcasts, all bearing similar looks and names, and to cut through some of the confusion, I’ll be reviewing one of them every week of Watchmen’s run on HBO. Who knows, maybe you’ll meet your new favorite podcast along the way.

This week, I’m looking into the Who Watched The Watchmen? Podcast from MCUCast. One of the two hosts also hosts the Marvel Cinematic Universe Podcast and the other also hosts Mostly DC Onscreen. Their Watchmen podcast comes out once a week either Monday or Tuesday. They give off the vibe of two guys hanging out even when they regularly plug their other podcasts, and—despite not talking about Peteypedia at all—they excel at using conjecture for some fun chance-taking theories that make it one of my favorites each week.

This week, their episode covers S1E3 “She Was Killed By Space Junk”. The hosts begin by catching up on life but quickly profess their love for Laurie Blake as a character. They wonder if this episode was written first, and the first two episodes were written so the audience had room to care about the Tulsa characters before Laurie arrived and took over the show.

The hosts discuss how Keene and 7K relate to each other, what Laurie meant about trying to kill god—is she going to try to do that for real?—and Laurie’s nihilism. They notice the confessional booths are made by Trieu, love how history is included to educate us, and how the answer to both the car going up and going down is the same: what the fuck?

The theories this time around relate to the 7K’s probability of being a false flag operation, whether Ozymandias is in a new body or not, whether we’ve seen the real Ozymandias, and the probabilities of Doctor Manhattan holding him hostage.

The hosts swing for the fences with their ideas, and I’m not sure how correct they’ll be at the end, but I sure like the gears of thought they get turning in my own head. It’s less about accuracy for me and more about the exploring. If you tend to think similarly, you’ll probably want to give this one a try.

Listen to episodes of Who Watched The Watchmen on Podbay.

Jason: Ever since the first official Bob Dylan Bootleg Series was released in March, 1991, Dylan lovers have not been able to get enough unearthed treasures found within the vaults of Columbia Records, which has been Dylan’s main label since 1962. At first, there would be many years pass before a new installment in the Bootleg Series would find it’s way to the public. The second series wasn’t released until 1998 and the third, in 2002. In recent years however, the releases sped up considerably and now fans are usually gifted with a Bootleg Series set every year. And these sets have gotten larger as well. Last year’s edition, Vol. 14 – More Blood, More Tracks featuring unreleased material from Dylan’s masterpiece Blood on the Tracks, was six discs long and the previous set, The Cutting Edge, was available in a 18(!) disc collector’s set.

The newest release in the series, Bob Dylan – Travelin’ Thru – The Bootleg Series Vol. 15 comes in at a brisk three discs but this time it’s a matter of quality over quantity as this set is absolute gold for Dylan fans. Here we are treated to unreleased tracks, outtakes and studio sessions from Dylan’s John Wesley Harding and Nashville Skyline period. In collaboration with Johnny Cash, Dylan surprised everyone in 1968 when he went country (and shocked everyone with his new voice as a result of having recently given up smoking). Dylan fans didn’t quite know what to make of this style and sound but songs such as “Lay Lady Lay” did go on to become mild hits and “All Along the Watchtower” was of course famously adapted by none other than Jimi Hendrix. While the original Nashville Skyline featured one duet between Dylan and Cash on the album (“Girl From the North Country”) this set features many duets between the two iconic artists—just two lovers of country music jamming to each others songs in a mutual showing of deep respect for one another.

Fans of John Wesley Harding will love the set’s opening track, a spirited rendition of ”Drifter’s Escape” which differs from the original as it does without the harmonica intro and for Skyline fans, there’s the previously unreleased “Western Road” and collaborations between Dylan and Cash on “I Still Miss Someone,” “Ring of Fire,” and “To Be Alone with You.” Other gems included here are the original mono recordings of Dylan’s live appearances on ABC’s The Johnny Cash Show from 1969-1971. Some material from this period was explored in Vol. 10 of the Bootleg Series which focused on Dylan’s Self Portrait period which completely bewildered Dylan fans upon release. Today however, this is now considered to be one of the most interesting period’s in Dylan’s history. Funny how time does that. 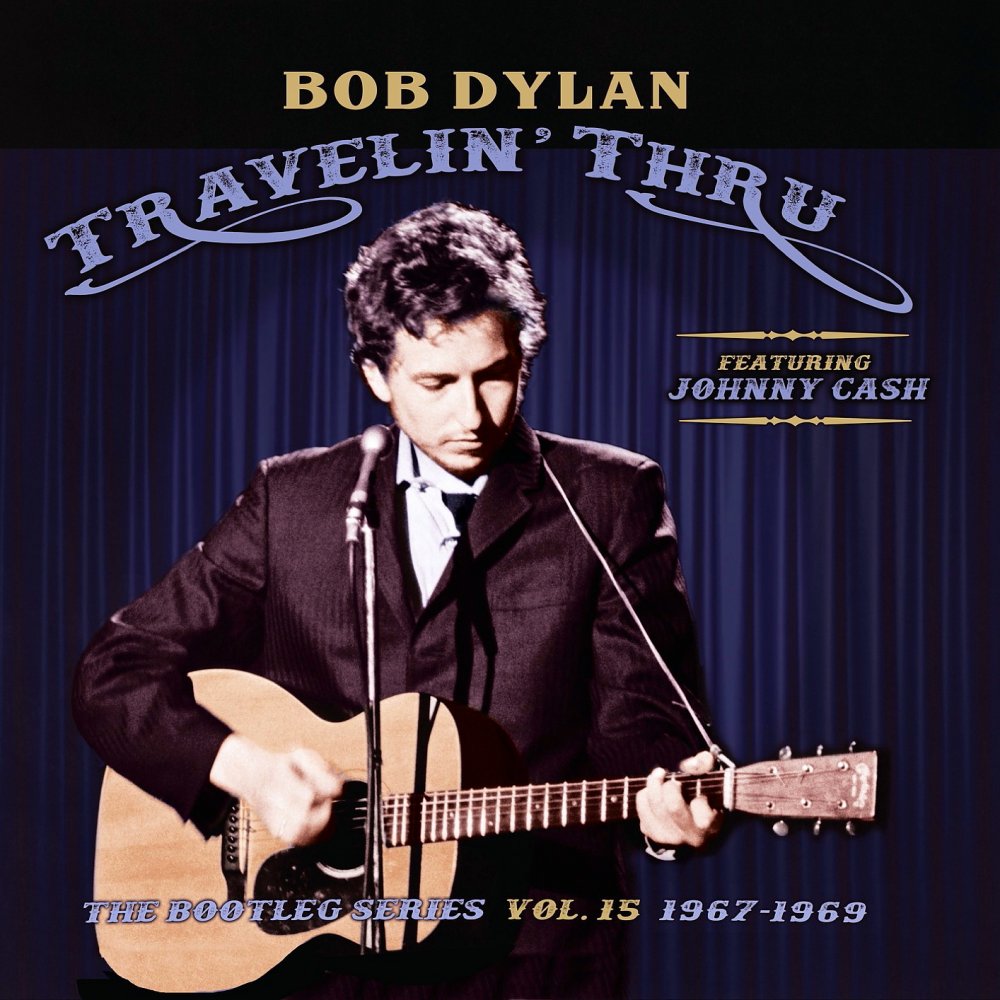 The End of the F***king World Season 2

Anthony: From out of nowhere, one of my favorite TV shows from recent years is back with a bang, as Channel 4 released all eight episodes of The End of The F***king World Season 2 onto their online streaming service All 4. I don’t know how I was unaware that this show was returning, but it’s made my entire month finding out it’s back. Some spoilers for Season 1 and beginning of Season 2 ahead.

I’m currently half way through the season and it hasn’t disappointed. Jessica Barden is back as the moody yet awesome Alyssa, reunited with Alex Lawther’s loveable yet strange James. After the explosive cliff-hanger at the end of Season 1 left viewers worried for James’ life, I am overjoyed to see his return. These two young actors are just brilliant, and the chemistry between them hasn’t dulled one bit. New character Bonnie, played by the gorgeous Naomi Ackie, fits into their messed up world perfectly, and is a great addition to the already fantastic cast.

The story picks up one year after the events unfolded at the beach in Season 1, where we saw James take the blame for what had happened only to be shot down by the police. Alyssa has moved away from her home town along with her mother and siblings. They are staying with her Auntie who owns her own American style diner, and she gives Alyssa a waitress job to keep her busy. We’re treated to a flashback of the hilarious diner scene in Season 1, as Alyssa points out the irony in her mundane new role. She is trying to move on with her life but can’t quite stop thinking about James.

Speaking of James, he’s been recovering in hospital, under 24 hour police surveillance after the shooting. He’s lost the use of his legs but is recovering slowly. The two haven’t been allowed to see each other, and Alyssa believes James hates her after her mother talks him into writing her a harsh break up letter. And then there’s Bonnie. Strange little Bonnie who fell in love with a sexual predator lecturer at the University she works at. The same lecturer James killed in Season 1 after he tried to sexually assault Alyssa. Cue the revenge story. Bonnie wants pay back for losing the man of her dreams, and she has James and Alyssa in her sights.

I don’t want to give anything else away at this point, but it’s safe to say that Season 2 is just as explosive as Season 1, and I can’t wait to watch the rest of it. It genuinely feels like I’ve been reunited with an old friend seeing Jessica and Alex back together again. I’m ecstatic that the show has returned and I just know I’m going to love it just as much, if not more, than I did Season 1.

Those are our recommendations this week. What would be yours? Let us know in the comments!