I had two big fears going into the Rick and Morty Season 4 premiere. One was that the show would no longer have truly interesting premises that are conceptually complex. The writing could have easily gotten much lazier, and doubled-down on the memes and gags that have always been the veneer of its success. Mr Poopy-Butthole and “Wubba-Lubba-Dub-Dub” are fun, but they’re not what keeps me coming back. What keeps me coming back are episodes that test the boundaries of the definition of slavery, or episodes that walk through what our best selves and worst selves would discuss if they ever met face to face, and how each trait would end up in each self. That’s the stuff only Rick and Morty can pull off.

The other big fear I had would be that the writing would get lazier, and settle into a pattern of storytelling and plotting that might not have any flaws to speak of, but is clearly paint-by-numbers. This is a different fear from the first one. Each episode could have a different complex theme from the one before it, but they might all still follow the same pattern: Rick starts an adventure, Morty has misgivings, Rick sweetens the pot, Morty tags along but screws the plan up, Rick almost rage-quits but the stakes are too high, etc. We’ve had slight glimmers of this before, and it was a legitimate fear that after two full years away—and with the added comfort of locking in seven more years of employment—the edge of the writers might have worn off.

Thankfully, the first five minutes of Sunday’s season premiere handily dispelled both of these fears. The conceptually complex premise appeared nearly immediately. Rick and Morty are on an alien planet mining a very special kind of stone out of the ground. When you’re holding them, these stones have the power to show you how you’re going to die, given the course of action you’re currently on. Crucially, because you can change your decision-making while you’re holding this stone, your visualizations of how you will die will change as you alter your actions. You can just cycle through all your possible actions until you start seeing the way you want to die.

It’s an interesting concept. And, even better, it’s a concept that ended up having consequences: Because of Morty altering his decisions while holding the stone, it caused Rick to die. For real. And just as a reminder, we’re still in the first five minutes of the show. Not only is this an imaginatively developed, conceptually complex premise, but it’s also consequence-driven storytelling that’s willing to chart its own path, away from the norm.

This device of the stone is contrasted by this episode’s other plot device that runs parallel alongside the stone: Rick’s interdimensional internet of things, which allows him to re-spawn in an alternate universe after his death, with essentially infinite backups in case he doesn’t like the universe he just spawned into (even if each new universe is randomly selected). These two plot devices expose for us the limits of ego-centric utilitarianism, which we can look at in a couple of ways. One version of utilitarianism might be always orienting your goals to their very final pay-off. Just like Morty: he’s playing the long game and is in it to win it. But on the other hand, then you’re missing out on life while it’s happening. By the end of the episode, Morty is essentially brainwashed and can barely even recognize Jessica when she’s talking to him. As Rick, however, is respawning in dimension after dimension, he is doing nothing but living in the moment. Rick fighting fascists and eating larvae might be the most in-the-moment Rick we’ve ever seen. 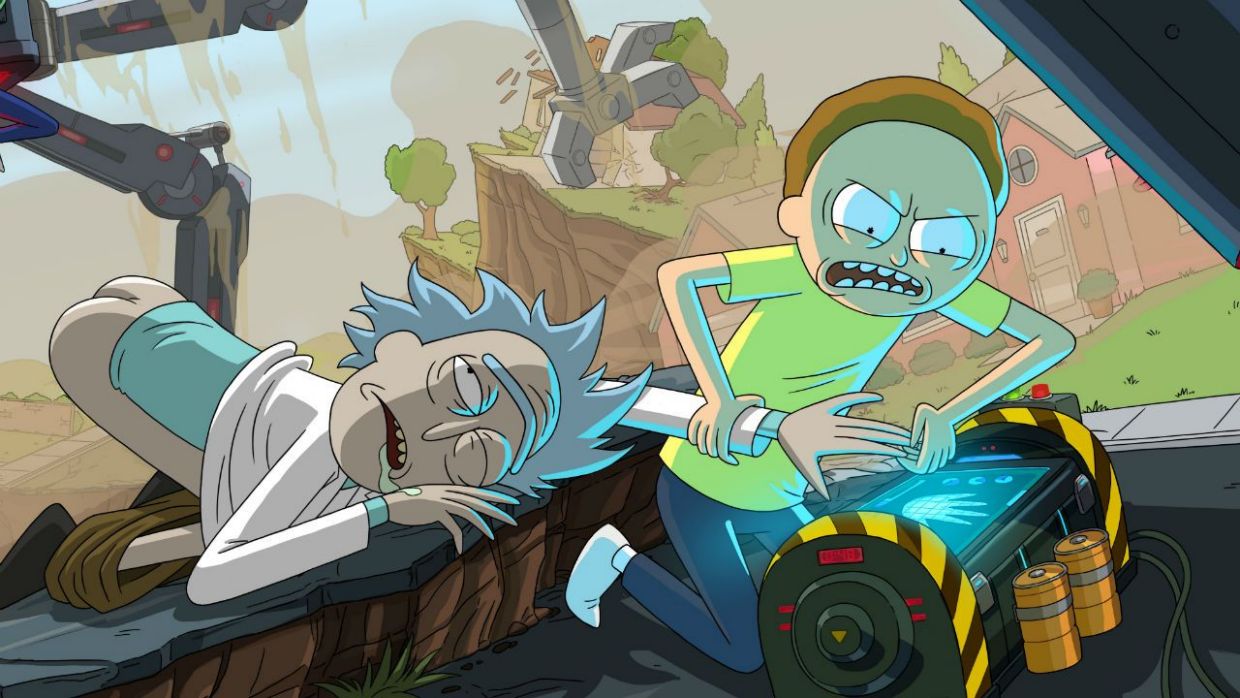 Another way to view this episode’s utilitarian comparison is over the idea of community. As Morty becomes fixated on the idea of dying with Jessica, he slowly loses all community he has in his life. First, he causes himself to lose Rick, then he loses his class and his town, then he even loses Jessica herself when she asks him to go skinny-dipping. This is finally symbolized when he’s literally out in the desert, alone. Rick, on the other hand, has nothing but community. He first has a community with (multiple) families of fascists and then has community with a much nicer family of wasp-people, who ultimately help him get home. This is finally symbolized at the end of the episode when Rick is willingly hanging out with his family on the driveway. Rick has only rarely done that before, if ever. So, believe it or not, Rick actually ends up symbolizing the hero in this story.

He tried to save Morty from his own impaired driving, ultimately to the point of death. He then refused to live in fascist universes, trying to openly kill one fascist, then actually killing himself when got sick of the next set of fascists. He exhibited openness to new things when he made friends with a wasp family whom he had literally nothing in common with—symbolized by the grotesque larvae dinner—and that ended up paying off, when he rode Wasp-Rick to victory and ultimately saved the day, just like a white knight.

Alternately, Morty exhibited quite a bit of malice and vice. He willingly put Rick’s life in danger as they were flying, he then refused to bring Rick back to life when he had the chance to. He forgot about his studies and eventually killed dozens, if not hundreds of people. All simply because of his warped desire to be with Jessica. And this warped desire was symbolized by his final transformation out in the desert, which turned him into a monster—just like a dragon that needed to be slain.

Take Morty’s arc together with Rick’s arc, and you have a very new kind of Rick and Morty episode! Morty, instead of being the innocent victim and voice of reason, is the story’s corrupting element and an example of temptation’s perils. And Rick, instead of being the amoral Meiser with the mind of a genius, ends up actually being the one who suffers the most, and in the end—when they’re talking in the driveway—he pretty much forgives Morty for not reviving him.

So there we have it; the first episode of Rick and Morty Season 4 is in the books. Conceptually rich premises, innovative storytelling, consequence-driven plotting, fully developed and surprising character arcs, and a couple funny jokes along the way. Season 4 is off to a promising start. If that’s not enough for you, then you need to loosen up and enjoy life while it’s here. C’mon, let’s go skinny dipping.