The magical aspect of television is that it allows you to sometimes express your emotions by demonstrating how you relate to a certain character, or how a particular plot line pulls at your heartstrings. It’s odd to think that a show like American Horror Story, one that thrives on being as gory and spine tingly as possible, could provide material that allows one to feel a sense of compassion over a character, let alone an entire story.

When American Horror Story (AHS) graced our televisions with its fourth season, Freak Show, it did its best work by pulling on the emotions of its viewers. For many of us, Elsa Mars (Jessica Lange) and her traveling group of “Monsters” (as she calls them) managed to make our hearts grow in size. Then, we were destroyed as we lost most of these same characters throughout the season. 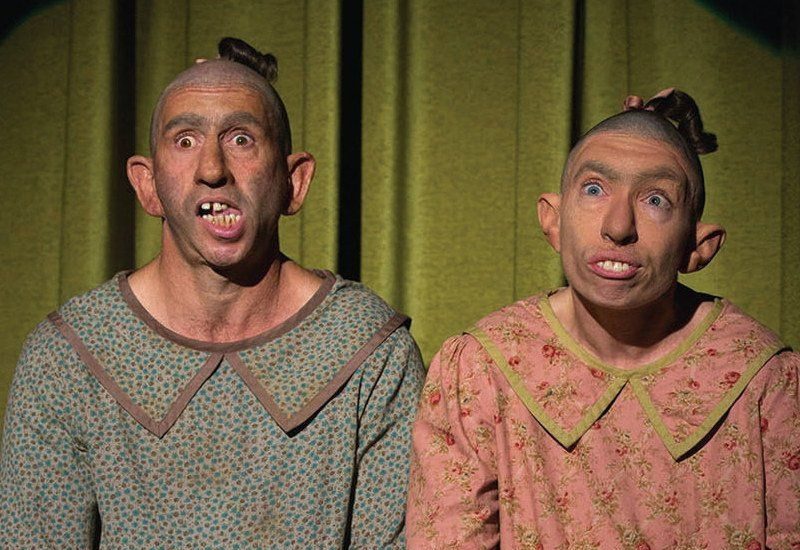 At least for me, the hardest farewell to watch was Pepper’s (Naomi Grossman). American Horror Story used Pepper as its way to bridge the gap between its second season (Asylum) and its fourth. In doing so, it allowed for the series to produce “Orphans”, one of its most touching episodes to date.

Pepper (who was previously seen in the second season (AHS Asylum) and Salty suffer from microcephaly, where their brains were underdeveloped in utero, causing their heads to be abnormally smaller than that of your average person. Though they are unable to communicate like everyone else, it doesn’t mean that they don’t understand emotions. They are still humans, and humans, no matter what their mental capacity, understand the concept of loneliness.

“They see shame. They see human garbage. So I went to the place where people throw other people away. An orphanage.” – Elsa Mars

Pepper has known nothing but being alone. Before Elsa Mars, the ringleader of the traveling freak show that the season focuses on, had taken Pepper in, she found her abandoned by her sister at an orphanage. As Pepper got used to her new life, she began to crave more. Elsa says of Pepper, “she was a woman now, and had maternal needs”. In order to meet those needs, Elsa acquired Ma Petite (Jyoti Amge).

Ma Petite suffers from a serve case of achondroplasia, where the torso is the correct size but the arms and the legs remain short. She stands at a little over 2ft tall. To everyone else she is an adult, but Pepper sees her as a child that needs care.

Allowing Pepper the illusion of being a mother only settled a part of her coming into adult womanhood. Like any young woman out in the world, Pepper wanted romance. She wanted to feel what it was like to be in love and have someone feel the same. For that, Elsa located Salty and it became what she named “a love story for the ages.”

Pepper finally had a husband in Salty and a daughter in Ma Petite. The perfect, loving family.

Unfortunately, this is AHS and nothing happy stays so for very long. In a previous episode, unbeknownst to anyone, Strong Man Dell (Michael Chiklis) smothers Ma Petite to death in a bear hug.

As if losing her daughter wasn’t bad enough, “Orphans” opens with Salty having passed away in his sleep after having a stroke.

In one short period, Pepper goes from having the family she had longed for to being completely alone. Elsa is in the middle of planning her big break in Hollywood, and everyone else around the camp doesn’t fully comprehend the situation in which Pepper finds herself. With no verbal language to express her remorse, she uses her anger to act out.

Desiree Dupree (Angela Bassett) recommends that Elsa get in touch with Pepper’s sister.—yes, the same sister that dropped her into the orphanage to begin with. Maybe what Pepper needs is to be surrounded by her “family”…her real family.

Family. The word is correct, but it is also infuriating. As I’ve covered previously, the way family has been perceived in television has been changing. It’s not about sharing blood anymore. Honestly, sometimes your blood relations prove to be more harmful than good. Family, true family, can be where ever you feel the safest. Wherever you are allowed to be yourself, without being judged…that is family.

Elsa understands that Pepper’s real family is with her and her traveling band of misfits. She also understands that once she leaves for Hollywood, she doesn’t know if the show will continue or if everyone will separate. If they separate, then Pepper would be even more alone, and thus Elsa makes a hard decision. She tracks down Pepper’s sister, Rita Gayheart (Mare Winningham), and talks her into taking Pepper back.

“I understand you even without words. I knew all you ever wanted was a family. So you remember, no matter how far away I am, I will always be your family” – Elsa Mars

As much as I love this episode of AHS, when it arrives at the scene shared between Pepper and Elsa I can’t help but have to leave the room. It’s not because it’s poorly done. It’s quite the opposite. This scene is so beautifully written that it brings up many mixed emotions and memories in my head.

Pepper’s confusion of being left in an unfamiliar home and Elsa reassuring her that all will be well…it’s the same emotions and scene that played out when I was called into the guidance counselor’s office and told that I was not going to be going home that day. That I had a social worker coming to pick me up, because we were being placed into foster care.

It was the feeling after every visit, when I watched my parents say goodbye to my siblings and tell them everything was going to be OK, and then they would tell me the same. Elsa telling Pepper not to cry and to be strong are just my social workers telling me that it would be OK every time they dropped me off at some new foster home. 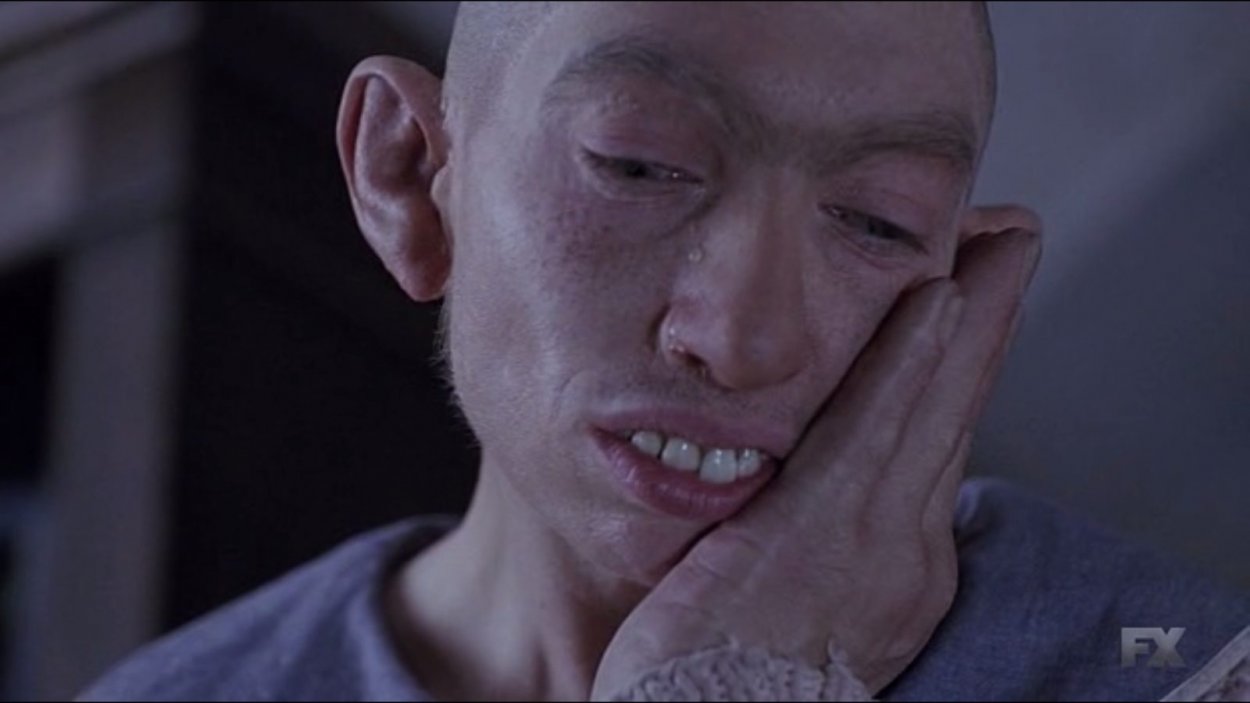 Over time, Pepper’s new “home” begins to fall apart. Her sister is an alcoholic, and her brother in-law (Matthew Glave) is alluded to sexually abusing her. Pepper basically becomes a maid and a nanny to Rita’s newborn son (who is also deformed.) This is until she is framed for murdering the baby. A claim that we, as an audience, know is completely false. Pepper has no way of defending herself though, and is sent to live out the rest of her life in an asylum.

Pepper has now lost two children (Ma Petite and Rita’s son) and been removed from two homes (Elsa’s freak show and her sister’s house). The asylum just acts as another orphanage. It’s another place where people can throw other people away.

Also in this episode, Maggie Esmerelda (Emma Roberts) finds herself distraught over her new boyfriend, Jimmy (Evan Peters) having been framed for murder. Maggie is one of the con artist team that have infiltrated the freak show in order to kill them off and sell their physical anomalies to a museum. Finally, she confesses her real intention of being at the camp. She explains how she was an orphan growing up and didn’t have anyone. Instead she took to pick pocketing which eventually lead to her meeting Stanley (Denis O’ Hare). He saw potential in her and decided to take her under his wing.

Maggie’s story works as a parallel to Pepper’s. As similar in some aspects that they are, they are still vastly different. Both were thrown away by their families and raised by a surrogate parent. Pepper had Elsa and Maggie had Stanley.

Pepper had a family that actually cared for her, whereas when Maggie found Stanley, they could only tolerate one another. There wasn’t love between them. Stanley saw potential for a partner and a scapegoat, nothing more. That is shown as Maggie starts to question her part in Stanley’s big scheme, and he distances himself from her.

Even though Elsa left Pepper, she did it out of love. She thought what she was doing was in Pepper’s best interest. She tells Pepper that she is never truly alone because every time Pepper places her hand to her cheek, she should remember that Elsa is out there somewhere, thinking of her. Stanley would never exhibit that sort of love and affection to Maggie. It’s because of this that Maggie never really has the ability to open herself to anyone else, unless it’s out of fear.

You can either allow fear of loneliness to overcome and make you distance yourself from others, such as we see with Stanley and Maggie. Or it can allow you to love even harder, as seen through Pepper.

When I’ve talked about my experiences, I’ve been asked the same two questions. “How did you survive this type of childhood?” and “how are you not pregnant and in a ditch somewhere?” The answer is, because I followed Pepper’s route. I learned to love harder by appreciating the good people I had in my life.

For a show that is all about the gore and bloodshed, American Horror Story was able to craft a caring episode that is touching, and showcases how amazing it could be. Not enough people talk about the brilliance of this season, and really it deserves more love. We can all learn from Pepper.