This article is now available as an audio experience for our Patreon supporters. To become a Patron and listen to our audio articles visit here: 1917 Audio Article

Kinetically engineered to simulate real-time, 1917 moves with a propulsive momentum like no other film of 2019 and no other combat flick of recent memory. Its velocity matches the unyielding pull of war itself. That compelling force defines a soldier’s moral sense of duty and keeps a man watching, trekking, running, fighting, and downright surviving. 1917 is all about that pull and concentrates its adrenaline into a relentless experience that will strafe your senses, from the hairs on the back of your neck to the fidgeting nerves that bounce your toes.

With zero backstory (and none needed really), 1917 takes immediate initiative. The day is April 6, 1917, during The Great War near the Hindenburg Line of Operation Alberich. A tracking zoom on serene flowers in a green field gives way to the sleeping silence of a pair of nondescript British soldiers rousing to begin their day. Lance Corporals Blake (the busy Dean-Charles Chapman of The King and Blinded by the Light) and Schofield (Captain Fantastic’s George McKay) grab their gear and walk from that pastoral fringe of nature deeper into a scarred foreground. The continuing track reveals trenches where the green is stripped away by the sandbags and makeshift wood frames before all bright colors become totally vacant. This steady submergence begins our voyeuristic navigation through this ominous setting.

The two friends check-in and receive recon orders to get urgent word from General Enimore (Oscar winner Colin Firth) to a disconnected Colonel Mackenzie (Benedict Cumberbatch) several miles away. Based on new aerial intelligence, Mackenzie does not know his division of 1,600 men is heading straight into the certain slaughter of a newly fortified German trench position that will outnumber his forces three-fold in men and firepower. The men have until the next morning to get to Mackenzie.

Among Mackenzie’s possibly doomed men is Blake’s older brother (Richard Madden of Cinderella). His survival becomes an instant motivator, the epitome of the lengths one will go to save their family, pushing these two troopers beyond the front. Schofield may not share Blake’s immediate stake, but his temperament also denotes a man with something or someone to live for. His own character reveals itself as the journey evolves.

Be that as it may, this mission is no idyllic stroll down a country road. Getting there requires crossing No Man’s Land, German-occupied territory, and villages fraught with hidden dangers. Everyone knows a suicide mission when they see one. Friendly chaps and fellow grunts encounter Blake and Schofield to caution them in an exasperating fashion “You’ll never make it.” Each time, the naysayers are answered simply with a resolute “Yes, I will.”

Where director Sam Mendes has outdone himself, and that is high praise considering his towering resume, is in the quality of immersion. The visual, aural, and emotional layers of this film are utterly astounding. The assembled collection of masterly craftsmen furnish the ingenious wonder that more than matches the indomitable will of this narrative written by Mendes and Krysty Wilson-Cairns of Penny Dreadful.

That creative thrust is led by the key re-teaming of Mendes’ Skyfall partners and Blade Runner 2049 Oscar winners Dennis Gassner and Roger Deakins. The attention to details of Gassner’s environments evoke all levels of disparaging disaster and twisted terror. The daring camera placements, crane movements, and light absorption captured by Deakins are nothing short of perfection. He remains the best DP in the business. Empowered by Steadicam operator Pete Cavaciuit and drone photography director John Marzano, Roger’s delicate touch with both magic hour vistas and hellfire-lit night scenes is beyond impressive and worthy of that second Academy Award for his legacy. 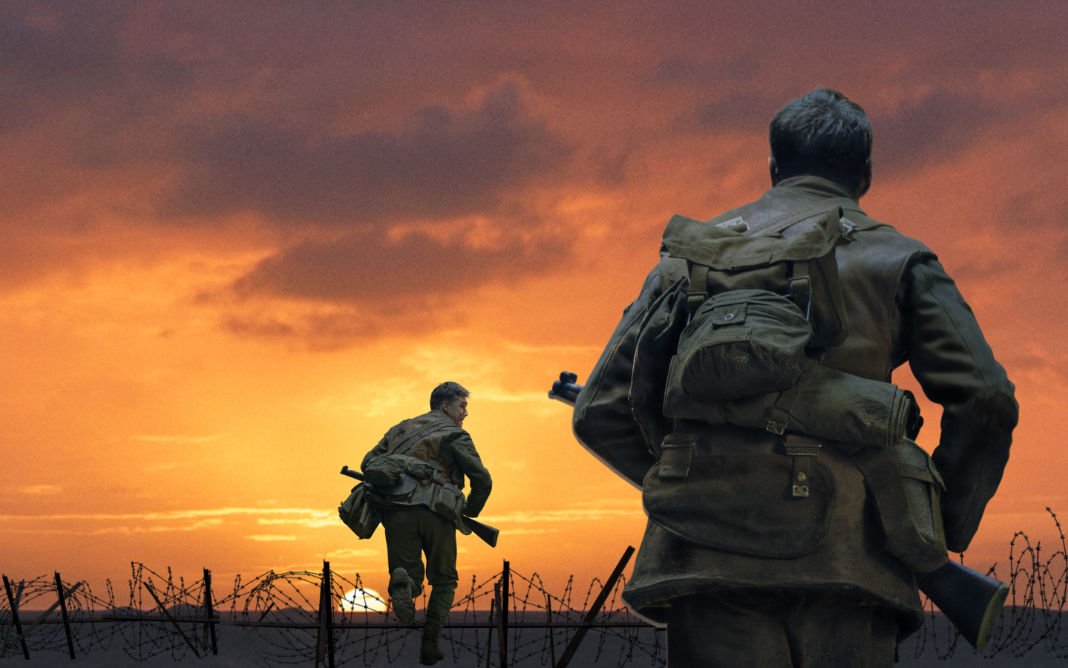 The sharp stratagem of 1917 moving in and around this menacing arena comes from the expert editing of Dunkirk Academy Award winner Lee Smith. Hiding screen-wipe cuts in passing bodies, shadows, architectural structures, and other seamless visual effects, Smith’s distillation of Deakins’ footage makes the film move and feel like one lean, continuous take. Needless to say, the syncs are flawless and that unbelievable flowing effect locks all eyes to the screen with optical handcuffs.

And the sound! Oh my, the sound! The ever-present acoustic aura creates a quickening pace to everything that transpires. The sound editing work of Oliver Tarney and mixing by Stuart Wilson bounce every crackle and bated breath with rattling intensity. That bombastic stimulus is made all the grander by Thomas Newman’s Oscar-worthy musical score. Its dirge mixing anticipation and cardiac calamity drills into your veins. See this movie on the largest and loudest screen you can find. While all the technical aspects are truly superior, the thematic core of 1917 encircles the binds of duty on display.

The bell-ringing word for all of this is “harrowing,” which can be defined as “acutely distressing.” All of its thesaurus-bound varieties, from agonizing and tormenting to harsh and heartrending, exemplify the human experience of this thriller. The stunt coordination of Ben Cooke and his team make the treacherous gauntlet and every close scrape rattle with these qualities.

As circumstances tighten, Schofield, with his differences of agreement and disagreement and a recurring series of question marks about earned and lost medals, becomes our guiding point of focus and hope. George McKay does not pause his character for long monologues. There are no flashy asides to wax poetically on the lamentations war or his unreleased feelings. Instead, both the actor and the character simply endure and we feel every stress point.

War must be endured.  All of those World War I combatants from over a century ago, including a family member of the Mendes lineage named in tribute during the end credits, may not be distinctly special or flush with a mythic history of certain destiny. Yet, what they endured was shattering and strengthening at the same time. The draw to see summoned bravery and weathered tragedy in conflict will always be hugely magnetic. Rising with ambitious scale and a colossal level of enthrallment, 1917 will join cinemas greatest exemplars of such captivation.