Rick and Morty S4E5 was absolutely hysterical, the best episode yet of the season yet by far, and in the top 5 all-time Rick and Morty episodes. This episode pulled everything together and showed none of the seams. Multiple storylines were going on simultaneously, each self-sufficient in its own right, yet they all worked together flawlessly. Rick and Morty entered new conceptual ground with its first true episode about out-and-out time travel. It was fast-paced and nearly dizzying in the exact right way (S3E1 comes to mind). Rick’s instant head machine is a perfect example of how Rick and Morty has mastered the joke that unfolds slowly enough to be silently shocking but concludes quick enough to still qualify as a throwaway joke. No other show on TV is really able to hit that sweet spot with such brazen authority.

The episode has two separate interweaving threads. The main thread involves Rick dragging Morty through a space adventure that hinges on them interacting with a different planet’s snake civilization. Morty inadvertently kills a snake and replaces it with an Earth snake, who’s taken in and probed by the snake civilization. These snakes eventually attack Rick and Morty, who in the end prevail over them by use of clever time travel and suits of armor. The second thread of the episode involves Jerry battling with levitation shoes that Rick gave him to help hang Christmas decorations. It’s actually quite engaging, working as a commentary on Jerry’s masculinity and ultimately his relationship with Beth.

Now, let’s get down to business. There are multiple reasons this episode was a grand slam. To begin with, this episode’s storytelling was very innovative. The time travel involved almost nonlinear storytelling. The first segment of just snake hissing forced the audience to pay attention and follow along exclusively by nonverbal cues. Then the second snake hissing segment added time travel on top of it, demanding the audience follow the implications of the butterfly effect still only on nonverbal cues. For someone looking for television that’s plotted carefully and intricately but still wraps within half an hour, this is it.

And as a second point, Harmon’s favorite activity in plotting Rick and Morty is perhaps his commentary on other forms of pop culture, and this episode was a masterclass. The dominant parody of the episode is a very developed riff on Terminator, with the snake soldiers filling in as terminators, hopping back and forth through time as they fight for the survival of their civilization and society against various threats (among them are Rick and Snake Hitler). Since anyone can use time travel to arrive in the present from any point in the past or future, it’s fun watching the episode cycle through various iterations of snake technology, as we see snakes from all points in their timeline arrive to fight in our present.

But Harmon’s cultural commentary doesn’t stop there. That first snake scene is clearly a riff on those Michael Bay-style films in which government bureaucracies take on unfolding disasters. Now that I think about it, that vibe might have originated in the first Godzilla films. So, if a lizard story inspired the setting of this snake story, that would be an additional cultural call-back. In a similar vein, I occasionally got whiffs of Planet of the Apes, with the commentary on captivity, animal intelligence, and the emotional investment in the lives of another species. 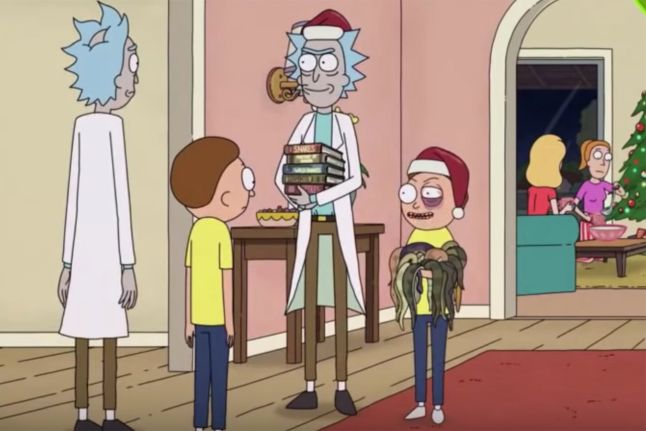 Further, I’m sure the time travel was more a product of the terminator parody than anything else, but it must be admitted that time travel echoes all the way back to Rick and Morty’s original inspiration in Back to the Future. Watching Morty tag along with Rick on time travel adventures noticeably reminds one of watching Marty tag along with Doc on similar time travel adventures. In a way, as we slide into that paradigm, it refreshes the magic of Rick and Morty, because we view them just as a drunken, broken Doc and a fearful, emotionally neutered Marty. This reference is nailed in place at the 16-minute mark, in Snake MIT, when there’s a poster of Back to the Future in the background. Harmon sprinkled in other various references as well. The theme of Christmas was present throughout, especially at the beginning. And of course, the shot at SNL was just fantastic, as was the nod to Click.

Thirdly, every single minute of the episode contained loads of character development. Morty’s insecurity and general timidity are acknowledged, but so are his budding bravery and self-sufficiency in how he gets the new snake and steals Rick’s keys to deliver it. All facets of Rick’s character were meaningfully on display, including his drunkenness allowing Morty to seize the keys, and then his fiery wrath saving Rick and Morty from the snakes Morty agitated earlier. Jerry, of course, had a riveting arc throughout out the episode. First trying to be a big man hanging the decorations, then a proud neighborhood athlete, then a humiliated man in the sky, then a vindicated bar fly, then a doubly humiliated man in the sky, then a finally redeemed airplane passenger (and also inadvertently a mass murderer). 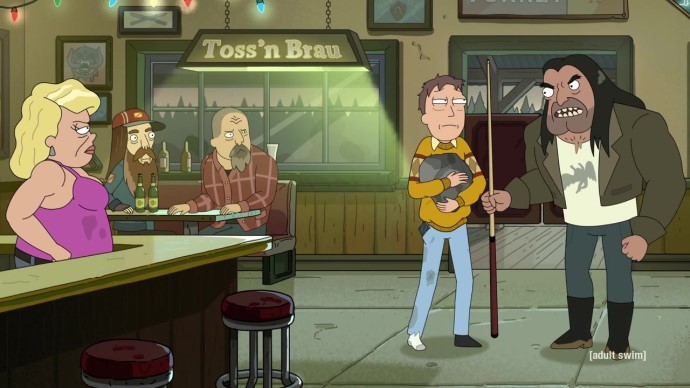 Which brings us to a random observation about this episode that should be noted: It could serve as an ideal sample episode for anyone who has never seen Rick and Morty before. There are no circumstances or character relations from previous stories that are necessary to understand the episode, as far as I can tell. It is a fast-paced, thrilling, character-driven story that retains its power even if the viewer hasn’t seen the previous four and a half seasons of the show. That’s a special quality; even though there are extra references only for people who’ve watched the show, such as the Nazi paraphernalia callbacks to S4E1.

Also, as with the previous episode, S4E5 has some absolutely entrancing sequences of animation, almost the point where their cinematic qualities alone qualify them as action scenes. Rick and Morty gets classed with The Simpsons, South Park, and Bojack Horseman, but none of them have ever done animation as dynamic as what Rick and Morty has done for each of the past four episodes. Cartoons are a visual medium, and Rick and Morty is a show that’s consistently highly visually developed and highly visually interesting. It takes its medium seriously. 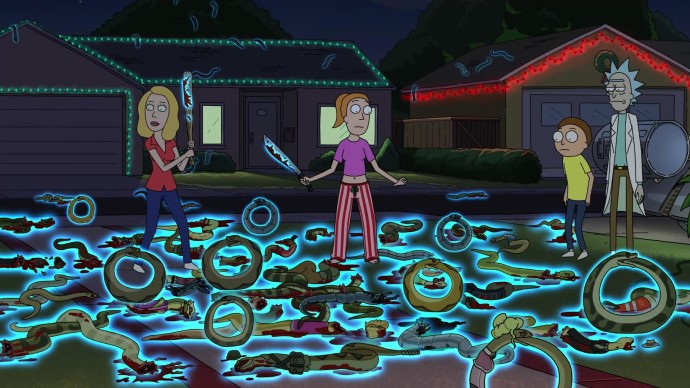 So gang, it’s time we face facts. This episode had innovative storytelling, worthwhile character development, cultural commentary in multiple different genres, highly visual sequences that take the screen medium seriously, and also hysterical zingers at every turn. What we just watched authoritatively executed every single dimension of a feature film. We watched a cartoon that had the breadth of a movie. That is worthy of substantial and lasting applause. Rick and Morty pulled off yet another mid-season finale that is truly a thrilling send-off, leaving aside the infuriating five-episode season.

P.S. It would have been cool if they made this episode’s Hitler the talking cat. That would bring it all full circle.