‘My Mom, Greg’s Mom, and Josh’s Sweet Dance Moves’ is the first holiday episode of Crazy Ex-Girlfriend. It stands out to me because it highlights the roots of a lot of Rebecca’s problems. We have all seen it countless times, when anyone on television (even in real life) addresses their issues, usually in therapy, it comes down to their mothers. This episode is the first time Rebecca’s mother comes to visit, so we get to experience their relationship first hand.

Let’s talk about the first song of the episode. ‘Where’s the bathroom?’ highlights Naomi as an intrusive, protective, and rather rude mother. It’s also made clear that these characteristics tend to be typical of Jewish mothers. I don’t know a whole lot about this, but these characteristics in Naomi definitely have pressured Rebecca into depression and turned her into a level five mom pleaser. 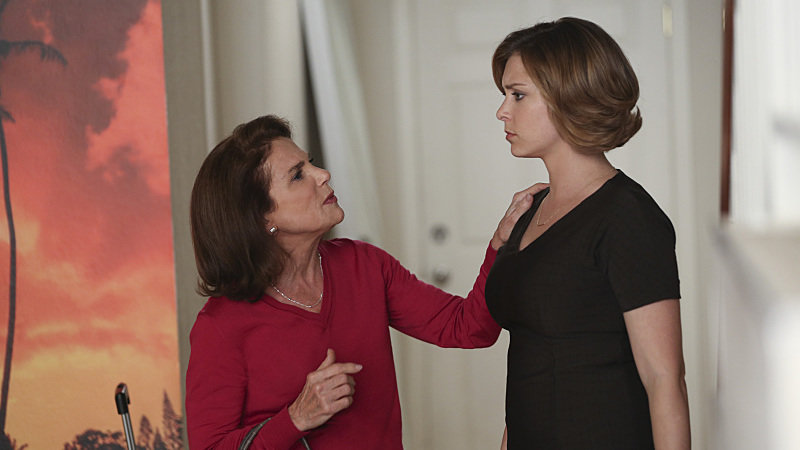 Through the lyrics, we realise that Naomi is a woman who values material things. She criticises Rebecca’s appearance for her weight and eczema, and she criticises her home for its lack of vases and bathroom decor. Of course, we know that these songs are Rebecca’s way of expressing her opinions of someone, or a situation in her mind. So whatever her mother says, she sees it as herself being put down and her mother being overbearing. Her mother sings fast and loudly, and she doesn’t give Rebecca any time so respond, so Rebecca is clearly feeling overwhelmed with her mother visiting in the first place. The fact that she barges in with an obnoxious song makes it clear how much of an intrusion she is on Rebecca’s life in West Covina.

There is actually a theme of mother issues in this episode. As the title suggests, we also meet Greg’s mom. While Rebecca tries to justify her mom’s behaviour, Greg views his mother as condescending, while she is actually really caring. Their issues are almost the opposite of each other. I don’t think it was intended this way, but maybe these scenarios put a contrast between Rebecca and Greg so that it would feel smoother to see Greg get together with Heather in this episode. I can see how it would work, but for me, I still didn’t like to see it. I have always been on Team Greg, especially in this Season 1. So I find myself waiting for Greg and Heather to be over from the moment they kiss in the town. To be honest, I get the feeling Greg is waiting for the same thing. He never really gets over Rebecca throughout this whole relationship.

Alongside the theme of mothers, Josh Chan is having his own journey in this holiday episode. He meets some kids from the school he used to go to, who admire him for creating the dance routine they are still using to perform at the mall. He realises that being an adult isn’t a whole lot of fun, so reverts back to his childhood ways for a moment. Josh has his mother call in sick to work for him, and then he ends up performing with the dance group on stage. Josh has always been quite childish, but in this episode, it wasn’t particularly in a harmful manner. It was simply him embracing the fun of childhood. Perhaps he has this fun adventure here because it is Christmas time, and we all embrace our inner children around this time of year, don’t we?

Towards the end of the episode is when we really start to feel the festivities. Greg’s mother has a heart to heart with him and tells him she really is proud of him, and he realises that he has been acting like kind of an ass when there has been no need for his behaviour. He leaves with a closer relationship with her and even buys her a present. It’s a candle, but it’s a good start. And, well, after a disagreement with Naomi, Rebecca gives in and confesses that she was portraying her life in a fake way to please her, but she doesn’t care anymore. This particular moment is one of those personal growth kernels that Rachel Bloom feeds us when it comes to Rebecca’s character, and I’ll take it! It ends up well for them both because when Rebecca stands up to her mother in that way, she blurts out that she thinks she hates her. Her mother doesn’t hate her, and I guess it’s the case with most mothers—they may appear overly possessive or condescending, and even when they are, it’s usually (in some crazy way) in your best interest.

Looking over the episode, perhaps the show wanted to give us examples of how at Christmas time you will likely fight with the family you are being forced to spend time with, but in the end, you love each other, and it can be resolved through communication. The second and final song of the episode is one of my favourites. ‘California Christmas Time’ has become the song I wake up to every Christmas day, and while the lyrics don’t really relate to the topics addressed in this episode, it’s a cheery, humorous Christmas song. The characters we love get up on stage and dance and sing and it’s a joyous song that really lets you know you’re watching a holiday special.

I think every episode of Crazy Ex-Girlfriend stands out, but right now, as it’s around Christmas time, I wanted to look into this one with you. May it make you think about your own relationships during this holiday season.