Welcome one, welcome all to the first-ever Weekly Music Spotlight. Each Tuesday I’ll be taking a band or artist that I love and taking a closer look at them. I’ll give you a brief history of the participants involved and then list five tracks or albums that I believe are the best jumping-off points for those among you who’ve never heard of them.

Hopefully, this will give you the chance to discover bands and artists that you may never have known existed and in doing so, it might just give some much-deserved love to people who’ve been the soundtrack of my life.

First up is a man who has been such a heavy influence on me that I couldn’t have started anywhere else.

Ladies and Gentlemen, I present to you, GIL SCOTT HERON.

Who Is Gil Scott Heron?

It’s almost impossible to describe Gil Scott Heron to anyone as he was a lot of different things to a lot of people.

Born on April 1st, 1949, to an opera singer mother and a professional footballer father, his life would be sent into turmoil when his parents split up and he was sent to live with his grandmother Lillie. He adored his grandma and when she died when he was twelve, he was devastated.

Moving back in with his mother, his natural talent at writing would earn him a scholarship to Fieldston School but it was here that he’d find himself the subject of racism on a regular basis.

These trials would help mold him into the man he would eventually become, but his music career didn’t really begin until he started to attend Lincoln University, where he met Brian Jackson.

Jackson would become the main musical driving force behind his early work. In fact, there is a case to be made that if this meeting had never happened Heron would’ve followed his original dream to become an author.

Thankfully, he decided to give music a try and in 1970 entered the studio for the first time to record Small Talk at 125th and Lenox and the rest, as they say, is history.

Pieces Of A Man: Full Album

Most musicians/bands/artists spend their whole career’s trying to release that perfect record but very few manage it. Usually, even the best album’s have that one filler track on it that you can either take or leave. Yet Gil Scott Heron managed it in just his second attempt.

Pieces Of A Man was the first-ever time I ever heard Gil Scott Heron and it was the perfect place to start.

There isn’t one bad track on the entire thing. Every single one is perfectly written and crafted from both a musical and lyrical standpoint, but amid all this amazing work, two tracks somehow stand head and shoulders above the rest.

The title track is a work of art where he takes the role of a young boy reflecting on his father losing his job in a mass layoff.

His father falls apart at this news and it culminates in him being arrested and dragged off to jail. The fact that the whole story is told to the sound of some of the smoothest jazz you’ll ever hear makes it even more haunting.

It’s truly heart-breaking, as you can feel his shame at losing his job pour out from the speakers as Gil Scott Heron closes the song with;

For personal reasons though, my favorite track is “Home Is Where the Hatred Is”.

A junkie walking through the twilight
I’m on my way home
I left three days ago, but no one seems to know I’m gone
Home is where the hatred is
Home is filled with pain and it,
Might not be such a bad idea if I never, never went home again”

Over the years I’ve battled with various demons and there was a time in my life where that first verse summed me up to a tee. It wasn’t until I heard GIL SCOTT HERON sing about the subject that I thought it possible that someone else could ever know the kind of Hell I was going through each and every day.

But Gil knew and Gil understood, better than most.

In fact, when I finally sorted myself out it would be that song that I would go to whenever I felt the need to visit an old friend, to remind me just how far I’d come from the living wreck I once was.

In my opinion, there has never been a song written before or since that encapsulates the horror of drug addiction so perfectly as “Home Is Where The Hatred Is”. All three verses show just what the addict’s mind goes through and how we’re just wired differently to other people.

If it hadn’t been for this song I’m not sure that I could’ve made it out the other side, let alone have stayed as clean as I have over the years. For that, I will be eternally grateful but sadly, the same couldn’t be said for the man himself and his addictions would follow him throughout his life. 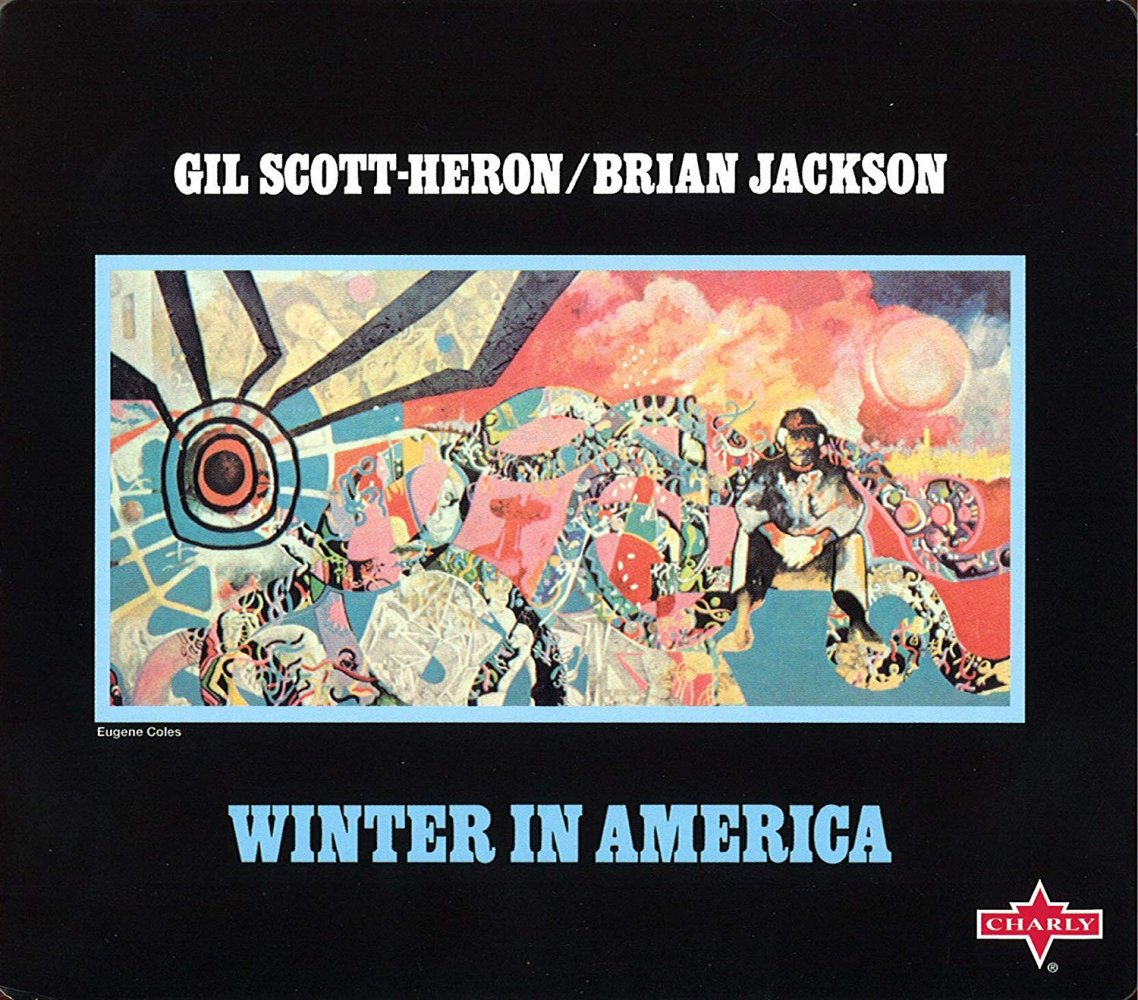 The song “Winter in America” from the album of the same name is just a relevant now as it was when it was released some 46 years ago.

In it, Gil Scott Heron casts his eye over the state of the country that he both loved and hated at the same time while Brian Jackson weaves a tapestry of sound that soothes the harsh truth that is hidden in the words.

The imagery he uses throughout the song paints a picture of a place that he sees as dying with nobody left to save it, as progress buries everything under tarmac, as racists are still allowed the power, the vulture’s circle overhead, ready to pick the bones clean.

And if that doesn’t sum up the state of the planet these days, then nothing does.

Something a little more uplifting now—well, at least from a musical standpoint.

“The Bottle” seems, at first glance, to be a simple get up and shake your groove thang, yeah! kind of tune and if that’s what you want to do to it, then who am I to argue? But as it’s Gil Scott Heron, it’s never that simple.

What the song is actually about is how alcohol can ruin lives;

For four and a half minutes he tells the stories of various people, a once fine-looking sister, a doctor who lost his nerve, and shows how what happens to them as they descend deeper into the bottle.

And just to prove he had an incredible sense of self, the last verse is dedicated to his own battle with the booze.

If you ever come lookin’ for me
You know where I’m bound to be,
In the bottle
Turn around
Look around on any corner
If you see some brother lookin’ like a goner
It’s gonna be me”

It might be a dark subject matter but I’ll be damned if you can’t dance to it.

Me And The Devil

Taken from his 13th studio album, “Me And The Devil” is the best version of this song ever committed to vinyl.

A cover version of the Robert Johnson classic, the new stance that Gil Scott Heron and Richard Russell took here, not just to this track but the whole album, would see GIL find a new generation of fans.

The record has been called post-industrial blues and if you have to stick a label on it, then that one’s as good as any.

Personally, I call it genius.

The title track from his final album, I’m New Here released in 2010, would become the epitaph that a lot of fans would remember Gil Scott Heron by.

It looked for all intents and purposes that he’d finally gotten his life back on track after years, seemingly, in the musical wilderness. It had been around 16 years since his last studio release, and this new record seemed to be about to launch him back into the public consciousness.

Sure, he’d still performed live but this was going to be the one that gave his career the lift that it so drastically needed.

After returning from a European Tour, Gil Scott Heron fell ill and died in St. Lukes Hospital in New York City on May 27th, 2011.

I’m not ashamed to admit that when I heard the news I cried like a newborn baby. It just didn’t seem fair.

Here was a man who had spent his entire life battling against his own demons, before disappearing into the musical wilderness and then rising again like Lazarus with a new record that would surely put him back on top, where he belonged.

Yet, this was all taken away on that afternoon.

Gil Scott Heron means more to me on a personal level than a lot of artists and bands that I’ll cover here each week but that’s down to the way my life panned out more than anything.

I understand addiction; I understand what it’s like being so poor that you never know where your next meal’s coming from, but I could never express it with such eloquence and grace as he did.

Every one of his songs is a journey through the eyes of someone else, whether they’re an addict, a child, a proud father, or someone just telling their sad little story, Gil Scott Heron gave a voice to the people that nobody else seemed to care about.

He was called The Godfather of Rap, a monicker he himself wasn’t fond of, and I can see why but to me he’ll always be the bluesologist who made you pay attention to those around you you normally wouldn’t give the time of day.

And when all is said and done, that was probably his greatest gift of all.