Episode 3 of The Outsider served as a proper beginning to the story in some senses. The first two episodes laid the groundwork, created an atmosphere and a mood and completely threw us for a loop with the death of Jason Bateman’s character, Terry Maitland, in the opening minutes of Episode 2. Episode 3 let us recover from that shock a bit and begin laying the pieces out for what will be the story to come.

The episode picked up where the previous left off, with the state police in the barn, discovering Terry’s discarded clothes, the same clothes we had seen him wearing in the surveillance video before. As the police were examining the clothes, a sock snapped in half, in what served as further proof that something very weird indeed is going on in this case. Later in the episode, Ralph was getting caught up to speed by Detective Sablo, who informs Ralph that on the belt buckle they found, which Terry was clearly wearing in the video, there are two sets of prints. One belongs to Terry and the other is faint and brittle, appearing to be the prints of an 80- to 90-year-old Terry. There was also a mysterious substance they assumed to be semen but was actually something that none of the lab techs could identify.

The supernatural occurrences continued throughout the episode, in multiple story lines. Jack, the world’s friendliest police officer, was shown in the beginning of the episode throwing a minor temper tantrum at the police station after finding out that he had to drive an hour to meet the state police at the barn where Terry’s clothes were found. In a fine use of taxpayer dollars, Jack stops at the strip club we’re quickly becoming acquainted with on his drive out to the barn, for a beer and to insult the dancers. Something about how he called one of the dancers an “oxy-head” made me think that he probably doesn’t have a lot of friends.

When Jack eventually makes it to the barn, one of The Outsider‘s strengths really came into play. This series has an amazing ability to create a mood through lighting, sound effects and score. The scares aren’t cheap, they’re genuine. Watching Jack in the dark following the sounds with his flashlight in hand came off as truly creepy, accented by the sounds of strings and a saxophone, a completely original sound for this type of show. Jack is eventually stopped by an entity that we can’t see, but he’s paralyzed by it. Later we would see that his neck has broken out in this terrible looking rash and he’s both physically and mentally impacted by this. In the closing moments of the episode we would see Jack yelling in his apartment that he would do whatever it wanted him to do. What this is and how it relates to Terry Maitland and the murder of the boy is uncertain at this point but it feels like the first breadcrumb being dropped.

The late Terry’s Maitland’s family has obviously been tremendously impacted by his arrest and subsequent murder. The girls are expelled from school with the principal citing the situation as a distraction for all. Later in the episode, Jessa, the younger of the two girls, wakes her mother up by staring at her while she sleeps from the foot of the bed. Jessa tells her mother she has a message for Ralph from the creepy man that’s been visiting her. When Jessa finally does get to speak to Ralph (and his wife) later in the episode, she tells the Andersons that she’s been visited three times by this creepy man. The first time, he looked like her daddy. The second time he looked like “someone had tried to erase him” but no longer like her father and the third time, “inky.” The only other things she was willing to say was that this man makes her mad, not scared, but that Ralph should be scared.

Episode 3 introduced us to Holly Gibney (Cynthia Erivo) and the characters in jail. Holly Gibney comes recommended by Howie and Alec, who make a joke about her needing to land her spaceship before she can take the case. The first time we see Holly, she’s saying to herself out loud from her hotel window, the make and model of each car that passes by. It’s not easy to describe Holly but her abilities can speak for themselves. She claims to know the lyrics to every rock ‘n’ roll song since the 1950s without even liking music, can look at a building and within seconds tell you how tall it is within 6 inches, recites stats from a random baseball game in 1985 and…well you get the picture. With the way her mind works, Holly is going to be the perfect investigator for a case like this, even if her sensibilities will clash with the closed-off Ralph Anderson.

Holly goes to Dayton, Ohio, to the nursing home where Terry’s father resides. She’s unable to see him but does gather valuable information from the front desk clerk. The clerk didn’t know that Terry was dead but mentions that two months ago, the police had tried to interrogate the elder Mr. Maitland unsuccessfully due to his deteriorating mental condition. What incident had caused the police to want to interrogate him prior to Terry’s death is yet another question we are left asking ourselves.

Later, while trying to research this, Holly finds a headline about a hospital worker being arrested for the murder of two young sisters. As it turns out, this man who was arrested for the murders, is someone we’ve been seeing in jail throughout the episode, making a shank and waiting, as if he knows violence is coming his way. He’s delivered a letter that calls him a child killer and we start to see where this is going. When the attack finally comes, he tells the attempted attacker, “You don’t get to do this” and cuts his own throat. What this has to do with the larger story is really anyone’s guess at this point but it was a haunting, violent, impactful scene that viewers are bound to remember.

Ralph’s therapy continued this week and we got more insight into his pain. While not opening up to his doctor, we saw a flashback play out in his mind from right after his son passed. Ralph was drinking heavily and wanted to use his fists to get his pent-up feelings out, doling out abuse physically in a drunken misguided attempt to release his emotional pain. Ralph’s grief likely never went away from losing his son, but this Terry Maitland case has brought it front and center again. Not only the child’s death, his entire family imploding after but now also Terry’s death, with Ralph regretting his forceful approach to Terry’s arrest has him deconstructing from the inside. One can’t help but wonder if Ralph’s grief is what’s making him a target of this supernatural entity?

Let’s do a little check-in here and revisit all of the clues we’ve collected so far. Terry Maitland appeared to be in two places at once. Terry’s fingerprints and what seems to be a much older version of himself’s finger prints appeared on his belt buckle. Officer Jack seems to have been taken over by an invisible entity that left a rash on his neck. Finally, Terry’s daughter has been visited by a creepy man three times and each time he’s looked different. This creepy man only seems to care about Ralph. We don’t know if there’s a connection between the man who killed himself in jail or not but he was arrested for the murder of children, similar to Terry. That can’t be a coincidence, right? We’re still very early into this series but it’s giving us at-home detectives a lot to think about, along with some chilling scares and really well-layered, intriguing characters to go on this journey with. Can’t wait to see where it takes us.

More From: The Outsider 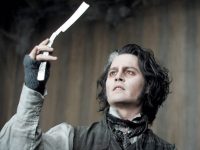