You can look up to the stars. Their heavenly bodies present undiscovered infinity all around us. You can also look up to people. If the gaze is met by a caring person, you will find a different kind of infinity. Go ahead and look to both. Such is the infectious moxie and bountiful courage zipping through the filthy accouterments and unkempt hair of the motley mess of girls that comprise Troop Zero.

To rightly thumb its nose at the historically warped expectations of young ladies, Troop Zero may not be high-minded cinema. What it is, however, is high-hearted entertainment. That calls for trite covered in treat. Put this movie in front of any girl, hell, any kid period, that’s been demeaned about their differences or forced to conform to supposed societal standards. Let them watch this movie, smile, and stitch their own sash or freak flag to be proud of.

Continuously emerging small screen and big screen starlet Mckenna Grace is Christmas Flint, a redneck rascal of a girl from her unkempt platinum locks to her sloshing rubber boats of choice. She is the sprightly star-gazing daughter of her widower father Ramsey (comedian Jim Gaffigan). He is an unlucky and toothbrush-gnashing lawyer with one employee, his tough secretary and long-pining law student Miss Rayleen (Oscar winner and producer Viola Davis), and one regular ne’er-do-well buddy and client Dwayne (Mike Epps). The lot of them live in the dingy decadence of a trailer park in the rural speck of Wiggly, Georgia in the summer of 1977.

Someone who does not grow up in mainstream finery or sparkling sophistication is not doomed to mediocrity. Their uniqueness forges their own path and personality. Christmas can be anyone she wants, not because of crystalline cultivation, but from the loving support of her surrounding family and friends. The caring values of one’s upbringing exceed the socioeconomic class of it.

With crafty creations and library-fed ideas, Christmas has a loving home complete with a rooftop deck for watching meteorites, signaling aliens, and reflecting on memories of her dear mother. Her monologue voiceovers express a mindfulness to match her bravery. Unfortunately, Christmas is seen by her peers as excluded weirdo trash who likes dirt and science instead of dolls and shoes.

The teasing Christmas receives is unrelenting at times, proof that there was too much in that era just as there is now as well. The lead verbal bullying attackers are the local troupe of hoity-toity Birdie Scouts overseen by the local school principal Miss Massey (Oscar winner Allison Janney).  Christmas absorbs that dissonance with pluck, but words hurt. The more wrong ones cut deeper than others can see until a breaking point.

Christmas’s draw towards astronomy peaks when it is announced that local youths will have the chance to record their voice on NASA’s famed “Golden Record” that will be going into space with Voyager 1 and 2. All they have to do is win a state-level Birdie Scout “Jamboree” talent show, the vacuous culmination of prescribed lady-like expectations. To compete against Miss Massey’s faction of fakery, Christmas seeks out fellow outcasts in the form of her sensitive BFF Joseph (Charlie Shotwell of Captain Fantastic), the barbarically bossy Hell No (Milan Ray), the gassy glutton Smash (Johanna Colon), and the pious pushover Anne-Claire (Bella Higginbottom) to form a squad.  Miss Rayleen, with one-upmanship and cigarette drags targeted towards Miss Massey, is coaxed to lead this rumpled rabble. 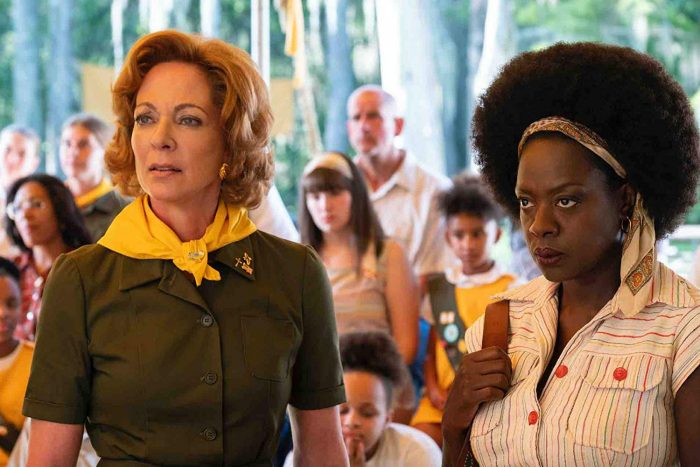 Take that aforementioned uniqueness and promote it. Don’t stifle it solely because it’s different. Don’t shame it because it’s not what others expect. Let them strut their stuff and be themselves, no matter their gender, caste, or interests. If they want to crank up David Bowie and gyrate through imagined galaxies instead of step to safe showtunes, let them. If they “funna” want to kick ass in their own endeavors, let them kick ass. If they make friends while doing so, even better. If they are happy and creative, let kids be kids. This film conveys that message wonderfully.

The wellspring of the fun in Troop Zero comes from watching this mob bond and carry on.  Viola Davis and Allison Janney are automatic impressive presences. For a tidy indie here, they soften nicely from their recent dramatic trajectories to become young again themselves while acting as the “I don’t play” adults. Jim Gaffigan is always good for affable laughs, scruff or no scruff (the former in this one).

The adults are game and wonderful, but the tweens are the magnets. As the lead, this is Mckenna Grace’s largest work to date and it adds to her future capability. Grace is a carrot of enticing endearment in nearly every role she’s had and the youthful ensemble around her, complete with three newcomers (Ray, Colon, and Higginbottom), multiply that power.

It is from all this wondrous spirit that Troop Zero exudes its strength and worthy purposes pointed towards courage, identity, and resilience. Beasts of the Southern Wild writer Lucy Alibar trades isolation vitality for group dynamics and hearty humor. What cliches exist are spun with pleasing gumption. Directed by Katie Ellwood and Amber Templemore-Finlayson (known as the team of Bert & Bertie), this isn’t a girly Goonies of contagious uncouth behavior. Rather, unity is the prize over riches. Confidence is the invaluable magic, a power still sorely needed in the parallel present. The film, and its score from Rob Lord, shine that brightness into its settings and morals in hopes that some of that luminosity can carry across the screen to the viewer. Catch the shimmer of these stars and enjoy yourself.