The Sinner, USA’s anthologized answer to HBO’s True Detective, returned this week for its third season, bringing back familiar faces and familiar themes but with a few new additions. Detective Harry Ambrose (Bill Pullman) is once again on the case, this time called to a seemingly-routine fatal car accident that turns out to have secrets buried underneath its debris.

The new season is closely following the former seasons’ format with a lead character who, although they may seem normal and uninteresting on the surface, ends up being capable of extraordinary things. For this year, The Sinner casts Matt Bomer as its leading man Jamie Burns—a history teacher at an all-girls school and expectant father whose life is flipped like the car in our crime scene when an old college friend (or foe?), Nick Haas (the always-enigmatic Chris Messina), turns up at his doorstep. Bomer is a wonderful addition to the show, with his perfectly tousled hair and warm eyes making it hard for the audience to decide whether or not we want to trust him. 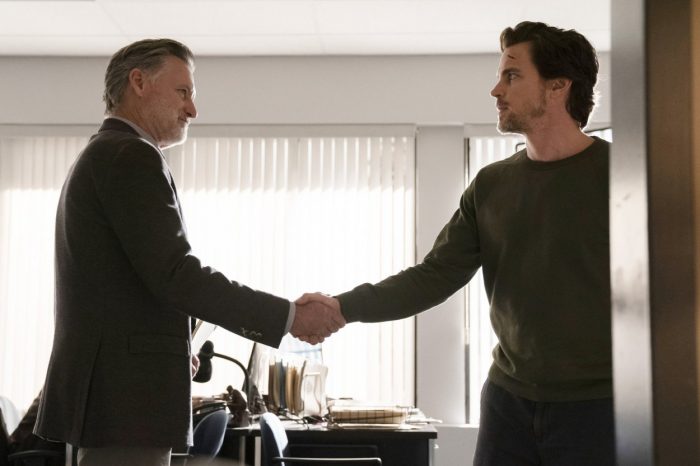 Unlike its past two seasons, the show’s premiere this time around is much more subdued and focuses more on burgeoning psychological damage than bombastic scenes of murder. The human psyche’s reaction to trauma, grief and guilt has always been central to The Sinner and, although I am a fan of the show, it has veered into trauma-porn territory before in its past seasons, turning serious topics like incest and child abuse into garish spectacles meant to be picked apart and pieced together by the viewer and Detective Ambrose alike. Of course, The Sinner is not the only television show to use trauma as entertainment—the genre of crime thrillers has practically bled this trope dry, with no experience being off-limits for creators who want viewers to sink their teeth in and be shocked by each week’s gruesome, unbearable mysteries as they watch them unfold.

This is why the premiere of The Sinner shocked me and left me pleasantly surprised, and intrigued, with its new story. Jamie Burns is not the type of lead character that fans of the show are used to seeing. Jamie is not a murderer, at least not in the over-the-top way that Cora Tannetti (Jessica Beal) and Julian Walker (Elisha Henig) were in past seasons. He is, like our past leads, extremely troubled right from the first frame in which we meet him, where he sits in a school bathroom stall getting high before teaching a class. Seemingly well put-together and well-liked, Jamie harbors a darkness within him, but a darkness that manifests in self-destruction rather than overt violence. We do not yet know whether this darkness is long-lived or recently brought on by a ghost from his past, but we do know that it is there and is only exacerbated by the tragic events the befall him throughout the episode.

What sets Jamie apart even more from past characters is that he and his actions are completely relatable. I know there are people out there who can relate to the traumas Cora and Julian went through during their respective seasons, but for the general audience member, the traumas were extreme and (luckily) wholly outside what many of us have experienced in our own lives. With Jamie’s storyline, however, I found myself wondering if I would have done the same if I was in his situation.

We all have skeletons in our closet, secrets we’ve buried so deep that even those who are closest to us have no idea what we’re hiding. And many of us live with the fear and anxiety these secrets cause, fear and anxiety that, every once and awhile, creeps into our everyday normal lives and threatens to tear apart the fabric of the reality we’ve worked so hard to build. Whether it is participating in a shameful act, a relationship with a bad person, or an embarrassing experience from the past, I’d be hard pressed to find someone who isn’t hiding something, someone who hasn’t asked themselves, “how far would I go to keep my secret?” In the Season 3 premiere of The Sinner, we see how far Jamie would go to keep his as he makes a simple choice that lays the groundwork for the rest of the season.

The central mystery this season isn’t why Jamie made the choice he did but what consequences will befall this choice and how dark is the secret that he wants to keep. There are many other questions embroiled into this mystery, like why did Nick come to Dorchester, what were the two of them doing in the car, and who the hell is Sonya Barzel (Jessica Hecht)  and how does she play into all of this. I’m really hoping The Sinner continues this nuanced, quieter approach to the subject matter it loves so much throughout the rest of the season and, if it does, it should pan out to be the best season yet. I’m looking forward to learning more about our new cast of characters and to see just how Detective Ambrose unravels these threads.

The Sinner airs Thursdays at 9pm on USA.