“Only the good die young,” as the song goes. Over the years there have been a number of TV shows that have made an impact on us here at 25YL and that we have been sad to see struck down in their primes. A season or two that grabbed us, and…that’s it. Whether there is some sense of completion or we are left dangling by a finger from the side of a cliff, these are shows that we think are worth remembering, revisiting, or even watching now for the first time. This week, Edwin J. Viera takes a look at NBC’s Watching Ellie.

Many shows have touted themselves as depicting a slice of life, or an in-depth look at the life of their characters. However, one show in the early 2000s took a unique, and quite literal, spin on this for every episode of its first season. Watching Ellie, which ran from 2002 to 2003, was the first show actress Julia Louis-Dreyfus starred in after her historic nine-year run on the NBC powerhouse Seinfeld. Unlike some of her more iconic roles—such as Elaine Benes, Christine Campbell (The New Adventures of Old Christine), and Selina Meyer (Veep)—Louis-Dreyfus’s role of Ellie Riggs was a more likable character put in unusual situations throughout each episode.

The show centered on Ellie, a jazz singer looking for her big break, although she regularly had singing gigs and recordings for commercials. The show was filmed in a single-camera format, which was still relatively new at the time Watching Ellie premiered but featured a unique caveat in its attempt to be a slice-of-life show: a clock. The opening credits of the show depicted a clock hand spinning forward, which would then show 22:00. This was a countdown for how long the episode would last and gave viewers the sense that the events of the episode transpired in real-time. 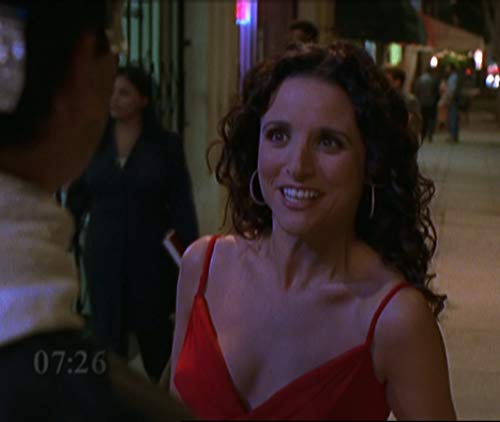 An early example of a television show episode that was done like this was the Season 2 Seinfeld episode “The Chinese Restaurant.” In the episode, Jerry, Elaine, and George were waiting for a table at a Chinese restaurant before going to see the famously terrible Ed Wood film Plan 9 from Outer Space. Though this episode was only given a figurative clock (the time the movie starts), Watching Ellie was given a literal clock to keep people apprised to where they were at in that week’s selection of Ellie’s life.

Other characters in the show were Ellie’s unhappily married boyfriend and band guitarist Ben, played by Darren Boyd; her sister Susan, played by Lauren Bowles; her terrible ex-boyfriend Edgar, played by Steve Carell; her neighbor Dr. Zimmerman, played by Don Lake; and her other slightly dimwitted neighbor Ingvar, played by Peter Stormare.

What separated Watching Ellie from episodes like “The Chinese Restaurant” is how it didn’t stay in one location. The characters moved around from place to place in the series. In the second episode, “Wedding,” Ellie was singing at her friend’s wedding, and the bride had written a special song for Ellie to sing as the couple’s first dance. However, Ellie could not find the music for the song, which was in her purse. She later realized her purse was actually in Ben’s car. Though they primarily moved around the wedding venue’s grounds, other episodes—like the fifth episode, “Cheetos”—went through numerous locations.

“Cheetos” was about Ellie trying to record a commercial for the cheese-doodle product of the same name. However, she ran into problems when Edgar, after an attempt to win her back goes awry, decided to abide by regulations that made it take longer to record the commercial. Since she entrusted her wallet to Ben, who was waiting for her at a bookstore next door, she went to retrieve it but spotted him hitting on a woman. After Ellie confronted him, he lied to her and said that the woman was his wife. Ellie was hurt by the truth in Ben’s lie and turned it into an empowering performance of a Judy Garland song chosen for the commercial.

The show was a perfect mix of comedy and minor drama to keep viewers watching week after week. However, NBC put the show on hiatus before the last three episodes of the first season could air. A year later, in 2003, the show returned with a truncated second season, only this time, Watching Ellie was remarkably different.

For one thing, the idea of the show being set in real-time was eliminated. Instead, the show adopted a more traditional sitcom format with an audience and a multi-camera format. Certain elements of the plot, such as Ben being a married man and Ellie dating him, were eliminated in the first episode of the new season as she decided they should just be friends. Edgar also moved into Ellie’s building in further attempts to try and win her back despite his machismo way of thinking about women.

While Watching Ellie was still about Ellie’s life, it became more of an ensemble cast instead of Louis-Dreyfus being the lead. However, this didn’t mean the show wasn’t watchable. Each character still brought plenty to the comedy table in Season 2. The second season began with a framing device of Ellie telling her therapist about some of the goings-on in her life, such as her being suspicious of Ben for having an appointment with someone named Carol, her using Edgar as a fake date to check up on Ben, and the ultimate decision by Ellie to just be friends with Ben.

Other episodes from the second season centered on Ellie’s struggle to launch her career as an acclaimed jazz singer, though this wasn’t really apparent in the first season. Additional episodes centered on the accidents of Ellie’s life, such as disastrous dates, rivalries with other aspiring singers, and (in the episode “TV”) crazy commercial directors.

In “TV,” Ellie was asked to film a commercial directed by Roman (played by a pre-Glee Jane Lynch), who Ellie had experienced problems with before. She thought that she was being gifted with a large screen television for her work, but she discovers later that the television was meant for Edgar and tried to return it without anyone noticing it was taken. A side plot to this episode was Dr. Zimmerman and Ben finding a “magic ball” that granted wishes if you made a shot into a hoop on Ellie’s door.

During the episode, Ellie said that after accidentally parking her car in Roman’s space, Roman put shaving cream all over her windshield and left a picture of her butt on the car as well. While the audience does laugh out loud, this story was taken directly from a behind-the-scenes incident that occurred when Louis-Dreyfus was on Seinfeld. After accidentally parking her car in Tom Arnold’s space (since Seinfeld and Roseanne were filmed at the same studio), Arnold left a nasty note on the windshield. Afterward, there was a confrontation between Arnold and Louis-Dreyfus (and some of her Seinfeld co-stars), which resulted in Arnold’s then-wife Roseanne Barr vandalizing Louis-Dreyfus’s windshield (including a picture of someone’s bare butt and a crude note written in soap).

Watching Ellie was ultimately cancelled after the second season. The final episode of the series was called “Feud” and involved Ellie, her sister, and her friends going on Family Feud as the Riggs Family. However, once their cover was blown by a makeup artist, Ellie gave away part of the prize: an all-expense-paid tropical getaway. While she may not have gotten the trip she wanted, Ellie was able to get some time alone with Ben because she gave the trip to her sister, Edgar, Ingvar, and Dr. Zimmerman. Ellie and Ben were able to rekindle their relationship, leaving the show to end on a moderately soft note.

Though Louis-Dreyfus’s performance carried the show enough to be watchable, you have to wonder what possible heights the series could have gone to if it was given a chance to grow a little more—specifically, if it kept to the format of the first season. The show also featured Steve Carell playing a similar persona to that of his most iconic role: Michael Scott on The Office.

Much like Seinfeld, the series that catapulted Julia Louis-Dreyfus to fame, Watching Ellie needed some time to figure out how to brave the new territory of its first season before the second season’s format change, which ultimately led to its cancellation.