I need to make two things clear right away: firstly, with The Invisible Man, Leigh Whannell solidifies himself as one of the most exciting voices in the horror genre, and, secondly, this review is going to get very personal, very fast.

The Invisible Man is a remake of the 1933 classic film, which is an adaptation of another classic, H. G. Wells’ novel of the same name. In his new iteration, Whannell pivots focus from Adrian Griffin (Oliver Jackson-Cohen), the Invisible Man himself, to Cecilia Kass (Elisabeth Moss), a change that turns this archetypal horror tale into a searingly-contemporary exploration of domestic violence that is still sending chills down my spine.

The film opens with Cecilia fleeing her abusive husband in the middle of the night, an escape that doesn’t feel complete until Cecilia learns, shortly after she leaves him, that Adrian has committed suicide. But Cecilia’s relief is short-lived as she soon begins to suspect that her husband, who is a scientific genius in the study of optics, has found an even more efficient way to haunt her in death than he ever did in life. The audience, privy early on to the fact that Cecilia isn’t imagining things and that her “dead” husband is, indeed, invisible, must then watch in silence as Cecilia suffers not only under the weight of Adrian’s violent oppression but also from the horror of not being believed.

There are many different types of horrors being explored throughout this film. The fear of secretly being watched, especially in our increasingly technological world, is one that is almost universal at this point. We’ve all had those moments where we swear we can feel someone’s eyes on us, feel their breath blowing hotly on the back of our necks, only to turn around and see no one is there. Whannell definitely plays with this fear, lingering on seemingly empty spaces for a bit too long as the audiences’ eyes franticly dart around the frame looking for a puff of breath or a footprint in the carpet to prove that someone is actually there. Benjamin Wallfisch’s bass-thumping score helps this fear along, dancing between classical-romantic string arrangements to techno-modern thrums that wouldn’t feel out of place in Blade Runner.

The Invisible Man is a film that will scare everyone, but for those of us who have experienced domestic violence, either as a victim or a witness, the film hits dramatically different. I truly have to applaud Whannell for taking the concept of the Invisible Man to the place that he did, to use this character to project a horror that, unfortunately, approximately five million women worldwide experience every year. From the crippling isolation and gaslighting to the anxiety-ridden paranoia that never really goes away, Whannell gets everything right — so much so that, at times, it made me feel physically ill. When I was a child, my mother lived with an abusive man who frequently got drunk and beat her. This film brought me back to that place, to the packed bag hidden away in case she ever got the chance to run, to the truly disturbing feeling of slowly suffocating in your own home, to the fact that my mother still lives her life looking over her shoulder even decades later. 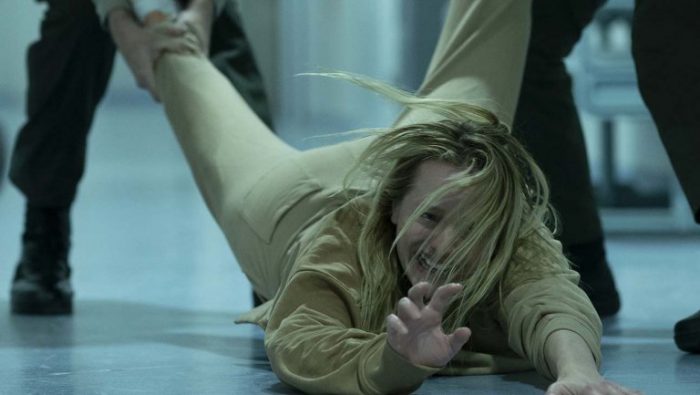 Whannell brings these feelings to the screen in a way that I have never seen before, presenting an authentic and terrifying window into the world of an abuse victim. I can’t give Whannell all of the credit, because the weight of the trauma portrayed on screen is carried brilliantly by Elisabeth Moss, who once again proves she is one of the best working actors in Hollywood. Moss’s portrayal of abuse and trauma is so authentic as we watch her ebb and flow through the ugly realities of being a victim of domestic violence. Whannell and Moss together take the story of the Invisible Man to new heights that I never imagined it could reach, weaving together a tangible horror story about technological stalking with an allegorical commentary on the inherent invisibility of domestic abuse.

Many women suffer in silence every day, with the realities of their household horrors only coming to light when those horrors, all too often, turn deadly. Just last week, Amie Harwick was strangled and thrown to her death off a third-floor balcony by her abusive ex-boyfriend. Harwick expressed fear of her ex to family, friends and even the LAPD, a fear that was not taken seriously until it was too late. And this tragic truth, so common in our modern world, is the horror that The Invisible Man brings to light above all else.

On par with the physical and mental abuse suffered by Cecilia at the hands of her husband, is the emotional pain of her friends and family turning a blind eye to her suffering. One of the earliest scenes in the film is of Cecilia telling her sister Emily (Harriet Dyer) and friend James (Aldis Hodge) about the ongoing abuse she endured as the two look on in shock and awe. This theme of disbelief, of only seeing what we want to see, carries throughout the entire film, ending with Cecilia realizing that the only person she can trust to protect her is herself.

I do have some small gripes with the film. The “twist” is something that I saw coming from a mile away and the ending still isn’t quite sitting right with me. The film seems to build to this crescendo that doesn’t quite hit its peak, with its ending feeling too cliched and neatly wrapped up when I wanted something that could be left to my interpretation.

With all that said, The Invisible Man is, without a doubt, the first great horror film of the new decade and easily my favourite film of 2020 so far. The visuals and sound design beg to be experienced in a theatre, so you don’t want to sit on this one until it comes to VOD. Between Moss’ harrowing performance and Whannell’s deft and skilled hand at telling a meaningful story without it becoming didactic, this film is one you do not want to miss.