Kidding  S2 Episodes 7 & 8 were in an unenviable position, having to follow last week‘s back to back television tour de force. I found myself genuinely curious what the follow up would be like. Episode 5 in particular is almost universally praised as being television at its finest and the episode that followed was Kidding‘s trademark blend of over the top humor mixed with twinge of heartbreak. What direction would the episodes to follow take? How would the story build? What we got were two more terrific chapters in what is shaping up to be one of television’s finest seasons of any show in recent memory.

Starting with “The Acceptance Speech,” the concept of reality was called into question. Does acceptance over a given situation define what our reality is? Or can our denial (or other underlying causes) be so strong that we’re able to exist in a reality we’ve cultivated for ourselves? How long can that reality exist? The answer the show gave was that these “alternative realities” can exist as long as we allow them to. We saw Jeff and Deirdre work to pull themselves out of the delusions they provide themselves while Seb falls deeper and deeper into a stroke induced delusion.

The episode started with Jeff being MIA on the day where the Smithsonian was set to give him a lifetime achievement award. Deirdre, being Deirdre, was trying to find him and while doing so, completely overlooked the fact that her father had a mini stroke right in front of her. Thankfully, her axe wielding daughter noticed. Seb and his granddaughter wound up at the hospital where his mind was noticeably beginning to fail him. He thought he saw his ex-wife at the hospital and by episode’s end, would be pursuing this person. Throughout the course of both episodes, we would follow Seb and discover this person that he was wining and dinning, thinking it was an elderly lady, was actually a younger gay man who was enabling this delusion and playing the part. By the end of the second episode, we would see them in an intimate encounter, Seb completely unaware that it was a young man pleasuring him and not the elderly woman he thought looked like his ex-wife.

Kidding takes situations like this and plays them both as sad and for laughs at the same time. It’s uncomfortable, seeing this old man who is suffering mentally be taken advantage of like that. It’s hard to watch yet the laughs are genuine and not rooted in any kind of stereotype. Seb hasn’t always been the most likeable character and when we see his head drop back in pleasure and a man’s hand is rubbing his face and Seb says “I can’t wait for my family to meet you,” you can’t help but uncomfortably laugh. There’s something very true to life about this feeling, laughing when you know you shouldn’t. Life is uncomfortable, often unfair and funny even when it shouldn’t be. The question now is how far will this go? What are this man’s intentions with Seb and will Seb pull out of this delusion to see what his current reality is?

Jeff and Deirdre both battled with personal delusions in the first episode, both of their own making, unlike Seb. Starting with Deidre, she bought a box of the Mr. Pickles cereal on eBay, the same cereal that we learned earlier this season came with a vibrating pickle. A flashback at the beginning of this episode showed a supermarket filled with women clearing the shelves and one child at home wondering where the toy inside his cereal was, while we hear his mother moaning from behind a closed door. Turns out Deirdre had the same idea and in one of the more absurd subplots in series history, the vibrating pickle became stuck inside of her. I’ll admit, at this point, I wasn’t really a fan of this development but the payoff was worth it. At the Smithsonian presentation, Deidre was forced to call her now ex-sister in law Jill for medical help in a restroom stall. Jill, already at wits end with this entire family, reluctantly came and the two argued the whole time she was trying to help remove the vibrating pickle. When Jill gave up and the argument turned to Deidre being the source of all of her own problems in life, something clicked in her that she was in fact making her own problems worse. We saw the lightbulb moment where almost two seasons worth of missteps flashed before her and she admitted that she was indeed constantly making her own problems worse. That realization was all she needed for her to “quit f*cking herself” both figuratively and literally, as the pickle dropped instantly.

Jeff’s time MIA was spent at a place for elderly people with memory problems. This facility was designed for these elderly people to feel and act like it was 1960 again. This deception allowed the suffering to function in a manner that was enjoyable to them, living out a period of time in their life where their failing health didn’t define them. Jeff questioned his actions and if participating in the lie was actually helpful but it did appear to be. These elderly people seemed happy and weren’t confined to your customary senior home, staring off into space or participating in scheduled group activities. It seemed like they were living, even if it were in a reality that only existed to them.

That’s when we found out the truth, the reason for Jeff being there. He had found his mother, the woman that had walked out on their family when he was a young child. Jeff sat next to her at the staged bus station, where she told him she was going to Niagara Falls, just the same as when she left the family. In a scene that was hard to watch but pivotal for Jeff’s ability to exit his own delusions, his mother told him that she didn’t care much for her children and leaving them was an easy choice. She didn’t want to be there. She was leaving without any concern for the abandonment they would feel and also, that her husband would feel. Her motivations were as simple as that’s what she wanted to do.

Kidding at its core is all about pain not dealt with and for Jeff, Deidre and Seb, this woman is at the core of their pain. Jeff began to break free here in this moment. He knows that he’s largely alone. He doesn’t have his parents, he’s newly divorced and one of his kids is dead. To move forward, he has to let go and embrace who he is. Who he is, is Mr. Pickles. 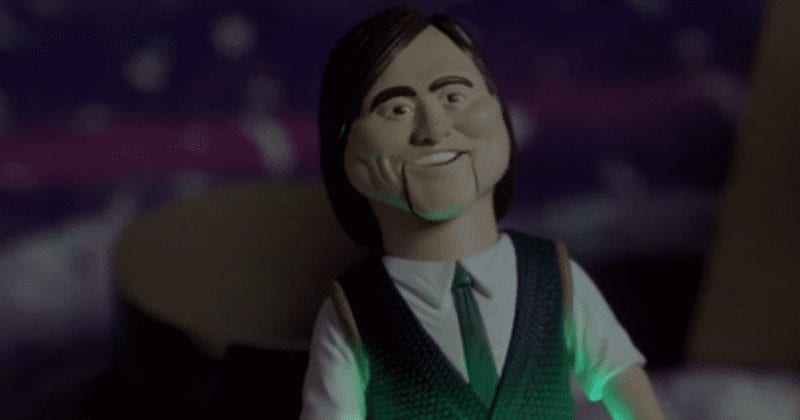 The following episode was a heartfelt origin story for Jeff and Deidre, using the Challenger explosion as the incident that changed their young adult lives. Jeff saw the pain people went through watching the explosion and wanted to make people feel better. Deidre put her dreams on hold, choosing to help Jeff start his show by making these puppets instead of going to the school in Japan she was accepted to go to. This moment in time, these decisions made in the wake of the explosion, shaped the course of their adult lives.

With both Jeff and Deirdre individually hitting a place of acceptance about their realities, we saw them begin to fight for what they believe in. For Jeff, its about cleaning up the wreckage he caused by hitting Peter with a car and hurting Jill. For Deirdre, its about fighting her now ex-husband over the puppets he took from her in the divorce proceedings, the puppets she created that have a deep personal meaning to her and also, more importantly, living for herself and not for other people.

The damage Jeff has caused by his public crisis of character is ongoing. Toyco had to shut down the dolls that gave kids the ability to communicate with him due to threats towards him. Finally, a disturbed volunteer in the Pickles organization attempted to throw a mason jar full of gasoline with a lit piece of paper at the house he believed to be Jeff’s, which in all reality, was the house where Jill, Peter and Will lived. While Jeff was able to save them without them knowing he did, the question looms large about how many more people will make attempts on his life? What kind of danger are Jeff and his loved ones in?

There’s only two more episodes left this season and it’s anyone’s guess where it goes from here. This season has been a roller-coaster of emotions and developments and I for one, have no clue what to expect this week. Throughout the first eight episodes of Season 2, Kidding has defied every expectation I’ve had for the show and you really can’t ask for more than that.