In this week’s chapter in our Super Mario series, we have finally come to what many believe to be the greatest game of all time. I am of course talking about the one and only, Super Mario Galaxy. This game is the first time that Nintendo took a real step out of their comfort zone for a console platforming Mario game. Sure, Super Mario 64 had us jumping into paintings and Super Mario Sunshine was a beautiful jaunt through a tropical getaway, but Galaxy is something totally different. For the first time, players were introduced to the endless canvass of outer space, and boy did it not disappoint.

Super Mario Galaxy was a long time coming for Nintendo. After development on 2004’s Donkey Kong: Jungle Beat had finished, Shigeru Miyamoto and his crew of developers set out to create the first truly large scale Mario game. After fishing for ideas from as far back as 2000, Nintendo felt they had a solid concept to build off of; spherical planetoids and the famous spin move. With those two tent-poles in place, the game flourished from there. Development was completed in roughly three years, with the game being released in November of 2007 for the Nintendo Wii console. Little did the world know how magical and mechanically perfect the game truly is. 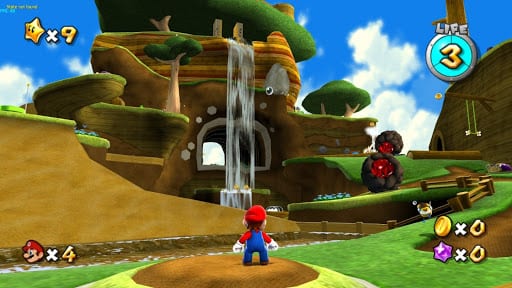 I am going to attempt to explain just what makes Super Mario Galaxy so incredible over a decade after its original release. Up until this point, Nintendo has been relatively safe with their flagship character. He has always stayed grounded, always had to save Princess Peach from Bowser through triple jumps, ground pounds and an assortment of funky tools and hats. Mario was never on its way to being stale, but it was clear that a big reinvention of the Mario series was going to happen sooner or later. After the side-scrolling adventures of yesteryear made the jump to 3-D a decade before, players knew that they should be looking forward to something new, they just did not know what.

With Galaxy, the developers really had the freedom to do whatever they wanted to in terms of level design and character mechanics. Galaxy has everything from mini planetoids, asteroids, black holes, impossible pathways and platforms, and so much more. Things that people never thought were possible in a Mario game suddenly became the norm when traditional expectations and mechanics were thrown out the window. With space being the backdrop, the possibilities were truly endless. No one has any idea what is out there, so for Mario to make a trip to the great unknown just made the perfect sense.

I touched on it before, but I want to mention it again. Super Mario Galaxy has two major facets added to it that make the game so much more than its predecessors. The use of a spin move, and the use of planetoids as a common surface. These two concepts are tied together in a way that just makes so much sense when you think about it. The use of mini to massive planetoids in the game was so perfect from the offset, except for just one or two small problems. 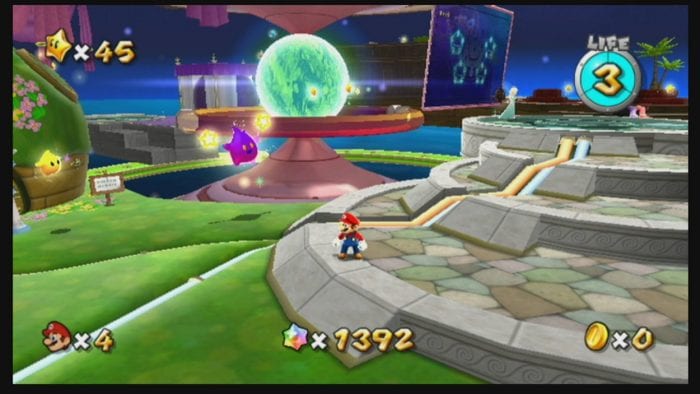 With the introduction of the planetoids, developers quickly realized that the entirely new angle and reference point that players would be playing from made it almost absurd to have jumping and stomping as the main killing mechanic for Mario. Players would now be more often looking down on Mario from above, as opposed to looking at him from behind, thanks to the inclusion of the planetoids. Because of this, developers came up with a spin move that keeps Mario on the ground, while also stunning an enemy. This way, players can see the entirety of the playing surface they are on (including the enemies), without having to sacrifice functionality or playing ability. It’s one of those things that a player would never notice unless pointed out to them, but it makes so much sense in retrospect.

Due to all of these factors I have just listed, level design in Super Mario Galaxy is some of the most inspired work I have ever seen in any video game ever, let alone a Nintendo game. There’s a reason that Galaxy is the highest-rated game on numerous websites to this day, and I think a lot of that has to do with each and every level and world that the players have Mario jump through. What Galaxy does so well is that the levels still very much feel like your run of the mill Mario levels, while still being so new and fresh, and for the life of me I don’t always know how they do it. I could go on and on about who immaculate the levels are, but I am only going to point out some of the broader aspects of a few levels, as well as a few recurring themes.

How Super Mario Galaxy is able to keep a common theme across the extremely different levels is by having them split up into subsets called Galaxies. Just to list a few examples: there’s the Honeyhive galaxy where Mario can turn into a honeybee and float around a life-size bee colony with many different planets, there’s the Sweet Sweet Galaxy, where Mario has to traverse an onslaught of live sized deserts in order to get to the finish line, and there is also the Battlerock galaxy, where Mario has to jump and dodge around a myriad of space junk and military equipment in order to find the power stars. These are only three examples of the over 40 galaxies that the player can traverse in search of power stars. 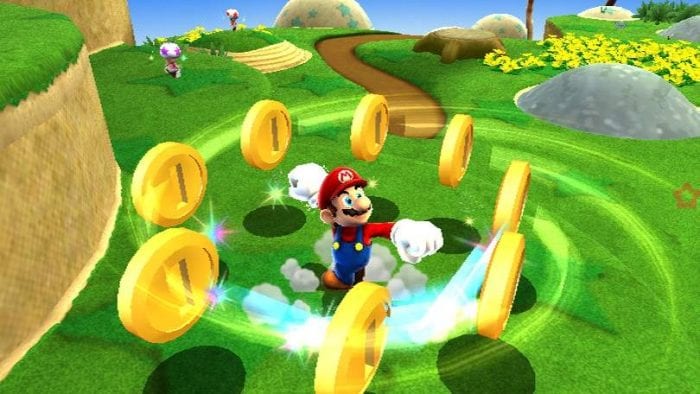 In each and every galaxy, there are a number of opportunities to get power stars, and this is how Super Mario Galaxy is able to stay true to its roots amidst all of the changes players can see. Some of the galaxies are big, sprawling areas with plenty to explore, while others are simple, one-sided puzzles that can be solved quickly while still being a ton of fun. You see reinventions of the classic slides that Super Mario is known for, there are galaxies where players need to think quickly and watch their step, and there are the ever-favorite Mario platforming specialties of just getting from one end to another, albeit with major spacey twists thrown in. Everything in the game is so new, it’s nearly impossible to see how practically each and every level is based in platforming tricks of Mario’s past. It is really a sight to behold.

As a last wonderful point, Super Mario Galaxy is the first 3-D Mario game where people could play as Luigi instead of Mario. If the player so chooses, they can try playing the game with Luigi, which can create some hilarious scenarios. Luigi jumps higher and runs faster, but he also has a bit of a stopping problem, as well as a control problem. These very light changes make the game just interesting to go through with Luigi a second time around if you get the chance. And lucky for you, you can do just that if you beat the game and collect all 120 of the power stars—good luck with that!

I could go on and on about each and every level of Super Mario Galaxy and how new and inventive they all are, but that would make this article far too long. Galaxy is quite possibly the greatest Mario game ever created, as well as one of the greatest games ever, period. I hope I have given you just enough information to be intrigued because, as always, my advice to you is to go out and give the game a try yourself. It’s clear that at this point in the Super Mario gaming timeline, Mario 3-D platforming will never be the same again. Nintendo set an extremely high bar for themselves. Good thing they cleared it with flying colors in the sequel!