There’s showing and there’s telling. A proficient documentarian leaves judgment and conclusions to the viewer. A good documentary shows. Tiger King, the latest Netflix smash, definitely shows. As the series progresses, it often shows more than any of us who are not “cool cats and kittens” are prepared to see.

We aren’t viewing the elite, the educated, or even the hygienic population of the world. This is a glimpse into Trump’s America: the land of the gun-toting, convention-smashing free, and the cacophonous bravado of the less than brave.

The motley cast of characters, each psychologically damaged and arguably broken by hard living, prowl across the screen, each marking his or her territory by extemporizing and waxing poetic about their love for big cats, their love for polygamy, their love for Walmart dumpster meat (both financial and practical), and/or their love for the lives they’ve created that allows them to experience any and all of these things. 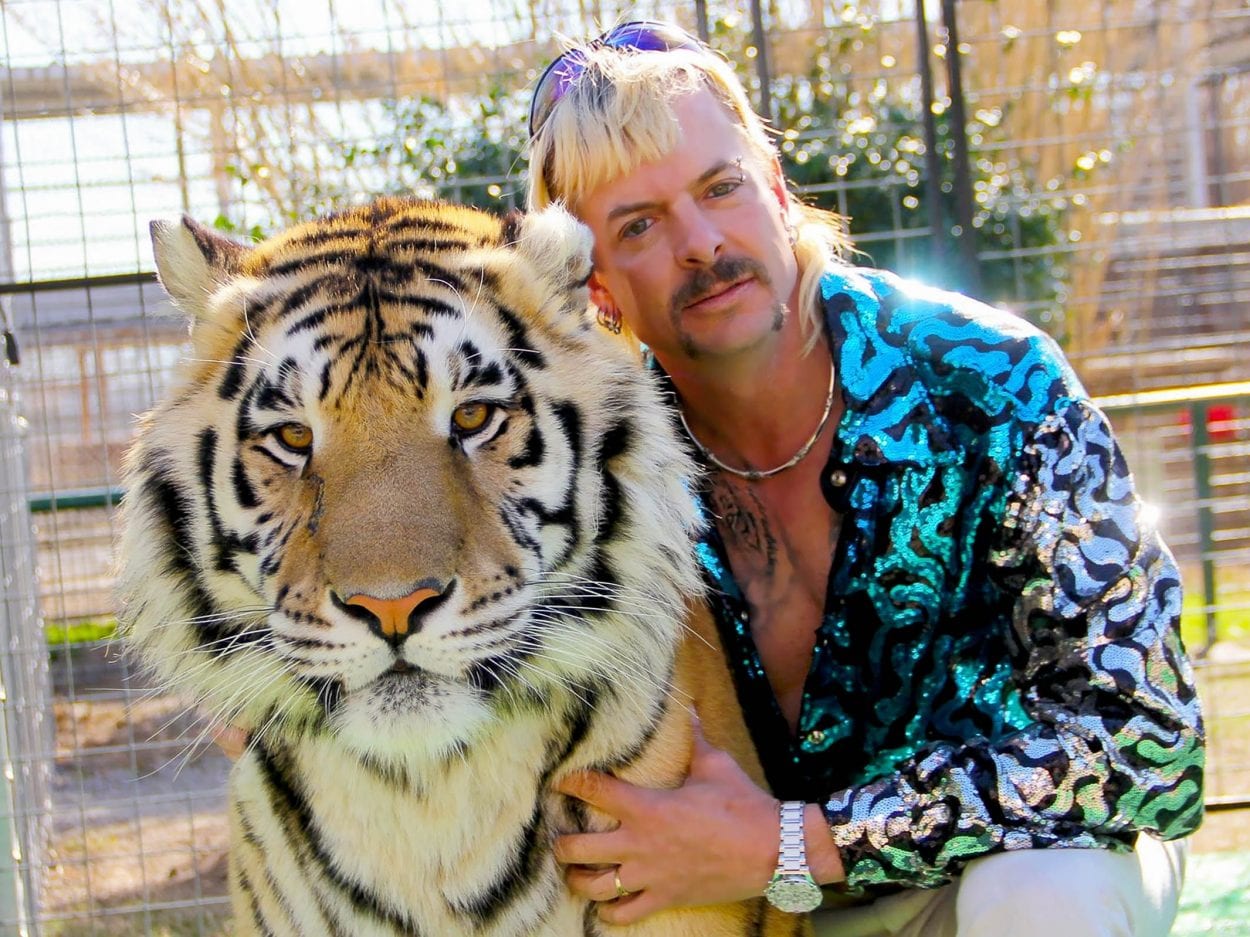 Joe Exotic (not his real name) ran an exotic animal zoo named for his dead brother. He employed people down on their luck, often after running afoul of the law. With a flamboyant wardrobe, an amazing half-blond mullet, and a brash verbal delivery, he was a consummate showman, reveling in any attention he could attract, either one-on-one or in front of a crowd. When one of his zookeepers, a transgender man who goes by “Saff,” had part of his arm ripped off, Joe’s first instinct was to don an EMT jacket and tell folks in his zoo’s gift shop that they could have a voucher that would let them come back a different day, presumably when an employee wasn’t being dismembered. Married to several men, some at the same time, Joe had a shockingly good showing during his run for governor of Oklahoma. Oh, and to round out his resume, he also Milli Vanilli’d his way to a country music album and a few music videos. His love for big cats and meth is only matched by his hatred of “animal rights people,” most notably the woman Joe calls “That Bitch”—Carole Baskin. 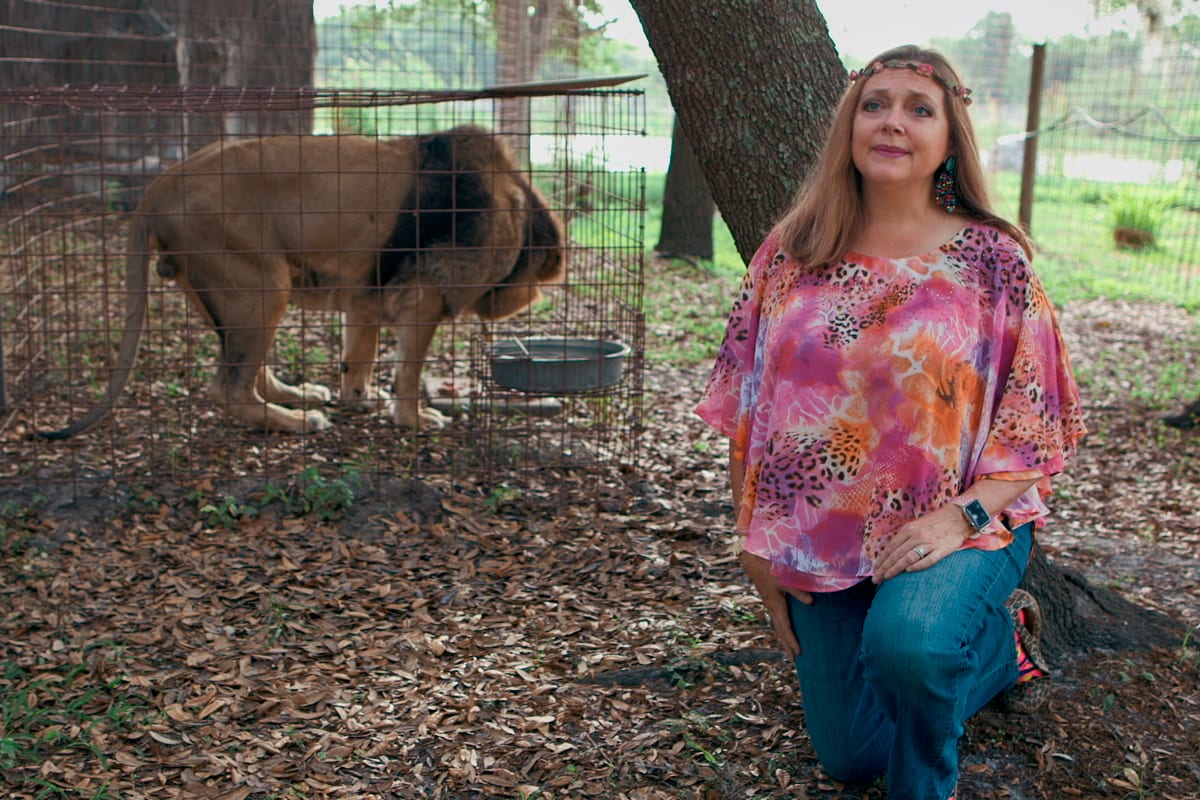 Carole Baskin runs a different kind of big cat “sanctuary,” and despite proclaiming herself an animal rights advocate, the main discernible difference between her zoo and Joe’s is that her sanctuary is in Florida. A showman herself, Baskin frequently wears wreaths of flowers in her hair, and knows exactly what to put on a human body to get tigers to devour its flesh (spoiler: sardine oil should do the trick). Without spoiling any major plot points, I’ll just say that since the documentary aired, the case of her missing-presumed-dead millionaire husband has been reopened by the law. Her current husband accompanies her during most of her screen time.

Baghavan “Doc” Antle once mentored Joe Exotic, tigerwise. He runs another big cat zoo, and shares his heart and homes with several women at a time. He shows off his estate, but doesn’t talk much about the state of his “complicated family situation.” A former member of this “pride” is more forthcoming, and describes the sex cultish nature of Doc’s compound. He also runs a “cub petting” operation, and has been accused of euthanizing tigers once their usefulness to this operation expires.

Also, an inexplicable jet-ski sequence happened, featuring a guy who insists, “It’s not about the lemur.” To be fair, it doesn’t appear to be about the lemur, but who can say for sure? 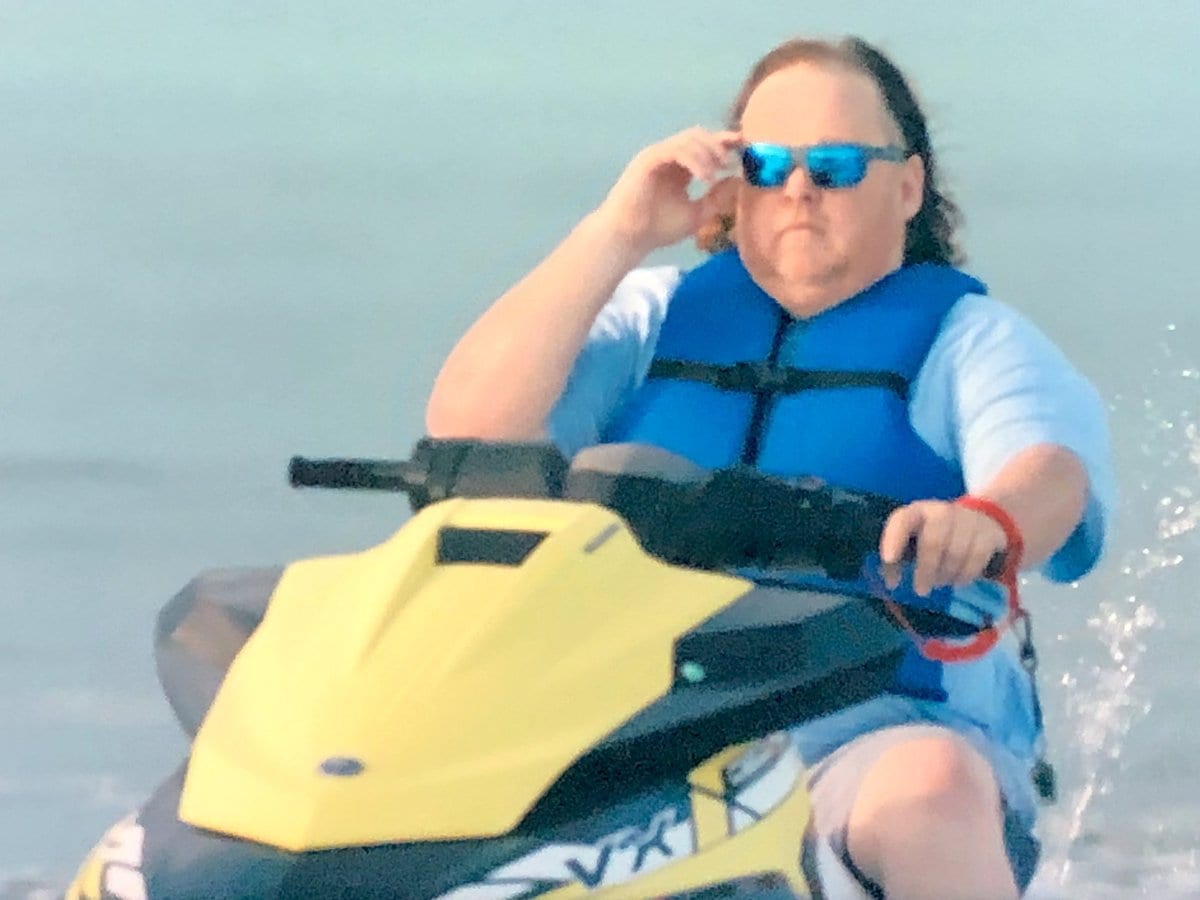 The rivalries and twists and turns and lives and deaths of these people leave many viewers’ jaws on the floor. I mean, with so much content concentrated into just a few short hours of television, where to even start with unpacking this?

Let’s start with the tigers. Throughout the show, a few numbers flash across the screen, and those numbers are displayed as the last shot of the show. An estimated 3,900 tigers remain in the wild on the entire planet. According to National Geographic, an estimated 5-10,000 tigers remain in the United States alone, with little to no regulation of breeding, housing, or use of the animals. In the wild, one male tiger requires a minimum of 60 square kilometers (about 37 square miles). Let’s just say, in the documentary, the caged tigers are often shoulder-to-shoulder. Feeding is expensive, and finances don’t always allow the so-called animal lovers to feed them all.

A good documentary shows the subjects and leaves the judgment to the viewers. In this viewer’s judgment, it’s a relief that these people’s lives appear so foreign and astounding. The crimes and petty rivalries between these people aside, the cruelty and disregard for magnificent and precious animals is beyond comprehension to me. Cruelty for the sake of vanity, for the sake of feeding one’s own salacious appetite for attention, and the filling of one’s emotional voids, is the lowest kind of humanity imaginable. Whatever traumas these people endured in their lives that led them to feel better about themselves by “owning” some of the most powerful creatures on the planet, one can only hope that this documentary helps end that legacy somehow.

Beyond the memes, beyond the jokes about hairstyles and clothing and attention-whoring, the hope is that this bizarre cavalcade of humanity and animals not only draws attention to the plight of sentient, majestic beings at the hands of humans who can’t even stop their own lives from spiraling out of control. With flash and socially aberrant behavior, including showing dominance over multiple giant land predators, these cats have proven themselves to run their shows with moral centers powered by the not-so-mighty mewling of tiny kittens.

If you’d like to help save wild tigers, there are many reputable charities out there. The World Wildlife Fund and Leonardo DiCaprio’s Save Tigers Now is a good place to start. The United States Congress has also introduced the Big Cat Safety Act to prevent and regulate ownership, cruelty to, and abuse of exotic animals. You can sign the petition to support the Act here.

A Pacific Northwest forest native and denizen, Jill appreciates the fact that others are occasionally willing to read something she's written. Dogs, radio production, and hiking occupy most of her time.