I believe that Chan-Wook Park is one of the best directors of the century so far. There are few others who have managed to produce as many consistently great films as him in the last twenty years. He’s most well known for Oldboy and it was the obvious choice when thinking about which of his films to dissect. However, many probably don’t know that it’s not only part of a trilogy, but also part of a larger, brilliant body of work. For this reason, I’ve decided to focus on Lady Vengeance instead, as it deserves much more attention than it has received thus far.

The “Vengeance Trilogy” began with Sympathy for Mr. Vengeance (2002), continued with Oldboy (2003) and was completed by Lady Vengeance (2005). All stories in the three films feature revenge for a heinous act but the first and last are more closely linked. Oldboy stands most on its own, whereas SFMV and Lady Vengeance are siblings of sorts, the latter is also titled Sympathy for Lady Vengeance in Asia as well. The first film in the trilogy was more raw, not as critically successful as the other two but liked just as much. The second and third installments are equally acclaimed but Oldboy is the favourite (for good reason, as it’s a masterpiece).

However, Lady Vengeance will always have a special place in my heart because it’s one of the first films I ventured further afield to see in my formative years as a teenager. I had seen Oldboy and was a big fan and I remember distinctly when its spiritual sequel came along. Lady Vengeance wasn’t showing in any of my local cinemas and so I had to travel into the city to find it. As with Oldboy, I was blown away by the film, I’d never seen anything quite like it on the big screen before. Lady Vengeance was part of the Tartan Asia Extreme label that also boasts films such as the excellent Battle Royale, Infernal Affairs, Hard Boiled and Tetsuo: The Iron Man. At the time, I just remember thinking that the film lives up to the title. 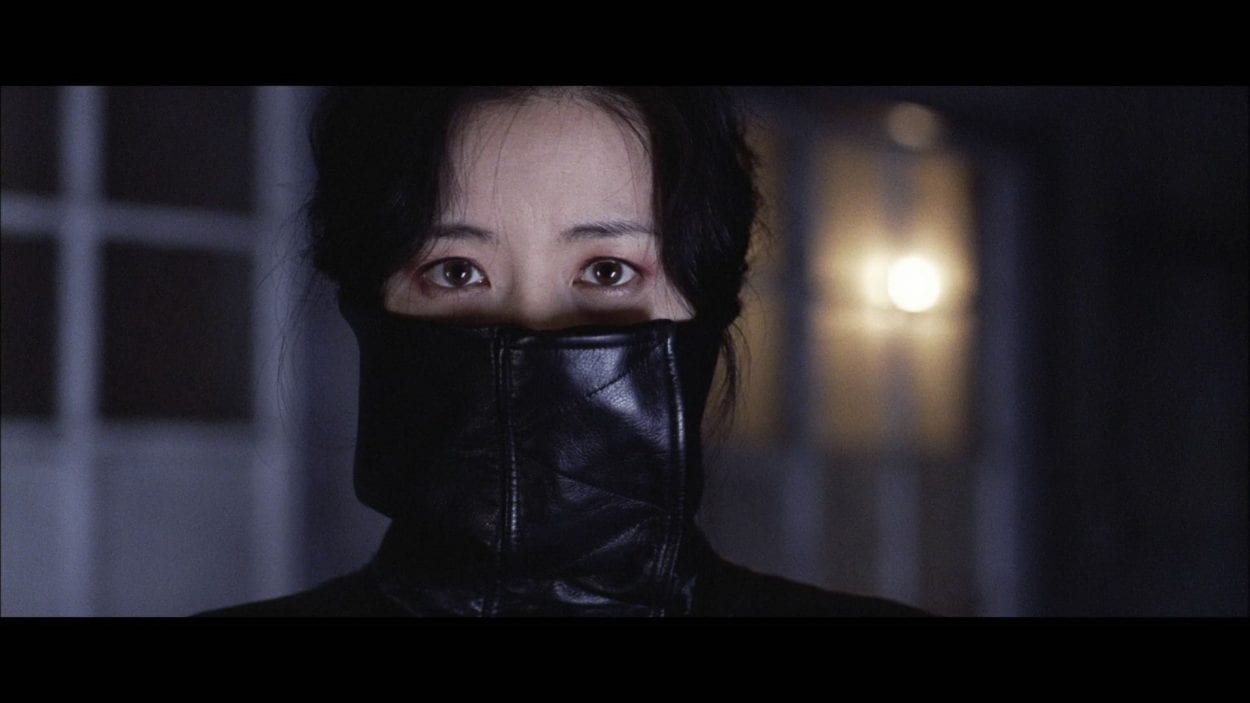 Of the three stories of revenge, the one in Lady Vengeance is the most harrowing. It’s similar to the plot of Oldboy in that both main characters are imprisoned, framed for murders they didn’t commit and taken away from their children. However, Lady Vengeance’s protagonist Geum-ja’s incarceration was a huge, heavily-publicised, national scandal. Plus, she would have turned out to be a good mother to her child as she proves over the course of the film, if not for her unfortunate circumstances, unlike Dae-su in Oldboy. This makes her tale more heart-wrenching, her loss more potent and her revenge more righteous.

Orange Is the New Black owes a great debt to Lady Vengeance, as the latter came up with the intriguing situation of women cohabiting in prison first. Everything is addressed, one minute a bully inmate is forcing another to perform a sexual act on her and then the next she’s slipping up on a floor rubbed down with soap. In writing, it sounds absurd but it not only works in the film but works well. Relationships are forged during Geum-ja’s incarceration that continue when she’s able to re-enter society and each friend is willing to do all they can to help her obtain her revenge. From providing her with the plans for the perfect gun, to manufacturing it for her.

One friend who was previously a prostitute even starts a relationship with Geum-ja’s target to gain information on him and set him up for the big fat kill. Even the detective who was in charge of her case lends a helping hand, as he never believed she was guilty in the first place. This is portrayed by Geum-ja appearing to have the shining face of an angel whilst in prison and earning a reputation because of it. Her innocence shines through despite what she’s been accused of and confessed to. This is also reflected in her particularly pale skin, offset with red eye shadow, and various snow-covered scenes throughout her story, these tropes being a tribute to the influential revenge flick Lady Snowblood.

Yet, there’s something sinister that lies beneath the surface of Geum-ja’s aura. Whilst inside she pretends to care for the aforementioned bully when she’s ill, as an opportunity to feed her bleach with her food. This causes her to suffer a very long, slow death. She also pretends to find religion whilst incarcerated, only to unceremoniously and humorously renounce it as soon as she’s out of the prison gates in favour of revenge.

Geum-ja confesses to her daughter later in the story that she was an accomplice in the kidnapping of the boy she was framed for murdering, although she didn’t kill him. The plot thickens and things weren’t as straightforward as they were before this reveal. Geum-ja accepts responsibility for her part and tries to show this by going to the boy’s parents after her release and offering to cut her fingers off in front of them as a sign of her shame. She cuts one off and they’re horrified and call an ambulance for her before she can take another.

Geum-ja also discovers that she’s a gifted pastry chef during her imprisonment, which provides her with a job when she’s finally released. Cakes are a recurring metaphor for purity throughout the narrative, accentuated by her white chef uniform and the aforementioned snow as well. Apparently it’s custom for a prisoner to eat a tofu cake upon their release, as it’s pure white and represents a clean slate. Geum-ja refuses to partake of it until the end of her arc, only once she has achieved her goal.

Park really pushes the limits with an antagonist that’s a serial child killer, played by Min-sik Choi in a role-reversal from his part of the protagonist in Oldboy. This is as bad as it sounds but he somehow manages to navigate through these troubled waters without it seeming gratuitous for the sake of shock value. Park achieves this by addressing the heavy and complex emotions that the parents have suffered through child abduction and with a jet-black sense of humour. He concocts a situation that allows them to express their feelings in what becomes a group therapy session and then take it out on the man responsible.

This all occurs in an abandoned school, with a wry sense of irony. Seeing how the parents of the numerous child victims discuss how to punish Choi and what order they get to do their part, will leave you feeling guilty about finding it so amusing. Watching them clean up and all take a photo together to document their inclusion in case of any future changes of heart, is oddly gratifying.

This dark humour is offset with some beautiful scenes such as Geum-ja producing a cake with candles and them all singing Happy Birthday to the children they no longer have in her bakery, after the dust has settled on their actions. It’s heartbreaking and one of the most brutal portrayals of loss I’ve ever seen. When they sit in silence after, one parent states the French say an angel is passing by when there’s such a break in conversation, a pleasant thought they all reflect on. 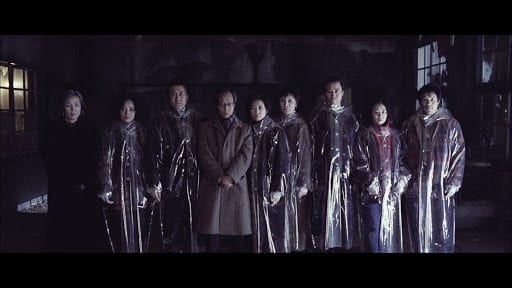 This whole set-piece is both entertaining and satisfying on many levels. It’s something that I’ve never seen in a film before, it needs to be seen to be believed and it does it with moments that are genuinely funny. This sets it apart from the other films in the Vengeance trilogy as the act of revenge is gifted by Geum-ja to other people who deserve it even more than she does. I guess it’s true that “there is more happiness in giving than there is in receiving.” Park has a great, quirky sense of humour that blends well with his severe stories. There are recurring motifs that he uses throughout such as bizarre, fantasy cutscenes.

Another is to cut to characters frozen in their reactions to a shocking situation and to hold the shot for several seconds with little movement. It’s a technique that’s equally as powerful as it is amusing. The overall message is that you lose something once you’ve taken revenge to the extreme. In Geum-ja’s case, it’s her daughter. She reconnects with her child, only to realise that she’s better off without her after the events of the film, which is heartbreaking but true. This is shown in the final scene when she partakes of the aforementioned tofu cake but then breaks down in the snow. She experiences a mixture of relief from finishing her mission and the realisation that she can’t be with her daughter who has a life in another county.

The film’s beautifully shot in amazing locations and Park has a unique ability to craft self-contained worlds in which his intense narratives can unfold with a hint of fantasy. As in SFMV, one of the main characters has a brief meeting with the deceased victim. In Lady Vengeance, Geum-ja’s daughter wakes during the night to see the boy who she was accused of murdering. Geum-ja encounters him herself later on and sees him as an adult, how he would look now if he hadn’t been killed at such a young age. Park skirts the edge of surreal very carefully without slipping off the edge, which gives the film an almost fairytale quality to it.

Lady Vengeance has a tone that could only have come from being produced in Korea and each country also has distinguishable features that are unique to them also. Discovering these fresh characteristics is the best thing about World Cinema. Bong-Joon Ho’s recent success at the Oscars with Parasite has done a lot to shed some light on this important part of the art form but real film fans don’t have to be told to seek out great work from other countries across the globe. So do yourself a favour and expand your horizons even more and be sure to seek out something from Chan-wook Park’s incredible body of work whilst you do. 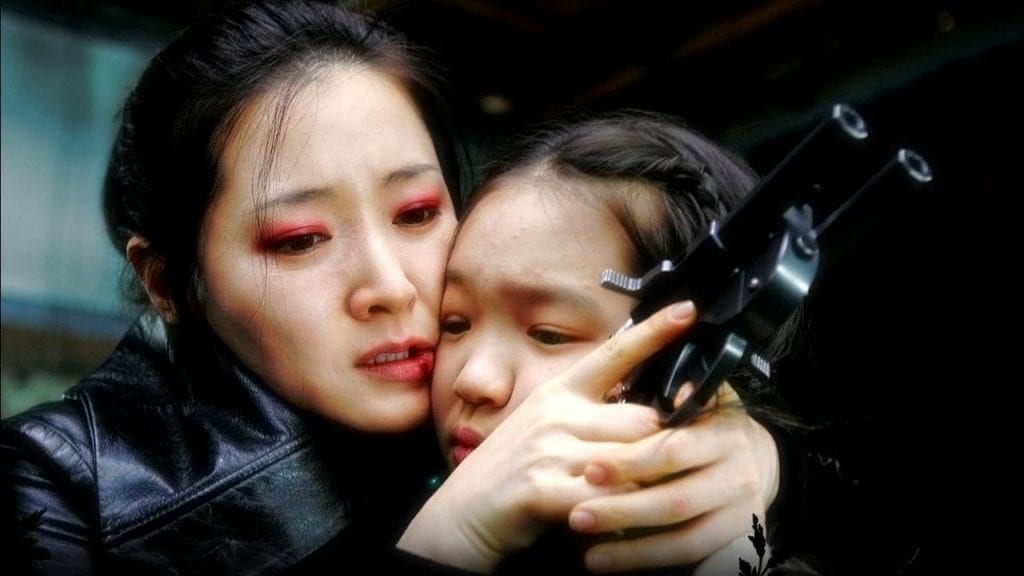