Nintendo dropped a new, and apparently final, major update for the popular DIY Super Mario Maker 2. While the content in this update is robust—and features the one thing I’ve been dying for since the original game was on the WiiU—it comes with the knowledge that this is indeed where Nintendo’s support of the title will (for the most part) come to an end.

Before we dive into a brief discussion about the sudden finality of updates for such an engaging title, let’s take a quick look at what the update has to offer.

New Items and Their Applicable Modes

The Super Mario Bros. 2 Mushroom: (Super Mario Bros. mode only) This mushroom will turn Mario into his rounder, pluckier version from the off-kilter sequel. This means he can now ride, lift, and toss enemies just like he did in Subcon lo those many years ago.

People have been clamoring for a Mario 2 mode to be added to the Game Mode screen, hoping that empty slot was eventually going to get filled in with a Mario Madness style. It doesn’t, but that’s OK (more on that later). This is really the only sensible way to work the play style of 2 into another game mode. Besides, the design possibilities alone add a lot for content creators to work with. I’m not a good Mario Maker myself, but I look forward to seeing what people more creative than myself can do with it.

Cool new additions to the mushroom include the ability to lift up Bullet Bills out the air and toss them back in the opposite direction; moving Chain Chomps around by the stake; and even pulling snowballs out of the ground in wintry themed levels.

The Power Balloon: (Super Mario World mode only) Remember the Power Balloon, or Buddha Mario as I used to call it, where you turn into a Mylar balloon and slowly float around for a bit? You can be forgiven if you don’t since it wasn’t used much in Super Mario World.
In the preview Nintendo dropped, you seem to be able to not only float, but kick-off and push yourself incrementally in midair as well.

The Super Acorn: (New Super Mario Bros. mode only) The Squirrel Mario costume is back, allowing you to jump, boost, and glide down gracefully. I’m a big fan of the Super Acorn so I’ll be gladly filtering levels that incorporate that mechanic.

The Boomerang Flower (Super Mario 3D World mode only) Raccoon Mario is my favorite Mario (I don’t need the Tanooki Suit’s statue trickery), but a close second is Boomerang Mario. It was super rare to find in Super Mario Bros. 3, but was the perfect scoop for out of reach items in the Super Mario 3D series, and it’s now included in the 3D World style here.

The Cannon Box: (Super Mario 3D World mode only) Turns Mario into an adorable cannon. You can shoot cannonballs, or hold in the button for a charged shot to strike far away items.

The Propeller Box: (Super Mario 3D World mode only) This fun item from Super Mario 3D Land and World returns. In this game, you can use it to execute three consecutive bursts in the air to reach new heights.

The Red POW! Box: (Super Mario 3D World mode only) This is a wholly new item, as you can use it three times just like the original POW boxes from the original Mario Bros. game. I especially like how each time you use it, one of the letters in POW burns out letting you know how many hits remain.

The Bullet Bill Mask: (Super Mario 3D World mode only) This is another new one. This item allows you to fly through the air just like a normal Bullet Bill would, only now you can turn your boosters off and descend in the air, and then boost again, granting more movement that the typical Bullet Bill.

The Cursed Key: (Super Mario Bros. mode only) Another Super Mario 2 “favorite” is the Cursed Key. Grabbing it will cause Phanto, the precursor to 3‘s Angry Sun, will stalk you around the course. Chucking the key will get Phanto off your tail (whether you have a literal tail or not).

On/Off Trampoline: (Super Mario 3D World mode only) Trampolines can now be activated and deactivated with an On/Off Switch. 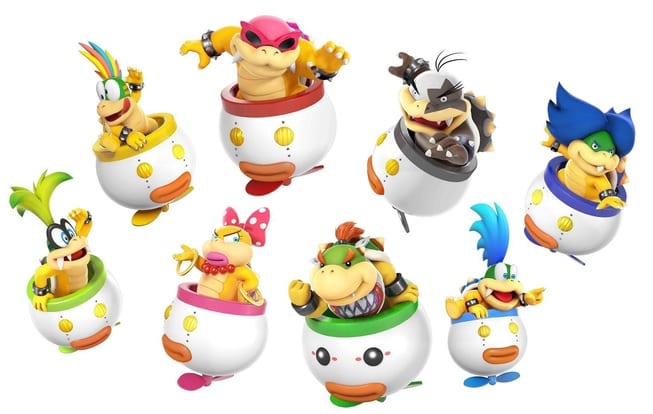 MechaKoopas, the enemies that don’t show up until the final level of Super Mario Bros 3 are back, and usable in all modes (except 3D World). Not only that, there are now two new versions of them. The red versions shoot homing missiles out of their mouth; while blue ones attack with laser beams strong enough to destroy breakable bricks.

At night, all MechaKoopas come equipped with jet engines, allowing them to launch themselves higher than their normal little hop.

The real big news is the addition of the Koopalings, Bowser’s dutiful offspring. Available in all modes (except 3D World), the Koopa Kids (all 7) and back, and you still can’t tell Iggy apart from Lemmy.

The new game mode, filling in that mysterious slot many had hoped would go to Super Mario Bros. 2, is something Mario Maker fans have been dying for since the original game was out for the WiiU. Finally, you can create you own Super Mario Bros. game, complete with an overworld map that you can customize in World Maker!

This mode allows for up to 8 worlds and 40 levels. For the first time, you can play someone’s entire game, meaning you can have a full Mario game experience made by users worldwide. That’s an amazing thing. Even a horrible designer like myself is amped about the potential in this. The look is a cross between Super Mario Bros. 3 and Super Mario World‘s map. Toad Houses with bonus games can even be added to the world maps, which can have their own themes as well, meaning you can make World 3 a desert level instead of World 2. Break that Mario mold! Be bold!

While this is a phenomenal update, with so many new gameplay options, I am a little disappointed by the overall lack of engagement Nintendo has had with Super Mario Maker 2. While the original game for the WiiU had frequent updates, they were often superficial ones, usually involving Amiibo support, and new skins for Mario to play as in Super Mario Bros. original mode. I don’t mean to imply that the original game got more support, it merely had more incremental add-ons peppered in throughout it’s run.

I had hoped, perhaps foolishly, that Super Mario Maker 2 for the Switch would get more online support. It seemed like Nintendo had a chance to keep the community interest up long term. As a huge fan of the original, I found the follow-up to be an improvement in some aspects, while a letdown in others. I’ll elaborate on that in a forthcoming Mario article, but for now I’ll just say that I had hoped the updates would be more frequent. This is only the third major update the game has gotten, and it’s apparently the last one of any substance.

Nintendo clearly is moving on to support Animal Crossing (and why shouldn’t they?), leaving Mario Maker 2 as a good game that could’ve been great. While I think the World Maker mode will be a big help drawing lapsed gamers back to the title, it will only be a temporary boost, as everyone is aware that Nintendo is dropping any meaningful support for the game going forward.

Nevertheless, I’m still excited to see what people come up with, and I am eager to play people’s custom made Mario games, so long as they aren’t those crazy, Kaizo-style ones. I’m not about that kind of Mario Madness.

The latest Super Mario Maker 2 update is available April 22, 2020, only on Nintendo Switch.