This week We’re Just Playing…Death Stranding, Cadence of Hyrule, and Resident Evil 2. Plus, we muse on those The Last of Us Part II plot leaks and defend Naughty Dog—which we don’t always do here. So let’s see what’s trending in our own personal zeitgeist this week!

Love him or hate him, there is no one else like Hideo Kojima in the industry. He takes big ideas and runs with them, and often will see them through to fruition (budget and time notwithstanding). It’s reportedly why Konami cut ties with him over Metal Gear Solid V: The Phantom Pain. Yet his ideas work, which is amazing especially considering the hours of cutscenes in his games and frequent narrative redirects and narrative misdirection. Patience and perseverance with his vision is often required. Death Stranding on paper and in practice are two very different things, and it’s difficult to understand the full breadth of what the game is doing without actually playing it, but I’ll try.

Taking place in the United States following a cataclysmic event called the “Death Stranding,” the country has fallen apart. Invisible monsters called BTs (“Beached Things”) roam the land, and a deadly rain called Timefall, which rapidly accelerates time—and therefore, also deterioration—has driven the population into disparate cities called Knots, disconnected from each other. Sam Porter Bridges (The Walking Dead‘s Norman Reedus) is a courier, delivering supplies between different cities and performing the odd job for the CIA. Sam is also able to sense BTs. This, along with an ability to return from a death state, makes him an ideal candidate for the President’s (Lindsay Wagner) final wish before death: to travel to the west coast, rescue Sam’s sister Amelie (Emily O’Brien), and reconnect the Knots to reunite the country. And that’s just the first couple of chapters.

Death Stranding is a breathtaking game. While it takes some time to fully materialize, there is a harmony to the different gameplay systems that make it a completely fresh and unique experience. At its core, it’s a courier game. As Sam Porter Bridges, the player accepts delivery jobs from one location, and then treks across the desolate United States to deliver the item. These packages, in turn, can be used to craft new items to assist Sam on his trips. The terrain of the United States is uneven and treacherous, often requiring portable ladders and climbing rope to efficiently traverse. The main mechanic here requires Sam to remain balanced. Weight physics and momentum are very real here: the left and right triggers are used for Sam to shift his weight if he begins to tip, and the items being carried need to be arranged correctly and kept within the weight load limit to keep Sam’s movement efficient. These mechanics will drive some away, and they can definitely be frustrating, but letting the game breathe and move at its meditative pace is tantamount to the experience.

There’s something of an online element to Death Stranding as well, in that if a player chooses to leave a helpful ladder, foundation of a structure, or cache of supplies behind, another player may then come across that in their own game. Players won’t see each other in the game, but they can utilize the things left by one another. There’s nothing quite like the rush of relief to climb over a difficult summit and see a ladder there to make the next ledge that much easier.

As Sam continues to travel to new waystations, he connects them to something called the Chiral Network, reconnecting the disparate, fractured population of the country. This is where things get weird. Sam is connected to an infant child in a small tank attached to his chest called a Bridge Baby (or BB), a prematurely removed child with a connection to both life and death, to assist its companion in detecting BTs. Despite the warnings of a doctor named Deadman (featuring the likeness of Guillermo del Toro, and voiced by Jesse Corti), Sam finds himself caring deeply for BB (there’s even a control mechanic to soothe BB when it’s distressed).

It’s wild stuff, and that’s not even considering a CIA agent named Die-Hardman (Tommie Earl Jenkins), grubs that restore blood levels, and the fact that blood and other fluids can be repurposed into BT-damaging weapons. Despite all of that, the first few hours, of which I haven’t yet gone past, are meditative, beautiful and hopeful. Another courier named Fragile (Lea Seydoux) is always a welcome sight, and at certain moments during a trek across the land, a beautiful track from band Low Roar kicks in, which can be genuinely emotional. The game is exceptionally bizarre, but I’m fully drawn to it, astonished by the performance of Reedus and others, completely on board with the bonkers writing and distinctive mood, and fully prepared to see where the story goes.

I’ve been rather predictable this week, having stuck with The Nathan Drake Collection and Persona 5 Royal as usual. I managed to finally beat NDC, and I have to say that between this and The Last of Us, I really don’t see the hype behind modern day Naughty Dog. While far, far from a bad developer, I find the excessively linear nature of their games off putting, because their idea of mixing things up between the decent-enough action (in both series) is boring walking and/or climbing sections where you don’t really learn much or progress the story in any meaningful way. That being said, I definitely enjoyed the over the top set pieces in the Uncharted series, with the train in 2 being a highlight, although the cruise line sinking and the plane shootout in 3 was also a blast, pun fully intended. I think at the end of the day, 2 had the best set pieces while 3 was more enjoyable over all (even though the cruise line section didn’t progress the story in a single meaningful way). They’re not bad games, but if it hadn’t been free, I wouldn’t have played them, and now that I’ve beaten the games once, I’m unlikely to revisit them ever again. I just can’t gel with Naughty Dog’s idea of stretching the games out with boring filler.

I would like to touch on Naughty Dog, and more specifically, the leaks that have recently occurred regarding The Last of Us 2. For those of you that haven’t seen the info that got leaked, I’m not going to say what it is. I won’t be responsible for spoiling it, because I know that a lot of people are looking forward to the sequel. But the leak spoiled a lot of pretty huge events in the sequel, and fan response has been… baffling to say the least. I’ve seen a lot of people immediately dismiss the game as trash, and poorly written, and even pushing a political agenda by the more closed-minded among the fan base. To me it shows that a lot of people didn’t “get” the first game and its message, because what was leaked is potentially a really clever subversion of what people might expect, and forces players to reconsider the events of the series from a new angle. In a storyline ostensibly about how far people will go to survive, it’s an interesting idea. People that know the leak know what I’m referring to, but again, I won’t be responsible for spoiling it for those that want to go in fresh.

Lastly, I had an article go live yesterday regarding Cadence of Hyrule: Crypt of the Necrodancer Featuring the Legend of Zelda and in my perusing of the internet to refresh my memory on certain aspects of the game, I found out that there was a patch released that gave players a brand new story mode where you play as the game’s villain, Octavo. It was a great surprise, so I booted the game up and started a new file. So far, it’s been fun playing as the villain even though not much is changed from the regular story. But the game has such a strong foundation that I only meant to play a half hour or so and wound up playing nearly three hours’ worth. Suffice it to say, I’ve enjoyed returning to this musical version of Hyrule since beating the game last year. 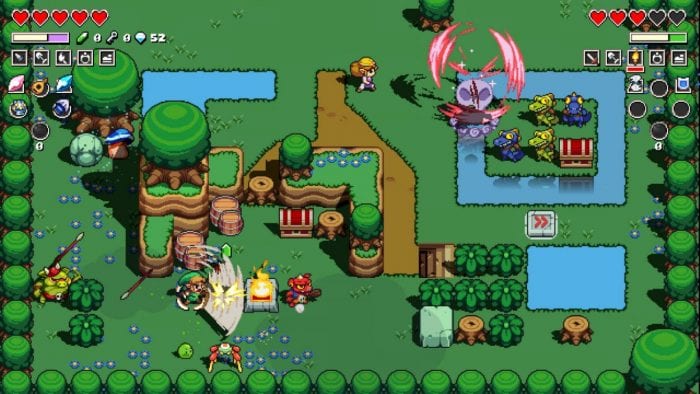 I have been playing Resident Evil 3 non-stop. It’s so good. My original Day One review was positive, and my Final Review (coming next Monday) is [Spoilers!] about how addicting the gameplay is. So instead of talking about that, I’m going to talk about another game I transitions over to in order to sate my RE fix—last year’s Resident Evil 2 remake.

Exploring the RCPD is a little bizarre after spending a short amount of time there as Carlos in RE3. Certain things related to the story, and the continuity between the two games are interesting to spot. While the continuity is dodgy at times, I easily hand-wave most of it due to the fact that RE2 has two different characters with two different playthroughs. The continuity doesn’t need to track through anything other than the game mode you are currently playing.

Nevertheless, I found myself dreading the arrival of the Tyrant, the Nemesis-like creature that stalks you at random throughout the game once he makes his grand entrance. Some people took issue with Nemesis arriving at specific times in the RE3 remake, as opposed to his random pop-ins from the original PSX version, but I think that choice works for what kind of action-horror game RE3 is ultimately trying to be. It’s more in line with RE4 onwards, with some Resident Evil: Revelations mixed in there as well.

Once the Tyrant arrived, I remembered how stressful it was to wander around trying to solve puzzles with the sound of those clomping feet persistently in the background. Moving around the library particularly, where you must move several book stacks while the Tyrant, and a bevy of zombos constantly try to kill you, I was reminded how tense I got playing these sections.

Soon enough, I was in the clock tower, running through tight spaces, hoping the door wouldn’t swing open to reveal my big, gray stalker. It’s a whole different experience knowing that guy is always on your ass, but I’ll take it. I need new modes to complete, more S rankings to attain, more cute little outfits for Claire (I forgot how cute she was!), and more unlockable weapons.

Yes, I think it’s fair to say I’m getting back into the Resident Evil series again. Hardcore mode.