For the first time in The Other Five (the name given to the second half of this Season 4), the entire Sanchez family gets to go on an adventure together, and it’s a nice diversion from the largely Rick and Morty-centric antics of the last few episodes.

Jerry, true to form, is very excited to express his worth and take the family on a camping trip. No one’s particularly happy—Summer would rather be doing drugs and partying and Morty wants his video games. Even Rick is tagging along, which seems odd, until his phone starts vibrating: it turns out that Rick, not unlike with Unity in Season 2, has gotten intimate with a planet—Gaia this time—and she’s pregnant. Beth demands that Rick visit his baby momma immediately, so Rick replaces Jerry in the driver’s seat and they fly off to visit Gaia.

The standard dynamic of pairing Rick with Morty (with Summer sometimes tagging along) and Beth and Jerry shifts in a refreshing way for “Childrick of Mort.” This time, Rick and Beth get the A-plot with Morty and Summer enjoying an uncommon sibling dynamic, and Jerry off doing his own thing.

Upon their arrival, Gaia gives birth—a process involving hundreds of thousands of spiky-haired clay creatures being vomited from a geyser and screaming “I AM!” Beth convinces Rick to help save the children, and the pair proceeds to help develop them into a functional society by routing each of them through different tubes leading to careers and job functions. This sequence is rife with painfully funny (and accurate in a twisted way) dunks on a multitude of professions. Then there are the “unproductives,” who get fired out of the back of the machine and into the muddy, undeveloped land below.

Jerry hit rock bottom when he and Beth took a break and a miserable Jerry retreated to a dirty hotel room. He’s since returned to the family, but that doesn’t mean he’s caught a break: in fact, the show’s writing team appears to not only be continuing their dunking on Jerry, but making up for lost time. In the pre-credits-sequence, Rick remarks on Jerry’s “dumb vacation with a family that doesn’t need you.” Jerry notes that no one in the car sticks up for him. Pretty much every single main character in this episode gets a chance to insult Jerry, with perhaps Summer getting the best opportunity with an absolutely withering put-down that ends up being one of the inciting events of the climax. It’s legendarily hurtful, cutting deeply into her father as it points out his pitiful attempts at mining a sense of self-worth and even a modicum of respect from his family.

Summer’s diatribe is emblematic of the alarmingly dysfunctional nature of this family, and shows that her time with Rick has made her much like her grandpa, something that Morty worryingly points out.

Hurt and frustrated, Rick leaves his children and walks into the woods. He angrily tries to skip a rock and, in classic Jerry fashion, completely misses the water. The rock ricochets back into Jerry, and he tumbles into the river, over a waterfall and directly into Rick and Beth’s machine, where he is sorted into the “unproductive” set of clay children, whose blank slates are ripe for Jerry to finally do what he’s been wanting to do–teach some camping! The clay children, knowing nothing else, immediately begin to worship Jerry.

Morty and Summer’s plot is relatively simplistic, but it works in how it develops them as brother and sister. It’s unusual for them to really connect like this, reinforcing Rick’s magnetism for chaos and how its absence finds the siblings enjoying their time working together with a relative absence of anything too horrifying happening.

Morty and Summer stumble across a crashed alien ship, where, apparently desperate for stimulation, they both end up doing the things they’d wanted to do at the beginning of the episode: Summer observes that the tubes and tanks resemble her friend’s bong and immediately begins toking, and Morty excitedly states that the ship’s control panel is just like his video game controller. Now, while the Sanchez kids might be learning more about the universe the more time they spend with Grandpa Rick, they’re still stupid; it’s soon clear that both of them were incorrectly presumptuous to compare this alien technology to their Earthly vices. Summer proceeds to get extremely high while a confused and overwhelmed Morty panics over what he should do next—like it or not, it seems they need Rick to help them through these situations.

Jerry has been enjoying his newfound respect and dominion. When one of the clay children comes up with a crude concept for a house, Jerry angrily rebukes the idea. When asked why Rick and Beth’s civilization has shelter, Jerry labels them as the antagonists and inadvertently incites a war.

As Rick and Beth celebrate the momentous culmination of six days of work, Gaia sheepishly admits that the children are not, in fact, Rick’s. This is both funny and not entirely surprising: as he is wont to do, Rick begins a line towards the beginning of the episode with “even if they were my kids, which they’re not…” mirroring Rick’s eventual hubris in the previous Acid Vat episode. This time, he was right. At that moment, the real father shows up—a very crass Zeus, who immediately starts a brutal fistfight with Rick. Rick is now is acting on principle that he raised these children even though they’re not his own. 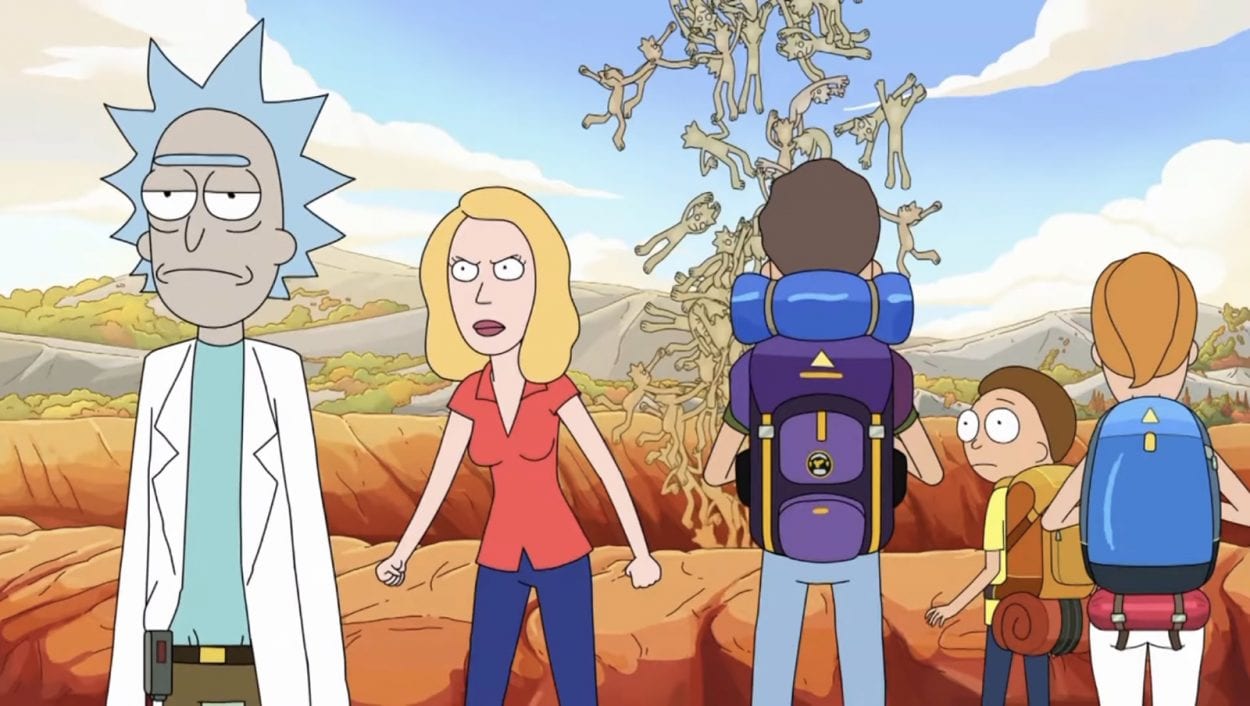 As Rick and Zeus brawl above the clouds, Beth and Jerry pit their armies of clay children against each other, airing out their grievances at the same time. The source of their argument, once again, is Rick. Jerry feels worthless that Beth tries so hard to gain Rick’s approval, and Beth is angry that Jerry can’t accept Rick as part of the family. With Rick getting beaten badly, he surrenders the children but begs Zeus to keep the city because it’s important to Beth.

As Zeus prepares to kill Rick, Rick’s grandchildren suddenly show up, having fired up and lost control of the ship, and plow it straight into the back of Zeus’ head. The dead Zeus plummets to the planet’s surface, causing Beth to nearly fall into a fissure. Jerry sets aside his anger and rescues her (not without accidentally stabbing her in the hand with the s’more stick, because he’s Jerry and he sucks).  “Getting high and playing video games is the best!” Rick proclaims, praising his grandchildren for saving him and promising to never sell them out on what they’ve been doing this episode.

In the final moments of the episode, on their drive home, Beth references how Jerry saved her, “no thanks to  you.” Rick angrily reneges on his promise not to sell out Morty and Summer and uses their actions in the episode to criticize Beth and Jerry’s parenting, dissolving most of the goodwill he and Beth had been enjoying for most of the episode.

So really, nobody is a good parent here, or at least nowhere near to perfect. Each parental character either incorrectly thinks they know best, doesn’t care, or messes it all up by the end.

“Childrick of Mort” is a solid, if unremarkable episode. The strength mostly lies in the dialogue, particularly when it comes to the insults some of the characters hurl at each other. It was also great to get the whole family together again, as some of the strongest character work in the show involves the dynamic between Rick, Beth and Jerry and the absolute volume of toxicity that exists in this family unit.

We’ve one episode remaining in Season 4, and “Childrick of Mort” seems like it may be setting the stage for some serious character conflict to close out the season. It probably won’t be that heavy, but as the show gradually expands its scope beyond the titular pair, various tensions and relationships are going to be brought forward, however comically, and the show will continue to explore how this awful family interacts. There will always be that nugget of genuine care and love, but the toxicity remains at the forefront. 60ish episodes remain in Adult Swim’s mammoth contract with the showrunners, so there’s still plenty of time beyond next week’s episode to see what happens next.