I found Earthbound in a bargain bin just outside the automotive repair department of my local Sears. There were dozens of copies of the large rectangular shaped boxes in there, all marked CLEARANCE $19.99. I had wanted to buy the game when it first released, but I wasn’t making my own money at the time. However, I did have enough cash to buy one that day, forever changing my perception of what an RPG could be.

As many people now know, owning the original box, complete with scratch-n-sniff manual, are worth several hundred dollars on eBay. I should know, since shortly after getting married and buying a house in 2007 (not exactly the best time to have bought a house) I wound up having to part with my beloved mint-condition Earthbound in order to make a few bucks. It hurt. Still does a little.

Plenty of people have never played Earthbound, as it was a SNES exclusive in America, and only released on the WiiU Virtual Console back in 2013, the 3DS in 2016, and was bundled into the SNES Classic in 2017.

It was the second game in the Mother trilogy, and Western audiences never got the original Mother until, it too, was released on the WiiU Virtual Console under the name Earthbound Beginnings. We’re still waiting for Mother 3 to be released in America, although via emulation, the Mother/Earthbound community has managed to translate the Japanese version into a playable English version.

Earthbound is in many ways not unlike an Evil Dead II, where it’s part retelling/part retread of the original. Having played the original Mother, I found it hard to get through, as it’s a less-pretty version of Earthbound. Unlike say the first two Evil Dead movies, where the tone was different in each, Mother and Earthbound are very similar, while not exactly the same game.

Earthbound for the SNES has maintained its cult status all these years due to the fact that when it was released, it sold poorly, due mostly to strange marketing and tag lines like “This game stinks!” (an unclear reference to the scratch ‘n sniff portions of the game manual).

The booklet was the reason for the large rectangular box Earthbound came in, and it maintained the humor and charm of the game. Sadly, the box art and advertising for Earthbound was simply bungled.

The game itself, written and directed by Shigesato Itoi, and produced by Satoru Iwata, was a mild subversion of RPG tropes, as it sought to place a standard role playing game in the Western world, while still having the look and feel of a game where a group of four “warriors” go on a quest to save the world.

Enemies could be anything from anthropomorphic lamps to crazed hippies. Items collected were seemingly of a more mundane nature, but were used to solve intentionally silly puzzles much like your normal RPGs (which themselves, often had strange, non-linear logic to them as well).

The game was mischaracterized in some early reviews as having an “8 bit aesthetic,” when the graphics, visual effects, and quality are all sublimely of the 16 bit era. The music was poppy jazz, and the ambient noises and sound effects were quirky and effective, and certainly far beyond anything 8 bit games were capable of.

While Earthbound was influenced by many other games (I even see bits of River City Ransom in there), it has inspired generations of games since. I doubt there would have been an Undertale without Earthbound, and despite the fact that game did not grab me as much as it did for others, the influence (the design, the clever combat system, the weird story) is visible with the naked eye.

Even a game like Lisa the Painful (that game my co-editor, Collin Henderson, won’t stop talking about) is heavily influenced by Earthbound. Don’t worry, Collin, I never go three articles without shoehorning in a Binding of Isaac reference. We advocate hard for the games we love. To talk about the plot of any of those games is to partially ruin the experience of playing them (especially Lisa, whose story is deeply layered and full of in-game consequences based on your choices).

Another influence that, frankly, more RPGs should adopt is how once you outmatched certain enemies, they ran away from you. If you pursued them, instead of going through the motions of a tedious battle, you were automatically rewarded a victory. That cut down on needless encounters with enemies where you had little to nothing to gain from them.

Earthbound was not the first game to make enemies visible, but it did make enemies mostly avoidable (unless in cramped, tight locations). This allowed players to level up at their own pace. Certainly, you can’t pass most bosses without leveling up to a specific degree, but you had more of a feeling that things were being done on your terms, and not the game’s.

When Earthbound premiered in America on June 5th, 1995, it was a commercial flop. Despite that, it is now widely regarded as one of the truly great SNES games (and RPGs) of all time, and remains one of my personal favorites, due to its quirky humor and beautiful, timeless animation.

With any luck, Nintendo will re-release one, or all, of the games in the Mother/Earthbound series to celebrate the anniversary, but as fans of the series know all too well, Ness, Lucas, and the rest of gang are usually just relegated to the Smash Bros. series now.

Oh well. All we can do is just smile and say, “Fuzzy Pickles!” 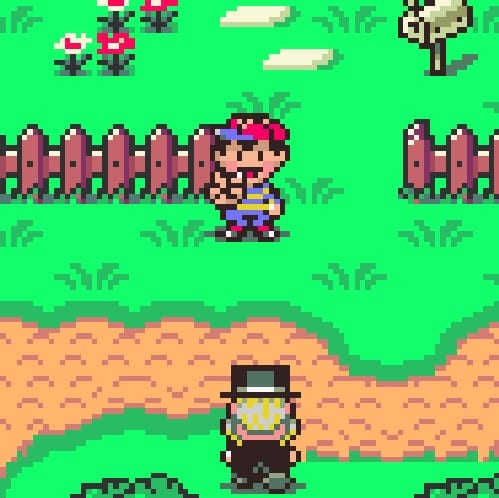