Johnny, Conor, and Collin chime in with what games are trending in their personal zeitgeist this week, as we recap all the games We’re Just Playing this week.

My replaying the Final Fantasy games for our current series on the franchise has gotten me quite nostalgic for old PSX games. Recently, I’ve had a renewed interest in the Resident Evil series, and since my PS3 is still viable and loaded with PSOne classics I’ve collected over the years, I’ve begun replaying the original Resident Evil: Director’s Cut. I never got into multiple playthroughs of the original trilogy when it first came out, because I would play with my friends, and we’d move on to a new game once we beat it, so my plan is to dig into these games and experience all the content I know I’ve been missing all these years.

I am currently doing a Jill run, and I’ve found that my memory is pretty decent, but I still do a fair share of aimless wandering back and forth, even early on. My plan is to play through the game multiple times, increasing the difficulty as I go, and improving my mastery of the series. The replay value is what the series is all about and I feel like I missed out of that when I played RE and RE2 back when they first came out.

Also, after getting 100% in the RE3 Remake, I’m interested to go back to the original version, as I know it is staggeringly different. While I loved RE3R, and found it to be great escapist fun, it was completely missing anything that could pass as a puzzle, it relegated Nemesis to appearing at set points, and offered practically nothing for completing the game on different difficulties and/or getting a higher grade. I got addicted to unlocking items by completing challenges, which lead to better perks and weapons, which made harder runs easier, but there was no extra content beyond that.

Those old RE games are short, but offer more interesting replayability. Now that I’ve got my Platinum trophy, I’ve already deleted RE3 from my PS4 hard drive. I’ll probably never play it again. Meanwhile, those janky, lumbering piles of polygons draw me back year after year for a playthrough.

Nothing feels more satisfying than checking a game off your backlog, especially when said game is God of War II. I loved this game enough to immediately restart it upon completion to acquire the platinum trophy. The last few trophies were tough but were balanced. Having a fair and challenging achievement list is underappreciated in the gaming industry. I am sure most do not care about these lists, but for me it feels like I am getting full value from games that I want to play to the max.

Is the sequel better than the original God of War? I might revisit the first game and go for the platinum trophy to refresh my memory. Both games run about 10-12 hours long, which is refreshing compared to the current games industry. Quality over quantity.

With the hot weather sweeping in, there were days where I had to cool down and not play intense sessions of God of War II. My new favorite relaxation method is playing visual novels. I tested the waters with Stein’s Gate and was blown away with how much I enjoyed pressing X for 30 plus hours. I decided to explore other highly regarded visual novels particularly for the Vita.

The Danganronpa series is often mentioned in lists for Vita fans. I am currently on the third chapter of Danganronpa: Trigger Happy Havoc. The basic story is about a group of elite students who get trapped in an empty school. They all lose consciousness upon arrival, and when they wake up it is revealed that the only way to leave is to murder each other. The students have a trial after each murder, and it is your job to solve the mystery or everyone will die.

I am little let down coming from Stein’s Gate. The story is engaging but I don’t feel a strong connection with the characters. Compared to God of War II, I will complete Danganronpa but not go for the platinum trophy. I heard the sequel is the best in the series. I have it waiting in my backlog for when I need another more relaxing game experience.

Johnny, sometimes it’s good to go back to nostalgic games. It’s dangerous because sometimes they aren’t as good as we remember them being, but it can still be nice returning to old favorites. As much as I love playing a brand new game that’s totally fresh for me, I think there’s something to be said for returning to an old game and the comfort that gives you.

Conor, I’ve heard Stein’s Gate is amazing. I’m something of a fan of VNs myself (this past year I played through the first two Death Mark Games, which are both nice little supernatural horror stories). My sister is a huge fan of Danganronpa, but I haven’t played them myself. It’s been on my list for a while now. I’m familiar with a lot of it, though. If that’s not scratching your VN itch, can I suggest the Zero Escape series? It tackles some really interesting sci-fi subject matter (to say what specifically would be to spoil a lot of what makes the stories so great). The first game in particular, Nine Hours, Nine Persons, Nine Doors, stands tall for me, telling a nice self-contained story but still leaving room for the two entries that followed it. They’re all really great.

For me, I haven’t been playing much new of anything. I’m in the final third or so of Persona 5 Royal, and I have to say that it somehow has managed to remain compelling during my 75 hours with it so far. I think it’s something I’ll write about in the future once I’ve reached the end.

I did start playing New Super Mario Bros U Deluxe for Switch since it was on sale and I was hankering for some traditional Mario action. It’s one of the games we didn’t cover in our extensive retrospective on the franchise, and that’s mostly because it’s about as standard as Mario games get. Sure, there’s a nifty new upgrade that lets you fall slower, but it’s a straightforward 2D platformer through and through. Mind you, that’s exactly what I signed up for. I’ve kind of been “test driving” several different games to see what a good pallet cleanser would be once I’m done with Persona. It might be New Super Mario Bros U Deluxe since it offers something that’s similarly colorful and upbeat to Persona, and that’s what I want to focus on right now. The world is in a very sorry state and playing games with positive messages or atmospheres has helped me get through everything so far. 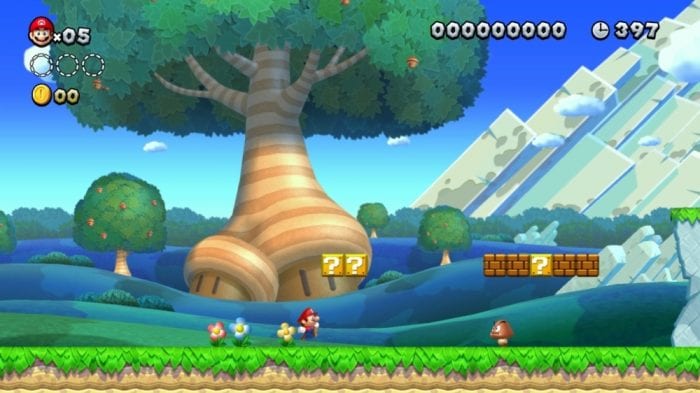 New Super Mario Bros. U came bundled with my WiiU, so I had no reason to get the “Deluxe” version. I’ve always contended that Mario games are easy, but come with challenging levels once you beat the “main” game, but U and U Deluxe come with Super Luigi U, which is a remixed, hard mode featuring Slippin’ Luigi forced to complete levels in 99 seconds. This is a game (or a DLC add-on, depending on how you view it) that is all Hard Mode.

The WiiU version had videos showing runs where the player would perform amazing tricks and combos, and the levels were clearly designed to allow the player to pull off some cool moves. Luigi U was where bold leaps of faith often paid off, and experimentation led to interesting moments where you would see split-second opportunities for Luigi to use his high jump to execute maneuvers Mario never could without the use of a special suit.

While fast paced, time restrictive gameplay often isn’t my cupper, Luigi is a Nintendo platformer, so it’s masterfully done, and always fair to the player, which is all I really ask when playing somewhat stressful games.