The ’80s were a wild time for horror, and there were a lot of really great films and franchises birthed from that era. Some were maybe not as well appreciated; some might call them B-horror films. What I need you to know about me is that I love B-horror, I almost prefer it most of the time. I am not sure if my four top favorites are all going to fit the bill of B-horror in everyone’s mind, but if you want to come to the defense of any of my choices, please just remember, coming from me, B-horror isn’t a bad thing.

I am actually going to begin with what I think is the most mainstream movie, The Stepfather (1987). This film centers around a simple fellow who just wants the perfect family. Jerry Blake, played by the magnificent Terry O’Quinn, will stop at nothing to find and keep the ideal family unit.

Sure, he might have high standards, and maybe some of his desires are a little far-fetched, but who here wouldn’t want a perfect family given a chance? Jerry just cannot seem to understand why things never work out for him, as he finds himself having to start all over with a brand-new family.

He sets his sights on a new wife, Susan, played by Shelly Hack, a widow, and she comes with a teenage stepdaughter, Stephanie, played by Jill Schoelen. This is the ready-made family of Jerry’s dreams! Things start off well enough, as they usually do for our main character, but things quickly begin to fray when Stephanie questions her new stepfather.

Jerry doesn’t take any kind of suspicion well, so it’s only a matter of time before his new stepdaughter threatens that perfect family Jerry has been working so hard to earn. There is just something about this film that I love, despite being pretty predictable. Perhaps it’s Terry O’Quinn and his brilliant acting. The familiarity of a horror thriller is also always welcome. I have seen the remakes and sequels, and I love them all.

Oh my, those Cannibalistic-Humanoid-Underground-Dwellers, they will get you every time. If you have seen this movie, you know it had a bit of an influence on the more recent film, US. What bizarre and terrible things might be going on just below our feet? C.H.U.D. (1984) certainly works to give us one possible answer to that question.

This is one of those that I don’t want to say too much about, I think you need to watch it for yourself. I personally believe it perfectly fits in the B-horror category, between the special effects, the overall tempo of the film, the way the characters are played—just about every aspect of the movie screams B-horror in the best possible way. It has a little bit of everything.

Without giving too much away, I will provide you with some of the ingredients. We have police Captain George Cooper, played by John Heard, with a vested interest in missing persons who gets caught up with the conspiracy peddling “Reverend” Shepard, played by Daniel Stern, who runs a homeless shelter. The two embark on a mission to find the city’s missing population and stumble upon something straight out of a weird nuclear B-horror film. This has got to be one of my favorite movies that I stumbled upon later in life, it really does hit the mark on everything I want out of this type of horror. 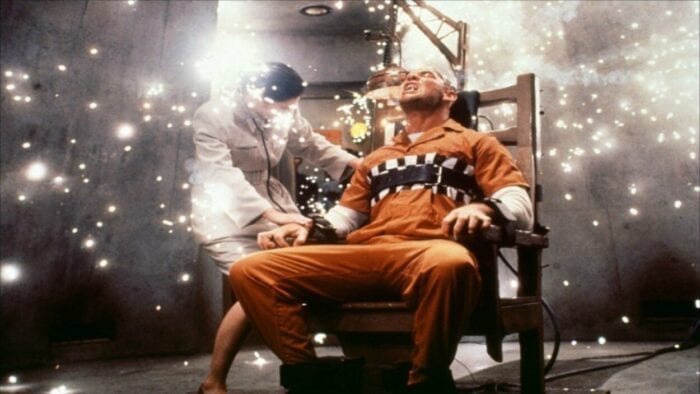 I love this movie, just right out of the gate, Shocker (1989) is one of my ridiculous go-to films. I have a tendency to forget that it exists for a few years and then discover it all over again. Sometimes I forget how long it really is, how much happens, and just how clearly Wes Craven this movie is.

There are actually quite a few characters to know in this movie, but I would say the main two, the two that go head to head, are Johnathan, played by Peter Berg, and Pinker, played by Mitch Pileggi. Johnathan is a teenager and the foster child of Lt. Don Parker, played by Michael Murphy. An unfortunate series of events put Johnathan and Pinker, a criminal, on a collision course.

Shocker has a lot of elements that will be familiar from the dream-like worlds created in the Nightmare on Elm Street franchise. It almost seems as if it were meant to exist in that same world as Freddy, but somehow never took off. There is something about it that lacks the mainstream charm of Cravens’s more successful franchises, which is why it makes it on my B-horror list.

I still think it’s a good story, if not a bit too long, and has the familiar stretches-too-far that are often found in this sub-sub-genre of horror. In my mind, it is without a doubt, worth the watch, just make sure you have the time for a few plot shifts here and there…and then again over there. 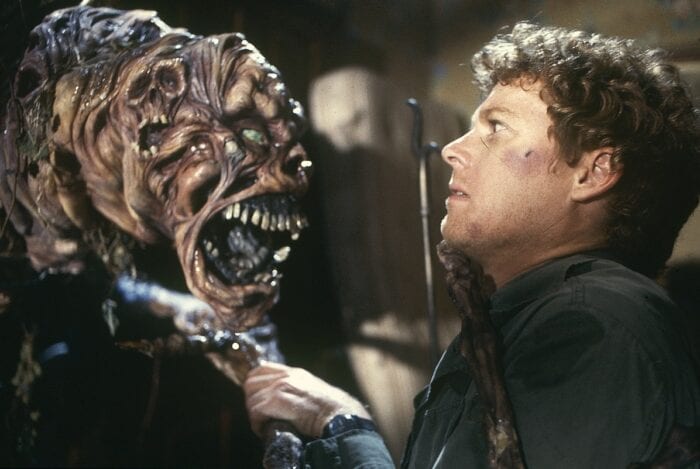 House (1986) is the best/worst on my list. It just depends on how you choose to define “bad,” really, because House is so impressively terrible that you have to love it. I think those are the rules…like I am reasonably certain this is how film works.

Our main character, Roger, played by William Katt, has a troubled past as well as a troubled present. The author is just about as down on his luck as he can get when he decides to move into his recently deceased aunt’s home. He wants to stay in the house to work on his next novel, to get a little peace and quiet so he can really get some good writing going. His last book—it didn’t do so well. So you can imagine that Roger isn’t in any hurry to get back into the spotlight until he has a new and better novel for the masses.

There is a lot of family turmoil wrapped up in this house, there is a lot of extremely weird…everything in this house. The fun part is going along with Roger, trying to decide if he is descending into madness, on the verge of a personal breakthrough, or straight-up living in a haunted house. It is a silly good watch if you share the same love of B-horror that I do. I would venture as far as to say that if this film doesn’t make your B-horror list, maybe it’s time to lower your standards and give it a chance. There are also many sequels, and I have enjoyed each one, at least a little bit.