Get On Up, the 2014 film from The Help director Tate Taylor breaks away from a good chunk of the formula and cliche pitfalls that beset biographical films. With the casting of the then lesser-known Chadwick Boseman and the flavor by which it does its time-hopping, Get On Up succeeds in those two extra qualities that I like to see in a really good biopic. For that, the film separates itself nicely from the rest of the pack as one of the best biographical films in recent memory.

Biographical films made by Hollywood have their basic formula ingredients that are pretty stock and simple to the point of cliche. You need an interesting subject person, with a preference to the famous so that there’s a built-in familiarity for ticket buyers. Next, you need enough of a somewhat-brutal honesty to show the good and the bad about the subject. Sugarcoating is allowed, but everyone prefers a flawed character that eventually makes good. Finally, your subject person needs a story that moderately has a beginning, middle, and an end. That’s easy enough to the point of redundancy.

That redundancy brings out the cliches that invade biography movies and make them sometimes tiresome. Those cliches range from truth-bending character choices, casting controversies, excessive sugarcoating, repetitive life and career problems, forced happy endings, and every overdone cinematic flashback trick in the book. The list of biography films that fall for both the same formula and these common cliches is long and distinguished. Even the worst perpetrators have made money and won Academy Awards.

A stellar biography film aims to break two pieces of that formula. Casting an unknown actor or actress in the leading subject role is first. It is very difficult for recognizable stars not to come across like themselves before the real-life character they are playing. Sorry, Jamie Foxx, Joaquin Phoenix, Jim Carrey, Will Smith, Michelle Williams, and a zillion others. They were all good trying to be Ray Charles, Johnny Cash, Andy Kaufman, Muhammad Ali, Marilyn Monroe, and a zillion others but many of our movie-loving eyes cannot be tricked. They needed to act their asses off, and some of them do. Not everyone can be Meryl Streep and don’t even start on the terrible overused biography casting of Anthony Hopkins over the years. With a reasonably unknown performer, those preconceived notions and opinions melt away, enabling you to absorb both the character and the performance as one.

That casting challenge is a big boost, but the second piece of the basic formula that has to be shaken up is the cinematic storytelling. Yes, movie studios pay their name actors to be on-screen as much as possible, but that leads to multiple flashbacks sometimes to tell a birth-to-death story. Flashbacks are a necessary evil, but they can easily go on too long or too often and take away from the thread of the story. A biopic that dares to put a few extra wrinkles and curves into its narrative is admirable. It’s the cliche that is easiest to break, but the hardest to pull off. 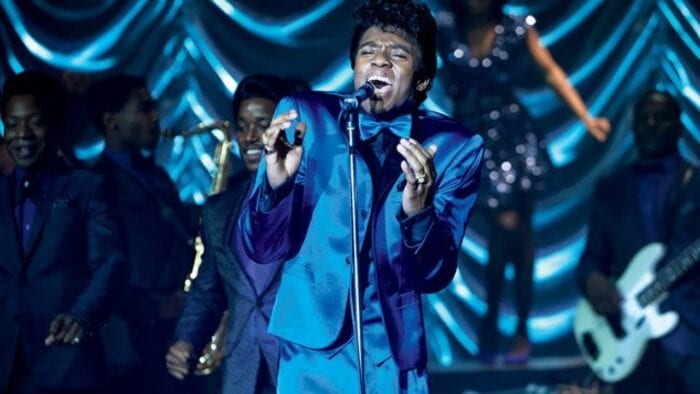 Get On Up tells the story of the late James Brown, #7 on Rolling Stones‘ list the 100 greatest artists.  He’s also known as “The Godfather of Soul,” “Mr. Please Please Please,” “The Hardest Working Man in Show Business,” “Mr. Dynamite,” “Soul Brother Number One,” and the “Minister of the New New Super Heavy.” Those colorful nicknames for James Brown become your time-stamped chapter titles to the film’s episodes of his fascinating life story. This bucks the usual formula dictated by a straight chronological order to both the narrative and its essential flashbacks. With twists and turns, some flashbacks are standalone moments and others are revisited when they serve a later piece of the story to connect the dots as to what makes James Brown an enigmatic legend. That narrative arrangement is a positive credit towards Tate Taylor and his screenwriting team of brothers Jez and John-Henry Butterworth. They knew a little bit about dancing with time after penning Edge of Tomorrow from the same year in 2014.

In true biography fashion, Get On Up spans the performer’s life from his childhood to his later years still selling out venues, but it dances around like the famous singer’s footwork. You can reference Wikipedia and learn James Brown’s Georgia whorehouse upbringing, juvenile prison time, gospel talent discovery, his idolizing of Little Richard, and his breakthrough gig as the lead of The Famous Flames before becoming a solo icon. His vices of substance abuse and history of violence are topics suited for more R-rated than PG-13 material, but the film leans towards the emotion of how those problems affected James and the people around him over the acts themselves. One thing the film does well is that it highlights the people that influenced James more than the vices and the history.

The “business” part of show business also gets a strong focus. This is an area where this is too much history to tell about James Brown and his range of recording success, but the film touches on enough to see the genius to both parts of show business. What the movie teases is the “business” part of holding success together through years of changes. It’s as much about the deals you make as the deals you don’t settle for. We see the artist striving to stay current and earning his “hardest working man in show business” moniker. Even though we don’t see all of the connected people that Brown influenced on his labels or works, we get a sense of the enormity of his presence.

Taylor’s The Help co-stars Viola Davis and Oscar winner Octavia Spencer play the tragic mother that disowned him and the stern brothel owner that raised him in his youth. Davis, in particular, puts forth excellent scenes. Dan Aykroyd gets a plum role as manager Ben Bart, his meatiest part in years. Singer Jill Scott plays Brown’s embattled wife, DeeDee. Chief among the influences on Brown as a man and as an artist is his long-time partner Bobby Byrd, played by then-newcomer Nelsan Ellis. He’s the stable presence that counters the lone wolf survivor that James Brown fancies himself to be. Ellis is superb in his first significant role. 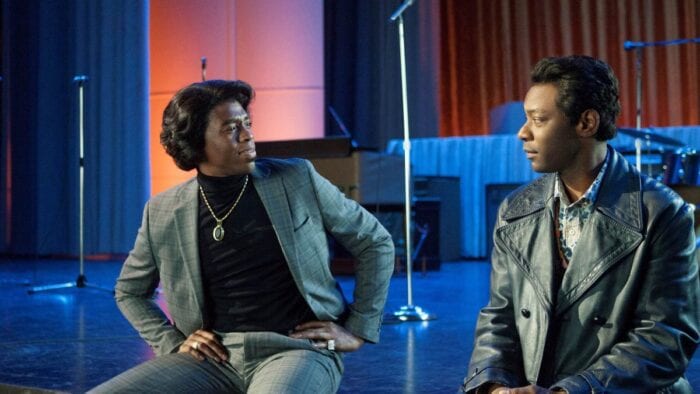 Get On Up could have gone many different directions with James Brown and his character flaws. His addictions and troubles with the law are well-documented but occupy only snippets of the story glaze in this film. If there is one trait that emerges the highest, it is the flaw of a person who says they need no one. James spent much of his life feeling like he needed to support and protect himself. He was a man that said he needed no one. James Brown emerged as a brand of his own artistry and knew full well that all of the people in his wake and tow were reliant on his success. For a long time, he missed the fact that he was equally dependent on their support and efforts as well, from his wife and broken family to his creative partners like Bobby Byrd.

After the “business” part and background family, the “show” part is easy to see with Brown’s career that spread hits across rock ‘n roll, pop, gospel, R&B, soul, and funk. His stage presence and power only exemplify that further. The man had an energy and sound; he called it the “groove,” that no one else could touch. James Brown is, quite clearly, a unique legend unlike any other. 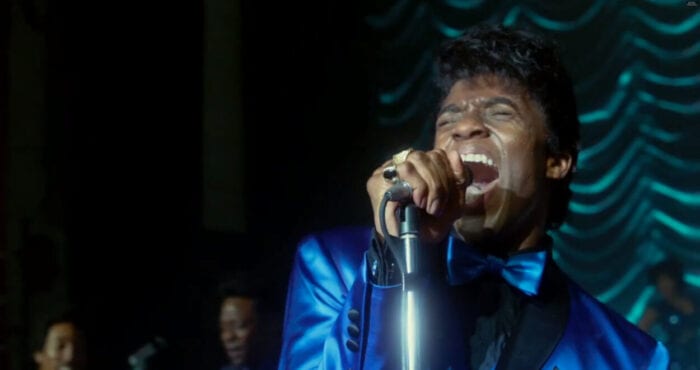 Chadwick Boseman is nothing short of phenomenal as the lead. With just three features to his credit at the time (including the memorable 42 from the year before where he played Jackie Robinson) and years before Black Panther, Boseman brought the right kind of unknown newness to this huge personality. He physically and emotionally invested himself into becoming James Brown in every sense possible, short of singing the role himself. There are nice touches where Brown breaks the fourth wall and speaks directly to the camera, an effect that is sometimes inappropriately misplaced in other films but used well here. The physical impersonation with the footwork and raspy voice alone is uncanny, but, more importantly, Boseman enabled that unifying absorption that was discussed earlier. You don’t see Boseman first and James Brown second. It’s all James Brown. He was even better here than he was in 42 and deserved Oscar consideration that year.

Get On Up, just like other biographical films, has its hills and slippery slopes to climb. All of the cliches about life and career problems that you would expect with an orphaned, jailed, womanizing, and drug-fueled celebrity are still present. You’ve seen them before, and sugarcoating is evident. Also, not all of those shrewd flashbacks work and length is always an issue for biopics. It’s impossible to fit everything interesting about a person’s life in two tidy hours, and it’s really hard not to go on and on too long. Get On Up overflows for a hefty and challenging 138 minutes. It is a flaw it cannot avoid, but cuts would take away depth.

After Boseman’s towering lead performance, the best thing about Get On Up that puts it over the top as an exceptional biographical film is the presence of Mick Jagger as one of the film’s producers. Jagger is a big James Brown proponent, and it shows (including a notable appearance in the pre-release featurette trailer), making this as much a passion project for the man’s music as his life. Some biopics of recording artists are too behind-the-scenes heavy and forget about the music we love. Ray and Walk the Line fall for that a little by comparison. Get On Up does not whatsoever. The incredibly detailed set pieces of musical performances fit seamlessly into the non-linear narrative and rival Broadway musicals in both number and entertainment value. Respect this film for the man at hand, but come out marveling his music and his energy.