Stature is something that can sell movie tickets. This was especially the case for the cinematic offerings of the 1990s. A picture could be a hit on headliners alone. Name-driven, mid-budget programmers were the studios’ bread and butter. Add a recognizable property, and you could watch the bank double. All of those ingredients were mise-en-place for 1995’s First Knight.

Sean Connery was an established legend continuing his senior surge. Richard Gere was an A-lister still riding the Pretty Woman wave. Julia Ormond was the dazzler coming off her mainstream breakthrough, Legends of the Fall, with Sabrina around the corner. Director Jerry Zucker was following up 1990’s double-Oscar-winning box-office champ, Ghost. Now, apply those forces and brands to a variant of the Arthurian legend with a plum summer box-office slot in a climate that drank up Robin Hood: Prince of Thieves four years earlier. Columbia Pictures confidently asked where to sign.

What did all that stature gain 25 years ago? The answer is more head tilts and indifference than raucous cheers, as evident from the 44% critical score on Rotten Tomatoes. First Knight landed as a box-office dud that opened third behind the saucy genre flick Species and the patriotic juggernaut Apollo 13 a week after Independence Day, and barely ahead of a month-old Pocahontas. Domestically, it would only earn $37 million against a $75 million budget. Luckily, an infusion of $90 million of international sales put it in the black, and enough easygoing fans (like this author) have kept it around since as a steady earner on home media.

Borrowing the broadest of brush strokes from Chrétien de Troyes’ poetic French treatment that many credit with originating the Lancelot character, First Knight places the center of its hero worship on Richard Gere’s gorgeous vagabond. The long-locked soldier for hire meanders from village to village, impressing the locals with his extreme skill and showmanship with a sword. Jaded and faithless, the grim Lancelot still exudes a valiance to help those in need.

As a passerby, Lancelot comes to the aid in rescuing a noble maiden (Ormond) attacked in the forest by the armed forces of the local tyrant Malagant, played byChariots of Fire star Ben Cross, thundering with evil-bastard gravitas and intensity every second he’s on screen. That brave yet demure woman turns out to be Guinevere, the Lady of Leonesse and the betrothed fiancee of King Arthur of Camelot (Connery, the former Green Knight in Sword of the Valiant: The Legend of Sir Gawain and the Green Knight, opposite Trevor Howard’s King Arthur). When presented with any reward, his only request is a kiss as the orchestral strings melodically massage the moment to a peak. The embrace is brief, but an admitted mistake. A promise is made between the strangers to never share a kiss again unless the lady asks. The mutual attraction gives way to prudence, and the two go their separate ways.

In this manner, First Knight crafts both its love triangle—and its battles, for that matter—with an uncommon chasteness. Longing is the chief feeling in play. At Zucker’s insistence, the content stayed very PG-13. Unlike in its more celebrated 1995 genre competitors Braveheart and Rob Roy, the heavy bloodshed and torrid homewrecking are minimized for wider audiences and make for a more gallant take than John Boorman’s escapade of excesses in Excalibur from 1981. Plenty of viewers found First Knight too placid for modern tastes. Others saw the temperance as an inspiring and palatable draw fitting of the golden era of Hollywood. 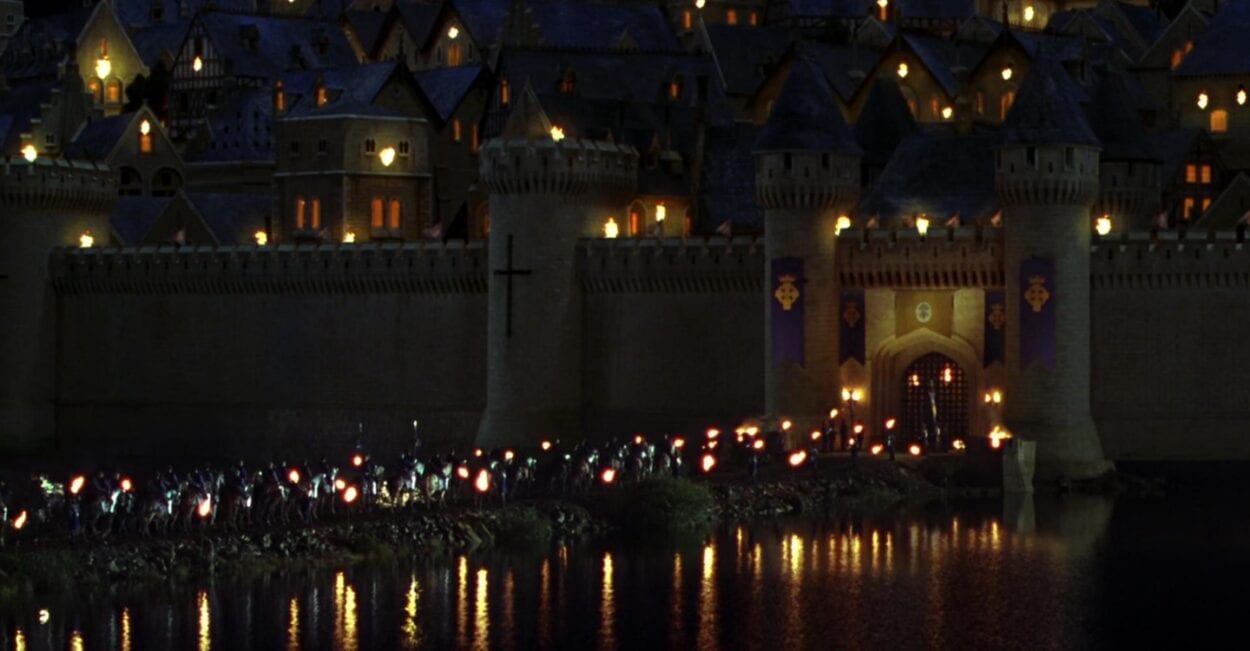 Paths cross again with Lancelot’s arrival in the grand city of Camelot, where he sees Guinevere’s stately place beside the popular monarch. When the prize for successfully navigating a deadly mechanized gauntlet is a kiss from the future queen, Lancelot sees his chance and dazzles the crowd with a victory. Lancelot’s bravery, talent, and stupidity (great line-drop from Connery) catch the eye of Arthur, who introduces his new guest to his progressive community’s successes and the bold democratic ideals of the city he created.

In quick time, against the looming threat of Malagant’s forces creeping closer to Camelot, Lancelot continues to show his valor and resourcefulness. He climbs the knightly ranks of respect with Arthur, with his background gaze ever fixed on Guinevere. The fate of a fall for this tryst is inevitable, even for a sanitized blockbuster like First Knight. 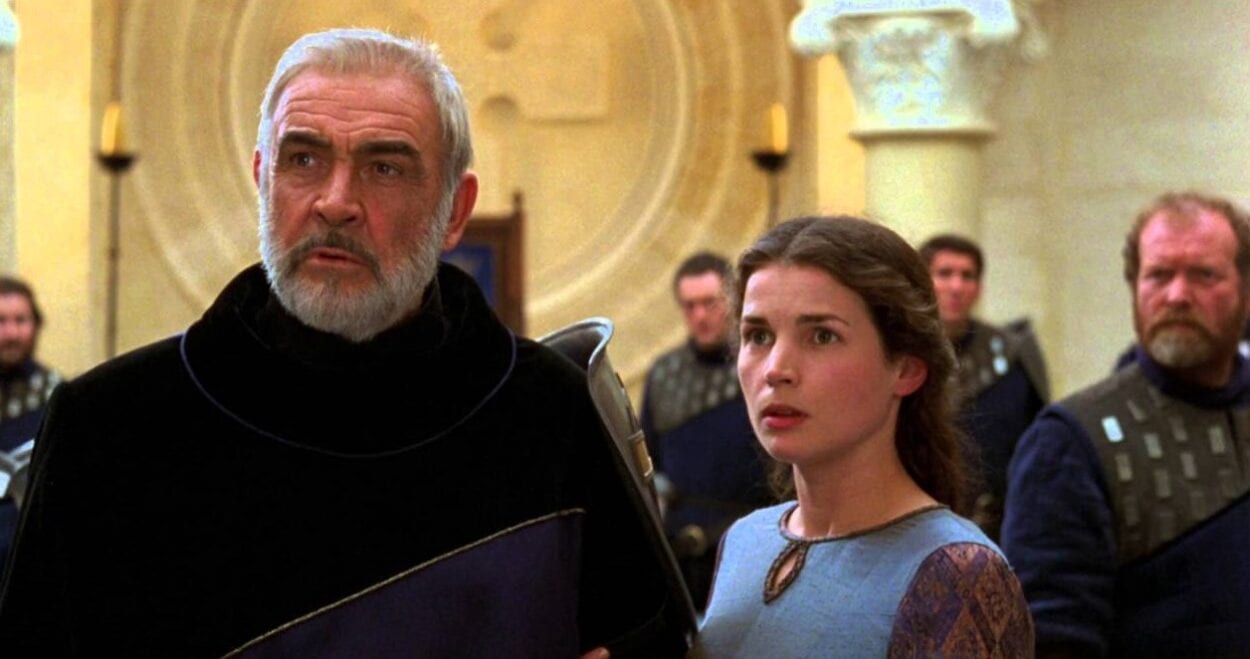 The casting choices are generally the first knock against this movie. While de Troyes’s version of the tale contained a substantial age difference between Arthur and Guinevere, opening the door for a younger man, Richard Gere, for many, wasn’t young enough. The 35-year age difference between Sean Connery and Julia Ormand is one thing. The equally unconvincing 19-year difference between her and Richard Gere is another. Even if they shaved six more years to get down to 13 with the originally attached Mel Gibson for Lancelot (he wisely chose Braveheart), that’s not much better.

Sure, Connery exudes the worthy stature and enough low-key sex appeal to pop corsets as a senior king. However, in much the same way, so does Gere, if you take that brunette mop off his head and let his silver fox hunt. It was awkward to choose between May-December and May-September instead of a hot and virile May-May option. Imagine (an albeit non-British) Gere as Arthur and anyone on this list who would be the same age as Ormond. I’m looking at you, future King Arthur himself, Clive Owen.

Screenwriter William Nicholson, a two-time Oscar nominee (once before this with Shadowlands and once after with Gladiator), followed the light and playful story ideas of Lorne Cameron and David Hoselton (Brother Bear, Over the Hedge) to craft a crowdpleaser. The romance was put front-and-center, and any of the magical elements of the myth were purposely removed. The home media editions of First Knight contain a feature-length Authurian commentary to toss in a little parallel education, but don’t bother if you’re a purist. You’ll only hear fact-checking proof of your respectful disappointment.

Instead, the themes of First Knight surround multiple layers of stately and chivalrous obligation. Duty and honor get the glory amid tough talk against versus ethics. Clothed in their regalia, Connery and Ormond do their best in their portrayals to push away the “marriage of convenience” labels. With lovely prose, they speak of loving king and country with body, heart, and soul. The Untouchables Oscar winner earned the lion’s share of great lines (“Marry the king and love the man,”; “Your will chooses me, your heart chooses him,”; and the shared mantra of “brother to brother, yours in life and death.”) Gere’s natural charm comes through no matter the dimestore-novel cheese as well. It’s all in the eyes for this trio. Connery sparkles from Ormond’s radiance, and Gere’s kindness inspires them both. The longing may have its restraints and limits, but the warmth is there from the eclectic director who made Ghost with the same hands that made Top Secret! and Airplane!

What polishes all of the mild melodrama to a shine is the soaring production value of First Knight in a predominantly pre-CGI era eschewing green-screen shortcuts. Two key people in Zucker’s inner circle were a pair of legends with seven Oscars between them: editor/sound specialist Walter Murch (The English Patient, Apocalypse Now), and David Lean’s go-to production designer, John Box (in what would be his final film). Between the rugged forests and slate mines of Wales and the expansive Pinewood Studio constructions, Box’s work creates towering scope. Murch tightly keeps the popcorn elements from going stale from its tea-time English shoot. 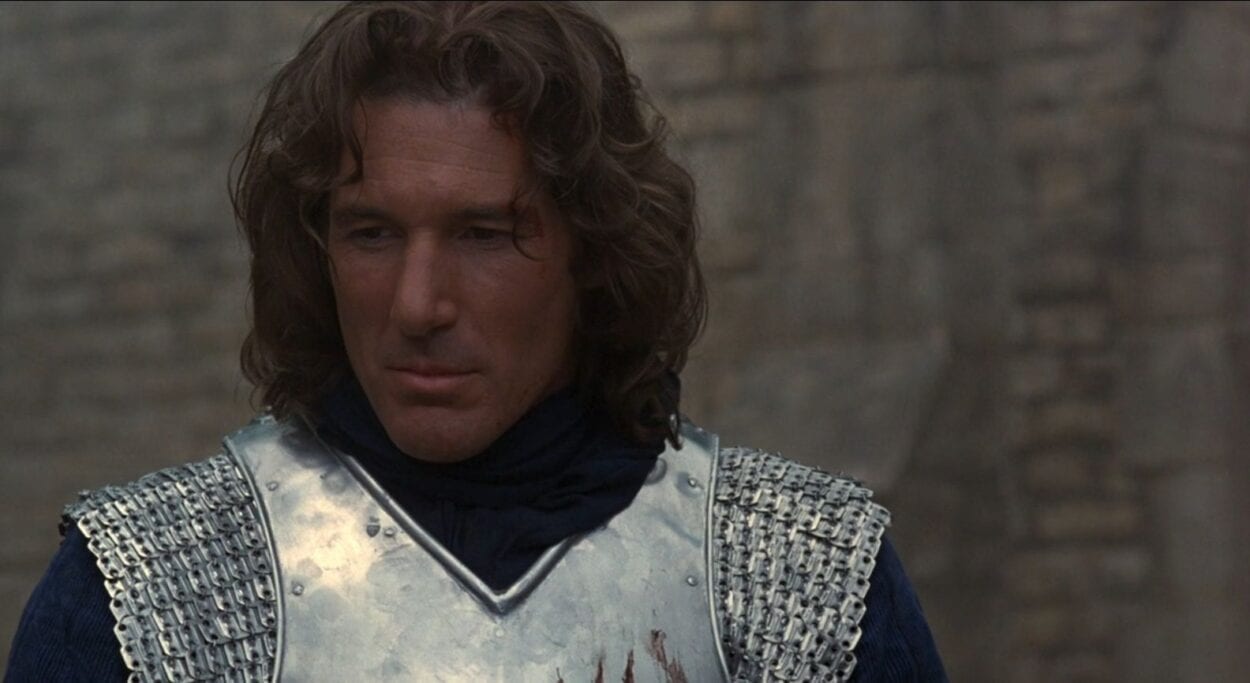 The artistry goes deeper, though, especially with the costumes. The bold blues and highly shined silvers of Italian costume designer Nana Cecchi (Ladyhawke) pop in the daylight and glint gorgeously at night when captured at any chosen speed by cinematographer Adam Greenberg (Terminator 2: Judgment Day). On the director’s commentary, Zucker says that his favorite shot of the whole movie is the wide shot of Arthur’s storming knights on horseback in the dark with nothing but their armored reflections capturing light. It’s a dynamite shot amid a studly battle.

Speaking of the heights of action, the stuntwork coordinated by Mission: Impossible’s Greg Powell is rock solid. The performers themselves, especially Gere, trained hard to ensure very little double work or light special effects (completed by George Gibbs of Who Framed Roger Rabbit?) were needed. Famed swordmaster and trainer Bob Anderson (Star Wars and Lord of the Rings trilogies) and horse master Steve Dent (Gladiator) made everyone look the part for every thrilling, heroic shot.

First Knight’s boldest ingredient is ultimately Jerry Goldsmith’s magnificent musical score. The master of adventure brass-and-string incorporated superb themes for heroes, villains, kingdoms, and lovers with distinct variations and range. So often during the film, his score leads the proceedings and carries all of the picture’s pomp and sweep. Fortuitously, Goldsmith was a last-minute substitute when Zucker’s Ghost composer Maurice Jarre couldn’t make a deadline. Goldsmith recorded this with the Los Angeles Master Chorale in a mere three-and-a-half days.

As fluffy and forgotten as First Knight was considered by its first-run audiences, its entertainment value lives on through its epic scope and approachable theatricality. The social media/TV buzz site WatchMojo lists First Knight as its fifth-best movie love triangle, seventh-best movie king, and eighth-best overall medieval movie. Self-deprecating on the commentary, Jerry Zucker apologizes in the first five minutes of the movie for anyone who took this movie seriously. The deeper, missing myths were not the point. He and Nicholson were going for pure fantasy and making new rules as they went along. With that low a bar, First Knight succeeded just fine.