Well, Season 2 of The Umbrella Academy certainly didn’t disappoint. So much transpired, especially towards the end of the series, that’s it’s hard to decide where to begin discussing it. Events were kicked up a notch and that’s saying something considering what unfolded in the first season. As each member of the family reunited with their siblings, they were forced to drop the lives they’d made for themselves in early ‘60s Dallas and help find a way to prevent the apocalypse… again. This was much easier for some, such as Diego and Luther, but not for the others. It was especially hard for Vanya, which is ironic considering hers was the least complicated life when we found her.

Not doing anything to debunk the cliché of nannies breaking up marriages, Vanya began an affair with Sissy, the woman of the house. Although, her husband is also the typical, misogynistic drunk of the era and it’s clear that all the spark had gone out of their relationship years ago. When Five finds a way for the team to get back to their own time, it’s Vanya who’s the only one who refuses to part with her new lover and her mentally-challenged son Harlan. Whilst attempting to bring them with her to the future, she’s captured and tortured by the FBI, leading to her destroying the building she’s in and causing a distraction that saves JFK’s life.

You’d think this is would be a good thing, but when the Russkies are blamed, it sets off a chain of events that ends with nuclear Armageddon. This raises questions about whether The Umbrella Academy are cursed with the fate of bringing about the apocalypse and whether Vanya is destined to be the cause of it. This is such an amusing paradox, as the team was assembled to prevent such a catastrophe by Sir Reginald, yet the cause of it is within the family and triggered by his brutal upbringing of them. This oxymoron also tackles a question that has been present in the lore of the genre for many years: whether superheroes cause more problems than they solve.

It’s an accusation that Batman faces often, as he has the most vast and colourful rogues gallery of any hero in history. He has such an extreme image and methods that over the course of his career, some have suggested that he inspires villains to rise to his level. It’s a similar situation with Superman and Lex Luthor—the latter was an upstanding philanthropist until the former came along and made him feel inferior. This put Lex on an obsessive mission to try and best him in any way possible. It also came up recently in the Captain America: Civil War movie, where the wise and logical Vision stated that having a team as formidable as the Avengers invites challenge…but I digress.

Alison has a similar situation to Vanya with her fairly new husband. After things go sideways at an equal rights protest, he sees her use her power, which she’d been trying her utmost not to do. Eventually this leads to her telling him the whole truth about who she is and where she comes from. He takes it well and when it’s time for her to leave, she also asks him to come with her, but he says the fight for equality for him is right there and then. Klaus also tries to come clean with his cult about being a fraud to hilarious effect, as they’re so far gone that whatever he says they convert into an insightful parable of some kind a la Fight Club.

Out of the heated debates between him and the spirit of Ben about how to handle this, the latter discovers that he can possess Klaus’ body. This leads to a great sequence where we see him able to touch and feel things for the first time since his death in childhood. History repeats itself when it’s Ben, with this new ability via Klaus, that saves the day once again. However, this time he uses brain instead of brawn and reaches Vanya on a spiritual level. He calms her, comforts her and sacrifices his spirit form in the process, finally going into the light that he has been afraid to enter for all these years. It’s a very touching moment to say the least. 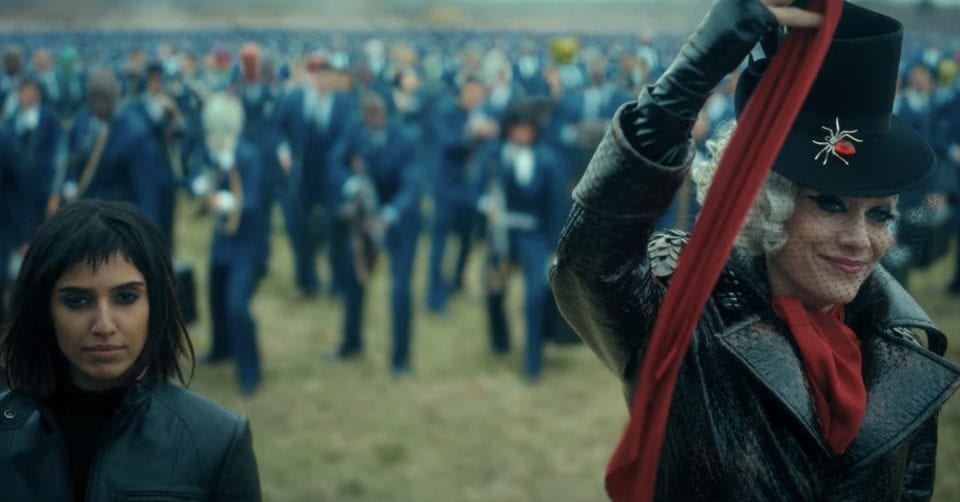 The season ends with a big battle between The Umbrella Academy and The Commission that police the timeline. They’re such a threat to The Handler, who has seized control over the latter, and she becomes the big bad of the season. As in the first series, she’s gunned down by one of her own assassins, whom she foolishly tried to manipulate (and he wasn’t too happy about it). What was most interesting about this final confrontation though was the reveal that her protégé and Diego’s love interest, Lila, has powers. She’s able to reflect/mimic all of the team’s abilities when they’re thrown at her.

The question of what happened to all the other super-powered babies that were mysteriously conceived and born on that same, fateful day has lingered since the opening sequence of the very first episode. Lila is the first answer to this but by no means the last. When The Umbrella Academy finally return to their own time, they find that they’ve been replaced by Sir Reginald with The Sparrow Academy, who are led by a different version of Ben. We only see this new team in silhouette and they act as a great cliffhanger to look forward to seeing properly in the third season.

There are so many things that this show gets right. The first season had a great soundtrack with a lot of British artists such as Radiohead, Queen, David Gray, Noel Gallagher, Paloma Faith and Toploader. In the second, the tone is less sombre and due to the different time period we got a mixture of old and new, lighter tracks from the likes of Frank Sinatra, Kiss, The Stranglers, Public Image Ltd and DJ Shadow. The general look of the show is so appealing, with its fantastic costumes, period set design and over-saturated colour tones. They all add to a brilliant comic book aesthetic.

The Umbrella Academy is also very well cast, with the overall level of performances being very strong. Robert Sheehan as Klaus is particularly enthralling. I’ve been a fan of his since his days in Misfits, a British drama/comedy about anti-social teens with powers on a rough estate on the outskirts of London. I had the pleasure of meeting him at a gig last summer and he was just as charming in real life. Coincidentally, he was flying to Canada the very next day to start filming this season. His character has developed so much in a genuine way, with his wry humour intact and without becoming a caricature, something a character like his is always in danger of.

Aidan Gallagher is so convincing as Five, an old man trapped in a boy’s body. His fight scenes are particularly fun, as he’s a seasoned killer and has no inhibitions, which sits in stark contrast with his appearance. Tom Hooper really ran with the humorous moments he was given in this season. We saw hints of it in the first but I feel like he’s really settled into the character of Luther now. He adds another layer to the strongman archetype of this genre. Justin H. Min has also really evolved in the character of Ben from being Klaus’ own Jiminy Cricket to being an alluring character in his own right. 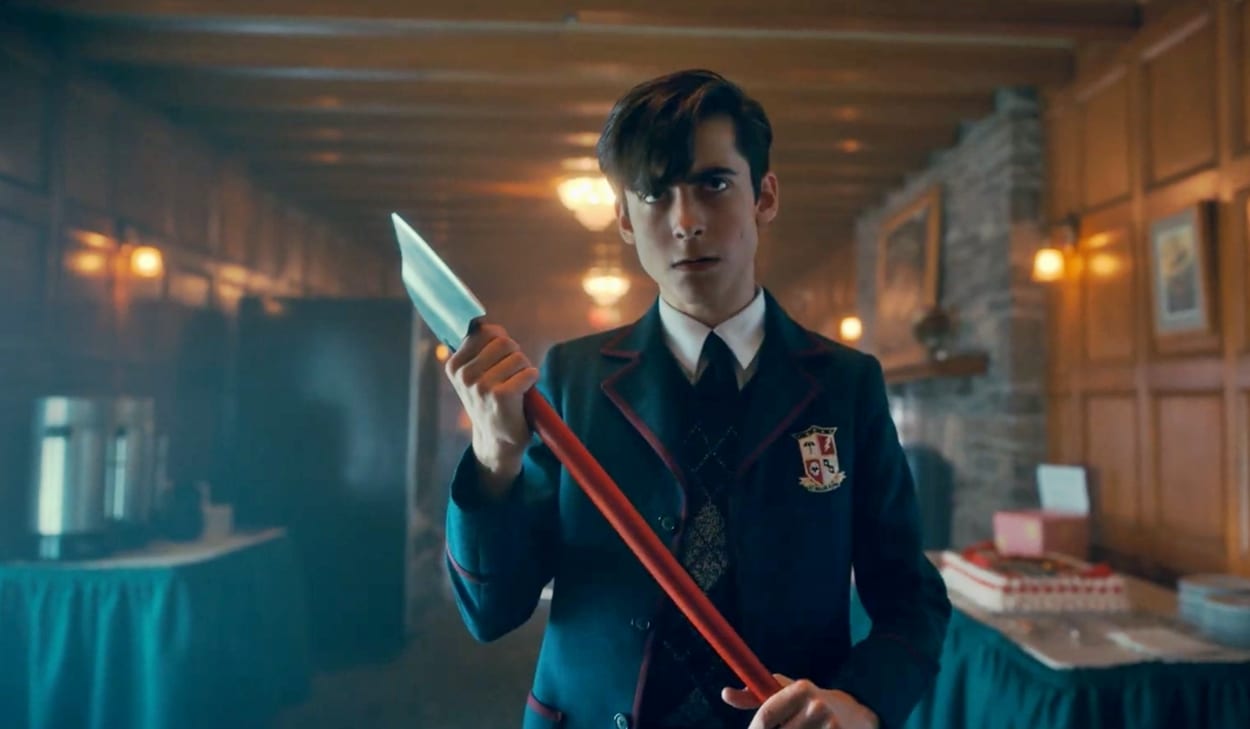 I was glad to see Colm Feore back as Sir Reginald as well, despite the different time and place. The scene where he has a sit down with the family is one of the most entertaining set pieces of the series. Through him we also get to see the origins of Mom (Grace), who was modeled after his former partner, and Pogo, who was their test subject they shot into space. If I had one request for what I want to see more of in the next season, it’s the team in action together. We got a taste of it in the opening sequence of this season and I was a little disappointed that we didn’t get to see the team really let loose on all the agents from The Commission when they appeared en masse in the climax.

With the introduction of The Sparrow Academy, I think they could be the perfect instigators for these kinds of battles that when done right can be like superhero versions of team sports. Overall though, The Umbrella Academy is a huge step in the right direction for the genre. Along with the other groundbreaking superhero shows from last year such as Watchmen and The Boys, it’s showing how less famous comics, in the right hands, can have just as much of an impact, if not more so, than the big boys. Netflix, after losing the Marvel properties they handled well, have made all the right moves in embracing these alternative heroes. I hope they continue to mine the vast history of indie comics and dig up more gems such as these. 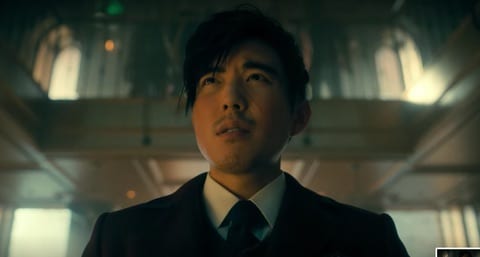