For many fans, there are two types of Star Trek: Trek Prime, which consists of everything from The Original Series to Enterprise, and Nu-Trek, which consists of the Kelvin timeline (or the J.J. Abrams “JJ-verse” movies) and any new series that’s come out since Trek Prime’s demise (mainly Star Trek Discovery and Star Trek: Picard). I don’t know all the ins-and-outs on a personal level of how the fandom treats each other but I can confirm there is a division.

And I find myself aligning with the Trek Prime universe when I am forced to choose sides. I generally despise the “JJ-verse” Trek films as they are the anti-thesis of what Trek is all about, promoting action and violence over science, discovery, and ethics. I admit to not having watched Discovery but part of my aversion to watching it is how everything looks gritty and “real”. Plus numerous clips of gigantic space battles from that show have cropped up, which has turned me off to the idea of the show, especially since it is associating itself with the name Star Trek. I gave up on Picard as it felt like Patrick Stewart and the showrunners were creating a different universe altogether, one in which Picard himself is an imposter and, once again, everything is gritty, realistic, and dark. Nu-Trek just isn’t for me, but I don’t begrudge those who want to embrace it or, better yet, become fans of Trek overall as a result of being exposed to it.

So it comes as a confusing surprise during this Nu-Trek era, that Star Trek, the brand, is releasing a nostalgia-heavy comedy series…an animated one to boot…that plays with the conventions of Trek Prime by replicating its look and feel, right down to the font of the credits, and bundling it in promos with the new season of Discovery. This might not be your dad’s Star Trek but it certainly isn’t anyone else’s at the moment either: this is a new animal. It is Star Trek: Lower Decks.

Set in 2380, one year after Star Trek: Nemesis, Lower Decks is purposefully using vibes that represent The Next Generation, focusing on an Enterprise-like ship, similar yet different Starfleet uniforms, and comparable set design. Everything from the credits on the screen to the sound effects used is maximized to appeal to that fanbase’s nostalgia need. And the fact that it is animated only amplifies the nostalgia factor, as going back to recreate this atmosphere in a live-action environment would seem impossible at worst and pandering at best. Animation gives it the license to pay homage to what came before all while irreverently sending it up.

The focus is not on the “perfect” bridge crew as TOS or TNG would be, but instead on a group of lowly ensigns who, fittingly, live and work on the lower decks of the Starship Cerritos. The ersatz leader of this show is Ensign Boimler (Jack Quaid), a by-the-book command officer who wants to be just like the Captain of his ship and every other legendary Captain in Starfleet’s history. His best friend is the opposite of that. Ensign Mariner (Tawny Newsome) is a rule-breaking partier who thinks the legends of Starfleet are full of themselves and one big joke. She is constantly a thorn in Boimler’s side though the two are, of course, the best of friends in typical opposites-attract fashion.

One of their lower deck compatriots is the dorky, and recently-turned-Cyborg, Ensign Rutherford (Eugene Cordero) who, in the first episode, scores a date with someone way outside of his league. Luckily, his new cyborg implants can take away (or heighten) his fears or, when logic demands it, institute Vulcan subroutines. The three become, for better or worse, mentors for new assignee Ensign Tendi (Noel Wells), a green-skinned (Orion?) medical rookie who is so excited to join the Starfleet tradition that she is in wonder of everything to the annoyance of most.

Lower Decks packs a lot of episode into its series premiere, introducing us to our four main characters, showing off the periphery characters who in other series would be the leads, and managing roughly four plots at once.

The first plot involves the ship’s Captain asking Boimler to spy on Mariner and report any breakage of rules, no matter how severe or minor. The second involves Boimler and Mariner, now at odds with each other, battling a wicked spider on a planet’s surface. The third involves one of the senior officers receiving a bug bite during a “second” contact mission and spreading a “rage” disease all over the ship in the midst of the fourth plot, Ensign Rutherford’s date. All in 26 minutes! 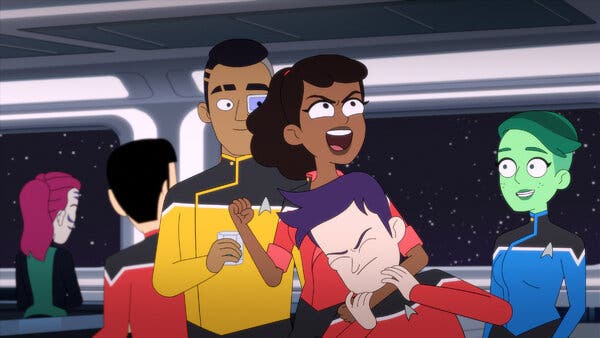 Created by Mike McMahan, the executive producer and co-writer on Rick and Morty, one can tell this is a love note to Star Trek and Star Trek: The Next Generation specifically. There are an endless amount of in-jokes and easter eggs packed in the opening episode and the humor is more nerd-centric and witty than outlandish or scatological. The pacing is well done and while not every joke in the premiere lands as smoothly as others, this is a funny show and one I was wishing had released all the episodes at once so I could devour the entire season.

Is there any other way to recommend a comedy show? It was funny and I wanted more. That is a sign of success to me. So while I may still have Discovery on the backburner and I might never finish Picard, Lower Decks at least has the decency to make me smile at Star Trek again. Who would have thought in this era of Trek we live in, we could do that?