For those not in the know, the original Risk of Rain was a sleeper hit that blended elements of Metroidvanias with rogue-likes and cooperative action games. If I’m not mistaken, it started off as some kind of school project before launching into indie royalty thanks to good word of mouth. For me, it ranks high in my list of favorite indie titles. So when Hopoo Games released the sequel, which is now a fully 3D action game that retains many of the same elements of the original, my friends and I eagerly dove in to see how it played. The answer was: pretty well. It had a lot of rough edges though, including a severe lack of endgame. But that’s all changed now that the game has officially received its 1.0 update and exited Early Access.

Kind of like how Evil Dead 2 is more of a retelling of the original movie for its first act, Risk of Rain 2 is very much a reiteration on the first game’s premise and plot, which was surprisingly involved if you took the time to read its lore entries. All of the characters you play as crash land on a hostile alien planet when their ship is blown out of the sky and they must find teleporters in every level to bring them closer to the alien menace that won’t let them leave. In a surprisingly thoughtful marriage of gameplay and story, the treasure chests and money caches you find throughout the levels are actually items that fell from the sky when your spaceship crashed.

The characters you can play as are all survivors of the wreckage, and each one is distinct enough from the other to make them all feel worthwhile. Initially, you only have access to the Commando, a dude with two pistols who focuses on dodging and steady DPS (Damage Per Second). Eventually though, you unlock up to 9 more survivors by completing various in-game challenges, which lends the game the replayability that all rogue-likes live and die by. My personal favorites are the Huntress, who can sprint while firing her bow and can teleport around the arena, and the Merc, a melee-focused class who can perform all kinds of crazy acrobatic moves with his sword. But all of the characters are fun to play as since each one is distinct from the other. 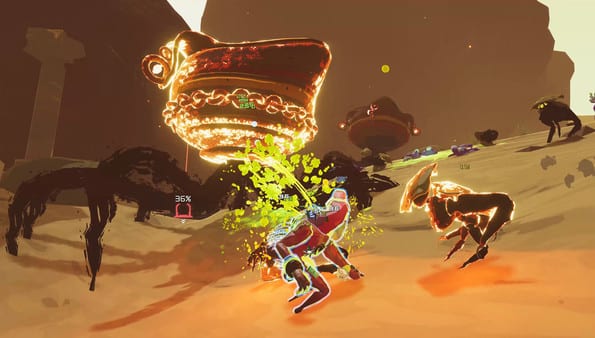 Like in the first game, the levels aren’t quite randomly generated. Instead, you progress linearly through certain biomes, and the random element comes from the fact that each biome can have a few different layouts and specific items scattered around. It isn’t the total unpredictability of something like The Binding of Isaac, but it does keep things fresh if you choose to loop back around to the beginning of the levels (more on this in a bit). Essentially, you need to explore each level and gather items that can give you different benefits (charmingly enough, in this game items also alter your appearance, which means—like in The Binding of Isaac—your character will be unrecognizable, and it’s often very funny and keeps your character visually fresh) before finding the teleporter. Upon activating the teleporter, you must fight a giant, screen-filling boss and fight off hordes of enemies until the teleporter has completely charged and you can move on.

The big gimmick with this series is that the longer you play, the more powerful enemies become. There’s a timer in the top right corner that has difficulty settings such as “Very Hard,” “Impossible,” “I see you,” and eventually even “HAHAHAHAHAHAHAHA” into infinity. Eventually, elite mobs will start spawning, and if you’re not careful, you’ll get ripped apart, and sometimes bosses will randomly spawn too. This is offset by the fact that items become more and more frequent, and higher-rarity upgrades become more common, too. Typically, you have to play through about six levels before choosing to go to the final level, or you can loop back around to the beginning with all your items and levels intact to get even more upgrades. If you find an Artifact (items that can add certain modifications to the game) called Command—which lets you choose your items instead of having them be random—you can make some insanely powerful character builds once you learn what each item does. For instance, as the Merc, I would stack items that upped my critical hit chance, and also stack items that would heal on criticals and also make my attack faster every time a critical attack lands. I became a movie level badass, capable of slaughtering almost anything in just a swing or two of my sword.

All of this is fun enough, but the game is at its best when you play with others. You and up to three friends can take the game on together, and it’s an absolute blast. Enemy hordes grow and get tougher the more characters you have, but if you spread out item allocation, you’ll all be absolute monsters on the battlefield. I had one run with a friend where two uber-tough versions of a boss appeared at the Teleporter, and they were eliminated in the span of three seconds because of our collective damage. It was hilarious and empowering. 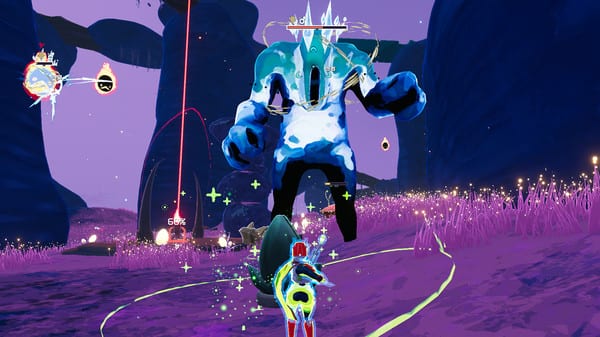 But friends can also help stymie the difficulty, which can get quite high later on, even if you’re playing on Drizzle (there’s an overall difficulty setting that determines enemy damage and how fast the in-game difficulty slider fills). Sometimes this feels worthwhile, such as with the various secret areas that help you unlock new characters. Oftentimes, these areas offer tough secret bosses that are satisfying to overcome. Other times, though, it can be somewhat frustrating, mainly with the endgame. The final level requires a lot of mobility and platforming abilities that are not innate in every character. Sure, the Merc can fly through the air if you know what you’re doing, but the Engineer is a character built around others doing the work for him by deploying things like turrets. He isn’t mobile, and if you’re playing as him, you need to make sure you have some items that up his speed and give him extra jumps in order to get to the final boss.

The final boss is also a big mixed bag for me. Without giving away too much, it’s a monster that is already stupidly powerful, able to kill you in just a few hits. There are multiple phases to this monster, too, and in the final one, all of your items are taken away from you and used by this creature. You can win them back by inflicting damage, but it still feels like it actively punishes you for just playing the game. The whole point is becoming more powerful, so the fact that it takes away all that power is rather frustrating. I’m in the minority in my friend group, as they feel it offers a unique challenge and makes you feel like the monsters you’ve been slaughtering all this time. I would agree if the narrative was stronger, but it’s still somewhat bare bones despite the extensive lore available for the player to find, and comes across as too punishing.

Still, the fact that Risk of Rain 2 feels this complete after coming out of Early Access is exciting and promises a bright future for this game/franchise. Right now, there are still several empty slots on the character select screen, meaning that there might be even more added as time goes on. As it is, though, Risk of Rain 2 is a yet another top notch rogue like from one of indie gaming’s most underappreciated developers that’s even more fun to play with friends.

Risk of Rain 2 is now available on Steam, Xbox One, Playstation 4, and Nintendo Switch.