When it comes to crime families in movies, any contenders and pretenders that want to be taken seriously are kissing the Corleone ring of The Godfather trilogy. That’s not happening with the Cutler clan in Adam Smith’s 2016 festival darling Trespass Against Us. As a mishmash of trailer park trash puffing their chests to operate with supposed principles, they occupy the polar opposite end of the glamorous spectrum of organized crime. Call them an “Irish fugazi,” if you will, complete with their own membership rings and cracks in the hierarchy.

Michael Fassbender, the man you will watch in anything because it’s Michael Fassbender, stars as Chad Cutler, the daring wheelman of a family gang of small-time, smash-and-grab crooks. For years, he’s been orchestrating and performing jobs for his father, Colby Cutler. Brendan Gleeson, another sure thing of mighty screen presence, plays the patriarch of this podunk rabble of circled RVs and camping hanger-ons, including the twitchy screw-loose Gordon, played by Fassbender’s Macbeth adversary and Mission: Impossible- Rogue Nation villain Sean Harris). 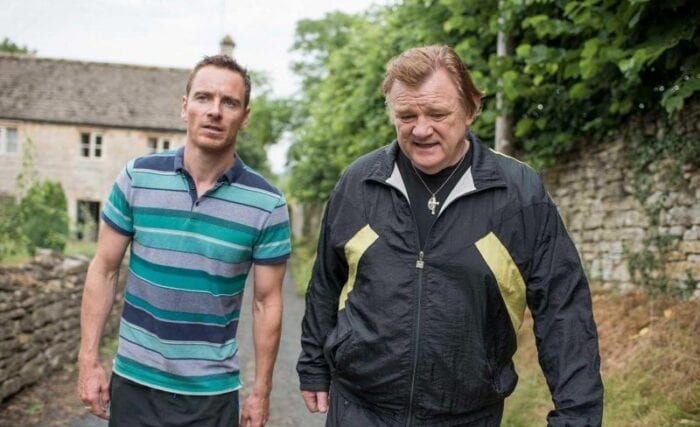 Chad has reached the stress point where he has had enough the dead-end lifestyle and is tired of the constant police harassment, characterized primarily by Rory Kinnear’s P.C. Lovage. He is a married father of two pre-teen kids and has begun to see the bad influence both himself and his extended family have made on his children, particularly his impressionable son Tyson (Georgie Smith). Chad is making plans with his wife Kelly (Lyndsay Marshal of Hereafter) to find the courage and means to remove themselves from the toxic situation. The problem is saying no to dad Colby, who will play the guilt card of family abandonment in one hand and twist the knife of dominance in the other.

Trespass Against Us is the feature film debut of TV director Adam Smith (Doctor Who) and he has surrounded himself with gifted talent. Michael Fassbender is a compelling lead playing a father with his own daddy issues. As always, he is fascinating to watch, a calculated actor constantly in control of the way he lets himself or his character unhinge. Brendan Gleeson matches his stride as the morally corrupt and unpredictable leader pulling the strings.

If there is a wasted actor in the ensemble, it’s Sean Harris, who has proven loudly elsewhere that he can do more than play the filthy team imbecile. More menace and threat can be granted and offered from a presence of Harris’s caliber. His angles go nowhere and, sometimes, so does the whole film as it teeters between taut crime thriller and dysfunctional family drama. It is the tale of two tones for an uneven picture.

On the job, Trespass Against Us really moves, sped along by outstanding stunt work from coordinator Gareth Milne (Skyfall, The Program) and his team. The heist and ensuing pursuit scenes, shot by emerging cinematographer Eduard Grau (The Gift, A Single Man, The Way Back), are impressive for a film of this size. Smith must have called in a favor to bring in The Chemical Brothers, one of his previous documentary subjects, for a buzzing musical score. It’s a welcome and daring tone for this type of film.

On the lam, the film too often grinds its gears and dulls its edgy tone. The turn-over-a-new-leaf elements of parental challenges lack engagement and come up empty. By the time Kelly and Chad go in for a trainwreck parent-teacher conference, you want off the hook too. Pissing and moaning about the trailer park life, hazing each other, and talking big promises over cigarettes and profanity-laced diatribes, the film can be as lazy as its criminals between gigs. If you stick with it, stay for Fassbender and the spurts of tantalizing criminal thrills.

Just as with many organized crime movies, the lesson is too easy. Alas, the “don’t be criminal” cautionary tale gets a rustic and international twist in Trespass Against Us. Loyal 25YL readers for this new “Organised Crime” series have been told solidly that these folks are f–k ups. No grains of salt needed. 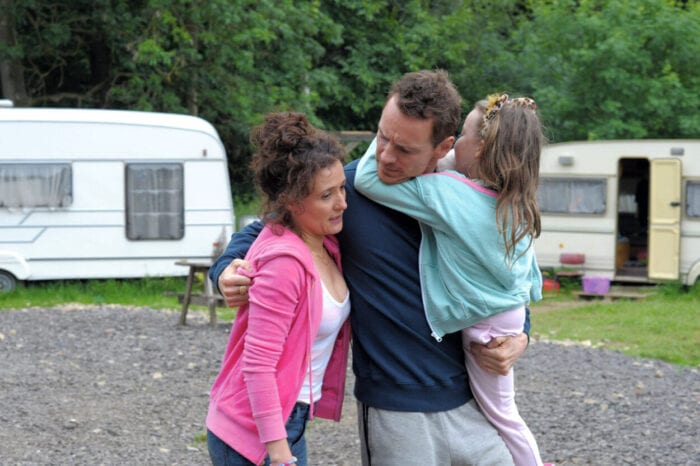 If Chad really wants to raise his kids to have a chance at not turning into him, he should have gone straight years ago. Stand up to your leader. Quit while you are ahead. He’s not the first or the last movie mark to miss those obvious decisions. Getting arrested makes you an absentee and deadbeat father, exactly what you don’t want to be, in seconds.

Beyond the criminal behavior, family is the core. What you’re watching here in Adam Smith’s film a collection of crossroads moments written with a saga in mind from then-first-time screenwriter Alastair Siddons (Tomb Raider). Trespass Against Us breathes and seethes the emotional combat between fathers and sons.

The turbulence spans the chances of a son trying to stand up to his father, do right for his own son, and an older father who still seeks to assert his authority and control. Chad is the way he is because of Colby’s manipulation and, successful or not, Tyson has already seen too much and started down the wrong path thanks to both of them. No one is getting cured easily. Daddy issues only beget more daddy issues.