You know, I don’t have a cleaner or nicer way of making this starting point. Criminals are f**k-ups, plain and simple. If they were smart, they would do something else for a living. If they were successful, they would be somewhere else other than dirty streets, dive bars, and s**thole homes. If they were wise, they would keep better friends. I’ll grant that it takes a different kind of savvy, circumstance, heart, skill, loyalty, and mindset to be a criminal. Like any other group, they are their own special breed. We like to think that they are noble people pushed to doing bad things to redeem themselves. You’re giving them too much credit.

Even in the greatest and coolest crime or mob movies, from charmers like Jack Foley in Out of Sight all the way up the ladder to the powerful Corleone family in The Godfather trilogy, you’re still watching f**k-ups. Movies can romanticize them all they want with noble codes, anti-hero character traits, and Robin Hood ideals. They’re still f**k-ups.

Killing Them Softly, the 2012 film from writer-director Andrew Dominik and starring the studly, newly gilded Academy Award winner Brad Pitt, internalizes the subject of criminal f**k-ups and puts them on display for us to enjoy. With a sharp and brutal edge of discourse and humor, Killing Them Softly is a crime film that trades action for conversation. Fashioned a little bit like a chatterbox Quentin Tarantino crime film like Reservoir Dogs or Pulp Fiction, Dominik’s film keeps its course when showcasing the criminal lifestyle being portrayed. It embraces the despairing flaws that drives criminal behaviour and leaves most of the fake coolness at the door.

As we enter our story, set during the fall of 2008 in New Orleans, the window dressing of a mob movie is still present in Killing Them Softly. Shot by Lion cinematographer Grieg Fraser, the late model cars, slicked back hair, ugly suits without ties, derogatory Italian terminology, leather jackets, hued sunglasses, and a constant cloud of exhaled cigarette smoke are everywhere to be seen, just as you might expect.

However, the pulse of this setting (designed by 6-time Oscar nominee Patricia Norris) is driven by the history of that year and season. Through ever-present imagery, intrusive car radio audio, and background television broadcasts, this movie is periodically narrated by the news of failing banks, Wall Street collapse, Republican opposition, and the hope and change of the winning Democratic President of the day. In a mob movie such as this, our characters are acidic and cynical to these new tough economic times and refuse to cater to changes in business. This stark and ballsy setting and stance is, without a doubt, one of the strongest elements of the film.

The plot follows various levels of those aforementioned f–k-ups. At the absolute bottom rung of the ladder are a pair of released criminals, the well-intentioned but lonely Frankie (Scoot McNairy of Argo) and his junkie trainwreck of a friend Russell (professional movie villain Ben Mendelsohn). They are talked into a job by local crime wannabe Johnny Amato (Vincent Curatola from The Sopranos) to hold up and rob a mob poker game run by made man Markie Trattman (Goodfellas legend Ray Liotta). Since Markie admitted to robbing his own poker game the same way a few years back, Johnny thinks all the blame will travel right back to Markie, leaving him and his boys clean and set. 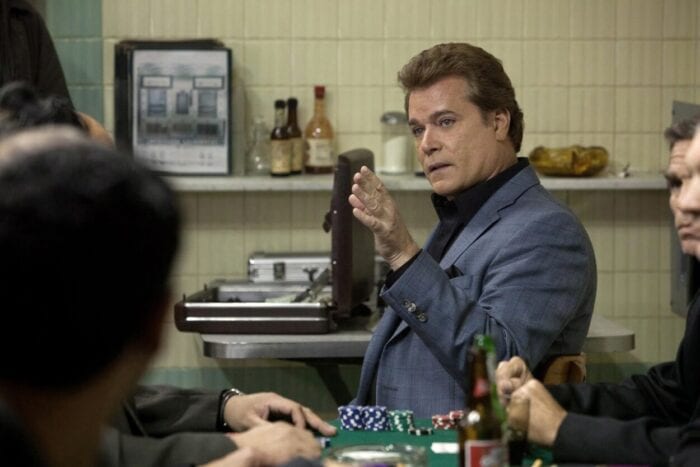 When the heist goes down, the mafia higher-ups are alerted afterward that the game has now been hit twice. They just can’t stand for that to become a regular precedence or occurrence. To deal with the situation and find those responsible, they send their unnamed spokesman (Oscar nominee Richard Jenkins) to seek out Jackie Cogan (Pitt). With a nearly WWE-esque entrance set to “When The Man Comes Around” by Johnny Cash, we meet this ultra-focused and driven mob hitman and enforcer whose specialty is cleaning up messes and loose ends. The rub is that, due to the shifting economy, business isn’t going to go as easily (or as profitably) as it used to. Nevertheless, once Jackie gets involved, people are going to die, and Killing Them Softly follows that process and pursuit.

The lead performance from Brad Pitt is the peak of Andrew Dominik’s film. Pitt extended his legend of cool and screen presence with this razor-sharp character of tough talk and tough actions to back it up. As the least f**ked up of the f**k-ups, Jackie’s still willing to get his hands dirty while still cynically discussing the brutality and emotion of his work. This is the polar opposite to his cop in Se7en from 23 years ago. That cop character was a young, short fuse of nobility and harsh reaction, where this hitman in Killing Them Softly is a slow burn of experience, focus, and analysis. He’s an absolute blast to watch.

After Pitt, things digress a little. The flawed gangsters are all fine, between a brief Sam Shepard appearance and the cross-hairs on Ray Liotta. Our bumbling burglars of McNairy and Mendelsohn give us great banter and point-of-view with Mendelsohn nearly stealing the show as the messy junkie. The weakest link is the late James Gandolfini, who plays one of Jackie’s former partners that is brought in to help with the job. With his own billiards rack of clanking issues, the movie nearly grinds to a halt when he’s around in two long scenes. While those portions of the story help give us some insight into Jackie’s character, they take away from the real pursuit. More Richard Jenkins, whose pencil-neck mafia messenger was a better foil for conversation with Pitt, would have been a welcome hindsight revision.

Still, Andrew Dominik deserves plenty of compliments. His re-teaming with Pitt after the 2007 western The Assassination of Jesse James by the Coward Robert Ford made for a bounce-back towards the gritty stuff of his earlier career that got him noticed by Hollywood in the first place. For more, go see his Australian film Chopper, featuring Eric Bana’s star-making lead performance. With this return to tonal form, the filmmaker put together an excellent, pulpy, and atmospheric crime film with highly interesting and unique characters that broke through the usual mob movie stereotypes.

When Dominik adapted the 1974 crime novel Cogan’s Trade by George V. Higgins to make Killing Them Softly, he gave it gut-punching dialogue worth listening to. He made the dated material more modern and topical with the 2008 financial crisis backdrop. Lastly, Dominik hired better editors (Brian A. Kates and John Paul Horstmann) who resisted endless conversation, and delivered a movie that was half as long (97 minutes) as the sometimes-anguishing The Assassination of Jesse James by the Coward Robert Ford (160 minutes) and one with a title made of one-third the number of words.

The overarching themes reign supreme. There’s no doubt that America was in a terrifically scary flux 12 years ago. With banks closing, businesses failing, huge unemployment, and belts tightening everywhere, 2008 was the beginning of some really hard times that we haven’t climbed out of to this day.  Killing Them Softly uniquely gives us the mob lens to that time period. Remember, the Mafia is a multi-million dollar corporation too. Even they took their hits. 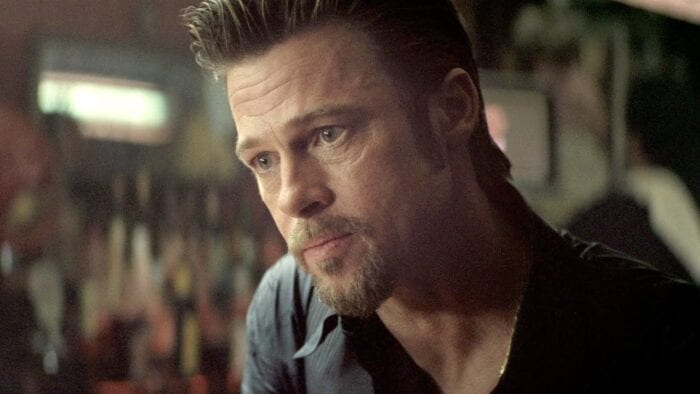 There’s a dynamite line from Pitt’s lead that states “America’s not a country. It’s a business.” Jackie Cogan remembers when business was different before the whole country got sideswiped by a depression. The Cogan character constantly compares the past to the present and knows that for not just him to survive, but the bigger picture as well, business has to continue. This quote and his reaction to observing the 2008 election happening before his eyes. Even through the perspective of the criminal, the notion rings true. As long as money is at stake, criminally or legally, there will always be business to be had in this country.

To bring it all back to the start, this movie is still dedicated to when f**k ups f**k up. We witness crime and its internal consequences in Killing Them Softly. We see two bottom-level guys pull off a job that sets them up, but fails to springboard them away from trouble. We see the mid-level guys lie, cheat, and steal from each other just to get ahead while never really getting ahead. Finally, we see how that system is governed and how a guy like Jackie can be either the wrench in the wheel or WD40 to keep it turning.