One of the most surprising video games I keep going back to this year is the charming and addictive Mario + Rabbids Kingdom Battle. Released on Nintendo Switch back in 2017, it didn’t come across my radar until the excitement of Animal Crossing: New Horizons hit my house, meaning an extra MicroSD card was in order to make room for both Animal Crossing and Mario Maker 2, which—at the time—looked like the single game that would eat away my entire summer. Instead, anytime I find the Switch in my hands, even with the intention of losing myself in several hours of Mario Maker, it’s Kingdom Battle that gets my attention. This game is so vividly weird and refreshing, a perfect blend of concepts that were primed for synthesis, and yet still an unexpected joy. While my creative instinct still lures me to Mario Maker, new levels are just going to have to wait.

Mario + Rabbids Kingdom Battle follows in the tradition of tangential Mario titles that more or less serve to introduce a niche genre to the broader Nintendo audience. Think back to Super Mario RPG, but with a similar three-dimensional tactical battle system like Final Fantasy Tactics. Fans of the Tactics series likely imagined a Mario title in that vein would be too good to be true, and in fact that felt confirmed upon realizing that Mario shares the title with the Rabbids. Totally unfamiliar with the Rayman series or its off-shoot of minion-like critters, I worried it wouldn’t feel “Mario” enough. In other words, I was afraid the Rabbids would put me off of the game entirely, but turns out that is definitely not the case. While Kingdom Battles does not make any substantial contributions to Mushroom Kingdom lore—should anyone care about that sort of thing—the Rabbids bring a refreshing irreverence to the Mario universe, invading Peach’s castle and running rampant leading the heroes on a chase throughout four worlds with nine battles each.

The game leans into the chaos of blending franchises, propelling the battles with bombastic energy. The playable Rabbids are just wearing Mario Bros. cosplay anyway, so the final lineup includes Mario, Luigi, Peach, and Yoshi as well as their rabbit counterparts, each with a unique skill tree and role in battle. Mario takes on the party lead role, while Luigi is better on defense, Peach is a healer, Yoshi is a long-range support fighter, and the Rabbids tend to be more balanced variations. It makes them easier to fit into the party, but each character is worth bringing into the battle now and then. For the first half of my playthrough I neglected both Luigi and his rodent doppelganger, only to discover they are extraordinarily useful in situations that require more planning. Luckily, the game also offers new challenges for previous battles through the Washing Machine feature, which means going back and leveling up your party if you hit a roadblock doesn’t end up being such a chore.

The levels are divided by platform puzzles that certainly slow down the pace of the game, and often incentivize taking a break, only to come back and feel completely lost by the labyrinthine design. The graphics make use of a heavy depth-of-field, which gives the game an overall table-top war-game vibe and—like most Switch games I’ve encountered—really benefits from upgrading to the dock and TV setup. The platforming puzzles also make up for the less-complex leveling system some RPG fans might crave, trading menu time for winding around levels and collecting coins and collectibles. Whatever my hesitation toward the Rabbids initially, I can confirm that the 22 card in-game collectible tarot deck won me over. 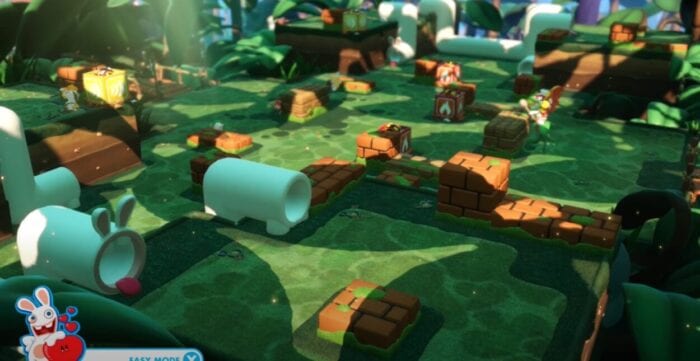 I keep thinking about how unfamiliar it is as an entry to the Mario franchise, especially as the characters wield guns and explosives so openly, even from a series with classic villains like Bullet Bill and Bob-Omb. The imagery is somehow less violent when you can knock down a speeding bullet with a well-timed jump, but a tactical game brings a kind of realness to weaponry that 2D platformers lack. Kingdom Battle balances via a wide assortment of goofy weapons with bonus effects like “honey” or “ice,” and clever designs that reference Mario villains, or cartoonish violence at worst. The variety is nice too; each character gets a primary and secondary weapon, and there are plenty of upgrades to choose from, so leveling and upgrading doesn’t feel so linear despite a relatively simple skill tree.

Okay, I did some digging and it appears that Ubisoft Milan were at least wary of giving the Mario Bros. tactical weaponry, but Miyamoto backed their creativity and vision and Nintendo was on board with nearly every crazy idea as long as it served a purpose. No clue on whether it managed to break into new markets though. The nine year old who shares my Switch lost interest through the admittedly-long and unskippable intro movie. His loss though, as this game is ridiculously fun. Even as I sit down to write about it, I just want to keep playing it, and at nearly three-quarters of the way through, the difficulty curve has been steady without getting dull, and despite its juvenile vibe it’s still a user-friendly yet mechanically-dense strategy game. 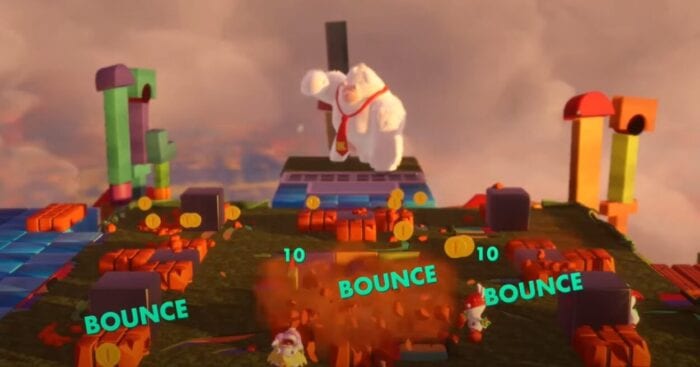 And that’s why this is the kind of game that critics rave about, and gamers generally adore. It is packed with overly-merchandised characters and unnecessary collectibles that do not distract too much from the core gameplay. This is where it deviates from something like Mario RPG, which is built like an introductory course to role-playing games. Kingdom Battle occupies the same territory, though so far I think Kingdom Battle has given me more strategically challenging situations to work through than Final Fantasy Tactics, where the game drops a handful of overpowered characters into your party during the second half, rendering strategy meaningless. Kingdom Battle does no such thing, and in fact it is one of the few games I can recall with such steady and linear difficulty. No battle feels redundant, and if they aren’t introducing a new villain directly, they are still proposing new challenges. Some players might find the puzzles and collectibles tedious, especially as they become necessary to some degree to move forward, but then again, if the game was a series of battles back to back I’d admittedly have a harder time putting it down.