Every morning, thousands of YouTube subscribers watch David Lynch look over the steam rising from his fresh cup of coffee on his custom-built desk and describe the weather via the window of his dusty art studio.

“Good morning,” he says, then announces the current date and temperature in both Fahrenheit and Celsius before finishing with an optimistic forecast in his folksy, blended Northwestern accent. “Blue skies and golden sunshine,” he says, “all along the way.”

Lynch began uploading his daily forecasts to his YouTube channel back in May 2020, and they’ve consistently gone up every morning during the long months of the COVID-19 quarantine. He’s also uploaded a few videos showcasing some of his ongoing projects, mostly furniture these days. In August, he began a daily series drawing a number from a jar he painted over the summer.

Pandemic lockdown is giving David Lynch a chance to make a very specific kind of film, one that documents a shared experience while also expressing the exact qualities of hard work and daily routine that Lynch has so often shared with the public. The videos are brief and sweet, rarely deviating from the same shot and format, but all together, they show the slow changes that are only captured over extended periods of time. If a timelapse is a single shot taken over and over, Lynch’s weather report is a three-dimensional timelapse of a recurring scene. The idea is to do the same thing every day at the same time. The beauty comes from the changes that are unavoidable.

Lynch produced weather reports like this in the mid-2000s, lending his auteur bona fides to the burgeoning world of viral online videos. His early prosumer experiments eventually evolved into Inland Empire. So it is no surprise to see him revive the practice during a time when the entire world has been (hypothetically) hunkered down at home, finding new creative projects to keep minds occupied amid all the gloom. Lynch and his trademark optimism are a welcome respite, especially since his work is known for finding tranquility within chaos.

But there is a distinct contrast to these newer quarantine videos when looking back at the ones from before. Lynch is older, of course; his hair is white, slicked back, and overgrown, and he speaks more deliberately now, taking time to look over his shoulder and absorb the atmosphere before finishing with a smile and wave. Throughout most of his career, Lynch wore a long-sleeve white shirt buttoned all the way to the collar. These days his shirt is solid black, and in August, he began wearing dark-tinted glasses. Notably, his delivery back then was quicker and sharper, whereas these days he is more deliberate, taking time to turn over his shoulder and squint at the air, making sure to breathe in the moment before offering his honest description, which rarely changes. “Once this fog clears,” he predicts, on days when the sky might not appear as bright and blue as he’d like, “we should be having blue skies and golden sunshine all along the way.”

In some ways, the weather report falls into the same confrontational category of his work that defies the Hollywood proclivity to shy away from aging, a theme wholeheartedly embraced in Twin Peaks: The Return. It also earned sharp criticism from late author David Foster Wallace over Richard Pryor’s cameo in Lost Highway. It certainly makes the project undeniably Lynchian, not unlike how the infamous Roadhouse sweeping scene fits into larger themes of living life in balance.

In the past, Lynch advised that routines are important to the creative process. He has repeated the story of his seven-year daily milkshake ritual from Bob’s Big Boy and is as known for his vices of coffee and cigarettes as he is for his regular transcendental meditation practice and quinoa consumption. Lynch maintains that the mundane circumstances that arise out of consistent habits are akin to a meditative state, providing opportunities to explore creative ideas. It also serves as a method of grounding, important for an artist whose work regularly explores the darkest sides of humanity. 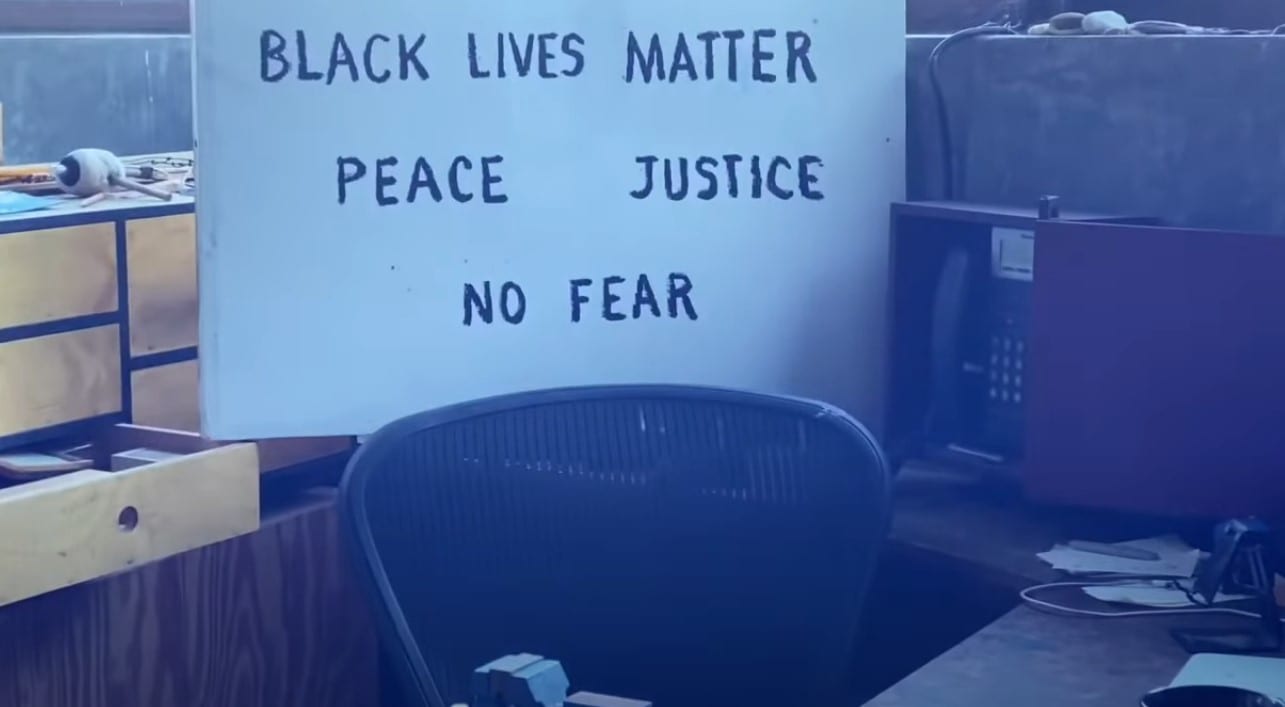 With the weather report, Lynch is doing little more than offering a tiny bit of optimism each day to a grieving world. At first, Lynch presents rarely more than just the temperature and a brief forecast. But he is also inviting us into the process of establishing healthy routines. Individually, they might not be very noteworthy, but as an extended take of a single scene, replayed every day, it provides a timelapse of the year and its tumult. In June, after Minneapolis police murdered George Floyd and Black Lives Matter protests spread around the globe, Lynch displayed his solidarity. As the wildfires in California crescendoed, Lynch’s demeanor grew noticeably irate. “I’m making a list of all the good things happening in the world,” he says in the video published on September 13. He taps the blank page at the top of the pad and says “I’m still thinking,” before dropping the pad back down on the desk.

After that despairing report, Lynch followed up the next day with a brief message, clearly moved by the positive reinforcement from his online fans to his previous report. “What a great bunch you all are, those of you who come each day to check out the weather. I want to thank you for being so great.” If the reports are a collage of the filmmaker’s work, it’s like seeing a painting react in real-time. After all these years, David Lynch is finding new ways to pull audiences into his world.