‘The West Wing: A Reunion to Get Out the Vote, In Hartsfield’s Landing’ is now available on Audio, read by author Cat Smith, exclusively for our Patreon supporters. For just $3 a month you will have access to our full library of Audio content, plus three new uploads every week. To sign up visit our Patreon page: https://www.patreon.com/25YL

”We understand that some people don’t fully appreciate the benefit of unsolicited advice from actors. We do know that. And if HBO Max was willing to point a camera at the ten smartest people in America, we’d gladly clear the stage for them. But the camera is pointed at us. And we feel, at a time like this, that the risk of appearing obnoxious is too small a reason to stay quiet, if we can get even one new voter to vote.” 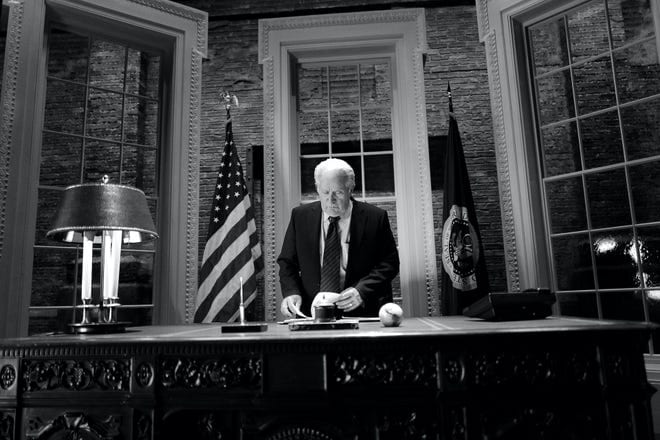 Bradley Whitford kind of sums it up, right at the off. It’s 2020, the Presidential election draws ever nearer. Everyone is doing what they can, and finding weird and creative ways to do it, thanks to COVID. It seems like every four years, the cast of The West Wing has a mini-reunion of sorts, getting together for voter awareness ads, or promotion for the Democratic party, or the like. This year, when the stakes have never been higher, they kicked it up a notch. The new streaming service HBO Max got almost the whole cast back together for a staged reenactment of the Season 3 episode “Hartsfield’s Landing”. For the first time in 21 years, it wasn’t Martin Sheen, Allison Janney, Bradley Whitford, et al talking to us—it was the Bartlet Administration, and oh my gosh, how I have missed them.

It was clear that they were very careful. Nobody was going to screw around with Martin Sheen’s health (even without his fictional counterpart’s pre-existing condition, multiple sclerosis). The “episode” was filmed in the empty Orpheum Theater in Los Angeles, and they showed plenty of behind-the-scenes footage with crew members wearing face shields. It’s done like a play, beautifully lit and staged (honestly, I would kill for more episodes done this way), and narrated by Emily Procter. She played Ainsley Hayes on the show, and while she’s not in this episode, it’s lovely that she could be involved in this way. “Hartsfield’s Landing” was never one of my favourite episodes (nothing wrong with it, there are just so many others I love more), but this may bump it up a little in my esteem. The opening credits theme is played acoustically by Snuffy Walden himself, with his guitar, backed by a small string section. I wept.

It was a good choice of an episode, really. It’s a bottle episode, taking place solely in the West Wing, and it has to do with an election. There’s a small town in New Hampshire called Hartsfield’s Landing, population 63, they get to vote early, and bizarrely, they have accurately predicted the winner in every Presidential election since Taft. The more superstitious care about Hartsfield’s Landing because they’re superstitious, while people like Josh Lyman (Bradley Whitford) care because once they vote, for the next several hours, the press won’t have anything else to talk about, and Josh wants the press to be talking about his candidate, the President. Meanwhile, there’s a thing going on between China and Taiwan, and in his spare time, President Bartlet is running around the West Wing playing multiple chess games with various people.

It’s a glorious reunion. Underlying the truth of the acting and the plot and all is how tickled they all are to be doing this again, to be back together. Year before last, I had the great good fortune to be involved with West Wing Weekend, the first ever West Wing fan-run convention. We had a few supporting cast members as guests, and I saw with my own eyes how much fun they had being together again, reliving those years—and this time, they were literally reliving some of it. Just amazing.

I knew they had gotten the main cast back, but I was astounded to see how many of the smaller, supporting actors were back. Not James Hong, sadly (I don’t know why, but the man is in his 90s and I couldn’t blame him if he simply didn’t want to risk leaving his house during the time of COVID), but there were Ed and Larry, recognizable faces from the press corps, and Ana Devere Smith as Nancy McNally.

The biggest missing piece in the original team is obviously left by the late, great John Spencer. I had originally hoped that Aaron Sorkin might step in and play Leo McGarry himself, but he had other ideas, and got Sterling K. Brown to come play the Chief of Staff. Apparently Sorkin is a big fan of Brown’s (me too), and has said that if he were to reboot The West Wing, Brown is who he would want to play the President. I’d be fine with that, and I was fine with him as Leo. He’s not settled into the Sorkin language, but given time, I’m certain he could be. I thought it would be a little trippy to see him not be President Bartlet’s peer, age-wise, but strangely, I found he had it the most in that brief moment toward the end of the episode when it was just him and the President together, being friends. Brown is much more animated when he’s just talking—it’s like he was a little intimidated being Leo, or overcompensating a bit of Leo’s stoicism…anyway, I liked him a lot, and I felt like I could have loved him if he had gotten more time with the role.

Allison Janney keeps looking more and more like the ’50s movie star she is described as early in the series, just stunning. And someone should tell Rob Lowe there is a statute of limitations on handsome, because it just isn’t fair, okay? Marlee Matlin isn’t in the episode, but she shows up to do a fun sketch with Whitford about voting fraud, and she looks about five minutes older than she did on the show. Stop taking all the gorgeous, people. Or don’t, because you deserve it.

During the act breaks, where the commercials would be, they have guests. Michelle Obama and Bill Clinton talk about the need to vote, and so does Samuel L. Jackson—of course, when Jackson does it, it’s an implied verbal smackdown in his inimitable style. “Our politics today are a far cry from the romantic vision of The West Wing, but it’s also a far cry from the vision that’s in our heads and in our hearts, and to change that, you have to vote.”

Dule Hill and Elisabeth Moss essentially paraphrase CJ’s “rock the vote” speech to reach out to young voters (though CJ didn’t use the words “lit AF”), and Hill comes back later with Brown to make an impassioned appeal to the Black community. And no West Wing special would be complete without an appearance by uberfan Lin-Manuel Miranda. He is his endearing self, supports the cause, and lets them poke just enough fun at him to let us know that he knows it isn’t about him. “Try not to rhyme,” says Janel Moloney.  “It can get irritating.”

For me, the whole point of the episode is Toby (Richard Schiff) and the President. When we last left our heroes, Toby had called President Bartlet out on some of his behavior and political choices, and how it relates to his feelings toward his late father, who had been a bully. A line was crossed, and they had fought. Now, the President presents Toby with a chess set and an invitation to revisit the conversation. “You’ve already apologised. Let’s get back on the horse.” “Neither of us ride horses.” “That makes it more likely we’ll learn something.” To me, this right here is what makes a leader. They had a fight, he’s the guy in charge, could win by default, but no, they are going to work this out for real.

In the fictional election, the guy who gets the Republican nomination is a guy named Rob Richie, and looking at him now, it’s almost laughable how close James Brolin got in his portrayal to the current occupant of the White House—though really, our guy makes Richie look educated. Richie isn’t in this episode, but I keep thinking this is the real reason they picked “Hartsfield’s Landing”. Between Toby and the President, they pretty much spell out what a President should and shouldn’t be. President Bartlet says “What I can’t stomach are people who are out to convince people that the educated are soft and privileged and out to make them feel like they’re less, then, you know, ‘he may be educated, but I’m plain-spoken, just like you’ especially when we know that education can be a silver bullet, it can be the silver bullet, Toby! For crime, poverty, unemployment, drugs, hate…” And later, Toby’s response is “Make this election about smart and not. Engaged and not. Qualified and not.” Campaign rhetoric? I only wish this was a debate that was being kicked around anywhere near the current White House.

The “episode” ends with footage from the actual episode, of the votes being counted in Hartsfield’s Landing, and then credits roll to a live performance by the Avett Brothers, because why not. And what effect will this ultimately have, apart from being the ultimate mitzvah for West Wing fans? I don’t know. The more cynical part of me always thinks of these things as preaching to the choir—I knew I was voting, I knew how I was voting, and watching this didn’t sway me one way or another. The more cynical part of me would also be lying if I didn’t roll my eyes just a tiny bit every time they used the slogan “we’re America, we’re good at this”. But this isn’t the time for cynicism. What The West Wing gave us was a sense of hope through its idealism, and we need that now, in this, our darkest timeline. Watch the episode, participate in the process, have hope. Decisions are made by those who show up. Vote.