Making sense of the world is one of the defining themes of David Byrne’s music. Lyrics explicitly talk about things making or not making sense appear in his Talking Heads songs “Making Flippy Floppy,” “Girlfriend is Better,” and “Here” from the American Utopia studio album. Sometimes, as Byrne recounts during the show, he examines the idea of sense and meaning in different ways, like in the song “I Zimbra,” which intentionally uses nonsense lyrics.

Byrne’s new concert film on HBO Max, directed by Spike Lee, documents his Broadway show also called American Utopia, is the latest attempt to try to make sense of some pretty big things: himself, America, and the human condition.

Byrne frames the show in his first monologue, which follows the opening song “Here.” While holding a plastic model of a brain, Byrne recounts that he had recently read that “baby’s brains have hundreds of millions more neural connections than we do as adults and that as we grow up, we lose these connections […] What happens is we keep the connections that are useful to us, and yes, there is a process of pruning and elimination and we get rid of a lot of the others. Until the ones that are left define who we are as a person, who we are as people, they define how we perceive the world, and the world seems to make some sort of sense to us.” 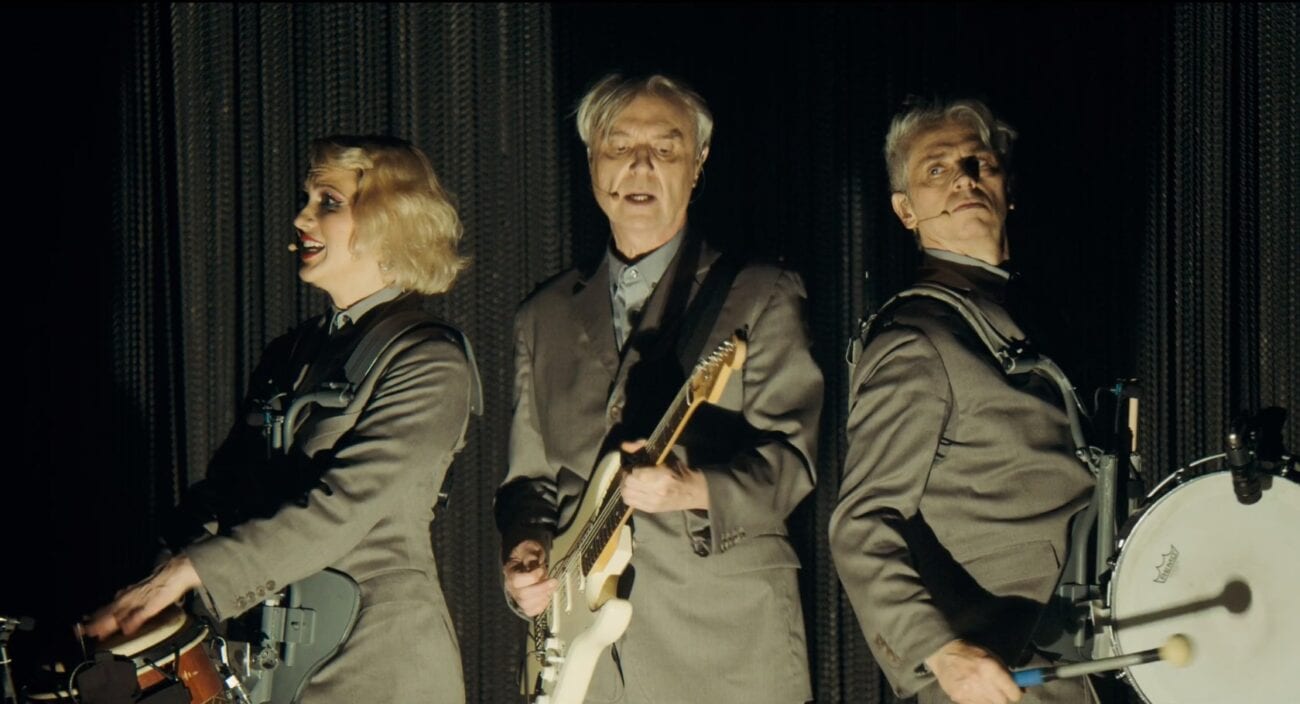 Despite the title, only half of the songs from the original studio album make it into the Broadway show [1], with the others coming from Byrne’s Talking Heads and solo catalog. In general, the “hits”—”This Must Be the Place (Naïve Melody),” “Slippery People,” “Once in a Lifetime,” “Born Under Punches (The Heat Goes On),” and “Burning Down the House”—are relatively straightforward performances. However, I can’t help but think of the revolutionary implications of performing “Burning Down the House” in the context of a political concert.

The lesser-known songs, including the ones from the American Utopia studio album, are generally more uniquely staged: “I Dance Like This” starts with the performers laying on the ground as if shot and ends with strobe lights, “I Should Watch TV” (originally from Love This Giant) begins with a cathode tube television lighting effect and a includes a backdrop image of Colin Kaepernick, “Blind” is lit by harsh yellowish light, and “Bullet” recalls the staging of “This Must Be the Place (Naïve Melody)” in Stop Making Sense (1984, directed by Jonathan Demme) by being lit by a single work light lamp.

The most powerful song in the show is undoubtedly “Hell You Talmbout” which Byrne covers from Janelle Monáe. The song is simple in structure: the musicians sing “hell you talmbout,” and then say the names of victims of police violence, accompanied by chants of “say his/her” name. Pictures of the victims accompany each name that is chanted, often held by their family members. I suspect that the images were one of Spike Lee’s contributions, as it is similar to the end of Malcolm X, where school children stand up and declare “I am Malcolm X” into the camera. 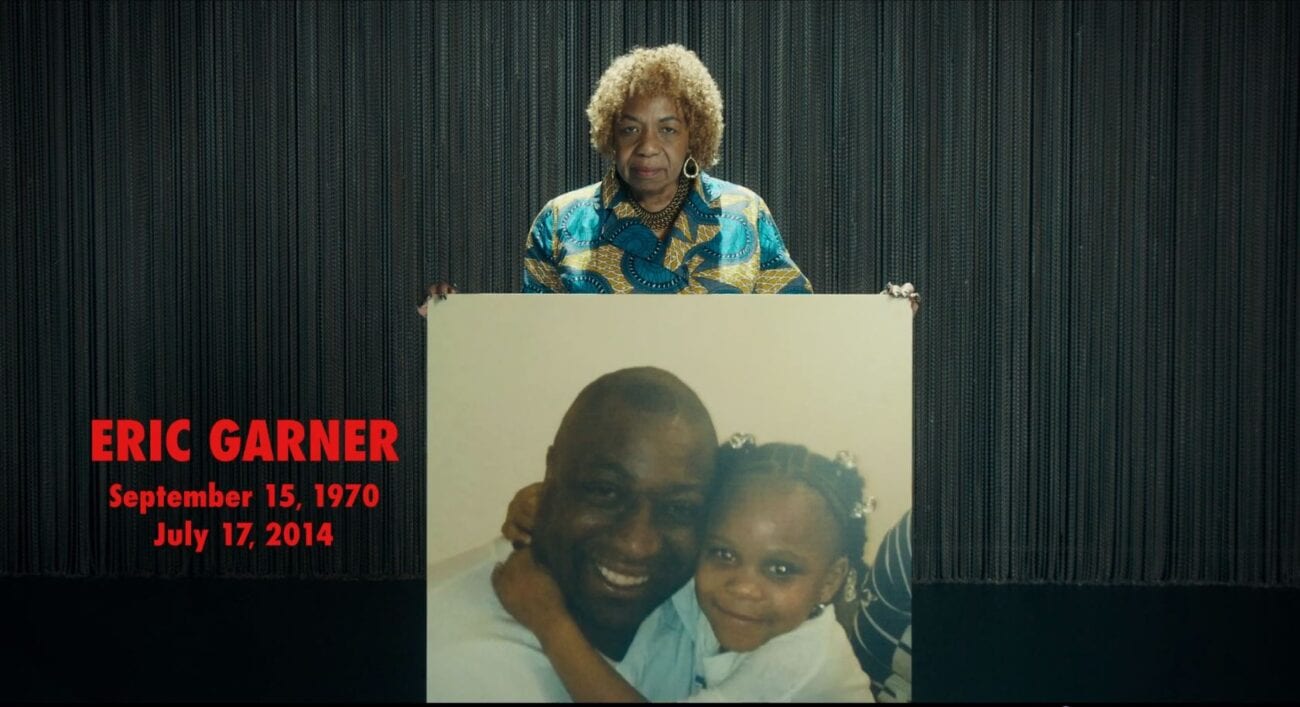 Whether it wants to or not, the film demands comparisons to Byrne’s other concert film, the legendary Stop Making Sense that was produced while he was still with Talking Heads. It is widely considered to be among the greatest concert films of all time. Stop Making Sense is electrifying and infectious, with Byrne at points sprinting around the stage. American Utopia emanates much different energy—more confessional and stripped-down. The two shows are both joyful, but they are different kinds of joy: Stop Making Sense is an exuberant joy that comes with performing at a high level and enjoying what you do, while American Utopia is the joy of community and hope.

American Utopia also has a different shot vocabulary than Stop Making Sense. The introduction of god’s eye overhead shots, shots of the audience through the band, and—while I don’t have a full accounting of selection—it seems to depend more on wide angles than closeups. Paradoxically, the shot vocabularies of the respective films contrast with each concerts treatment of space.

Where Stop Making Sense featured a sprawling setup across the entirety of a large open stage, American Utopia’s design is sparse. Musicians maneuvere within a much smaller frame in “curtains” formed by dangling chains while carrying their instruments. American Utopia’s treatment of space contributes to the more intimate nature of the show, while its shot selection highlights and elevates the other performers.

The audience plays a much different role in American Utopia than in Stop Making Sense. The audience is peripheral in Stop Making Sense—there are few shots of them and they are only rarely addressed. While the audience helps to provide atmosphere and stimulate the musicians, I don’t think it would have been a fundamentally different film if the band had performed in front of an empty theater: the focus is on the musicians. On the other hand, American Utopia is virtually unimaginable without an audience—Byrne addresses them between most of the songs, there are frequent shots of them from the stage, and the show ends with Byrne and the band marching through them. Byrne even admits to intentionally deemphasizing the production elements to put more emphasis on the performers and welcome the audience into the production, saying:

When I started to think about the show, I realized that, well, what we humans like looking at the most is, yeah, other humans […] So I thought about the show and wondered, ‘what if we could eliminate everything from the stage except the stuff we care about the most? What would be left?’ Well, it would be us, us and you, and that’s what the show is.

The involvement of the audience reflects the broader aims of the films: where Stop Making Sense is a film about the Talking Heads, American Utopia is about everyone. To paraphrase “Road to Nowhere,” which closes the show, Byrne is asking the audience—both in the theater and watching at home—to come along and help him sing the song.

I felt a true catharsis watching and listening to the final song of the show, “Road to Nowhere.” Byrne said of the song, “I wanted to write a song that presented a resigned, even joyful look at doom.” This quote reminded me of a similar sentiment from the band Green Day, who said that of their recent album “the best stuff takes your hand and helps you dance through the apocalypse.” The juxtaposition of light and dark, joy and doom, dancing and apocalypse, is most evident in the songs from the American Utopia studio album.

The seemingly cheerful “Every Day is a Miracle” features the lyrics “Every day is an unpaid bill/You’ve got to sing for your supper.” It describes how little the universe cares about the accomplishments and activities of humanity; “Cockroach might eat Mona Lisa/The Pope don’t mean shit to a dog/And elephants don’t read newspapers). In “I Dance Like This,” Byrne contrasts the peaceful verse with science fiction and dystopian lyrics, “In another dimension/Like the clothes that you wear/A mighty mighty battle/Sproutin’ illegal hair/A fitness consultant/In the negative zone/Wandering the city/Looking for a home” and an aggressive chorus.

Byrne addresses the opportunities these incongruous songs present for radically different interpretations without changing the songs by recounting a performance he saw of “Everybody’s Coming To My House” by a high school choir. Byrne’s version is about losing your sense of control and familiarity in a place that you used to feel comfortable, “Everybody’s coming to my house/I’m never gonna be alone/and they’re never gonna go back home”, as you would if you had an uninvited guest that you couldn’t get to go away. It’s something that many people felt after the 2016 election, myself included. However, Byrne recounts that the high school choir’s version “seems to be about welcome, inviting people over, inclusion.” Where the singer in Byrne’s performance longs to reclaim control, the high school choir uses the song to celebrate the joy of being with other people. 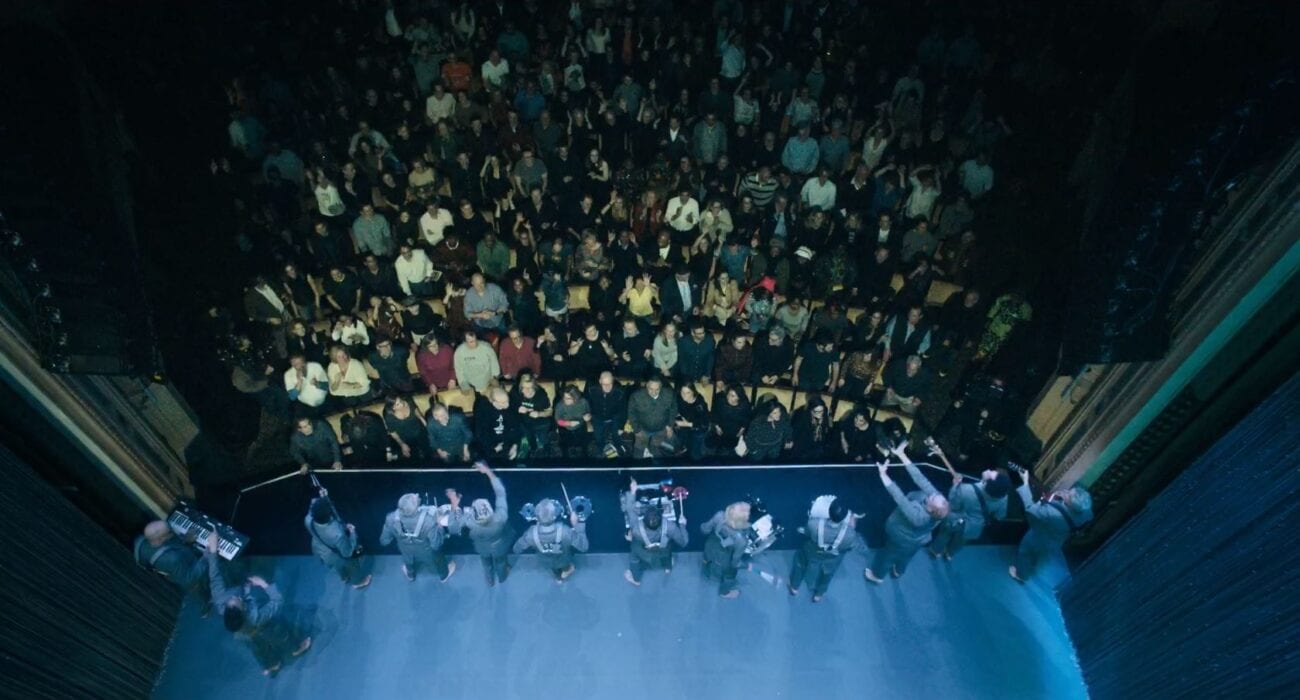 I’m writing this essay before the election, but it won’t be published until after voting has stopped—whether that means we’ll know the outcome or not by that time is another story. Like many people, 2020 has felt like an apocalyptic year to me, compounded by growing anxiety as the election approaches.

I wonder if American Utopia will affect me differently in a post-Trump world, whether that world is months away or years. Many of the issues that Byrne examines—gun violence, police brutality, poverty, and immigration, to name a few—will be with us for a long time, but the way things are now, any chances for even marginal improvement feel like they’re a lifetime away. Hearing Byrne and the show’s cast sing about humanity in an inhumane time is cathartic and inspiring. I hope that American Utopia continues to fill me with the same feelings of hope, unity, determination, and curiosity as it does now, no matter the outcome of the election.

[1] Amusingly considering the Spike Lee connection, “Doing the Right Thing” is one of the omitted songs. Also missing, “Making Flippy Floppy” from the Talking Heads album Speaking in Tongues, featuring the timely but maybe on-the-nose lyrics “Our president’s crazy/Did you hear what he said?”